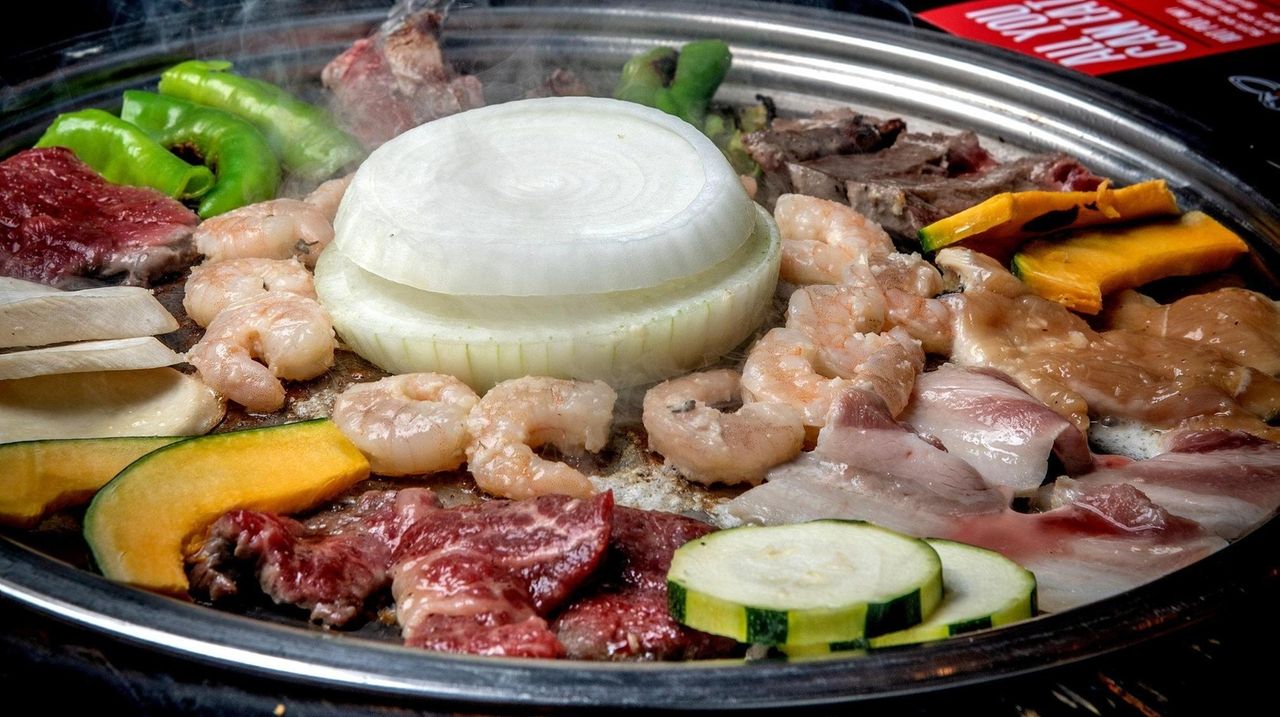 After nearly a year of not seeing each other during the pandemic, Newsday's Feed Me team reunited at JBBQ & Shabu Shabu in Bay Shore to try out the cook-your-own-food restaurant. Credit: Newsday / Chris Ware

"Shabu … what, now?" said the voice on the other end of the line.

Savvy readers will detect that the above confusion was not genuine, that it was instead an odd attempt at who’s-on-first kabuki by my friend, driven by his stubborn wish to avoid departing voluntarily from his culinary comfort zone. Thus did I drag him kicking and screaming to Bay Shore. Thus did he have the time of his life.

"What do the Japanese know about barbecue?"

"Every culture knows about barbecue."

She had a ball too, and so will you, I bet. After all, much of the rest of the Island already has fallen in love with JBBQ & Shabu Shabu, as evidenced by the owners’ plan to open two more JBBQs later this year, in Smithtown and Commack.

People have been boiling food in hot pots ever since there was food, pots and heat, of course, but Japan’s spin on the practice is of more recent vintage. Shabu-shabu, a dining style that first gained popularity in 1950s Osaka, is an onomatopoeic depiction of the sound made when someone cooks thinly sliced meats/vegetables/you-name-it by swishing them around in a pot of boiling broth. That someone is you, which is no small part of shabu’s appeal.

After the commotion of the past year, you may be forgiven for forgetting that dining out is about more than food and convenience, that it is also about fun. Shabu-shabu will remind you. In Japan, diners gather around a single large pot for shabu while, say, joking about "The Way of the Househusband" and other manga classics. In a nod toward Western individualism, however, each diner at JBBQ is offered the option of choosing an individual pot, broth (there are five) and heating element. This does little to diminish the merriment. Soon you’ll hear more splashing than a water park on the first day of summer as you and your friends happily dunk and swish bits of pork belly, quail eggs, lobster balls, beef tongue, bean curd sticks, or anything else on the restaurant’s 30-plus list of submersibles.

Yes, shabu boils down to a 90-minute all-you- can-eat gorge-a-thon, but at least it masquer-ades as festivity, especially at JBBQ, where bright red and yellow walls and faux sake barrel stools are a whimsical complement to the gleaming stainless-steel chimneys suspended above each table. (Ventilation is not a problem with shabu, but Japanese barbecue can be a smoke bomb.) Each requires servers to deliver plate upon plate of uncooked meat and raw vegetables, but yakiniku demands shifting your attention to a griddle at the center of the table, greasing it with butter and using tongs to transfer thin slivers of pork and rib eye to it for however long the house recommends. (Next to every item on the menu is a suggested cooking time.)

Unlike a teppanyaki steakhouse, there’s no man in a tall red hat doing the work for you, no knife-juggling or joke-cracking, and that’s not the only great thing about barbecue at JBBQ. The wide selection of grill items should embolden you to throw caution to the steak and short rib winds. Why limit yourself when there are green mussels and cubes of fish cake for the asking? You know what a good sear can do for a porterhouse. Now watch as it coaxes slices of pumpkin or eggplant, shiitake or king oyster mushrooms, to release new flavors, nutty notes, umami accents.

At JBBQ, diners can opt for shabu-shabu, yakiniku, or both, and there is plenty of staff on hand to talk you through any difficulties encountered. As such, this place can be a fabulous gateway to adventure of the choose-your-own variety, not to mention a great night out with friends. If you’ve friends who are unmoved by this excitement, or prefer to take the easy route, point them to JBBQ’s kitchen-made versions of gyoza, edamame, shumai, spring rolls and more. And if you’ve friends for whom even that is too much work, point them toward the door and get new friends.

Explore the new issue of Feed Me MagazineTake on the ultimate Fire Island foodie crawl, grab a bite at one of LI's marinas and discover the charming village that's perfect for summer dining.