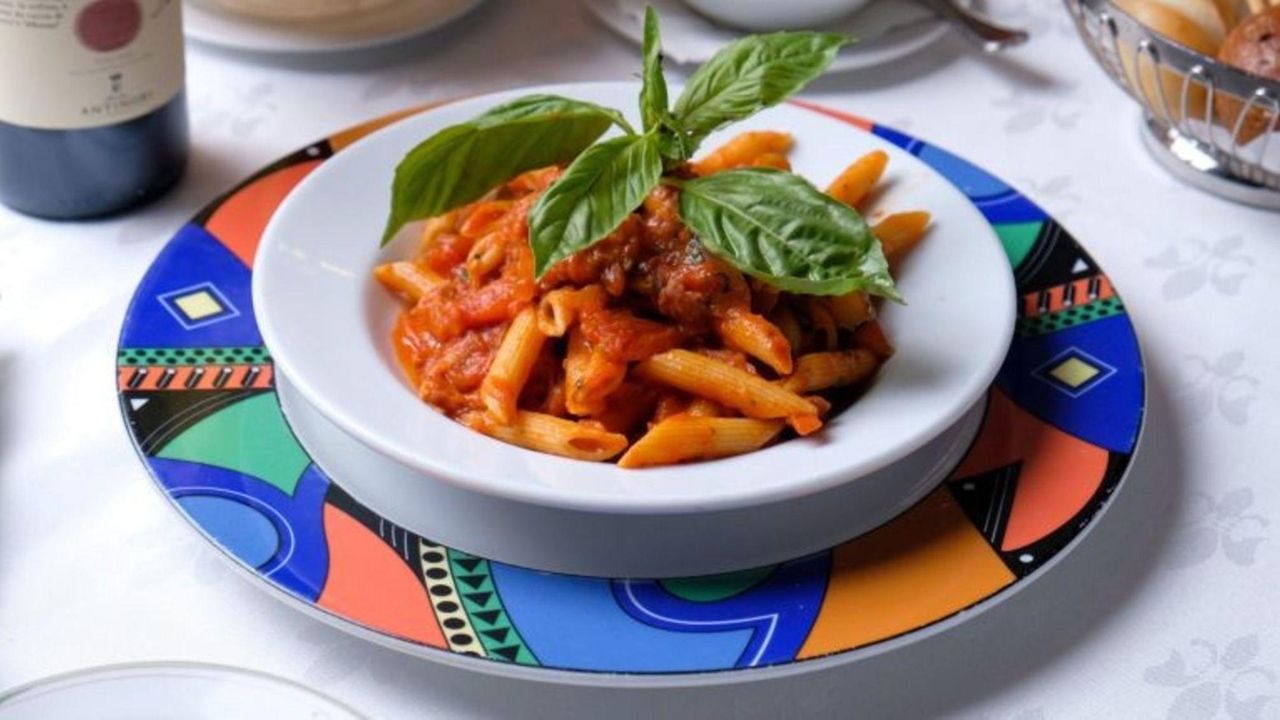 Stresa Italian restaurant in Manhasset was sold in January to Antonio D'Anna and his sons -- Roberto, Tommy and Nick, who's the chef. On Friday, Nick and another chef, Jose Corea, cooked up one of the restaurant's most popular dishes, penne all'Amatriciana, featuring a Roman sauce with pecorino and pancetta, topped with basil leaves. Credit: Daniel Brennan

“The past is a foreign country; they do things differently there,” wrote novelist L.P. Hartley, memorably opening “The Go-Between.”

He never ate at Stresa.

The classic Italian-continental was known from Day One in 1992 for its gracious manner, abundant flowers, airy souffles and the elegant presence of Giorgio Meriggi overseeing all.

Meriggi and his partners sold Stresa in January. Now, the restaurant, named for the resort city on the shores of Lake Maggiore, is the province of Antonio D’Anna and his sons — Roberto, Tommy, and Nick, who’s the chef.

D’Anna owned the inviting, genial Arturo’s in Floral Park for 27 years. He brings those qualities and his own warm, attentive style to Stresa, along with specialties from the Arturo’s repertoire.

Walk into the dining room of Stresa today and you’ll find the same artwork, the beautiful flowers, the bowl of crudités on ice, a nearly identical menu, and regulars at almost all the packed tables.

D’Anna and family have adopted them. Be assured, they’ll adopt you, too.

One of the criticisms leveled at Stresa was that changes were few and trends ignored. To which patrons might reply, keep your distressed wood and industrial chic, your T-shirted staff and Instagrammania.

Stresa still evokes the finer restaurants of another decade, when you were cosseted in every way, from the extras that appeared at your table to the personal attention that came to be expected. Yes, the past is different. But it can be as present as the day you make your reservation here.

So, nibble on those crudités and grissini, take in the kind of charm that countless new spots find elusive, enjoy being treated exceedingly well.

And order the silky, artful and excellent swordfish carpaccio, glistening from olive oil and accented with a touch of fresh tomato. Or try a special: the torta primavera that was so deservedly popular at Arturo’s. It’s like a hearty wedge of cold antipasti, a cut of pie with layers of crepes, vegetables, cheese, and cured meats that allow you to think spring is here even when there’s snow in the forecast.

The diced Charlotte salad of arugula, endive, asparagus, romaine and roasted peppers in radicchio leaves is as refreshing as it always was. Four-bean soup under a pastry dome stays a staple, along with the lush vegetable soup du jour.

A stuffed artichoke, however, arrives a bit dry; grilled octopus, a little overdone.

But bucatini alla Norma, with eggplant and fresh tomato, stands out, as does penne in a very Roman sauce all’Amatriciana. Porcini mushroom risotto capped with a snowfall of Parmesan comes through creamy and al dente.

Bistecca alla King, a sliced sirloin with onions, peppers and mushrooms was named for the late comedian and Stresa regular Alan King. He’d surely smile after a taste of this one.

Rack of lamb, seasoned with rosemary, is tender and rosy; veal Milanese, marred by a moist, peel-away crust. Red snapper with a slightly spicy red sauce and pristine swordfish steak with a hint of lemon both shine as catches of the day.

Desserts were a showcase in Floral Park and Manhasset. At Arturo’s, the big sweet was a frothy and vinous zabaglione, over berries and ice cream. You’ll find it here, as you did over the years, in all its richness, perfumed with Marsala.

At Stresa, you always could rely on the decadent chocolate cake. You still can. Likewise, ripe fruit tarts.

But the finales most identified with Stresa were Giorgio Meriggi’s airy, puffy, peerless souffles, either chocolate or Grand Marnier. Antonio D’Anna serves both of them, expertly made, for a delightful close.

More quoted than L.P. Hartley’s seductive first line is one from William Faulkner, in “Requiem for a Nun.” He wrote, “The past is not dead, it’s not even past.”

Visit Stresa and you’ll be certain.