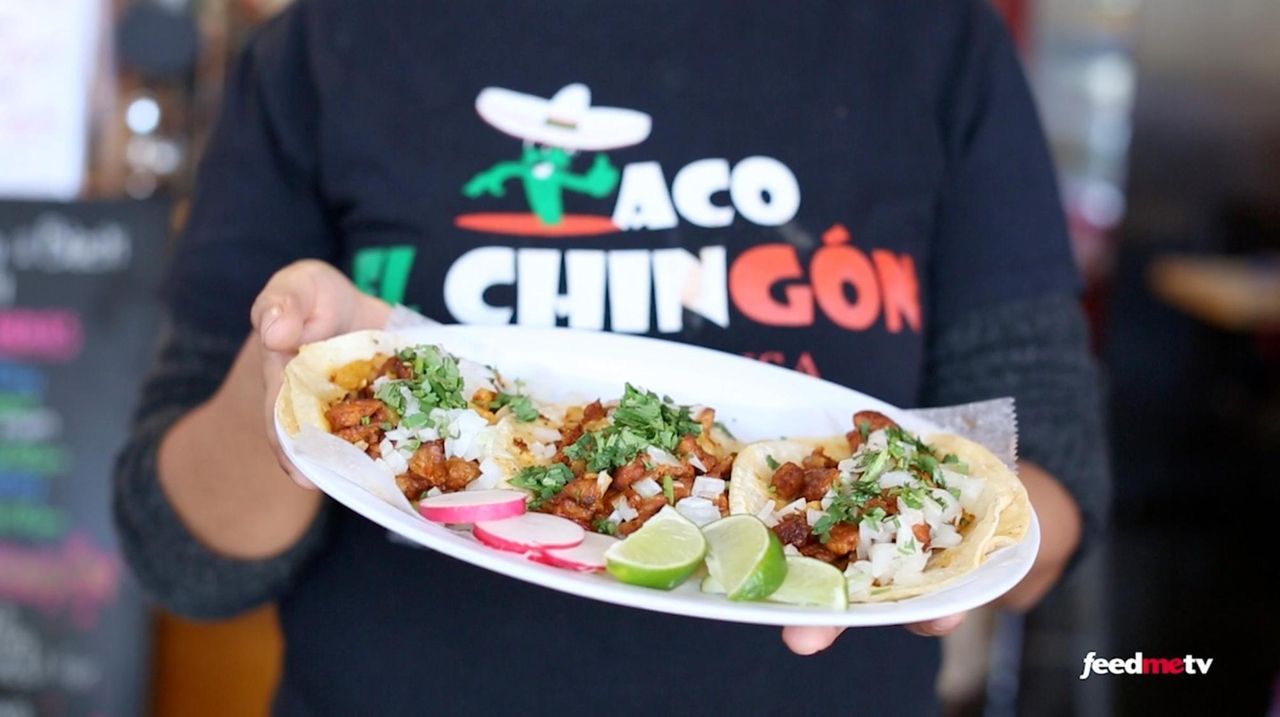 Laura Lucero, on Nov. 16, described the love that goes into the recipes at Taco El Chingón. Credit: Yvonne Albinowski

SERVICE: All smiles from behind the counter, and everything carefully wrapped in your takeout bag.

AMBIENCE: A postage stamp of a takeout spot with a counter, one booth and a few tiny tables; there is also a small market for chips, salsa, guacamole, flan and the like.

ESSENTIALS: Open every day except Sunday for breakfast, lunch and dinner. Credit cards accepted. No alcohol. Plenty of lot parking. Handicapped accessible, but challenging for wheelchairs.

I doubled down on the second visit: Carnitas, al pastor, chicken, campechanos. When I arrived to this cheerful little eatery, just off Merrick Road, owner Laura Lucero had immaculately packed up two bags and filled plastic containers with each of the six salsas she makes daily, from a zingy tomatillo salsa to a vivid salsa roja. The car filled with garlicky smells that would linger for hours. Later, at my desk, I was tucking into an al pastor taco as I talked to an editor, when she saw a look pass over my face.

“What happened?” she asked.

“I just bit into a pocket of fat,” I said. We both fell silent — she understood.

I’ve eaten al pastor in many forms — as a flap of pork with a single slice of pineapple; as a pile of citrusy shavings. This one, cooked not on a spit but on the grill, was as succulent as all get out, diced pork shoulder stained with guajillo chile, pineapple, achiote, cinnamon and a few other things, and far from a sad desk lunch.

Lucero was raised in Mexico City, where practically every corner is a street-food valhalla, and learned to cook from both her mother and grandmother back in their native rural Puebla; her dad owned a taqueria when she was little, and after moving to New York City when she was 24, Lucero worked in the food industry.

Now 41, Lucero opened Taco El Chingón this summer, and she has precise, uncompromising ideas about how food should be cooked, including eschewing cans and making most everything fresh daily: Her tacos, while stripped down to their essential cores, wallop with flavor. For carnitas, she braises pork shoulder the way she learned from her dad, with lard and orange juice and some sugar; though a touch dry when I had it, it was still clean and rich. The lengua — diced, grilled beef tongue — has the seductive vibe of offal about it; campechanos, a mashup of shredded beef and crumbled chorizo, vibrated with heat.

For $2 extra, you can have these on housemade tortillas, but the ones that Taco El Chingón uses are pretty excellent; pale, pliable, fresh-tasting and puffing out in places. Thicker, more irregular house-pressed corn cakes serve as a base for sopes, smeared with especially luxe refried beans, piled with fistfuls of crumbled queso fresco and shredded iceberg.

While sturdy enough, they play a backup fiddle to the magnificent, rare-in-these-parts machete — a floppy, oversized house tortilla layered with refried beans, melted Oaxacan cheese sliced avocado, tangy crema and meat of your choosing. Then folded, the insides ooze out as you eat, so try to sit at a table (or desk) and not your car …. just sayin’.

Of El Chingón’s tortas, not much can prepare you for the torta Cubano, a drippy creation that rivals muffuletta in complexity: Charred-all-over hero bread slathered with mayo and aggressively piled with carnitas, a flap of ham and a split hot dog, a gooey medium of melted Oaxacan cheese trying to hold it all together. It’s breakfast, lunch and dinner rolled into one.

Speaking of which, Taco El Chingón serves breakfast all day, and the huevos rancheros are stunning, as if someone went all Joan Miro with fried eggs positioned on crisp tortillas, rimmed with a simple tomato salsa. I had these during a third visit, when the booth was free and we finally ate in. The room was so cold we kept on our jackets on. There is no alcohol, but the tart hibiscus tea (called jamaica) is among the finest, and the cinnamon-laced horchata is made daily. Skip the nachos, an unnecessary nod to Americana, in favor of house tortilla chips, hefty and salty, dredged through guacamole which tastes like it stepped out of an avocado minutes before.

I was nonplussed by the quesadilla, not as cheesy as you’d like. But the flautas! They are behemoth, queens among flautas, crisp as coral on the outside and inlaid with chorizo-spiked potatoes on the inside, armored in shredded iceberg and queso fresco and green salsa. They cemented full-on amor. How long does it take to drive to Bellmore, again?