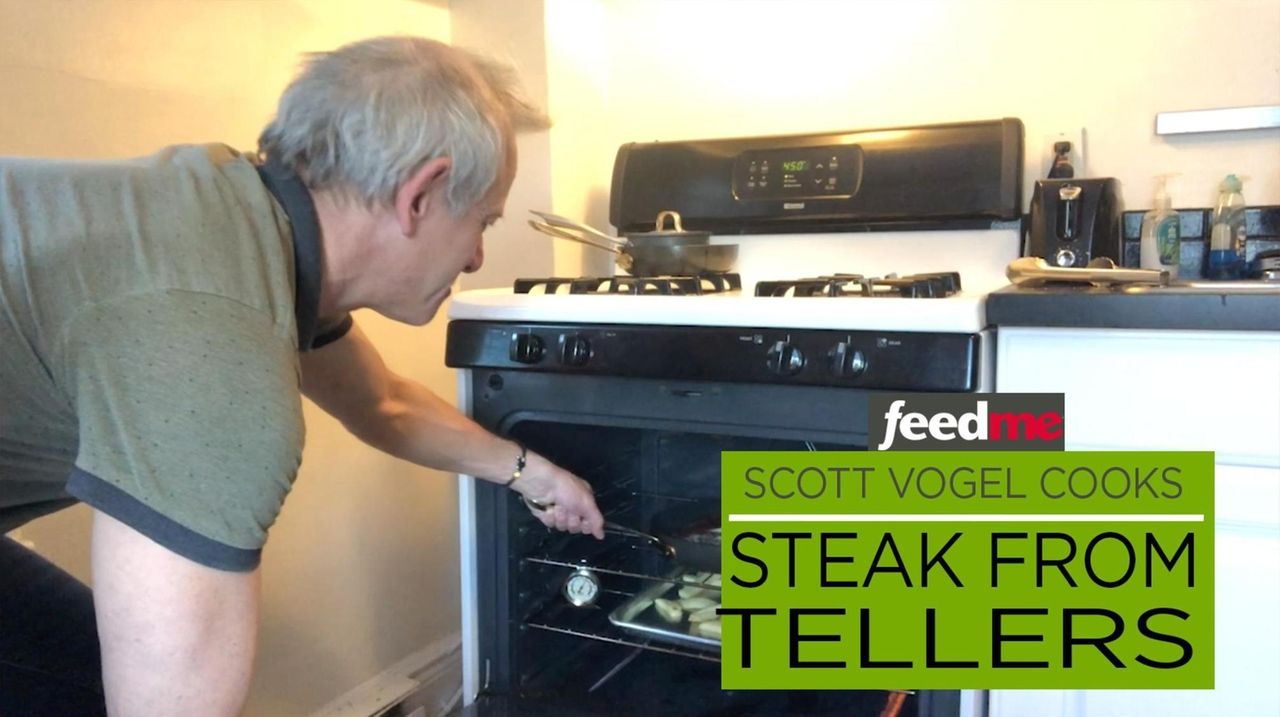 With restaurants only open for takeout and delivery amid COVID-19, Newsday food critic Scott Vogel traveled to Tellers in Islip on April 9 to pick up a steak from its meat locker to cook at home.  Credit: Newsday / Chris Ware, Scott Vogel

For 35 days and with the generous assistance of Bulleit bourbon, the 20-ounce bone-in steak known as Celebration Strip is aged in the meat locker at Tellers, the perennially popular steakhouse in Islip. A long time ago, by which I mean January, I had one and promptly lost my mind. The crunchy sear, the delicate booziness tenderizing pink flesh — it was among the best pieces of meat I’ve ever had. My only regret: It cost $68.

Celebration Strips still sit aging in that meat locker, but as of Wednesday, they will cost around $25, Tellers having partially transformed into a butcher shop in the wake of this cataclysm we are living through. Several other menu items may be purchased to go, but it’s the meat that’s getting all the attention — 12-ounce filets mignon once $52 are now $27, 40-ounce rib-eyes are $56 instead of $89, and the mammoth porterhouse for two, formerly 124 bucks, now goes for 60. In addition, select bottles from Tellers extensive wine vault command half and sometimes a third of their usual prices. All of these are deals I’d have been happy to discover in different times. Now that happiness is tempered by melancholy.

“It’s very surreal, a bad sci-fi movie,” said Michael Bohlsen of the Bohlsen Restaurant Group, whose nine establishments, including Tellers, he owns with his brother Kurt. “Honestly, everyone is still a little shellshocked.”

On Sunday evening, March 16, Tellers was packed, the guest count exceeding 200. The restaurant is always closed on Mondays, so the next day, when Gov. Andrew M. Cuomo ordered all New York restaurants closed, “95 percent of our staff was home,” Bohlsen recalled. “We didn’t even get to give anyone a hug. The rug just got pulled out from under us.”

The Bohlsens immediately turned Tellers and their other restaurants into takeout establishments, but overnight business dropped by 90 percent. “We kept all the managers, directors, chefs and sous chefs, but had to furlough the hourly employees for now.” The remaining personnel, many of whom are facing their own new realities, are still being paid whether they come to work for not, Bohlsen said. A few weeks into the crisis, the Bohlsens consolidated operations, whereupon Tellers' kitchen began preparing select dishes from other restaurants in the group, including H20 in Smithtown and East Islip, and Monsoon in Babylon. Its dining room, meanwhile, a stunningly beautiful former bank lobby with soaring wall sconces and 30-foot windows, was transformed into a staging area for takeout orders, a “huge, empty, giant pickup station.”

“Everything we do has been taken away overnight,” Bohlsen said. “Restaurant people are used to long days in social environments. This is the antithesis of that.” He’s trying to keep them as busy as he can — that’s partly what’s behind the butcher shop idea — but knows that Tellers will not be itself again for some time, a loss felt by everyone in his orbit, patrons included.

“One of the reasons we wanted to stay open was for the mental health component,” he said. “We want to be part of the normalization of people’s lives. People sometimes come in and say, ‘this is the only normal thing we’ve done all night.’” He hopes Tellers will continue to remind the faithful of the way things were, and might be again.

“We are optimistic that we will come out of this bigger and stronger than we’ve been, but it’s a very painful way to do it,” said Bohlsen. “To have the biggest crisis of our lifetimes and see our teams step up and reinvent this business — it’s hard to put in words how much it means to us. But what I’ve seen would bring a tear to your eye.”