AMBIENCE Lively and youthful, but not oppressively hipster

ESSENTIALS Open for dinner every day from 4 to 11 p.m., lunch Wednesday to Saturday noon to 3 p.m., brunch on Sunday from 11 a.m. to 3 p.m. Parking on street and in nearby municipal lots. Wheelchair accessible.

Never have I seen a culinary trend take over Long Island as quickly as the gastropub. Overnight, it seems, brass chandeliers have been replaced by Edison light bulbs, wainscoting scrapped in favor of exposed brick. Beer taps, once concentrated at the center of the bar, now extend along the whole length of it. Bartenders (renamed mixologists) spend their nights “crafting” cocktails from ever more arcane ingredients, while chefs have increased the number and complexity of dishes but have decreased their dimensions.

Among the scores of gastropubs that have opened recently, The Brixton distinguishes itself in its focus on quality and attention to detail. The 4-month-old Babylon spot is a partnership between Brad Wilson, Frank Bragaglia and Matt Murray, the owners of Patchogue’s Public House 49, and chef Phil Pasfield, formerly chef de cuisine at Starr Boggs in Westhampton Beach.

The minute you enter the restaurant, you are struck by its beauty. Wilson and Bay Shore interior designer Marcie Gorsline took gastropub clichés and elevated them with unexpected elements such as industrial casement windows and Danish modern chairs with sea-green velvet upholstery. In the bar, a chalk mural depicts fantastic flowers and the season’s signature cocktails.

That bar, managed by Bill Carlo, occupies the front of the restaurant, and sitting there you’ll get quite a show. One bartender mixes drinks while another tends to the oleo saccharum (a syrup made from sugar-muddled lemon peel) and a third bearded gentleman transfers house-dehydrated banana slices to a waiting vat of Hamilton Demerara Rum for its overnight infusion. 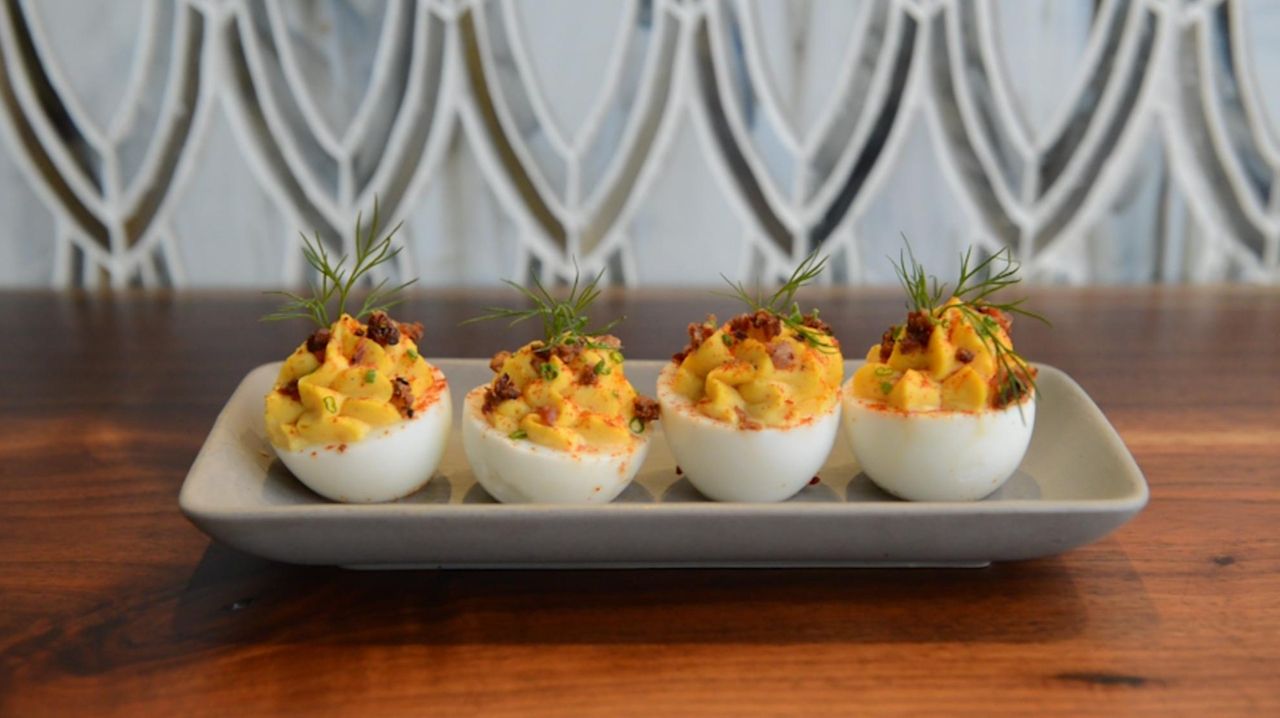 Get to know The Brixton in Babylon The Brixton gastropub in Babylon serves only small plates with a focus on craft cocktails and seasonal fare. On Saturday, May 13, 2017, chef / co-owner Phil Pasfield said he wants his customers to enjoy a more social dining experience. Credit: Daniel Brennan

Most of my barmates were noshing on Pasfield’s Thai popcorn with cilantro, peanuts, lime, chilies and caramel, an exotic, quaff-encouraging take on Cracker Jack. This was my favorite bar snack, followed closely by sriracha deviled eggs, pleasantly smoky with good paprika and showered with bacon, chives and dill.

There aren’t a lot of vegetables on The Brixton’s small-plates menu, but the baby beet salad is a winner. Beets, red and gold, diced and shaved, are topped with pistachios and goat cheese and anchored by arugula in a tart vinaigrette. I appreciated the playfulness of Mexican grilled carrots — a Bugs Bunny-friendly take on Mexican street corn — but the carrots, multicolored in the current heirloom vein, had little taste and certainly none of the sweetness and juice that a nice ear of corn uses to stand up to the richness of cotija cheese and the spice of chili powder.

Things picked up with two clean, simple seafood dishes: Toasted brioche lobster rolls were filled with creamy, tarragon-scented lobster salad and nothing else. Plump mussels lounged in a broth of saffron and fennel and once we finished them, I eagerly used the accompanying garlic bread to sop up the leftover broth, while my carb-avoiding friend used a spoon.

Pasfield does a terrific rendition of that British pub staple, Scotch egg, encasing a duck egg in duck sausage before breading and frying it. Achieving a barely oozy yolk, fully cooked sausage meat and delicate golden crust is not easy; he aces it. Just as successful, the American pub staple, sliders, here made with a blend of brisket, short rib and pork belly and served on a seeded roll with Cheddar and pickles.

Every gastropub needs fried chicken, and The Brixton does not disappoint with a moist, meaty, crunchy chunk of thigh perched on a biscuit with Cheddar and pickles.

Occasionally, the chef succumbs to the dark forces of over-orchestration. Roasted oysters could barely be tasted beneath a blanket of Tasso ham, herbed breadcrumbs and entirely superfluous potatoes. A small pizzette, already overloaded with speck, asparagus, Taleggio and Parmesan, was drizzled with a balsamic glaze whose sweetness killed the dish. Chicken tostones were tasty but leaden, a vaguely Mexican stew spooned into molded cups of fried green plantains that were too tough to cut or bite. In a bid to get something cool and fresh into my mouth one evening, I ordered the tuna poke with avocado and mango — but found that it was served on a bed of hot rice grits.

When Pasfield resists these temptations and hews to a less-is-more aesthetic, his food evinces a refinement and craftsmanship that, like the Brixton’s design, transcends the gastropub genre.