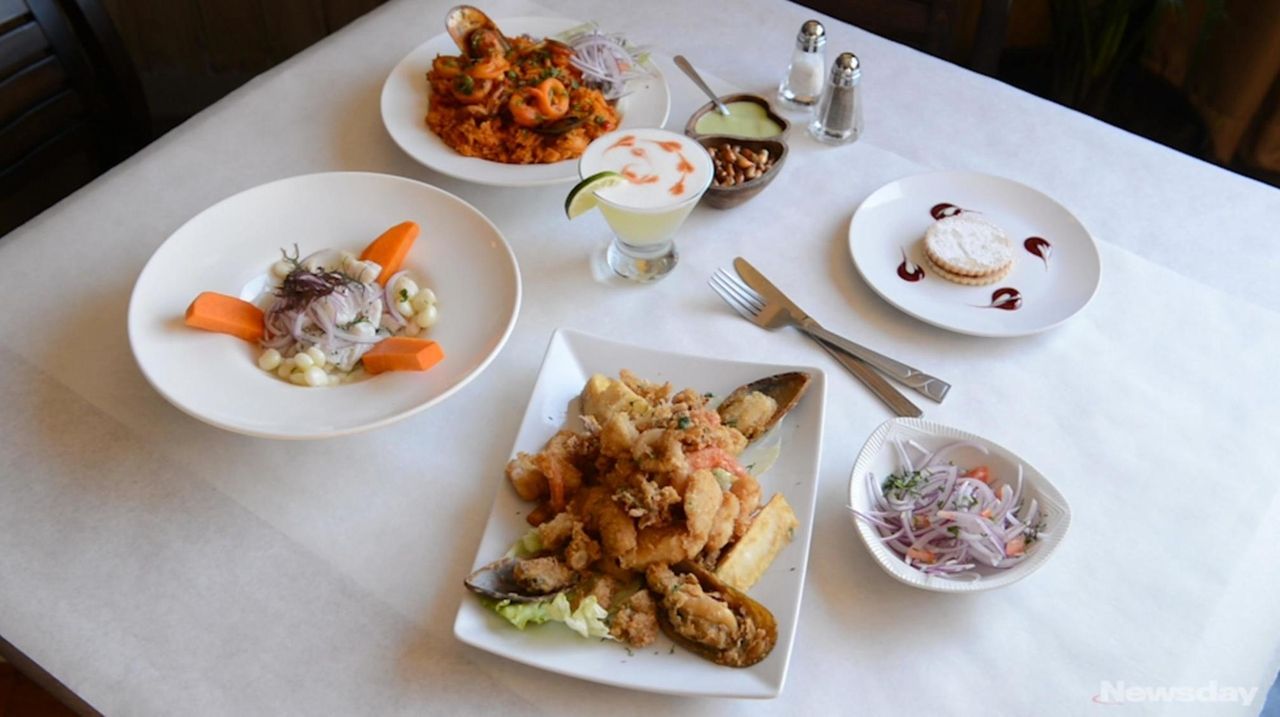 Newsday got an inside look into what makes for a quintessential Peruvian dish at The Inkan Restaurant in Garden City on Friday, April 27, 2018.  Credit: Daniel Brennan

AMBIENCE: A modest, small restaurant filled to the brim with charm

When did fried fish fall out of favor? Contemplating the stupendous jalea (mixed fried seafood) at The Inkan in Garden City Park, I sorely lamented the current American frito-phobia.

In Peru, a country with 1,500 miles of Pacific coastline, cooks know that nothing captures and capitalizes on the flavors of the sea like a light breading and a flash of hot oil.

Before me was a pile of crisp, golden morsels — tender pieces of swai, shrimp, calamari, mussels (still attached to one shell) and, for earthy ballast, segments of yucca. The pile was brightened by a shower of razor-thin slices of red onion, cilantro and tomato. Jalea is listed as an appetizer, but the “small” dish could easily serve as the centerpiece for dinner for two. Show me the Italian fritto misto to compete with that.

Quality and value are both in long supply at The Inkan, the 2-year-old offshoot of the Long Island City original (established in 2012). The restaurant is owned by Mercedes and Wilson Altamirano and their children, Wendy Loaiza and Johanna, David and Nicole Altamirano. The family recently moved to New Hyde Park, Nicole said, and wanted their second location to be closer to home.

In fact, the 34-seat dining room seems very much like a home. It’s decorated with Peruvian art and artifacts collected by Mercedes. Instead of a traditional restaurant pass, the food appears through a slot cut out of a Dutch door that separates the kitchen from the dining room.

The kitchen is the domain of Fernando Falcon, who has a real feel for fish. His ceviches (raw fish marinated in citrus juice and chilies) are fresh and generous. Unlike American adaptations, Peruvian ceviche often has more chew and, depending on how spicy you order it, more bite. I loved the fish’s feathery little toupee of seaweed and smattering of choclo, fat Peruvian corn, but could have done without the rosettes of pureed sweet potatoes.

Arroz con mariscos, short-grain rice cooked with calamari, shrimp and mussels, didn’t have the sophistication of true Spanish paella, but it got points for not claiming to be Spanish paella. The only piscine letdown was the pescado lo macho, whose creamy, golden seafood sauce could not compensate for the dish’s other elements, a characterless fillet of sea bass and rubbery shrimp and calamari rings.

The menu features most of Peru’s greatest hits: Anticuchos (seared slices of beef heart) were pleasantly chewy and meaty, a perfect starter organ for offal-avoiders. Whether filled with beef, chicken or cheese, empanadas were greaseless and satisfying. Papas huancaina, potatoes covered in an ajillo pepper sauce, were not as lush as some I’ve had, and their accompanying egg had been overboiled.

Rotisserie chicken, a Peruvian specialty, was predictably tender and savory, but the other meat entrees were problematic. I like gnawing on a bone as much as the next restaurant critic, but the spare ribs were unyieldingly tough. The bandeja, a belly-busting meat-stravaganza of Colombian origin, was shockingly sparse — I could see the plate beneath the meat! The “sirloin” steak was overcooked, and the fried egg that sat atop it was hard.

All came right at dessert. We enjoyed alfajores, meltingly tender sandwich cookies filled with dulce de leche, and a hearty slab of flan, whose sweetness was offset by a bittersweet edge of caramel.

And any missteps during the meal were smoothed out by the salsa music (at perfect volume) and a steady supply of pisco sours, the Peruvian national cocktail whose base spirit, pisco, has been distilled from grapes in Peru and Chile since shortly after the Spanish conquest. For the classic sour, pisco is shaken with ice, lime juice, simple syrup and an egg white, the latter adding a layer of foam that gets a cappuccino-worthy leaf decoration of Angostura bitters. There’s also Peruvian beer and, for teetotalers, Inkan Cola, fruit juices and shakes.

Adjacent to the dining room is a separate bar where you could happily while away the afternoon, watching the soccer game, nursing a drink and eating a jalea.