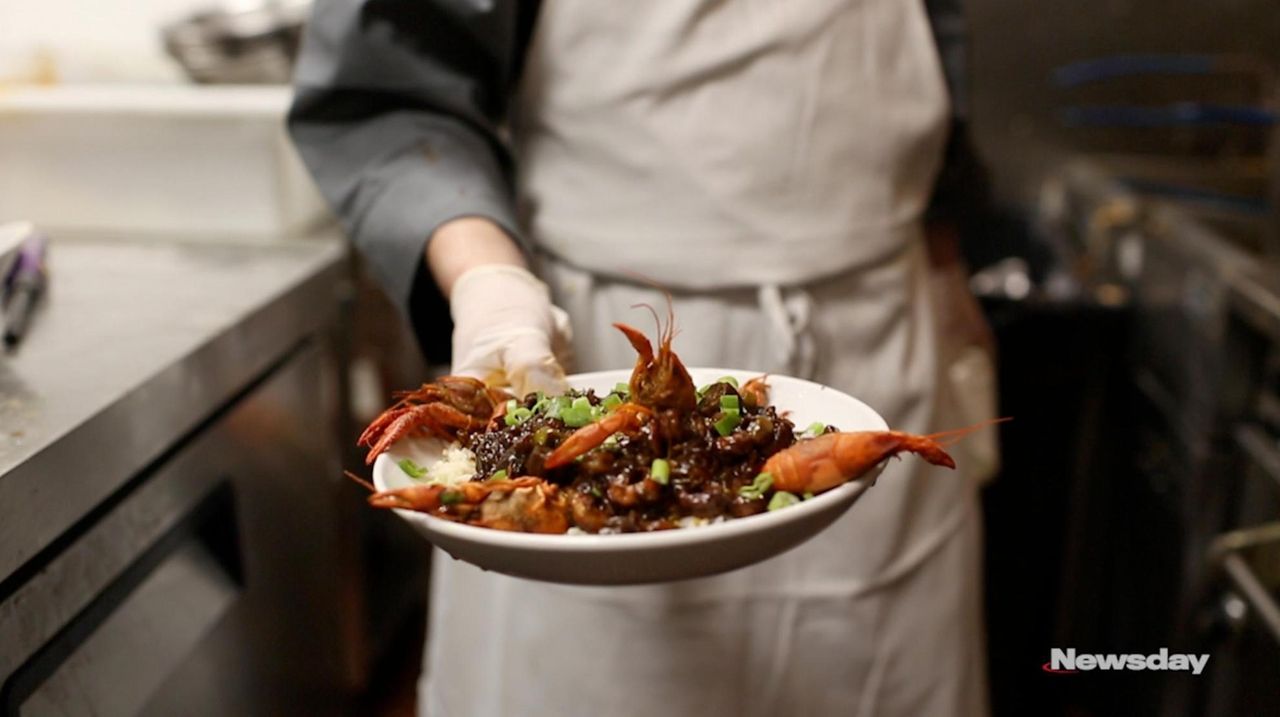 SERVICE: MIA or totally on top of things, depending on server

AMBIENCE: Theatrical yet free spirited, with sultry blue lighting and lots of clamor

Throw a beignet in New Orleans and you’ll hit something else worth eating — a po’boy, gumbo, bananas Foster — which is probably why many visitors return home a few pounds heftier than when they left.

Recreating the complex flavors of Creole and Cajun food, though — West African, French and Spanish for Creole, French Canadian for Cajun — can be tricky far from the land of crawfish and okra. Inside Top Hat Oyster Bar & French Quarter Kitchen, a free-spirited restaurant that opened in Bellmore this fall, chef Stephen Rosenbluth decided to give it a go.

Before he did, the chef traveled to Nola to work in the kitchen of Gabrielle, a Treme restaurant, and learn the ways of dirty rice and roux. Top Hat is Rosenbluth’s third Long Island restaurant, a partnership with Gerry McClorey, who owned this spot’s previous occupant, Crown Gastropub. (Rosenbluth and his wife, Jennifer Rosenbluth, also own Cardoon Mediterranean in Seaford and Anchor Down in Merrick.)

Crown Gastropub’s dramatic liquor locker still runs along one wall, but shimmery crystal chandeliers, patinaed walls and a 150-year-old bar lend the space a more theatrical vibe. The lighting is a sultry blue-purple and the room can get loud, perhaps fueled by the 300 bourbons and whiskeys on offer. The classic Nola cocktails were a mixed bag; there are punch-like Hurricanes  and a Sazerac so overloaded with absinthe it almost hurt to drink.

Mercifully, Rosenbluth and his executive chef, Gregory Guidone, rarely go overboard with Cajun seasoning, instead showing a respect for hard-won ingredients (such as crawfish flown into JFK) by not smothering them with cayenne, paprika and filé. Plenty of oysters are in the house: broiled, fried, stewed and raw, the last as briny Babylon Blues served with an Herbsaint-spiked mignonette. Meatier Gulf oysters are the ones that see flame, such as oysters Bienville with the addition of bacon and hollandaise, somewhat muddled compared with more straightforward, and tastier, chargrilled oysters with garlic butter and Parmesan.

The Oysters Top Hat, a riff on a Louisiana classic of oyster with artichokes and bits of pork — in this case, pancetta — is constructed like a creamy gratin but lacks texture, so you might hanker for something crispy to spoon them onto.

Alligator sausage-in-a-blanket is an instant crowd-pleaser, a foot of almost hot-dog-like sausage wrapped in handmade puff pastry and then sliced, a buttery queen among bar snacks. It packs more flavor per square inch than another starter, the breaded “voodoo” wings, which mimic fried chicken and lack zotz.

Top Hat’s dark-roux gumbo could be reason enough to return. It’s the color of chocolate, dense with shrimp, rice, spicy andouille and bits of okra, and almost hearty enough to name as a main course. Another killer appetizer was a special one night: Tart, crisp fried green tomatoes in an oyster- and calamari-laced rémoulade that we completely wiped clean.

Top Hat’s po’boys come on crackly French bread; despite being layered with fried local oysters, shredded iceberg and a punchy slaw, the oyster po’boy lacked the messy fusion that can be this sandwich’s X-factor. Finding a piece of oyster shell in its midst didn’t help.

It’s crawfish season, and a few in full orange armor lend visual drama to an inky crawfish étouffée over rice. Cracking into their sauce-slicked shells is tricky but necessary as crawfish meat seems scant in the “smothering” sauce itself. Stellar shrimp and grits picks up where that leaves off — a riot of taut shrimp over cheesy grits and vibrant tomato-rich sauce.

Overseasoning only became apparent at one juncture: fried catfish overwhelmed by Cajun spices in the breading. A slow-roasted half duck was dry, the meat sacrificed, maybe, for perfectly crisp skin. Cajun-style jambalaya, though prodigiously loaded with shrimp, sausage and all those holy trinity goodies, lacked the smoky, lusty flavor of memorable versions. Our most swooned-over main course at Top Hat was also possibly the least overtly Cajun: Supple beef tenderloin topped with something akin to chimichurri. It inspired envy in those who hadn’t ordered it.

Save for pecan pie, desserts were half-realized. Bananas Foster, for instance, were deliciously caramelized but  amorphous. As Top Hat continues to take shape, maybe the desserts will, too.