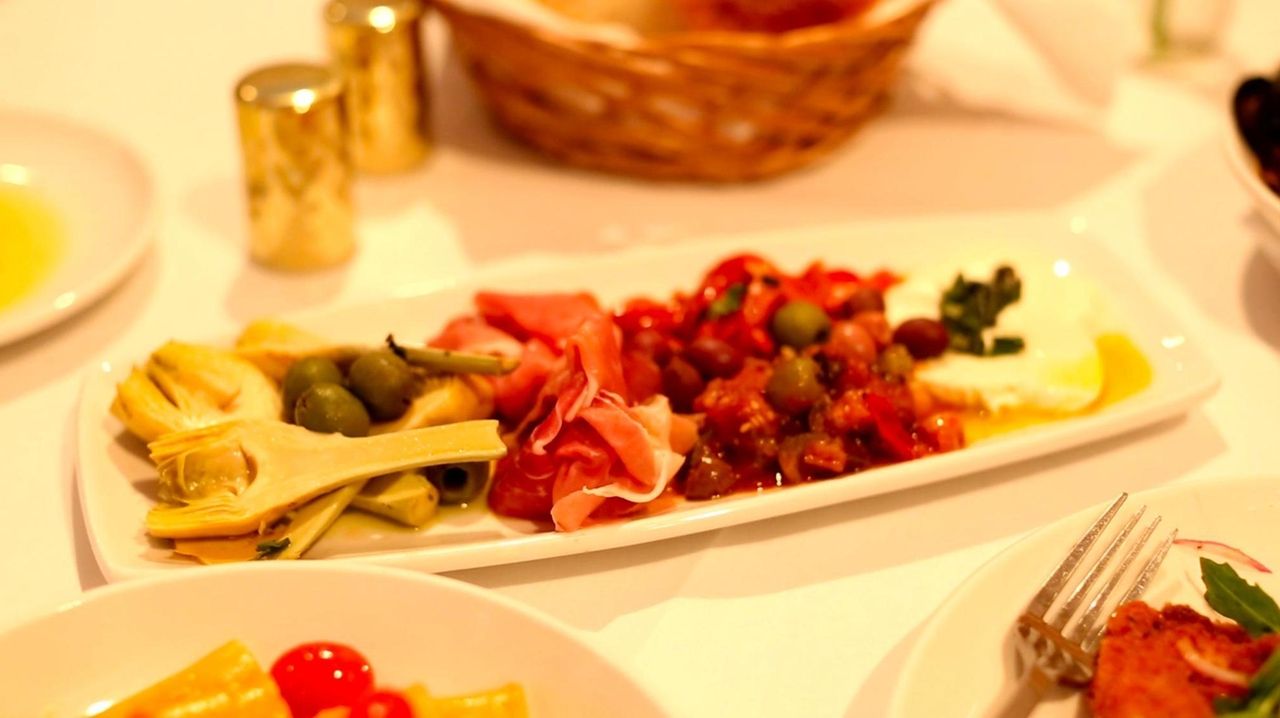 Artie Sabella, co-owner of Tutti Noi in Oceanside, explained the inspiration behind the simple elegance of his restaurant and its fresh Italian cuisine.  Credit: Yvonne Albinowski

ESSENTIALS: Open for dinner every day but Tuesday. Parking lot in back. Restaurant is mostly accessible but restroom floor is somewhat lower than door saddle: wheelchairs may have trouble negotiating it.

A sense of peace descends as you enter Tutti Noi. The vestibule, subtly perfumed by a basket of apples, protects diners from drafts and street noise. Next, there’s a welcoming smile from the hostess who, on two occasions, offered to seat me even though my party was not complete. The room, accented in shades of dove gray and shimmering gold, is sleek but warm. The tables are covered with thick white cloths; the flatware is heavy and well balanced; the stemware is refined; the brief wine list is full of interesting, well-priced bottles. The cordial waiter seems to have decades of experience under his belt.

But beneath its elegant surface beats the heart of mom and pop. In the kitchen is Artie Sabella who, 30 years ago, operated Terracina at this very address. His wife Tracey runs the front of the house. And the menu is soul-satisfyingly Italian. (Tutti Noi means “all of us.”)

Antipasto freddo, so often a lackluster lineup, is here elevated by stem-on artichokes that don’t taste like the inside of a can, housemade mozzarella and a caponata (Sicilian sweet-sour eggplant stew) so good I wished it were its own menu item. Bivalve buffs will thrill to the vongole e salsicce arrosto, little neck clams roasted in an anise-scented broth with sweet sausage, and the cozze Posilippo, plump mussels arrayed in tight concentric circles on a mellow, saffrony tomato sauce. Both dishes will make you long for better bread than Tutti Noi’s substandard cottony, sesame-seeded loaf.

The Siciliana salad could have been lighter on the arugula and heavier on the fennel and endive (or else re-christened “arugula salad”) but I appreciated the big chunks of unbilled blood oranges. Skip the burrata e nettarine with its hard, out-of-season nectarines and way-too-hot-for-the-dish Fresno chilies.

The pastas we ordered batted .500. Paccheri affumicante was a crowd-pleaser of giant Neapolitan rigatoni in a tomato cream sauce with a sprinkling of smoked pancetta. My only quibble with the orecchiette Barese was that the sausage should have been crumbled, not sliced, so it could settle into the little pasta “ears.” But a listless cacio e pepe was almost devoid of its starring ingredients, cheese and pepper, its sauce tasting a lot like the broth in the linguine with clams.

A funny thing happened on the way to the entrees. In his review-dinner debut, a new friend ordered filet mignon (in a Barolo reduction) medium well and I silently died inside. But the kitchen sent it out medium-rare, which delighted me and taught my friend that he actually liked properly cooked steak. Chicken capricciosa, a perfectly fried cutlet topped with a heap of arugula, cherry tomatoes and red onion, was a simple, unqualified success. Whereas the chicken pieces in the scarpariello had no discernible sear, robbing the dish of oomph. The same mélange of sweet and hot peppers showed up atop a pork chop that was so lean and overcooked, it offered no succulent foil to its astringently assertive garnish.

And now, a message from the department of taxonomy: Osso buco is Italian for “bone with a hole” and it describes a veal shank that has been crosscut into slices that allow the contents of the marrowed bone to enrich the liquid in which it is braised. A whole braised shank, like the one at Tutti Noi, is called “stinco” and it can be a fine dish when it is cooked gently to succulence, which it was here. But the clunky, chalky risotto on which it was served was in no way a “Milanese,” which should be creamy (from the well-cooked rice, not from the addition of cream) and tinged a sunny, saffron yellow.

The dessert to get at Tutti Noi is the tiramisu, not too sweet, not too goopy and soundly supported by its foundation of ladyfingers.

There’s so much that’s good about Tutti Noi — the quality of most of the food, the professionalism of the staff, the thoughtfulness of the décor — that I wish it were better. I wish there were better wines by the glass and better bread, I wish that the Caesar salad had more anchovy in the dressing, that the pannacotta weren’t garnished with strawberries that were white inside. I wish that all the pastas were as good as the paccheri and that the entrees were tighter. The terrific dishes I had convince me that the kitchen is up to the task and I hope that, in the ensuing months, it rises to the challenge.