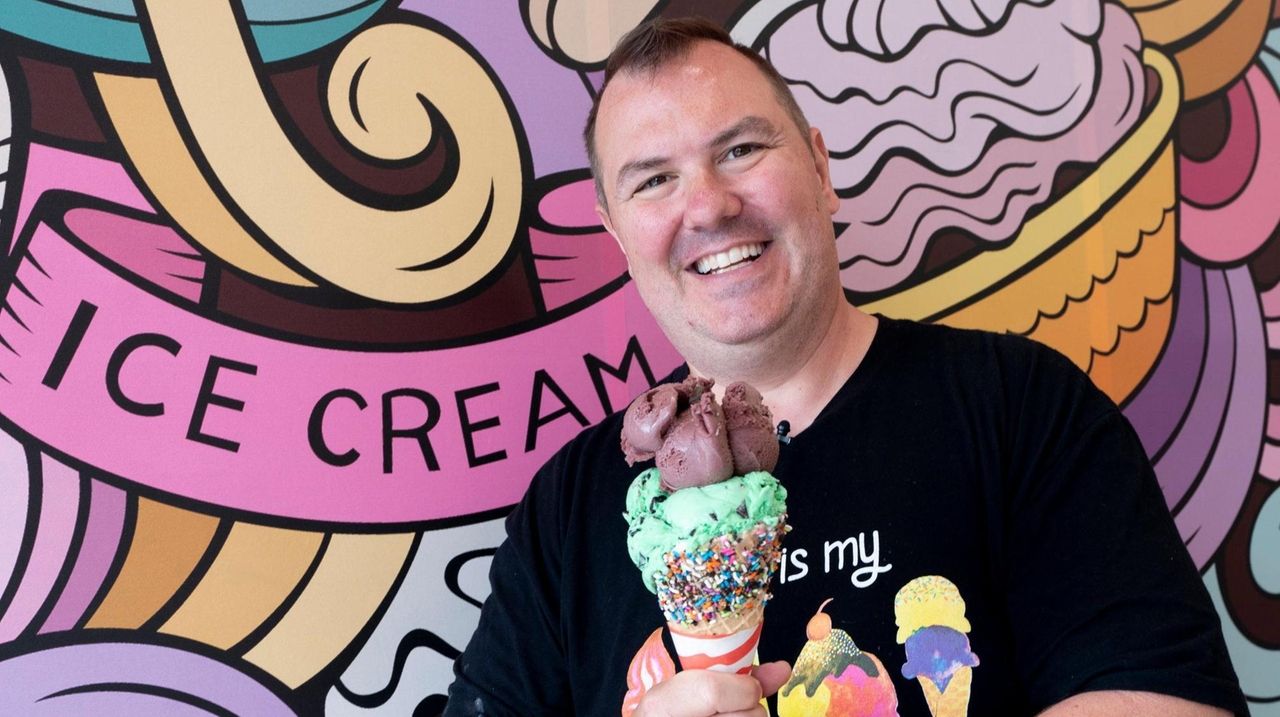 If Newsday were vegan ice cream, what flavor would it be?

To be clear, I knew going into this assignment that no combination of mouthfeel, mix-ins and plant milks could ever hope to capture our complexity, and yet I yearned to create a Newsday flavor anyway.

But what would we taste like? Cue a monthlong odyssey requiring countless hours of whiteboarding, careful scrutiny of Newsday’s past attempts at vegan community outreach, trial and error, offloading the entire assignment to a James Beard-trained artisanal ice cream chef in Commack.

Vegan ice cream seemed more of a city thing, and until a few years back, that’s exactly where chef Rob McCue and his wife Christine found themselves. But then their son Liam was born, a tiny apartment somehow became even tinier, Rob’s Upper West Side restaurant began to founder, and here on the Island, Granny’s ice cream shop hit the market, as did a suitable home in Greenlawn. "I played the game a long time in Manhattan," said Rob, still weary from catering gigs past — delivering hors d’oeuvres via taxi, pushing dish carts through snowstorms. "Ice cream washes off the hands a lot easier."

At his shop, Ice Cream Social, which opened in 2018 , McCue’s inventiveness and energy are the engine behind a constantly changing menu of unique flavors (vegan and non-), dozens of them on any given day. All are devised and produced in the same six-foot-square space in the back, where there’s just one batch freezer and one man making the batches — McCue. "My little ice cream kitchen is more like a think tank," he said. "I’m always looking for new things." (Currently in the works: an ube ice cream made from a purple yam popular in Filipino desserts.)

The one-man band thing is a burden, but it’s also kept McCue nimble, hungry. He saw the whole vegan ice cream thing coming for a long time, and even dedicated three years to perfecting his own recipe. Then came the pandemic, during which, for reasons still not entirely clear, the popularity of all things vegan grew substantially. (One analysis of Google Ads data revealed a 47% increase in vegan-related searches in 2020.) McCue usually offers around 10 plant-based flavors at his shop, and while they account for less than 20% of his overall sales, that’s double what he was doing pre-COVID. Some patrons actually tell him they prefer the taste over real ice cream.

"I tried oat milk, I tried almond milk, I tried everything, but could never get the creaminess that I wanted," McCue said, recalling his early experiments. A base of coconut milk and coconut oil turned out to be the winning formula. "It scoops into a perfect ball and spreads out once it hits your mouth, creating this luxurious feel. I thought it might seize up a bit, but it doesn’t."

He was excited about producing a vegan flavor for Newsday, and so was I after trying his base, which was surprisingly full-bodied and creamy. But what would make it authentically us? Were we caramel? Were we chocolate chunks? Were we nuts?

McCue seemed to think we were bananas, filling a large sheet pan with gooey, overripe spears and then caramelizing them with his blowtorch. He scooped the fruit into his batch freezer, poured in his vegan base and turned on the machine, which chewed and spit out enough creamy banana slurry to fill four metal tubs. After several minutes inside some sort of quick-freezing apparatus, the tubs of ice cream reached a soft serve-ish consistency, perfect for adding mix-ins. First off: a heavy pour of caramel.

That was an idea Colin Kaepernick had unwittingly given me after I wandered into the Ben & Jerry’s shop in Huntington. The quarterback, who is himself vegan, partnered with the company last December on Change the Whirled, wherein fudge chips and ground-up cookies are swirled throughout a caramel-flavored, sunflower butter-based ice cream. I found it quite good, wishing only that Colin had dialed up the caramel, which can bring a richness (read realness) to vegan flavors.

McCue gave Newsday’s tubs a heavier pour of caramel sauce, stirring it over and under, round and round the banana cream until peak ribbon-age was achieved. Then he added great handfuls of chopped pecans. After seeing what a mix-in of walnuts could do to a terrific scoop of vegan toasted coconut at Sweet Sensations in Babylon, and how well sharp bits of almonds played with chocolate chips and coconut in a vegan flavor at Lics in Northport, nuts seemed essential.

The taste test. The moment of truth. We dug in, long strings of caramel clinging to spoons as we brought nutty banana cream to our lips. To our mutual astonishment, the concoction tasted … just OK. McCue shook his head in disappointment. Something was missing. A second later, inspiration arrived. "Let’s kick this up a notch," he said, simultaneously reaching behind the batch freezer for a half-empty bottle of Bowmore 12-year-old Scotch. Without so much as a word, McCue poured version 1.0 back into the batch freezer and churned in a cup of Bowmore.

The taste test. Perfection. It was bananas foster-esque, certainly, but smoky and more interesting. OK, I thought, taking a second bite and then a third — this is vegan I can go to bat for. "I could eat an entire tub," I heard myself say, proclaiming that this was it, this was Newsday.

"What do you want to call it?" McCue asked.

"Boozeday," I replied. He loved it. We high-fived.

Only later would I wonder about the wisdom of associating a Scotch-infused ice cream flavor with a family newspaper. As such, I assumed it was doomed to remain one of history’s great unlicked ice creams, the stuff of legend. But no — Boozeday is indeed now on sale, McCue having deemed it worthy of his illustrious roster.

Once more, Newsday delivers a scoop.

Here are a some of the Island’s vegan ice cream purveyors along with a few recent flavors:

Great places to get ice cream on LINo food sums up summer like homemade ice cream, whether it's a cone on the run, or a sit-down feast of a banana split.