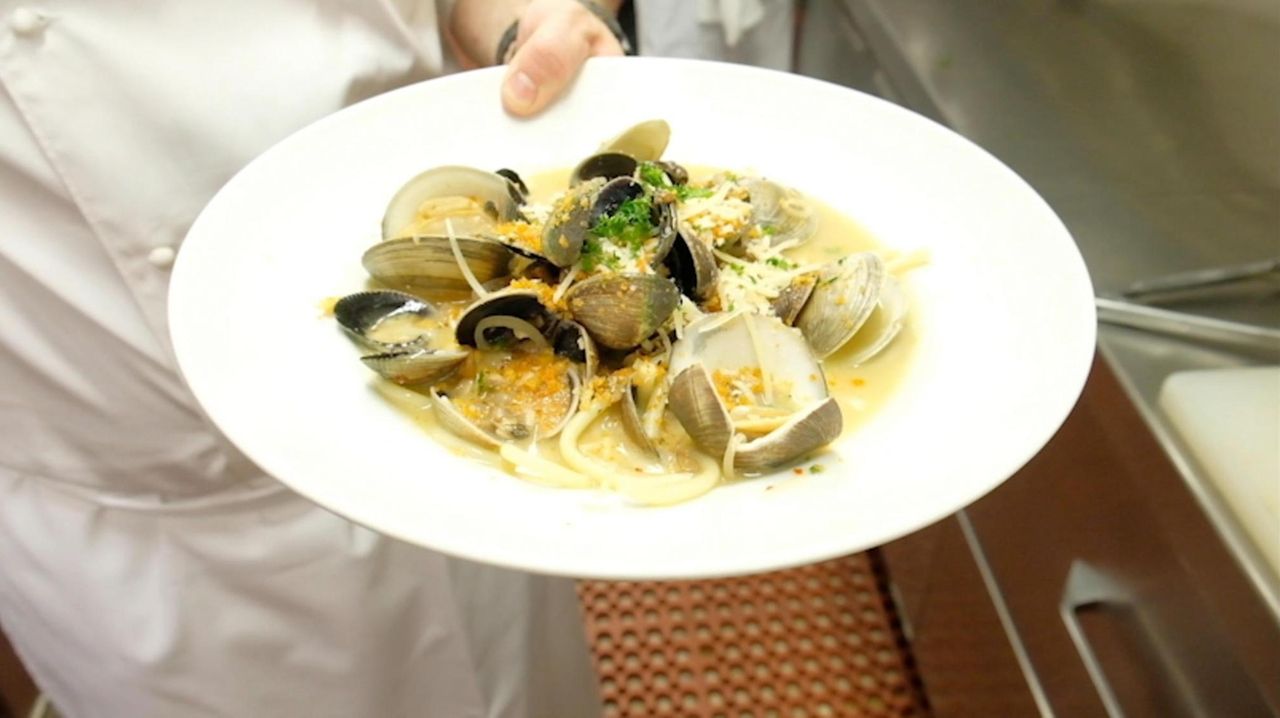 Chef de cuisine Keith McConnell at the View in Oakdale takes us through the steps on how he makes Bucatini Alle Vongole, which is littleneck clams and cockles over Bucatini pasta. Credit: Daniel Brennan

William K. Vanderbilt, the wealthiest man in the country, built one of the grandest Gilded Age mansions on his 900-acre estate in Oakdale. It was called Idle Hour. His land fronted Great South Bay and extended along the Connetquot River.

Today, you may eat better than he did.

View, on property once part of the holdings, is a sunny destination for dining and drinks, for its location, design, style. Closing in on a decade, View now feels younger and brighter. And it has definitely improved on what already was very good.

Be seated outdoors or in, enjoy the scenery from the patio, watch the boats motor by, notice children trying to net their own catch at the yacht marina.

You'll be comfortable at almost any table, but especially either those at the windows, separated by blue-and-white ginger jars; or the alfresco ones, which require only the weather's teamwork.

Smoothly overseeing View is general manager and wine director Joseph Scalice, who co-owned the acclaimed — and missed — March in Manhattan; and managed Long Island restaurants including Tellers: An American Chophouse in Islip and Thom Thom in Wantagh.

Chef William Muzio has been at View since 2010. His resume includes stellar stints at the pioneering but gone Pacific East in Amagansett; and the recently shuttered East by Northeast in Montauk.

Muzio's openers also include a delectable fig-and-housemade ricotta toast on sourdough, sweetened with local honey and paired with raisins on the vine. You'd eat it for breakfast. At lunch, try the lobster salad roll, generous and well-seasoned, heaped onto a toasted, buttery bun. Anytime, pick the crab and shrimp cocktails, and the day's east and west coast oysters.

Lobster bisque, however, doesn't have the depth you expect; and the summer corn-and-crab chowder, amply tomatoed, is a bit bland. Ceviche of shrimp, while prettily presented in a half coconut, could use another shot of citrus. View serves fine nigirizushi and sushi rolls. But the best choice is silky, slightly spicy yellowtail jalapeno finished with ponzu sauce.

Veering west, Muzio prepares a terrific bucatini with littlenecks and cockles, sparked peperoncino and given added texture with toasted breadcrumbs. You'll be dipping bread into the roasted garlic-and-white wine broth till your plate is dry.

Muzio excels with swordfish teriyaki, playfully capped with watermelon salsa and set on coconut risotto; and swordfish with corn, chorizio, favas, and roasted tomatoes in a vivid Calabrian-style tomato broth. Meaty yellowfin tuna a la plancha, best rare, gets a boost from a coconut-curry emulsion. Ginger-lemongrass broth and kaffir lime accent a snowy slab of halibut, which arrives with vermicelli and hon-shimeji and shiitake mushrooms.

If you're not set on seafood, View sends out tender braised short rib of beef, with a surprisingly tasty parsnip-white chocolate puree; and juicy roasted chicken with cippolini onions and fingerling potatoes. The chef's cheeseburger, with bourbon bacon-onion marmalade, rests on a bun seasoned as if it were an everything bagel.

But gelati and sorbets will do too after a couple of leisurely, very rich, idle hours.