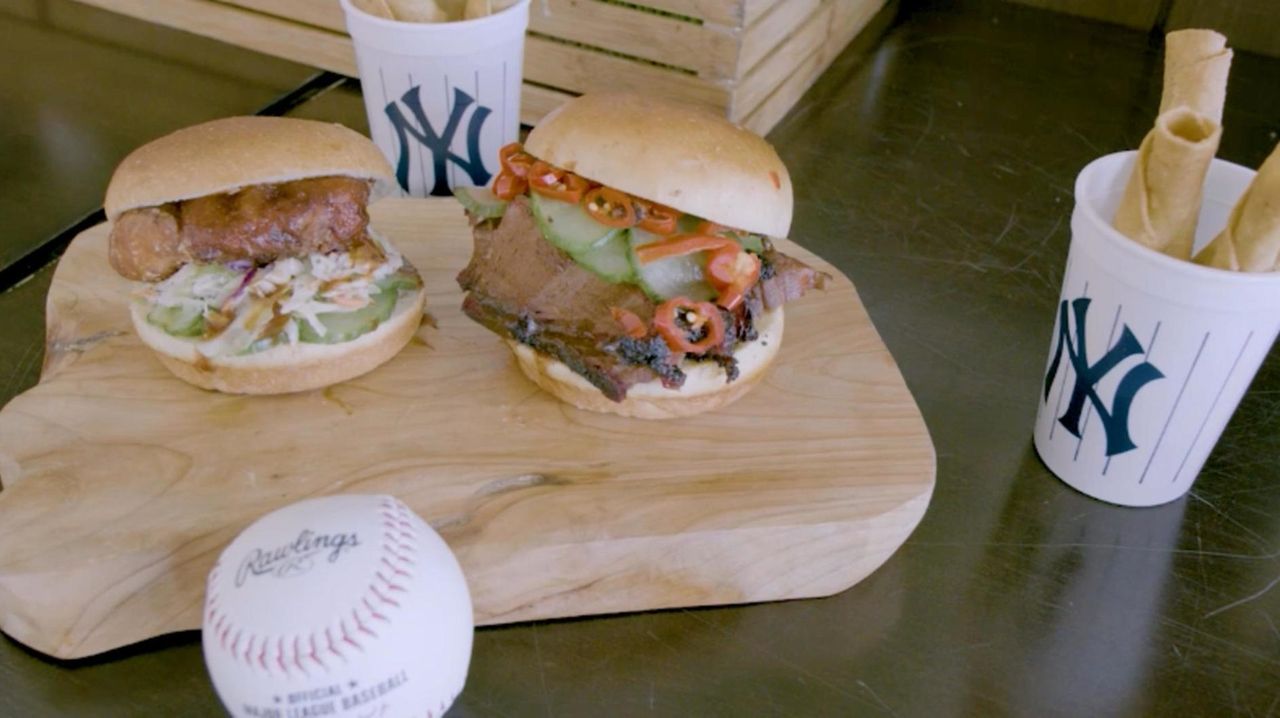 Yankees' senior executive chef Matt Gibson on Monday showcased some of the new food offerings fans can enjoy at Yankee Stadium as the season kicks off. Credit: Newsday / Chris Ware

Yes, the heavy hitters at Yankee Stadium in 2018 are expected to be Giancarlo Stanton, Aaron Judge and Gary Sanchez.

But here come Pinstripe Pilsner, brisket burnt ends and jumbo Tater Tots, part of a potent new food lineup available from concessions at each level of the ballpark.

The season’s home opener is April 2, when the Yankees host the Tampa Bay Rays.

Fans will be introduced to Pinstripe Pilsner, a beer crafted for the Yankees by Blue Point Brewing Co. in Patchogue. It’s one of several Blue Point beers available.

They can also handle a double play with the new King’s Hawaiian pork sandwiches and pork nachos.

Other new players for team 2018 include black bean and chicken taquito cups, Filipino pulled chicken steamed buns and vegan sausage from Bareburger that is sparked by jalapeños and caramelized onions.

You’ll also be sipping Grand Slam shakes, among them a Pinstripe vanilla one with churro, cotton candy, Cracker Jack and a caramel drizzle.

And then there are Tater Kegs, or “Tater Tots on steroids,” according to Matt Gibson, senior executive chef at Yankee Stadium. The mega-tots arrive on a skewer, enriched with sour cream, Cheddar cheese, bacon bits and scallions. Gibson said the Filipino adobo bao bun is made from a staff member’s family recipe.

Gibson, a California native, added, “I’m a fan of King’s Hawaiian” bakery products. “We worked with their team,” leading to the pork and chicken dishes.

Lobel’s, popular for its steak sandwich, returns with steak-topped fries and a meatloaf cheeseburger. Mighty Quinn’s BBQ scores with a full-pound “brontosaurus rib” that’s smoked for 16 hours, as well as burnt ends and pulled pork sandwiches.

“Everything is available to anyone at the stadium,” chef Gibson said.