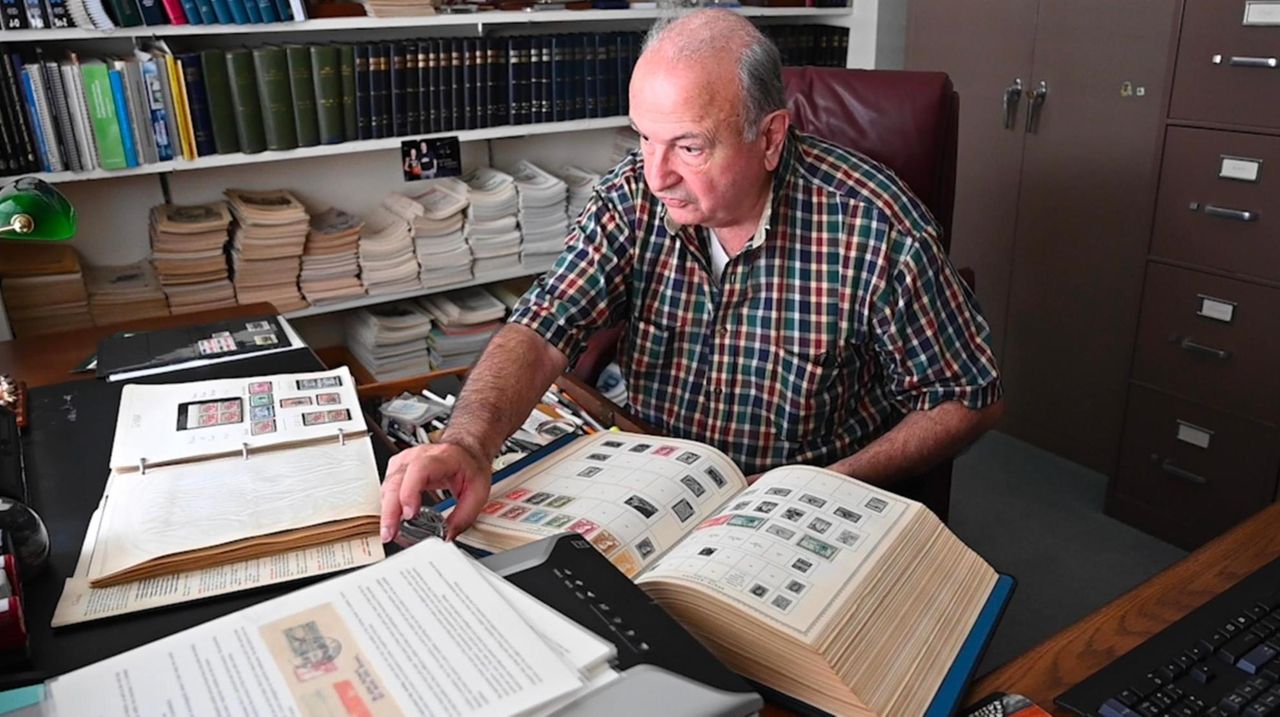 Steve Reinhard has been collecting stamps since he was 8 years old, when he joined a stamp club in elementary school. Credit: Newsday / Alejandra Villa Loarca

What keeps somebody glued to a hobby for 70 years?

For Steve Reinhard, 78, who has been happily stuck on stamp collecting for seven decades, the pastime delivers first-class delight. Every tiny sticky-backed perforated piece of paper tells a story.

"I’ve learned so much about history and geography, from where countries are located to what their capitals are. I don’t have a talent for those subjects," said Reinhard, who lives in Garden City and taught math at John F. Kennedy High School in Bellmore before retiring in 1997. "I spend hours a day in my stamp room at home."

Introduced as a kid to philately by a neighbor in Queens, where he grew up, Reinhard joined a stamp club at PS 70 in Astoria. His main interest now is airmail materials — unused stamps as well as ones on envelopes. He’s currently focused on Mexican aerophilately between 1917 and 1939, a span covering the launch of airmail in Mexico up until the start of World War II.

A 10-cent 1927 Spirit of St. Louis stamp commemorating Charles Lindbergh’s epic first solo trans-Atlantic flight from Roosevelt Field, on Long Island, to Paris is another of his favorite pieces — one with a local connection.

"I’m not the average collector. I spend a lot of time on organized philately," said Reinhard, who has held various leadership positions in stamp-collecting organizations, including the American Philatelic Society and the American Air Mail Society. "I got interested when I was 8 years old, and it’s never stopped."

His go-to pastime, shared by an estimated 5 million people in the United States, gets showcased during National Stamp Collecting Month in October. Amid the COVID-19 pandemic, there’s been a spike in interest in stamp collecting — similar to rises in bread-baking and gardening — because people have more time on their hands. Even when you can’t travel, stamps bring the world right to your fingertips. Oh, the places you’ll go — on paper.

During the summer of 2020, web traffic and sales figures for the APS nearly doubled compared to the same period the year before, according to executive director Scott English, 50. "We’ve seen membership applications grow significantly," he said. They’ve also seen demographic shifts. While 80% of APS members are over 60 and only 9% of all members are women, half of the new applications are female, English said. "Applications are substantially more female, diverse and younger."

The boost in philately’s online presence doesn’t surprise Long Islanders in the stamp business. "There have been no stamp shows since March," said dealer Mark Eastzer, 56, proprietor of Markest Stamp Co. in Lynbrook. "Demand and sales are both up. Collectors have nowhere else to go but online.

"People are stuck at home, they’re bored," added Eastzer, whose company specializes in U.S. and worldwide stamps from 1847 to 2020. "I have heard that people are pulling out collections that they haven’t touched in years."

He’s not alone. "People have been cooped up for months," said Bob Prager, 63, a dealer at Gary Posner Inc. in Rockville Centre that specializes in pre-1930s U.S. stamps. "There’s been a noticeable uptick in our business — about 25% in the last quarter."

"Collectors love the thrill of the hunt," added Prager, "and the satisfaction of completing a collection."

That’s been true since stamps were introduced in the 19th century as a way for people to pay for their mail. The Penny Black, issued in 1840 in the United Kingdom, was the world’s first adhesive postal system stamp. It depicted Queen Victoria in profile. The first U.S. postage stamp, issued in 1847, featured statesman, kite-flier and, fittingly, the original postmaster general, Benjamin Franklin.

Wade Saadi, 71, who owns Pencom Systems, a Great Neck-based IT technical staffing and recruiting firm, and has a home in Sag Harbor, got into stamp collecting as a kid. He dropped it as a teen and picked it back up in his 40s and has been going strong since.

Saadi’s particular interest is in the period from 1847 to 1868, which marks the first two decades of U.S. stamps being issued. "The country was adapting to postage stamps," he said. "It had never been done before. There were growing pains." Everything from the colors of the postage stamps, the type of ink and paper, to how to cancel them to prevent reuse had to be considered, he added.

Saadi has exhibited his collections and served in a variety of leadership positions in stamp groups including APS and the Collectors Club of New York, which turns 125 next year. A foodie and a globe-trotter, Saadi has put dining out in restaurants and travel on pause amid the pandemic and used many of his spare hours to "delve deeper" into collecting. "Research is a big part of what I do," he said.

The key to starting out in philately is having a passion for something. "It can be anything," English said. "People collect from every angle."

Many assemble collections around a topic. Some of the most popular themes are cats, art, butterflies, trains, birds and space, to name a few. Pop culture, including Disney characters, looms large on stamps, along with world events. The Inter-Governmental Philatelic Corp., which produces and markets stamps worldwide, commissioned stamps honoring COVID-19 health care front-liners. The countries of Gambia, in West Africa, and Tuvalu, in Oceania, are among participating nations.

"No matter what your income, you can collect stamps," said Eastzer, adding that collectibles range in price from pennies to millions of dollars.

Celebrated shoe designer Stuart Weitzman — a 1959 graduate of Hewlett-Woodmere High School — pushed the envelope on philately finances at a Sotheby’s sale in 2014. He paid $9.5 million for a one-of-a-kind British Guyana One Cent Magenta stamp issued in 1856. An exhibition of the rare stamp wrapped a four-year run at the Smithsonian’s National Postal Museum in Washington, D.C., last December.

"There was an unfilled square in my childhood stamp album, which I was sure would never be filled," Weitzman said in a museum release for the show. "One should never say ‘never’ …"

No matter what your budget is, there are various sources for finding stamps to add to a collection. Among them: The U.S. Postal Service, your mailbox, local post office, stamp dealers, stamp clubs and organizations, and in-person and virtual stamp shows.

Long Island collector Ron Huetter, 73, who taught American history and economics at West Hempstead High School and as an adjunct professor at Adelphi University and LIU Post before retiring in 2015, got into stamps when he was 8 and vividly recalls buying small sacks of bulk stamps on torn-off corners of envelopes as a kid. "They were called ‘mixtures’ and cost about 25 cents," he said.

To unstick the stamps affixed to envelopes, he’d steep the contents of the pouch "like tea bags" in warm water, then painstakingly rinse, dry and organize them one by one. He still has his first album, which his father bought for him and whose bright orange cover fell apart from so much use. His mother made him a new one out of now-faded yellow oilcloth.

You can still buy bulk stamps — 1,000 of them sell for under $20 — on amazon.com and at stamp websites. "They’re a grab bag, something to play with," Eastzer said. "You sort them and put them in a book. You could find a mystery stamp worth some money."

"You specialize your collection as you get older," Huetter said. His current focus: stamps issued between World War I and the 1980s. He chose that endpoint for a number of reasons, including that by that time engraved stamps had become a thing of the past.

After decades of collecting, he still marvels at the outsize beauty captured in miniature. He’ll look at images under a 50-power scope magnifier to get a better look. One stamp he can’t get enough of is an 8-cent Trans-Mississippi Exposition issue from 1898 depicting a wagon train with a cavalry escort.

"These are pieces of paper about an inch square," he said. "You see the details in the little faces. The skill is remarkable."

Besides itty-bitty eye candy, there’s therapy. "Stamp collecting has helped keep me calm," Huetter said. "Careers come with stress. It eased it. To some extent it helped with stress during COVID. It diverts the mind."

Since the pandemic began, collectors have found new diversions, including APS Stamp Chats and Conversations with Philatelists — each on YouTube — that have sprung up to help fill the gap left by canceled stamp shows and club meetings. "There might have been podcasts before," Saadi said. "But before no one had time. Now we do, and they’re teaching us new things."

The challenge to find that perfect, must-have specimen is one that stamp collectors thrive on. "I’ve spent my life doing it," Reinhard said. "It’s all been fascinating."

How do I begin? “A good way to get started is to make a list of things you like — bicycling, roses, cooking or hedgehogs,” according to the American Topical Association, americantopical.org.

Do I need special gizmos? Not really. But tweezer-like stamp tongs that keep collectibles in good condition by minimizing handling is one helpful tool of the trade, according to the American Philatelic Society, stamps.org/learn/getting-started/tools-needed-to-get-started.

How do I gauge quality? One way is to see how well the design is centered, as opposed to being crooked or lopsided, according to the U.S. Postal Service, about.usps.com/corporate-social-responsibility/stamp-collecting.htm#asc1.

Do I need to know certain terms? Most hobbies come with a language of their own and knowing it can be helpful. The National Postal Museum has an A to Z glossary, postalmuseum.si.edu/glossary-a.

This recipe for black bean soup is ready in a hurry
10 events, things to do this weekend on Long Island
5 things you need to know about Winter Restaurant Week
Over-the-top tasting menus gain popularity on LI
These tropical restaurants will help fight the winter blues
Long Island restaurants offering a true taste of Japan
Didn’t find what you were looking for?