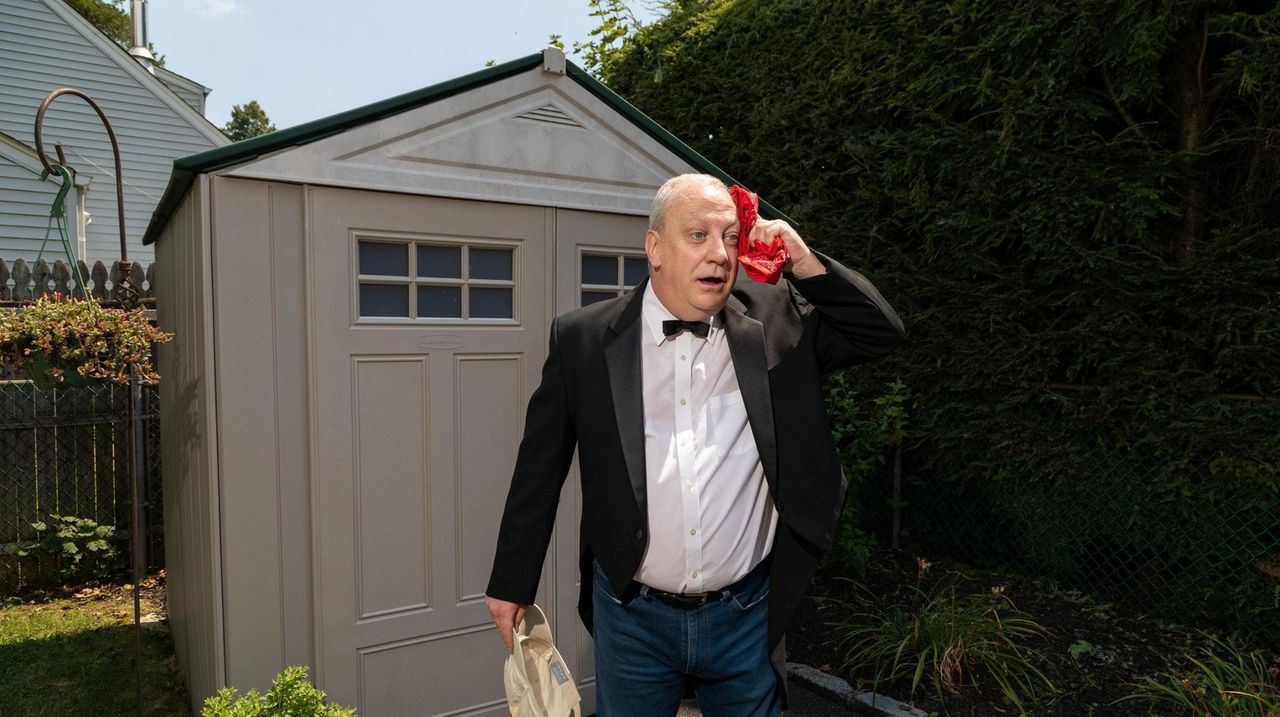 With theaters still shut down, Patrick Finn, of Farmingdale, participates in Shakespeare in the Yard, an EastLine Theatre project in which actors presented monologues and soliloquies outdoors from 37 Shakespeare plays, as a way to bring the arts to Long Islanders.   Credit: Barry Sloan

Lynda Gaug, of North Babylon, played King Lear this spring, delivering a monologue while a storm roared around her. She didn’t, however, perform on stage. Instead, Gaug, 70, performed in her backyard, daring the artificial thunder, lightning and rain to do its worst.

“I was hoping to film during an actual storm,” Gaug said. “The weather was fine, so we had to create our own storm by shooting near dark with a fan, a small light and sound effects from a cellphone. We were fortunate that the sky looked ominous that evening.”

With theaters closed and stages silent, Gaug is among nearly 40 Long Island actors, including many in their 50s and older, who have been performing Shakespeare solo outdoors, typically in a backyard, driveway or elsewhere on their property.

Actors found purpose, online audiences found theater — and all made connections. EastLine posted the performances on social media, where many have gotten hundreds of hits.

“When they announced that Shakespeare in the Park had been canceled, we were moved by that. We were upset,” Danny Higgins, EastLine’s artistic director, said, explaining how inspiration was drawn from the pandemic’s impact on the annual Central Park productions. “Generally, most of us love to attend that.”

“Not only to keep the creative juices flowing,” said Higgins, 26, of Malverne, “but to allow our artists, the people who get their fix with us, to still all do that.”

Dialogue is the heart of theater, but as people often shunned physical contact, monologues had their moment. “It's personal. It's private,” Higgins said. “It's more intimate. It is just you.”

The story of Shakespeare in the Yard began pre-pandemic, in February, when EastLine lost its lease in Wantagh. “Indecent” by Paula Vogel was its last show in that space.

“I remember every moment of that day,” Higgins said of the last show on Jan. 26. “That performance sold out weeks in advance.”

EastLine made it rain on stage with the help of piping, riddled with holes, running from a sink across the ceiling. Bringing the outdoors in almost foreshadowed EastLine’s next project — taking theater outdoors.

“We were in the process of looking for a new space when this whole thing went down,” Higgins said of the COVID-19 outbreak. “Losing the lease ended up being the worst-best thing that happened. We didn’t have the financial obligations while theater was put on hold.”

Shakespeare may seem difficult and distant to some, but EastLine had put on more than its share before the coronavirus outbreak. Higgins directed four Shakespeare plays, and many actors performed the Bard’s work on stage before taking it to their backyards.

Gaug performed her first Shakespeare roles last summer at EastLine as Oberon in "A Midsummer Night's Dream" and the gentlewoman in "Macbeth." John Bruzzo, 52, of Islip, appeared in EastLine’s “Richard II.”

Patrick Finn, 58, of Farmingdale, played the title role in “Titus Andronicus,” Flute/Thisbe in “A Midsummer Night's Dream” and Lord Hastings in “Richard III.”

Rosemary Kurtz, a 40-plus Merrick resident, said her first Shakespeare play was with EastLine a few summers ago. “I was Queen Elizabeth in ‘Richard III,’” she said. “I had always wanted to do Shakespeare, but never really got the chance until then.”

And Adam Bjelland, 44, of Malverne, played the title role in “Macbeth” as well as appearing in “A Midsummer Night's Dream” and “Richard III.”

“I find it comforting that the joys and struggles people experienced 400-plus years ago are still the very same things that drive people today,” said Bjelland, who teaches 10th-grade English at his alma mater, Valley Stream Central High School. “Love and family. Power and corruption. Fate versus free will.”

Higgins said that for Shakespeare in the Yard, he “didn’t want repeats of the same monologue or the same character,” and “wanted it to be as fresh as possible.”

Actors picked roles they might not play easily in full productions. Women played kings, and men took on roles typically performed by women. Michael Chimenti, for example, played a jailer’s daughter from “The Two Noble Kinsmen.”

Actors picked roles for different reasons. “Glenda Jackson had just been on Broadway with the role,” Gaug said of “King Lear.” “I also saw part of it on a PBS station with James Earl Jones and thought the storm scene looked enthralling.”

Kurtz portrayed “Richard III,” giving the "Now is the winter of our discontent" speech on Higgins’ suggestion. And Finn presented the porter's speech from “Macbeth” after playing the role in an EastLine production. Bjelland presented Mark Antony's funeral oration from “Julius Caesar,” which he said “exemplifies the art of rhetoric and power of persuasion.”

Bruzzo picked Iachimo, from “Cymbeline,” largely because that was the last play available. Iachimo creeps into a woman’s bedroom to gather evidence to prove he slept with her, after betting her husband he could successfully seduce her. “Yup,” Bruzzo said. “That’s Shakespeare.”

It might seem incongruous to see Shakespeare performed outdoors amid driveways and tool sheds, gardens and garages. But Higgins points out that Shakespeare originated al fresco.

“These monologues were designed to be performed outside,” he said. “Elizabethan theaters were open-air theaters.”

The Shakespearean speeches have distinctly suburban settings in EastLine’s project, giving them a literally grassroots feel. Finn set his performance near his tool shed and rose garden. Kurtz wanted to perform at the beach, but she said lockdown at that time made it impractical to record at any public outdoor location.

“I made a beach by playing beach sounds on my computer, making a fruity drink and dressing as a beach diva,” she said.

She shot the monologue on her cellphone with the help of a “Rube Goldberg-type arrangement,” including a tray and table along with 18-inches of wire and a column lamp. “I was under an awning,” Kurtz explained, “because I had to record on a rainy day.”

Bruzzo shot his video from inside as he peered in through a window. “Even though it’s set in a bedroom, the theme of the project was outdoor settings,” he said.

Performers typically dressed for the role with varying degrees of sartorial splendor.

“Fortunately, I had my porter's costume here at home. A pair of tux tails can come in handy,” Finn said of his reprise of an earlier EastLine role. “I accessorized with my gardening cap and garden tools.”

Kurtz said “clothing pieces and prop pieces” she had at home inspired her “flipping gender” to do the speech. She looks very much like a vacationer, or staycationer, as she delivers famous lines.

“I had a large sun hat that had the words ‘Hello Beaches’ stitched on it,” she said, and “outrageous sunglasses.”

Sill, not everybody dressed the part. “I was going to wear a costume, but decided to wear just my black jacket,” Gaug said.

“Shakespeare’s work is already timeless,” he said. “These plays and monologues have survived because of the potency of characters and the words they say and how human they are.”

While actors may have acted alone (sometimes with help from a spouse, significant other or friend), they felt characters remained relevant amid the pandemic.

“I think that Shakespeare still resonates today,” Gaug said. “His themes, his characters, the struggles, the love of beauty, the hope for goodness and justice.”

Bruzzo said Shakespeare reminds us that human nature hasn’t changed much, if at all, over centuries. “People need to see that history is not some evolution to some new state of being for humans,” he said. “We have always been the way we are.”

In the EastLine performances posted on social media, actors have gotten views and reactions, though from a distant audience. “I got good feedback,” Gaug said. “A few young actresses hope we will do ‘Lear’ together so they can play the daughters. That would be awesome.”

Finn said he was told his “monologue was very entertaining and funny,” and Bruzzo, who teaches English at Valley Stream Memorial Junior High School, was motivated to ask students to do their own Shakespeare projects.

“Some of my students produced beautiful, visual, musical and dramatic interpretations of ‘Romeo and Juliet’ during online, quarantine learning,” he said. “Some of it was truly inspiring. So ‘corona’ didn’t kill Shakespeare.”

While some actors summoned a time centuries ago, Bjelland tried to make his performance contemporary, as he delivered a classic Shakespearean speech near siding.

“Someone who watched it said he felt like he was receiving a pirate guerrilla transmission, and I'm glad because that feels right for the scene,” he said. “In ancient Rome, Mark Antony delivers his speech to a crowd of plebeians. I was doing the 2020 version, right into the camera for Romans streaming live or watching on Zoom.”

'In the Yard' sequel?

EastLine’s loss of its space helped it find a new venue during the pandemic, spreading the word about William Shakespeare in byte-sized monologues.

“I hope it showed some people not normally inclined to appreciate Shakespeare that it's not all pomp and high British culture,” Bjelland said.

While monologues from each play that EastLine is including in the project have been performed and posted, Higgins plans a compilation video that will be posted on YouTube.

And he wants to create a Shakespeare sequel to give this project a longer lease on life, bringing back the Bard via Shakespearean monologues next May, which is Shakespeare’s birth month.

“Every year we’re going to do this, COVID or not,” Higgins said. “We’ll ask people to produce these online monologues that we can publish on our social media sites.”

To watch videos of EastLine’s Shakespeare in the Yard productions, visit the theater company’s Facebook page at nwsdy.li/EastLineShakespeare.