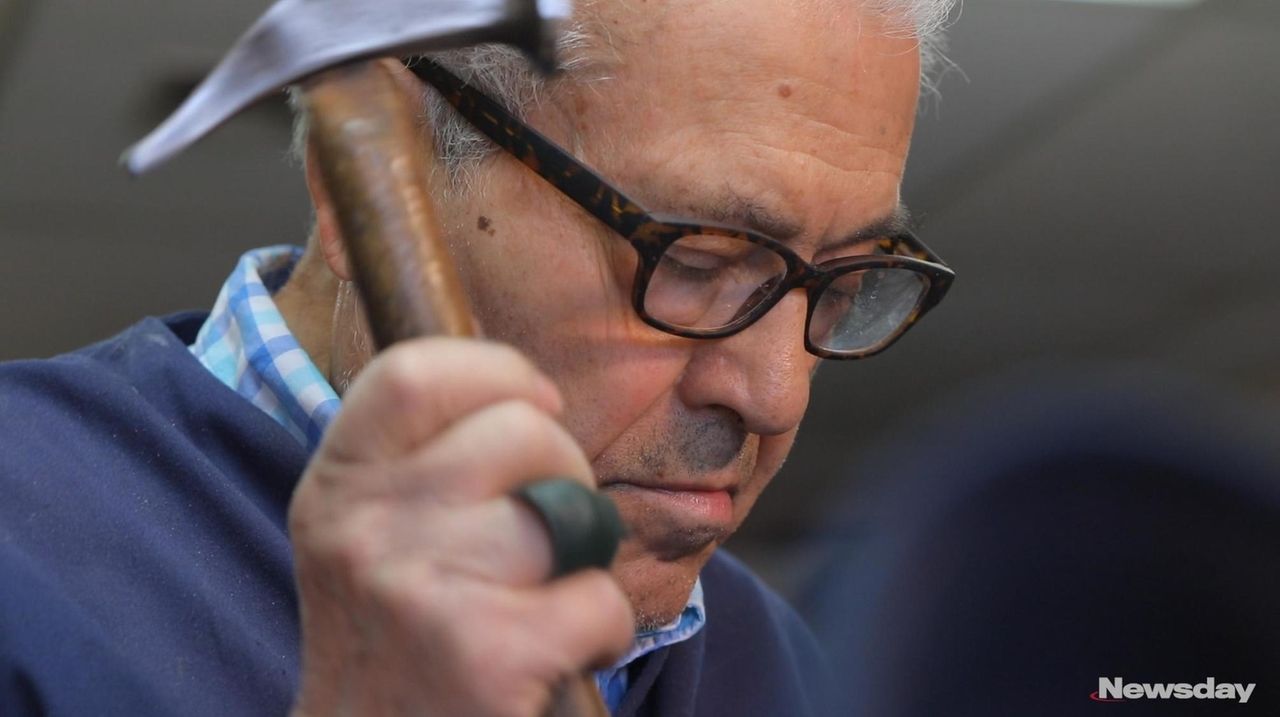 Andrea Sorrentino has literally followed in his father’s footsteps. Growing up in the small Neapolitan town of Poggiomarino, Italy, Sorrentino was 7 when his father, Pasquale, began teaching him the art of shoemaking. For 35 years, Andrea’s Shoe Repair has been a mainstay in downtown Huntington. “I don’t get bored because I know what I do,” he explains. “That’s my trade. I never changed one day since I came to this country or in Italy.” Credit: Jeffrey Basinger

Andrea Sorrentino has literally followed in his father’s footsteps.

Growing up in the small town of Poggiomarino, in the Neapolitan region of Italy, Sorrentino was 7 when his father, Pasquale, began teaching him the art of shoemaking.

He must be right. For 35 years, Andrea’s Shoe Repair has been a mainstay in downtown Huntington. Six days a week, Sorrentino can be found working in his small shop surrounded by heaps of sandals, loafers, lace-ups, pumps and boots. Shelves overflow with footwear, handbags and belts. Distinct aromas of leather and glue permeate the air in the Union Place shop.

Pictures of his family and native Naples line the walls. To the accompaniment of Italian song standards, Sorrentino removes nails with pliers or bangs them in with a hammer, often using an ever-handy shoe hold, on which he places the shoes upside down to stabilize them. A leather-cutting machine and a punch cutter round out the tools of his trade, which these days is mostly repairing shoes.

“I don’t get bored because I know what I do,” he explains. “That’s my trade. I never changed one day since I came to this country or in Italy.”

After being taught by his father, Sorrentino went to Naples when he was 18 to work at a shoe factory. About two years later, in 1955, he married his childhood sweetheart, Luisa, whom he’d met when she was 5 and seamstress’ apprentice to his mother.

“In Italy they didn’t have a lot of work. That’s why I came to this country,” he says.

The couple lived with Luisa’s grandfather for a few months. Later, after renting for a while in Huntington, they bought a home where they still live. Sorrentino got a job as a cobbler at Huntington Shoe Repair, also in the village, and at night and on weekends he made orthopedic footwear in his basement.

In 1983, he opened his shop on a block now mostly populated by Italian businesses.

“He’s actually a ‘shoemaker,’ ” says Steve DiRaimo, 49, owner of nearby DiRaimo Pizzeria. “He doesn’t do it too much anymore. He used to do prosthetics. Doctors would send patients over if you had one leg longer than another.”

Among the unique requests over the years: a man’s size 18 shoes, and specially designed shoes with leg-brace attachments to help a young girl walk again.

Sorrentino still makes sandals and slippers for his two granddaughters, Mia, 9, and Andrea, 3, who likes to show off her grandfather’s handiwork, says Pat Sorrentino, the girls’ uncle and Sorrentino’s older son.

“Every month there’s a new pair of shoes here,” says the girls’ father, Andre Sorrentino, 53. “He came out of retirement of shoemaking for them.”

A regular customer, Terry Barone, who met Sorrentino in the 1970s through her aunt, comes in with two pairs of sandals that have gotten loose. Sorrentino adds two extra holes to each strap as they chat. “How much?” she asks, her wallet at the ready.

“Don’t worry about it,” he says, waving her away.

They banter until he eventually relents, allowing her to slip him some cash.

Sorrentino is stationed behind a three-sided counter surrounded by piles of shoes, most sporting little beige numbered tickets.

“When you walk in there, all you see is mounds and mounds of shoes,” says Lisa Hodes, 52, of Huntington. “He’s amazing because you go in there to pick up your shoes and he just pulls one out of the mound as if he’s a magician. And poof, here’s your shoe.”

For Sorrentino, the shoe business is really quite basic.

“They come to see me. They need something. If I can help with something, I do.”

For nearly 40 years, DiRaimo and Sorrentino have supported each other both as friends and as customers.

“I bring my shoes over there. He goes over here for lunch. My dad goes over to talk to him,” DiRaimo says.

They’ve even spent part of their vacations together. During a trip to Naples, the DiRaimos visited the Sorrentinos’ family home in Poggiomarino while Andrea was there, too.

“He’s one of a kind,” says Robert Schwartz, 52, Sorrentino’s next-door neighbor and tenant.

“A lot can be learned from a man who has taken his craft as far and as long as Mr. Sorrentino, without social media, Google and Facebook.”

Schwartz recalls a time when someone came in — without a beige ticket — to pick up his friend’s shoes and ended up with the wrong pair.

“He knew his customers well enough for me to drive him to the client’s house to give his client the correct shoes,” Schwartz says. “Knowing his customers is his forte . . . There is simply no one like him, and never will be again.”

Sorrentino accepts with equanimity that his is a dying trade.

“Nobody teach anymore,” he says. “The kids don’t want to do this job.”

In fact, years ago his two sons weren’t exactly welcomed into the shop.

“When they were small, I chased them out. I didn’t want them to get in the way.”

Pat Sorrentino, however, fondly recalls the times when he’d bring over bagged lunches his mother had made for him and his dad while he still worked at Huntington Shoe Repair. Andrea would toss out the peach pits in the alley where they sat and ate, and Pat would marvel how they would later take root.

“He had all these peach trees growing in the alley,” Pat recalls. “When he left [to open his own business], he had to leave the peach trees.”

These days, the peach trees have been replaced by a few sturdy potted lemon and orange trees that grow in the sunlight streaming through the window of Andrea’s own shop. He adds their fruit to his water.

Because they were only interested in cars, Pat and Andre never considered learning their dad’s craft, opting instead to run an auto repair and body shop in Huntington.

“Now that I think about it, what it would have been like,” Pat says, adding that “without him, we would never be where we are today.”

“My father didn’t really want us to do what he did,” agrees Andre, adding that in retrospect he wished he had learned the shoemaking trade.

“It’s old school. Those guys, they all hang out — DiRaimo, my father, ‘Mr. Sausage,’ ” he says, referring to the owner of an Italian food shop on one end of Union Place. “They work hard, but they hang out and have a good time at what they do. There’s a lot to be said for that.”

As he nears eight decades working at his craft, Sorrentino says he has no plans to retire. “I enjoy what I do. I don’t know how to do nothing else,” he says.

To this day, Sorrentino takes pride that his father approved of his learning the family trade.

“He was happy, because I do good.”

Try something new: Recent LI restaurant openings
What to eat (or not) at LI's first Top Golf
10 new LI restaurants to try this fall
Vegan pop up market comes to LI communities
Didn’t find what you were looking for?