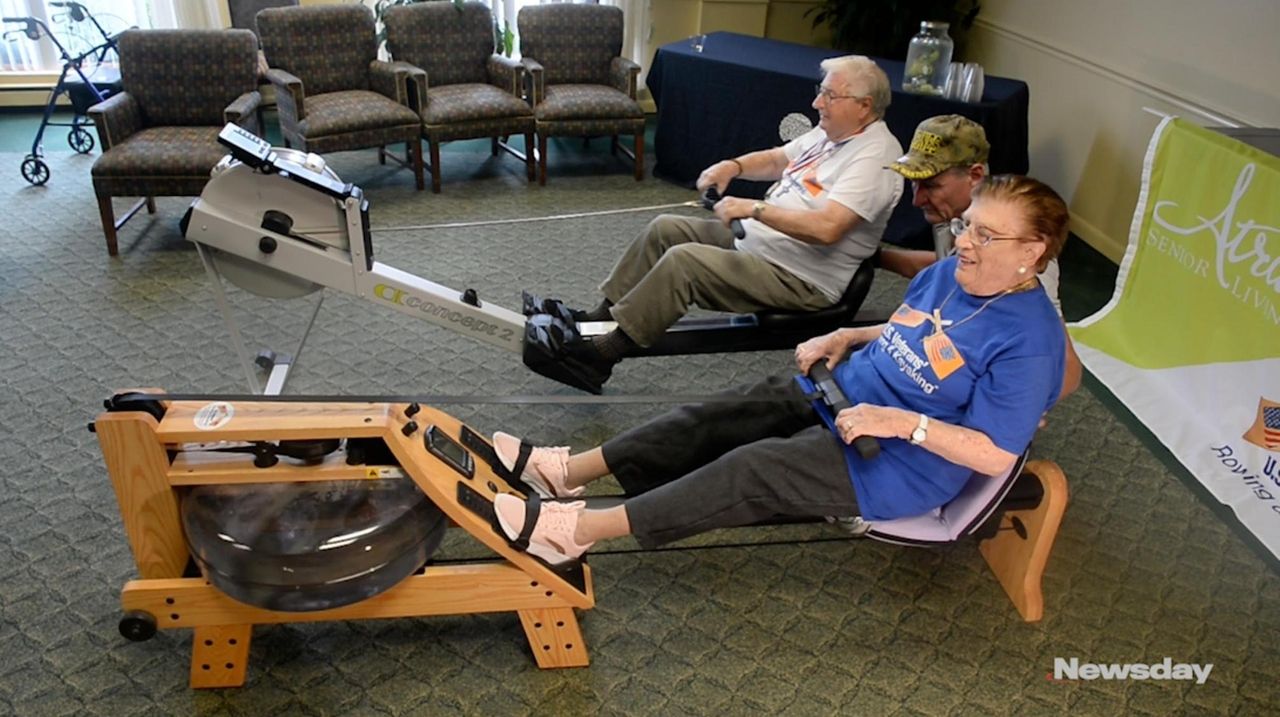 What began seven months ago as an endeavor to get the residents at Atria Senior Living’s Long Island communities active through indoor water rowing has turned into a quest to set world records.

“The program just blossomed; it’s amazing,” said national program services director Paul-Stephen Varszegi, of U.S. Veterans' Rowing and Kayaking Foundation, a Trumbull, Connecticut-based nonprofit group that aims to rehabilitate wounded veterans. Two and a half years ago, he and Becky Gallucci, Atria’s divisional Engage Life innovation director, introduced rowing to the Darien, Connecticut, community. Since then, the program, which was initially intended for Atria veterans and their spouses, has been opened to all residents and expanded to Long Island and to two Westchester communities.

At the World Record Challenge on Nov. 3 at Atria East Northport and Roslyn on the Harbor, 26 competitors — ranging in age from 78 to 102 — will be vying to set world records in indoor rowing in their age categories and are poised to make history. The competitors, who make up Atria Team Long Island, are residents of six Atria Long Island communities.

On any given weekday, these seniors can be found training to be the best in the world. And in the process, experts say, they are reducing their risk of falling and developing — or worsening — diseases. Since the program was launched, 12 rowers — one of whom is 103 — from Atria Darien and Westchester have broken a combined 25 American and world records.

“We provide our residents with experiences they never would have enjoyed if they remained in their private home,” said Gallucci, adding that Atria is the only senior living community in the nation that offers such a program. “They feel better after rowing. It’s the physicality of rowing and some of that is the social aspect, the camaraderie and the goal setting that occurs. All of that combined is a motivation for them to continue the program.”

Cristina Crawford, a spokeswoman for the Washington, D.C.-based National Center for Assisted Living, which represents more than 4,200 U.S. communities, echoed Gallucci’s comments. “Exercise is incredibly important as people age. Designing exercise programs with a social component has added benefits because socialization helps with both physical and mental health.”

At the Atria on Roslyn Harbor, four days a week at 1:30 p.m., Ellen Notaro takes her place on the indoor water rower, a training machine that uses a water tank to create resistance. The former Manhasset resident and grandmother of four who lived in Boynton Beach, Florida, before moving to the senior community three years ago, is training to beat her personal best of 5,000 meters, a distance that typically takes her about 45 minutes to complete.

To increase her overall strength, she works out with a personal trainer twice weekly and boasts about showing off her newly developed biceps to her grandson. “This makes me feel like I can accomplish something,” Notaro said. “People might say ‘this hurts and that hurts.’ They can find more reasons not to do it.”

Fernand Neuenschwander, a resident at Atria South Setauket, is not one to shy away from the rower. The 87-year-old, a self-confessed “competitor at heart” who “enjoys winning,” has already garnered a silver medal in a 500-meter “in-house” competition at Atria held for 40 rowers in May. Since the great-grandfather and retired tool designer has been training, he said he is “more alert” and hoping to one day walk without his cane.

One day he just might. Experts say while rowers are enjoying the physicality of the low-impact sport and camaraderie of being part of a team, they are also improving their overall health. “There are numerous health benefits of rowing,” said Barbara Resnick, a gerontological nurse practitioner, past president of the Manhattan-based American Geriatrics Society and chairwoman in gerontology at the University of Maryland School of Nursing. “It increases blood flow to the brain, improving alertness and providing a cognitive benefit. There’s increased range of motion, upper and lower extremity strengthening, and with strengthening you get improved balance. More people fall because they sit in a chair all day … You can’t be too old to exercise.”

At the World Record Challenge, some residents on Olympic rowing machines will cover distances of 100, 500, 1,000, 2,000 and 5,000 meters. Other rowers will stress speed and compete in 1-, 4-, 30- and 60-minute sprints in female and male and lightweight and heavyweight categories.

Herbert Chavkin, 97, is anticipating a victorious four-minute time record on Nov. 3. But the retired pharmacist, who plied the waters of Roslyn Harbor in a kayak for more than 50 years, said he would “row whether I win or not.”

A former marathon runner, who scored a gold medal in the 500-meter race in Atria’s in-house competition, Chavkin said he is eager to spread the word about rowing. “I tell the other residents, ‘Come upstairs and let’s go rowing,’ ” said the great-grandfather sporting a “smart” fitness watch. “And if someone passes by the door of the rowing room, I invite them in.”

Coach Varszegi said Atria rowers in Darien and Westchester have reshaped the record books for competitors ages 80 to 103. “And the majority of our Long Island athletes will set records this Saturday,” he predicted.

He explained that world record books for the sport are filled primarily with students in junior and senior high school and college, and adults ages 20 to 79. “When we came along and brought in the older folks, the highest age category was 90 to 99,” he said. “There is no other country that has veterans or spouses of veterans setting world records over the age of 100.” He added that the World Challenge is historically significant and promises to be the “largest gathering of seniors 78 and older to come together to break world records.”

One of 25 residents who Varszegi expects to snag a medal is Virginia Hartt, 87, a resident of Atria East Northport. “Virginia does 33 strokes a minute. That’s phenomenal for someone of her age,” he said. “Olympic champions can row 38 to 40 strokes a minute.”

The grandmother of four, who grew up rowing with her father on Northport Harbor, downplays her athletic prowess and said when she rows she’s less concerned about setting records and more focused on “thinking about being out on the water.”

“I like hearing the water when I row,” said Hartt, referring to the splashing sounds of her water rower and the virtual rowing she watches on a nearby video screen.

As the rowers put the final touches to their training, Atria’s’ Gallucci has her sights set on partnering with a Long Island rowing club next spring so that residents will be able to row on the water.

“The entire outdoor experience of transferring what they’ve been practicing indoors to putting it into motion on the actual water is affirming of everything they’ve been doing,” said Gallucci. “It’s yet another accomplishment and goal achieved. It’s yet another milestone at this stage of their lives, which is quite extraordinary.”

How to cook the best pork chop
New Mexican restaurant opens in Seaford
LI restaurants serving great soups
Didn’t find what you were looking for?