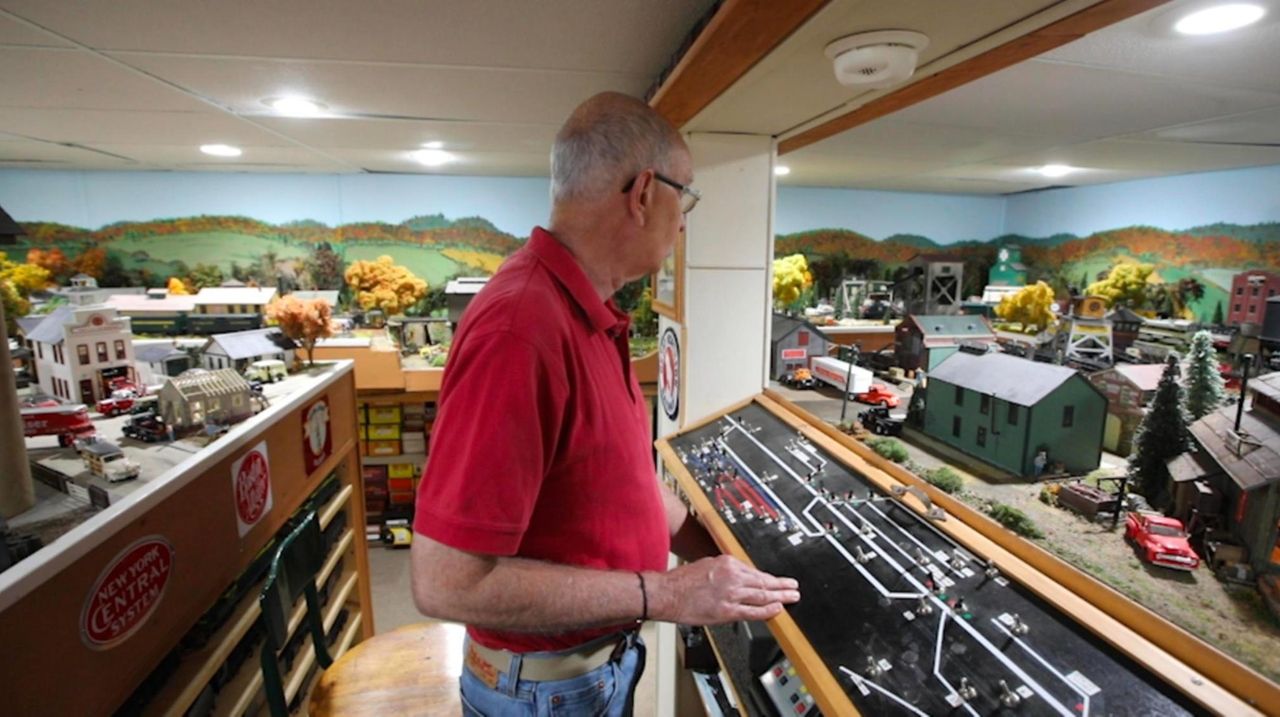 Jack Smith of Port Jefferson Station received his first train set as a child  — and never gave up the hobby. The upstate New York and New England scene in his basement was inspired by summer vacations with his family.  Credit: Barry Sloan

Like a lot of baby-boomer kids, Jack Smith had model trains growing up in the 1950s. But unlike most children of the era, he never drifted away from the hobby.

Smith, 71, still has his original Lionel set from 1956 displayed on a shelf in his basement.

"It still works," he noted. He occasionally runs it on his basement layout or upstairs on his temporary annual Christmas layout.

The 17-by-20-foot miniature world that occupies half the basement of his home in Port Jefferson Station is filled with such impressive structures and landscaping that it has been featured in several model railroading magazines.

And Smith is so adept at creating realistic scenes that the Railroad Museum of Long Island in Riverhead called on him more than a decade ago to repair the scenery in the layout it acquired from Lionel Corp.’s Michigan headquarters.

Smith’s New England-in-the-fall-themed display is the third layout he has constructed in his house since he and wife, Pamela, moved there in 1981. The retired teacher managed to extend it in the past year by adding a 1-by-12-foot section.

"Now I’m done," he said. "There’s no way I could expand it," he said, noting that he did consider and reject removing a wall. That would’ve meant relocating plumbing and the spray booth, where he paints trains. "It would be a lot of work. I’m very content with what I have here. It’s fun. I get a big kick out of it."

Smith calls his model domain the New York & New England Railroad. It was inspired by a real but now defunct line of the same name that connected upstate New York with Providence, Rhode Island, and Boston. It was eventually absorbed into the New York, New Haven & Hartford Railroad.

"It’s approximately 1945 to 1957, which is when they started to introduce second-generation diesels, and steam by that time was all but gone in New England," Smith explained. "So it’s the steam-to-diesel transition era." That allows him to run replicas of steam locomotives and early diesel engines.

The continuing allure of doing that, Smith said, is "the design of them, the realism, the motion, the noise, the action, and just the idea of creating your own little world the way you want it. It’s a multifaceted hobby.

"Doing scenery is my biggest passion," he said.

Smith developed his model railroading passion when he was just a kid. "I got my first Lionel set in 1956 when we were living in Brooklyn," he said.

His father paid $25 for a closeout Lionel steam locomotive freight train set. "My father was an electrician apprentice, so that $25 was a lot of money in those days. We were people of modest means, and for him to plunk down that kind of money for a Lionel train set, he must’ve seen something in me."

When Smith’s father set up the trains in the living room of their apartment, "I was totally enamored by it," he recalled. "The next year we moved out to Centereach and the builder had left a whole bunch of lumber in the basement, and my father decided to build me a train layout in the basement when I was 7. I really took to it. Every year, pretty much, my uncle Frank would buy me a car," he said.

Smith augmented his collection by buying trains cheap from neighborhood kids no longer interested in the hobby, and friends’ parents sometimes simply gave him trains their sons no longer played with.

"I kept it up until I went to college, but I saved all the trains and pieces," Smith said. "It was always my dream to have a layout in the basement."

In the late 1980s, his father, Jim, and his brother, Tom, who had built a layout in his own basement, prodded Smith, saying, "What are you waiting for?"

With that push, Smith said, "I finally got my act together, and I had set aside a section of my basement to build a layout, so I did in 1989." He created a postwar-vintage layout on two levels with "a lot" of Lionel accessories that filled a third of his basement.

When many model railroaders finish a layout, they soon tear it apart and start anew because they think they can improve on it or they like the process of creation as much as running trains. Smith fits both criteria.

His second layout was called the Peconic River and Orient, a more realistic track with properly scaled trains and no oversize postwar Lionel accessories. But he wasn’t satisfied.

"I felt I had taken it as far as I could," he related. "It was OK, and it had been written up in a couple of magazines, but there was new stuff coming out and I felt I could do better."

So Smith, who retired in 2005 after 31 years as a high school special-education teacher at Eastern Suffolk BOCES, decided in 2006 to dismantle the second layout, sell some trains and accessories and give away many old buildings.

He wanted to start with a "blank slate," Smith explained, so he moved all of the model railroad inventory he wanted to keep into a climate-controlled PODS storage unit.

"That was an eye-opener," he said. "I filled it three-quarters high, so I realized I had too many trains" — then sold more trains. "And I also rented a storage unit to keep my buildings in because they were more fragile."

The new layout, his blank slate, would depict only New England and upstate New York, he decided.

"I had trains from all over and different eras," he said, which he sold because they were not relevant to the new design.

"New England is my first love, ever since I was a little kid. Every summer my parents would vacation in New England. Eventually when they retired, they moved up to New Hampshire and built a house on Lake Winnipesaukee," he said. "So I always had New England in my blood, and I loved the trains. I would see the New Haven and the Boston & Maine."

To create more model railroad space in his basement, he removed an oil tank and then repaired and repainted the wall.

"I came up with a new track plan and started the ‘benchwork’ [wood framing that the supports the layout]," much of it repurposed from the previous layout, he said, "and off I went."

He painted a backdrop depicting New England in the fall. "I’m not an artist," Smith said, so the wall is now covered with his impression of fall foliage.

The layout is considered O-gauge, or more specifically "O-gauge scale high-rail," with everything on the same scale — 1/48 of actual size — except for the track, which is oversized.

For Jack Smith, creating the railroad scenery is the best part, either from scratch or by "kit-bashing." | Photos by Barry Sloan

‘Not looking for easy’

Smith’s layout has a main line with several passing sidings and spurs for industries. He can simultaneously run two trains comprised of postwar and modern trains from multiple manufacturers, including Lionel and MTH.

Some of his buildings are "scratch-built" and others are "kit-bashed," meaning he combined kits and customized pieces to make his own structures. Scratch-built buildings include a coal storage tower made from cardboard carpet tubes and painted to resemble a structure Smith saw near upstate Saratoga.

When he uses kits for buildings, he likes to customize. "I’m not looking for easy," he explained. For example, a train station kit became the town hall and jail in his fictional business district.

One of his favorite structures is an old mill that he customized from a kit and placed on a stream by a waterfall fashioned from acetate that he covered with clear caulking and white paint.

Another favorite kit-bash is the Sawyer River Lumber Co. mill and lumberyard complex. "It took me all summer to make that," he said.

When Smith concocts a name, it usually has a personal connection. His scratch-built Macintyre Machine Shop, for example, was named for his seventh-grade metal shop teacher. "J. Yacht," the name of his grandparents’ and parents’ family physician in Brooklyn, adorns the kit doctor’s office.

The most unusual aspect of Smith’s layout is how the switches operate. Unlike most model railroad switches, which operate by electricity, Smith’s are powered by compressed air, which is more reliable. He has a little compressor and a storage tank under the layout. "It’s so simple," he said. "It’s old school. This technology is from the 1950s."

When he wants to run trains, often with family, friends and neighbors, Smith has plenty of choices. He estimates he has about 100 engines and up to 300 cars displayed on shelves that line the walls or stored under the layout. "I had a lot more before," he said. "I got rid of a lot of stuff."

Model trains are not Jack Smith’s entire universe. He and his wife have traveled extensively, including a 2019 four-month world cruise. He’s also into photography and gardening.

Pamela, 68, Jack’s wife of 41 years, appreciates her husband’s train habit. "I think it’s great," she said. "It keeps him busy. And I always know where he is."

Smith said, "It’s a fun hobby. It’s all about having a good time and enjoying it. I’m down here several times a week. It’s very relaxing. I just sit here and watch them go."

As the holidays approach, trains will take up even more of his time. Next month, Smith will set up a layout around the couple’s Christmas tree. It goes up a week before Christmas and comes down on New Year’s Day.

"It’s nothing real fancy," he explained, "but I’ve never missed a year."

Jack Smith works to create a building, left. The 17-by-20-foot miniature world that occupies half the basement of his home in Port Jefferson Station is filled with such impressive structures and landscaping that it has been featured in several model railroading magazines. | Photos by Barry Sloan