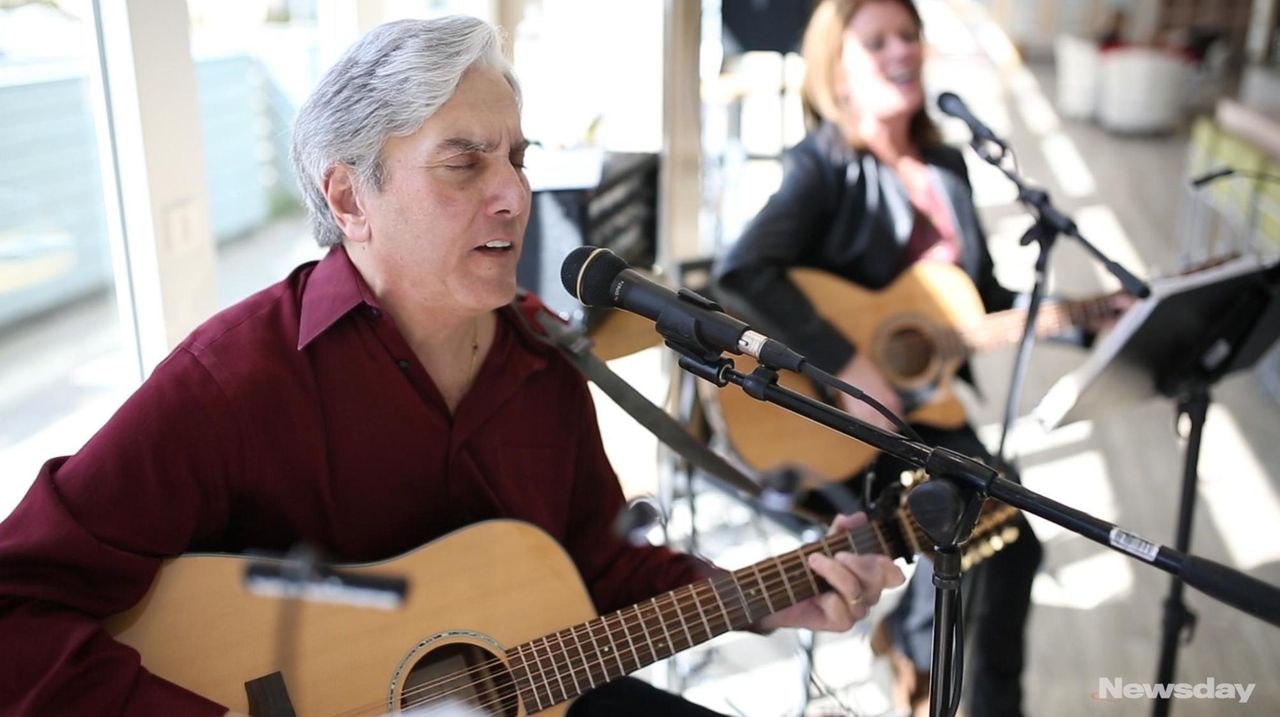 John Carrozza of Rockville Centre retired in 2013 and decided to pursue his dream to perform.  Carrozza and Carol Lane formed a duo called Handful of Chords, and they sing and play guitar at various clubs on Long Island. Credit: Barry Sloan

In 2009, with the financial crisis looming, Jeff Lambert took a buyout and retired early rather than risk being laid off down the road. But the thought of not having a daily routine and leaving the job he loved filled the Hicksville resident with angst.

For about 35 years, Lambert had run a support services program for disabled students on Long Island University’s Brooklyn campus, where he had also taught special education, guidance counseling and psychology.

“I felt I was at the top of my game and knew how to find solutions quickly,” says Lambert, 70.

But transitioning to retirement proved far easier than he had imagined. Having spent more than two decades voluntarily training puppies that would become guide dogs, he and his wife, Ellen, 68, a retired special-education teacher, reached out to a guide dog center to see whether it needed volunteers. In response, the center gave the Lamberts a canine that was tagged to sire other guide dogs.

“After a year of breeding, Shannon became our regular dog,” Lambert says.

More than just their personal pet, Shannon accompanies the Lamberts on their visits to schools, community centers and houses of worship to demonstrate the quality of life and dignity that guide dogs bring to the blind.

“I’ve discovered that there is indeed life after retirement,” said Jeff Lambert. On an as-needed basis, he also voluntarily conducts practice job interviews with students at the Helen Keller Center for Deaf-Blind Youths and Adults in Sands Point.

Lambert was like many Long Island boomers facing that new chapter in their lives called retirement. While they are delighted to bid farewell to long commutes, urgent deadlines and long work hours, they worry about filling the seemingly endless work-free days that lie ahead and missing the sense of pride and purposefulness their jobs afforded them.

But, according to Long Islanders who have advanced to that next chapter, retiring is one of the best things they have ever done. By seeking out opportunities that speak to their interests or values, they are spending their waking hours in a wide range of life-enriching activities, including participating in community theater, studying a foreign language and volunteering in places that utilize their professional skills.

“It’s important for people’s health, sense of purpose and self-image to find things that are meaningful, engaging and hopefully challenging as they consider what they want to do later in life,” says Paul Irving, a former law firm partner who now serves as chairman of the Milken Institute’s Center for the Future of Aging in Los Angeles and is the distinguished scholar-in-residence at the University of Southern California’s Davis School of Gerontology. Unlike a generation ago, when individuals left the workplace and found themselves separated from their community and the activities they enjoyed, the “new narrative is purposeful aging,” which can be achieved with new and inspiring experiences, including volunteering, he says.

When Glen Head resident Judy Novick, 62, retired in 2016 after working as a social worker for 36 years, she knew exactly what she wanted to do next — share her enjoyment of Scrabble and Mah Jongg with seniors, one of her favorite demographics during her employment years.

Before she retired, Novick visited assisted living centers, where she filled out volunteer forms and indicated the days she would be available and the activities that interested her. “By the time I left my job, I was ready to start volunteering three days a week, two to three hours a day,” Novick says.

These days, Novick plays Scrabble at Sunrise of Glen Cove on Tuesdays; Scrabble or Mah Jongg on Wednesdays, also at Sunrise; and Mah Jongg on Thursdays at Atria on Roslyn Harbor. On Thursdays, she also leads a current events discussion group at Sunrise. Plus, if Novick notices a change in a senior’s alertness or mood, she notifies the professional staff.

“I’m still using my skills, which is great, but on my own terms by doing what I love without overprogramming myself,” Novick says. Her husband, Dennis, 68, a retired administrator in the city’s health-care system, pursues his interest in singing — taking lessons and as a member of a men’s chorus.

Since retiring last year, Merrick resident Gus Psillis, 77, has not given a second thought to his 50-year career as a financial adviser. No longer obligated to address clients’ immediate concerns or forgo extended vacations, he relishes having the time to do what he enjoys most — regardless of the amount of time involved.

Besides playing golf, working out at the gym and traveling, Psillis makes miniature dioramas of notable battlefields, including Valley Forge and Waterloo, and pre-battle campsites, like that of the Anglo-Zulu War. He deploys store-bought figures while offering his interpretation of the battle scene, as in the topography of the soil. Once a month, Psillis also meets with artists, collectors and fellow history buffs at the Freeport Rec Center for the Long Island Miniature Collectors Society. He displays his creations in his home and once year at a show in Freeport.

Psillis’ interest in battle scenes was first ignited many years ago on a visit to Paris, where he purchased cavalry figures as a collector. It was a weekend golf trip to Valley Forge a decade ago that led him to buy revolutionary figures, including George Washington, and assemble them in dioramas. “It’s a hobby because of my interest in history,” Psillis says.

Despite his myriad activities, “there is downtime, and I’m reading or just relaxing,” Psillis added rather contentedly.

His wife, Olga Kontzias, 71, who retired five years ago as an executive editor of fashion and interior design college textbooks, not only indulges her passion for culture with trips to museums, tickets to shows and French classes at Berlitz in Garden City, she has taken up fiction writing and has taken writing courses to finesse her skills. A trip to Paris in June will include research for a novel in which the main character is an interior designer.

“I write every day — anywhere, even on the train,” Kontzias said. “Retirement has given me time to do what I want to do and never had time to do.”

A STAR IS REBORN

Since John Carrozza, 60, retired in 2012 from a career in TV advertising sales, he not only has enjoyed the increased time with his family, but has reembraced his passion for music and acting.

Carrozza, who played the guitar in bars and clubs while an undergrad at Iona College in New Rochelle, is now half of an acoustical duo with Carol Lane, an assistant professor in Farmingdale College’s business school. The two perform at places like the Long Beach Hotel, where they have a gig on Saturday, and the Allegria Hotel in Long Beach, where they’ll perform May 11.

A one-time struggling actor, Carrozza was bitten by the acting bug in college and earned a master’s degree in theater from Villanova University. He abandoned his theatrical aspirations in his mid-20s in favor of earning a steady paycheck. “I was leery of waiting too long to ‘make it,’ and then have nothing to fall back on,” says Carrozza, who lives in Rockville Centre. “I had set a guideline for myself of age 27 to make a decision. Just before I turned 27, I was offered a full-time job and took it.”

Now that he’s retired, Carrozza has finally gotten back onstage and, over a four-year period, has appeared in 10 community theater productions, including “Who’s Afraid of Virginia Woolf?” in 2015 and “12 Angry Men” last month in East Williston.

“The best feeling is when someone says, ‘I like your performance,’ or [mentions] something else I was in,” says Carrozza. “At that point, I feel like Al Pacino.”

Whether you have already stopped working or are planning to do so, here are some tips based on interviews with Long Island retirees on how to have a happy Act 2.