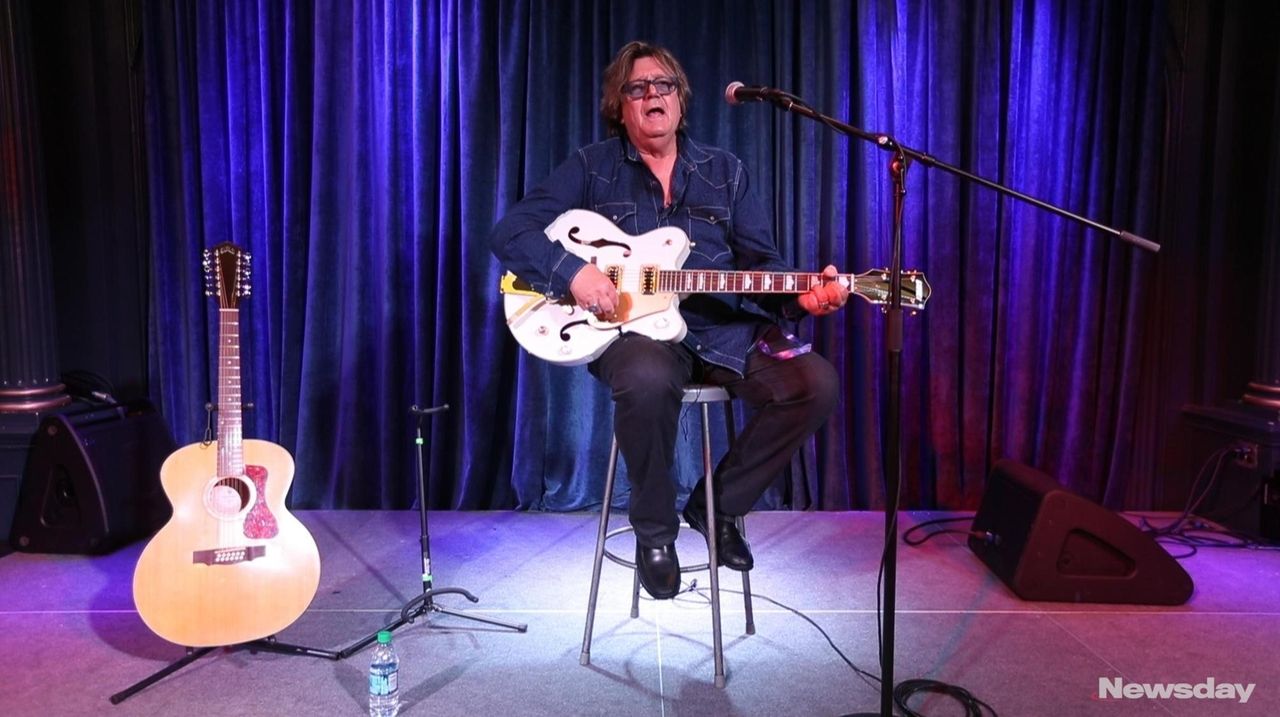 Billy J. Kramer, a British pop singer in the 1960s talks about making music with the Beatles and plays some of his well-known songs at My Father's Place in Roslyn.  Credit: Michael Owens

In August 1963, Billy J. Kramer turned 20 with a celebration unlike any other. After he and his group The Dakotas opened for The Beatles during a tour stop at The Gaumont in Bournemouth , England, the group's manager Brian Epstein threw a birthday bash in which the Fab Four were among the guests. The Liverpool native also couldn't have asked for a better present — The Dakotas’ single “Bad to Me,” written by John Lennon and Paul McCartney, was at the top of the pop charts in the United Kingdom.

For his 75th birthday, Kramer, who now lives in Plainview, will be singing that number again, along with his other hits like “Little Children” and “Do You Want to Know a Secret?,” when he takes the stage Saturday night at My Father’s Place, the supper club at the Roslyn Hotel that reopened in June. The icing on the birthday cake will be performances of Kramer’s original songs and stories about his friendship with the Beatles.

That’s not surprising. Kramer’s lean early years involved doing sets into the wee hours. And his prime years with The Dakotas were marked by creative differences with those band members as well as Beatles producer George Martin. Still, Kramer exhibits no bitterness. From the time he was a child who would break into song at family gatherings, music had been Kramer’s passion.

“He’s an entertainer, and he’s a rocker, even at his age,” said “Eppy” Epstein, founder of My Father’s Place.

The world of show business was nothing Kramer imagined from his austere beginnings in Liverpool, where his father worked on the docks to support seven children.

“We never had a phone until I was doing well. We didn’t have a car. We didn’t go to restaurants,” Kramer said.

A shy child, Kramer found solace in music. In addition to singing for family and friends, he joined the school choir, which performed at festivals and in competitions.

By the time he was 16, Kramer was an apprentice with British Railways by day. At night, he donned a gold suit to perform with his group The Coasters, singing covers by Elvis Presley, Buddy Holly and others. “We were just kids playing around,” he said.

By the early 1960s, the Beatles were starting out, and Kramer often landed bookings in the same clubs. “When Paul McCartney started singing, I just thought, the game’s up,” Kramer said. “I thought I could be good, but I can’t beat that. I remember walking home with my friends, and I said they’re going to be bigger than Elvis.”

At those gigs, Kramer caught the attention of Brian Epstein, the Beatles’ manager. “When I first had a meeting with Brian, he said ‘what do you want to do?’ I said ‘I want to become a good singer and an entertainer, and I want to get to a position where hit records don’t matter, that people appreciate you for what you do,’ “ Kramer said.

After discussing the offer with his father, Kramer accepted. Epstein’s first order of business: “He told me to lose the Christmas tree,” Kramer recalled, referring to the gold suit.

There was one problem: The other Coasters didn’t want to continue in the music business, so Epstein had to find a new group for Kramer. Enter The Dakotas.

Things began on a rocky note when Epstein decided to bill the group as Billy J. Kramer with the Dakotas. Likewise, Kramer didn’t feel a lot of confidence working with Beatles' producer George Martin.

“George Martin said I wasn’t a very good singer. Well, I am, and for him to make that comment annoyed me,” Kramer said. He recalled one recording session in which he struggled to perform a song in the key Martin requested. “When that didn’t work, we finally changed the key, and it did. George Martin was a very good producer, and he did wonders with the Beatles. I don’t want it to sound like sour grapes, but I know if I was working with a kid and he was struggling, I’d help him. That wasn’t George.”

Among the Dakotas’ first songs was the Lennon-McCartney classic “Do You Want to Know a Secret?,” which hit No. 1 in England in the spring of 1963. “Bad to Me,” which also hit No, 1 in the United Kingdom in August, became a top 10 hit in the United States in the summer of 1964. On both, Kramer’s vocals shine.

“Billy has one of the most powerful voices in rock and roll I’ve ever heard," said Ken Dashow, host of “Breakast With the Beatles” on Q104.3 FM. "That baritone voice of his sends chills up my spine.”

The Dakotas’ most successful song, “Little Children,” hit the top 10 stateside in June 1964, earning them international fame and a slew of female admirers. “I remember walking down the street in Edinburgh and somebody spotted who I was, and next thing I was getting my clothes ripped off,” Kramer said.

If the attention was a high, the low was Kramer’s increasing dependency on alcohol and drugs, beginning in 1962 when he was 19. “I thought I was taking caffeine pills. I didn’t  feel high, I just felt awake,” he said. “I felt like I was on one of those spinning rides in the fairground, and I couldn’t get off.”

During that period, Epstein provided a nurturing influence. “When I was partying and I put on a lot of weight, he didn’t come out and say you’re getting too fat. He was very compassionate about it,” Kramer said.

The year 1967 was pivotal for Kramer. Disagreements with the Dakotas had escalated, especially over song choices. By March, Kramer decided to leave the group. Five months later, Epstein died — and Kramer was on his own.

Though Kramer signed with EMI Records and recorded Harry Nilsson’s “1941” and Burt Bacharach’s “Trains and Boats and Planes,” he felt lost without Epstein.

He and the Dakotas’ Mick Green tried performing together, but Kramer said it was “a complete disaster.”

Kramer ultimately reinvented himself performing in cabarets throughout the world and by songwriting, most notably, “To Liverpool With Love,” a tribute to Epstein.

More difficult than getting his career on track was overcoming his addictions, which put an enormous strain on his marriage to his first wife, Ann, whom he wed in 1968. By the time they divorced in 1985, Kramer was drinking shots of Jack Daniel’s before showering in the morning.

“I wasn’t an angel,” he said. “I take a lot of responsibility for what went on.”

When he met his future wife, Roni, in 1986, he knew it was time for help. Kramer entered a 12-step program for his drug and alcohol addictions. He has remained sober.

Kramer has also continued to travel the world performing; he has recorded more albums, such as “I Won the Fight” in 2014, which he co-produced with Don Celenza.

“He was very open-minded to different keys, tempos, instrumentation," said Celenza. "When he was in his prime, he was always rushed in and out of the studio. He told me ‘I could never do this with the Dakotas.’ "

In 2016, Kramer penned his autobiography, “Do You Want to Know a Secret?” (Equinox Publishing) in which he delves deeply into his early relationship with the Beatles. When Paul McCartney played Nassau Coliseum last year, Kramer said he visited him backstage, where they harmonized together on “Do You Want to Know a Secret.” He also attended Ringo Starr’s 2014 show at NYCB Theatre at Westbury and the two reminisced afterward.

“They both bent over backwards for Billy when they were in town, which was very sweet,” Dashow said.

Kramer’s still got plenty of plans for his career. He’s working on new music and he dreams of performing with an orchestra and recording an album of standards. For now, he’s looking forward to his birthday gig at My Father’s Place.

“Music is a lot more fun for me now,” he said. “I feel grateful to still be doing this at my age. And I think I’ve come through it pretty unscathed.”