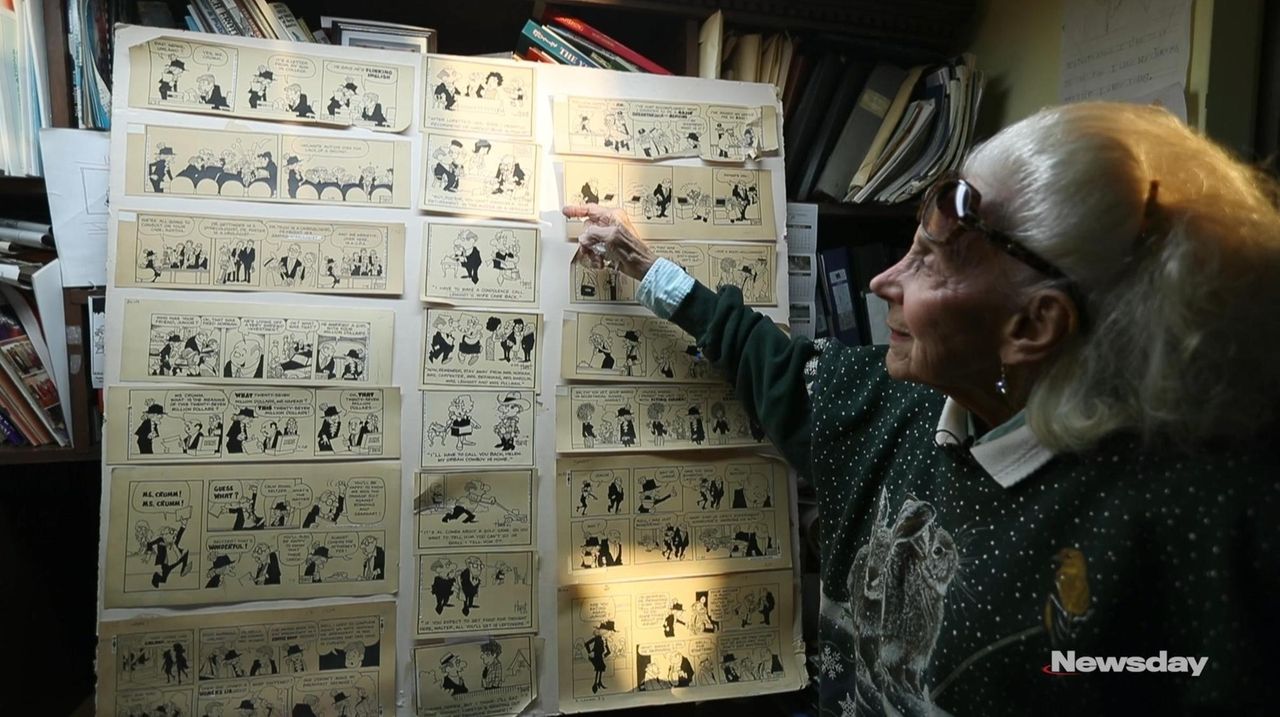 The Lockhorns have been a reality for readers since 1968, when the comic debuted in Newsday as the “The Lockhorns of Levittown.” After creator Bill Hoest died in 1988 at age 62, his wife Bunny Hoest kept the comic strip alive. Hoest, 86, and artist John Reiner produce 11 panels weekly in about 500 newspapers and online. Hoest spoke about her longevity and where she gets some of her ideas on Friday, Jan. 11. Credit: Michael Owens

Every year, fans of Leroy and Loretta Lockhorn, characters in the single-panel comic, watch the cartoon couple celebrate their anniversary on Sept. 13.

If the characters with lines written and edited by Bunny Hoest and artwork by John Reiner are fictional, the date is a tribute to the cartoon’s creator, Bill Hoest.

"We celebrate on the 13th. That was the week of the launch," Hoest said in the Lloyd Neck home and studio where she writes and Reiner draws the cartoon. “We celebrate Leroy’s birthday on Feb 7, Bill’s birthday. And my birthday is Nov. 12, which is Loretta’s birthday.”

Although the Lockhorns are fictional characters, they have been a reality for readers since 1968, when the comic debuted in Newsday on Sept. 9 as the “The Lockhorns of Levittown.”

After Bill Hoest died in 1988 at age 62, Bunny and Reiner kept the Lockhorns alive.

Hoest, who is 86, and Reiner, 62, produce 11 panels weekly, one daily Monday to Saturday and five on Sunday, in about 500 newspapers and online.

After more than 26,000 panels, there is something new in the Lockhorns’ universe: The couple will have a new home — and not in another newspaper.

Hoest has donated the archives of more than 37,000 cartoons — including “The Lockhorns,” “Howard Huge” and others — to Adelphi University, where she obtained a bachelor of arts degree and an honorary doctorate.

“It started here [on Long Island],” David Ranzan, Adelphi University archivist and special collections librarian, said of “The Lockhorns,” which will take their place in the archives alongside “Agatha Crumm,” “What a Guy!, “Howard Huge,” “Laugh Parade” and others. “We’re preserving it.”

Although a lot has changed since 1968, Leroy and Loretta Lockhorn seem largely untouched by time, despite an occasional cellphone. That may be part of the secret to their success. In 2012, Hoest signed a 10-year contract with King Features that included a 10-year option to renew.

“The Lockhorns are incredibly relatable,” said Tea Fougner, who works in Manhattan as editorial director of comics for King Features, which syndicates the cartoon. “We found it’s really popular in social media. People see themselves or their friends.”

Well before Twitter, the Lockhorns provided quick hits, although few lines are lifted from Hoest’s life.

“It’s not autobiographical,” she said of the bickering couple. “We had a great marriage. I was devastated when Bill got cancer and died.”

From LI to the world

“The Lockhorns,” distributed in 17 nations and a multitude of languages, are a global couple. They appear in Spanish as “Los Melaza,” in French as “la Famille Chicane,” as well as in Chinese, German, Finnish, Hebrew and more.

Nevertheless, they exist in a largely Long Island landscape, making their permanent presence in the region more apt.

Canterbury Ales, a restaurant Bill’s son, Billy, used to own, still appears in “The Lockhorns,” along with Long Island locations Bunny Hoest loves, such as Aboff’s, the paint store, and Huntington’s Book Revue and Bistro Cassis, where panels grace the walls.

“When we use names, we get permission,” she said of people. “Dr. [Harold] Blog was our doctor for many years. He passed away. We still use him. He stays alive in the comic.”

Helen and Murray Lenhart, the Lockhorns’ neighbors, and Herb and Harriet Feiwel are real names, if fictional characters, in the comic. The Lenharts lived in Huntington on the same street as the Hoests, though Murray has since died. The Feiwels had spent summers in Huntington and Lloyd Harbor. Don Pullman, a pilot who had lived in Huntington, also lives on in “The Lockhorns.”

People typically “love seeing their name in lights” or in print, Hoest said.

“I think comics are still incredibly valuable to newspapers,” Fougner said of cartoons’ tenacity in print. “You read through stories of terrible things going on in the world. You get this one beautiful page that’s just going to make you laugh.”

“My mother and father named me ‘Madeline’ and said, in their infinite wisdom, ‘Let’s call her Bunny,’” Hoest said. “I never heard the word Madeline.”

A start in Levittown

Bill Hoest, born in Newark, New Jersey, served in the Navy during World War II, studied art at The Cooper Union, and went from greeting cards to cartoons. “The Lockhorns” were born in Levittown, where Hoest lived when the comic debuted in Newsday.

“When it became popular, they had to drop the Levittown,” Bunny Hoest said, explaining the move also in 1968 to make the comic relatable even far from Levittown.

Bill and Bunny met at the Huntington Raquet Club, where they played mixed doubles. They hit it off, put out a book together (she helped edit it) and married.

Bunny Hoest said that “the best part is ‘The Lockhorns’ were built on failure.” She and Bill rode into Manhattan for “look day,” when magazine editors picked and passed on other cartoons they'd created.

“We weren’t making a very good living,” Hoest said. “We decided some of the lines for our regular cartoons were intrinsically funny. Bill, who was a genius, said he could put these lines in the mouths of two regular characters. We changed the lines slightly. It was taken up by the syndicate immediately.”

When Bill was diagnosed with cancer in 1986, they brought in Reiner, who studied at Stony Brook University and drew for Mort Drucker, of Mad Magazine fame.

“I read it when it was first published,” said Reiner, who grew up in Plainview. “I remember Newsday running it as ‘The Lockhorns of Levittown.’”

Hoest works days and Reiner works nights in Lloyd Neck, sitting in the same turret and at the same light box that Bill once used.

“Nobody calls. Nobody bothers you in the middle of the night,” Reiner said. “There’s nothing better.”

A tried and true method

He draws on tracing paper without computers. “When you start to use computers, my feeling is the art programs become similar,” Reiner said. “You don’t want a device doing a lot of the work for you.”

Hoest said she and Reiner also did “Agatha Crumm,” “Bumper Snickers,” “Howard Huge” and others until she “downsized to ‘The Lockhorns’ ” in 1996, when she married Dr. Walter Carpenter. Carpenter died in 2008.

“People enjoy laughing at some of the conflict,” Hoest said of the appeal of the Lockhorns. “It’s gross exaggeration that stretches something to the point of the ridiculous, where you wonder why you’re arguing over something so petty and unimportant.”

Although Hoest tries to avoid puns, word play sometimes is too good to resist. In one panel we hear how Leroy, who drinks, will leave not a carbon footprint, but a “bourbon” one.

“We have an enormous fan response from people who say they use our cartoons in AA meetings. It makes them laugh,” she said. “We get letters from social workers and marriage counselors who say the cartoons are a big aid.”

Hoest is prolific, and she has developed a system that keeps the jokes and laughs coming. In addition to generating ideas on her own, she crowdsources the comic.

“I get a lot of ideas from friends, fans, writers, amateur and professional. They send it in the mail,” she said. “I go through the incoming and pick out — this is Bill’s expression — either a gem or a germ. A ‘gem’ is an idea that’s good the way it is. Or it’s a ‘germ’ of an idea that has something to it.”

Hoest mails panels rather than emailing them to King Features, believing copies lose charm. “John and I feel you get a better reproduction with the original,” Hoest said.

She has a backlog of about 5,000 laugh lines, keeping gags going from generation to generation.

“I grew up reading their cartoon,” Helene Buchin, a neighbor, said. “I remember my dad getting the paper. I would read the cartoon.”

The Lockhorns may exist in a single panel, but the daily comic creates a whole world.

“Sometimes it’s simple. The two of them sitting in a chair. Sometimes he’s in his office, at home, in a restaurant, out at a party,” Reiner said. “Like life, it’s anywhere.”

“The Lockhorns: Together At Last,” a musical based on the comic with a book by Martha Bolton and music and lyrics by Hoest, debuted in Nashville two years ago. The comic has also been featured in exhibits, most recently in 2017 at the Heckscher Museum of Art in Huntington.

Fans sometimes thank Hoest for years of laughter. But she remains relatively anonymous for someone whose work is so widely seen.

“This is the wonderful part of my profession,” she said. “They know my characters, but I have privacy and anonymity.”

Adelphi is digitizing and preserving work in acid-free folders and boxes in a climate-controlled room, keeping the cartoon literally fresh for researchers; the university is also planning a future exhibit.

“That’s where it’s going to be for the rest of its life,” Hoest said. “I want to keep it on Long Island. That’s where it belongs.”

5:28
Where to get Asian street food on LI
5:28
Exploring Indian street food in Hicksville
Bring your dog to these pet-friendly fall events
LI drive-in, outdoor movie and concert schedule for summer
How to make the best meatballs at home
LI couple opens hand-rolled ice cream shop
Didn’t find what you were looking for?