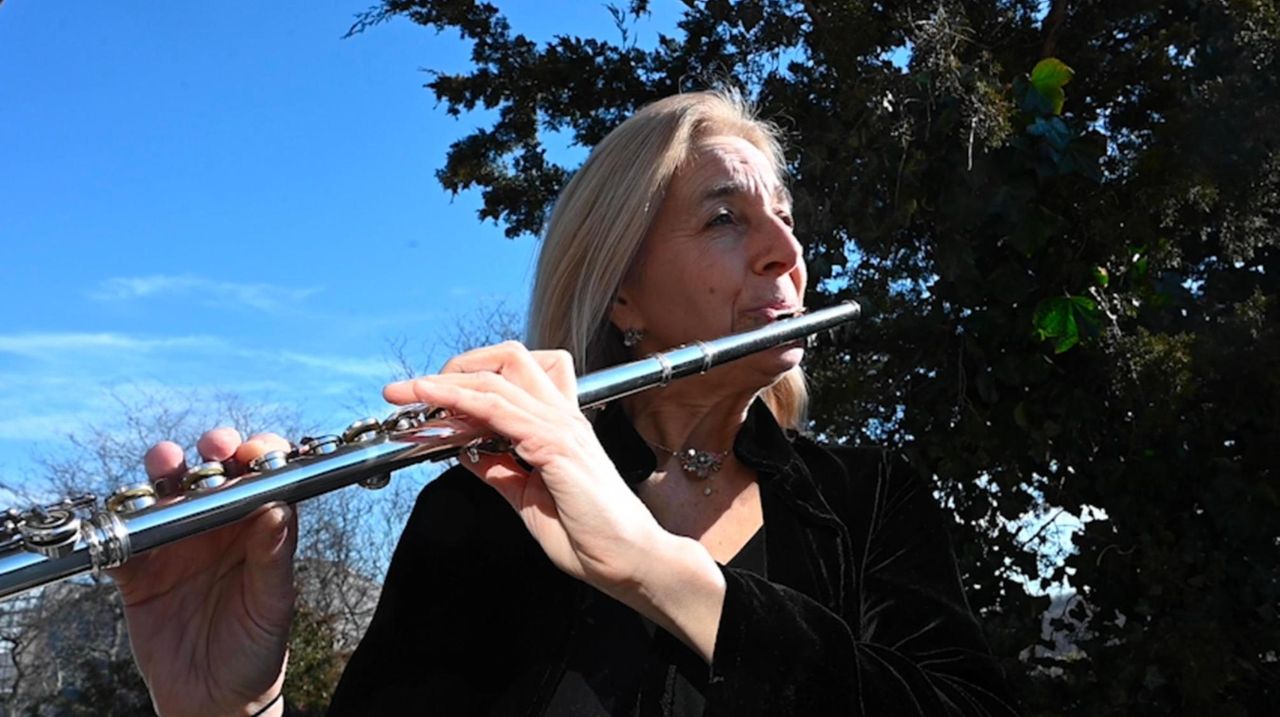 On March 9, flutist Carol Wincenc, who lives in Manhattan, talked about her lifelong relationship with the instrument. Credit: Newsday / Alejandra Villa Loarca

When you are young and talented and focused, dreams can take you a long way. All the way to the top, along unknown paths, perhaps even forging the way for others. Flutist Carol Wincenc, whose flourishing international solo career started 50 years ago, has done all that and more. And done it without shucking off her nice-girl-from-Buffalo self.

Wincenc grew up with a violinist-conductor father, Joseph Wincenc. “He had charisma,” she says in admiration. “He always said 'you must kiss your audience.' ” And a pianist mother, Margaret Wincenc, who was “more contemplative. I am a mix.” Music saturated the household, and she took full advantage. “My father conducted three different orchestras, and all those musicians meant selling the most Girl Scout cookies. Every year!”

It also meant there was no question that she would be a performer. “I started on violin and studied ballet.” But once she had a flute in her hands, at age 9, she never let go. After graduating from high school, it was off to Italy to study with Severino Gazzelloni, a leading flute teacher in the mid-20th century. While a teenager abroad, the goal of becoming a solo artist grew clear. Pianists did it. Violinists did it. Why not a flutist?

As everyone expected, she returned home and enrolled at Oberlin Conservatory of Music in Ohio, a leading musical institution, to finish her education. “I come from an Oberlin family,” she explains.

But it was the late '60s. “I wanted to go to New York. Of course, everybody wanted to go to New York, right?” So she transferred, graduating from Manhattan School of Music and getting a master's degree from The Juilliard School. She spent summers soaking up more music — and life — playing in an orchestra at the Aspen Music Festival and School in Colorado and at the Marlboro Music Festival in Vermont where French flute legend Marcel Moyse was so smitten that he handwrote, in his imperfect but expressive English, an adulatory letter on spiral-bound notebook paper: “Finally I meet the flute player I dream of all my career.” He extols her “beautiful sonority,” “brilliant technique” and “intelligence.”   She keeps that letter tucked behind a photograph of an elderly Moyse, dressed in baggy plaid trousers, that hangs over the piano in her Manhattan living room.

Carol Wincenc has collected photographs, letters, programs and other souvenirs from her half-century of performing throughout the world. Mostly, though, she has collected — and holds dear — personal experiences and indelible memories.

Preparation for the final of three golden-anniversary recitals at the Staller Center that was to have been April 16 on the Stony Brook University campus (the first two were in Manhattan) has been interrupted by the COVID-19 crisis.

Awaiting a rescheduled date, she recalls early times on Long Island: “Playing at Old Westbury Gardens was one of my most joyous experiences.” She smiles, remembering a long-gone boyfriend from Roslyn Heights who helped her explore the Island. “It was pretty fascinating to me.” Sadly, several favorite collaborators — the Long Island Philharmonic, the Music Festival of the Hamptons when Lucas Foss, her old friend from Buffalo was artistic director, and the Sea Cliff Chamber Players — are no longer in the business of making music. “But people still come up to me and say 'we remember you from Sea Cliff'.” Another big smile.

By the late 1970s, before she was 30 years old, audiences, critics and, pivotally, influential figures in the music world had discovered her and her flute. Concert Artists Guild, which has launched a number of young talented musicians into stellar careers, presented her at Carnegie Recital Hall in 1972. She won first prize at the Walter W. Naumburg Solo Flute Competition in 1978, the only time that prestigious annual event has been held for flutists. “I was not a competition kind of person,” Wincenc remembers. “But, thank God, the Naumburg saw me as a complete musician.”

Keeping her musical self well-rounded, she landed the principal flute chair in the St. Paul Chamber Orchestra in 1972, leading to a fast friendship with the great virtuoso Jean-Pierre Rampal, who popularized the flute as a solo instrument as he played in standing-room concert halls throughout the world. Indeed to many ardent young female flutists, especially, Rampal was a rock star.

Carol Wincenc had crossed paths with him during her time in Italy, but she swoons recalling a wintry Minnesota day. “I was asked to pick him up at the airport. He arrived in a mink coat, so effusive, speaking French. It was so cold I could see his breath.” They played the Domenico Cimarosa “Concerto for Two Flutes and Orchestra,” a flutists' favorite, and “he totally became a mentor for life. While I got spontaneity and vivacity from Gazzelloni, Rampal [taught me] finesse and nuance. He was so generous. He was about community. And the music.”

Wincenc herself has had a direct influence on growing that community. In several ways.   As her own musical sphere expanded, she shared.

“I love all world music, and for several years I put together an International Flute Festival at the Ordway Theater in St. Paul [Minnesota]. We had Japanese shakuhachi, Indian flutes, Andean, Chinese, Native American … top players.” She points to indigenous instruments in her living room. “And Rampal participated. We even toured it.”

Meanwhile flute fairs and clubs popped up all over the United States, including one on Long Island founded in 1984 for which she gave recitals and master classes. “The National Flute Association is having its 50th anniversary next year. It's become the largest single-instrument organization in the world. Bigger than piano,” she says, making a quick call to an NFA officer to verify.

But one thing all flutists have lacked — and for which they envy pianists, violinists, cellists — is repertory. Beethoven did not compose a flute concerto. Nor did Brahms. Or Tchaikovsky. Thankfully, there are wonderful works by Bach, Handel and Vivaldi that flutists learn and perform. And love. (“Johann Sebastian Bach is my composer for a desert island,” says Wincenc.) But otherwise the pickings have been slim.

Nevertheless, things started to change in the mid-20th century, with young well-trained composers eager to explore sound, nontraditional forms and color palettes of a variety of instruments. And artists commissioned new works. Carol Wincenc is responsible for the creation of more than 50 works — from solo pieces to concertos by such major contemporary composers as Christopher Rouse, Henryk Górecki, Joan Tower and Jake Heggie.

In her busiest years, Wincenc racked up an enviable stash of frequent-flyer miles, appearing in up to 80 concerts worldwide with orchestras in Seattle, Chicago, Atlanta, London, Amsterdam, Frankfort and elsewhere; she has collaborated with the likes of the Guarneri, Emerson and Tokyo string quartets; sopranos Jessye Norman and Elly Ameling; pianist Emanuel Ax; and cellist Yo-Yo Ma.

Teaching, though, has kept her grounded, and she has sent many students on to positions in major orchestras or to their own teaching studios. The Juilliard School, where she accepts students from pre-college through graduate levels and coaches eight chamber-music groups, hired her in 1988.

Ten years later she added Stony Brook to a growing resume, becoming a studio faculty artist. On campus according to her recital schedule (but sometimes four days a week), she teaches master's and doctoral students and coaches chamber music, a particular love of hers. With the COVID-19 isolation, she’s doing all of this virtually, using FaceTime.

Major universities, Indiana and Rice among them, tried luring her with full-professorship offers. But she chose to stay in New York, where she was raising her son, Nicola — of course, sending him to pre-college at Juilliard — who has worked as a fashion model and is the guitarist/vocalist in the rock band Caverns.

That's been an education for his mother, who proudly punches up a video of him and his guitar on her cellphone. “Do you like rock? It has lights, coordinated electronically. It's so fun, it's tonal, there's melody in there. They've got something to say,” she says of millennials, her son’s generation. “People leave a rock concert happy and upbeat.”

The favorite thing of her career, Carol Wincenc says, looking lost at the suggestion that she might have ever considered anything but music, is “that music can touch me to the core. Music has taught me how to connect with people, humility, sensitivity, how to have fun, how not to be so dark and brooding. And because the flute is a single line instrument [unlike a piano, violin, guitar or other instrument on which a musician can strike a chord or play more than one note simultaneously], it gives me a yearning to be with others.”

In these weeks of social distancing, when many have found themselves with downtime, Wincenc racks up daily solitary 5-mile power walks, admitting she, like most, finds peace of mind hard to come by. She says she yearns to “stand on Broadway and play for people, to keep their spirits up.” She is grateful that free nightly Metropolitan Opera streaming can help distract her — and all of us.

Decades ago New York Magazine declared her "Queen of the Flute." She has worn that crown deftly. The flute is still in her hands at least an hour and a half a day, maybe six if she's learning a new piece or has a recital.

Did it ever matter, did she have to work harder, being a woman in the music world? “I don't label myself a feminist,” Wincenc says, recalling that very early in her career she inquired about an opening at the Berlin Philharmonic. “They sent a letter that 'we don't accept women in the orchestra.'” And that was that. The job went to James Galway, who later enjoyed enormous fame and popularity as a solo artist.

The Martha Graham Dance Company, at its 2020 gala (postponed indefinitely from its April date), will honor Carol Wincenc as one of six trailblazing women.

“Our board, in a number of meetings, considered a lot of women whose successes reach women even beyond their fields. Carol found success as a solo performer who is creative and adventurous,” says LaRue Allen, executive director of the dance company, who notes that the honorees come from many walks of life, not just the arts.

“'Trailblazing'! I'll take it,” Wincenc exclaims. “Well, I like to hike. And I can't wait to meet these other women.” Then in a reflective tone, about making her own way and then leading others, “Really, it's an even playing field. It's the music that tells you what to do.”

While waiting for events to resume, Long Islanders can find flutist Carol Wincenc and more online.

Rock fans can connect to the work of Nicola Wincenc: instagram.com/wincenc/?hl=en

Explore the Fire Island Lighthouse, more things to do this weekend
See vintage warplanes at Airpower Museum, air show
2:45
Italian steakhouse launches 'Game Night' exotic meat dinner series
2:45
Would you eat wild boar? This LI restaurant is betting you will
1:03
A cherry blossom festival blooms in Greenport
1:03
Cherry Blossom Festival opens in Greenport
Didn’t find what you were looking for?