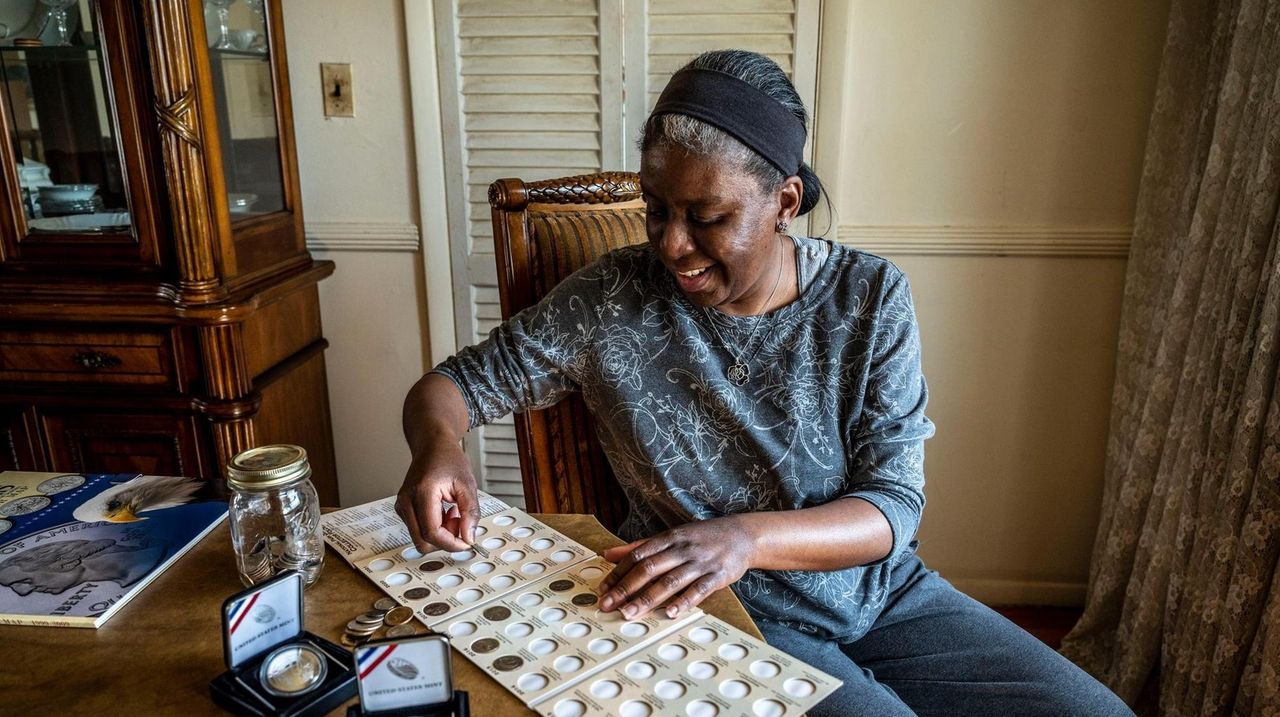 For National Coin Week, April 18-24, Newsday spoke to Jennifer Scott, whose father got her interested in the hobby. She began by collecting "state quarters." Credit: Newsday / Alejandra Loarca Villa

Back in 1999, Jennifer Scott, now 49, heard on the news that the U.S. Mint was issuing quarters to honor each of the 50 states. She began collecting the quarters, each featuring a design specific to that state.

"I became excited if I got change and saw a shiny quarter," she said of a search for all 50 states, with the last issued in 2008. "I saved every one I received and put them in a Mason jar for safekeeping."

Scott, an engineer, assembled a set of all 50 state quarters, enjoying their history and design. She also began collecting other coins in circulation as well as commemorative coins honoring suffragists, the Rev. Martin Luther King Jr. and the Tuskegee Airmen.

"This is an ongoing project for me, so I can share the experience of collecting coins that tell a story," said Scott, who lives in Nassau County. "The state quarters got me started in coin collecting."

While many spend or save money, others enjoy collecting coins, or numismatics, seeing history preserved in metal in an era measured in milliseconds.

"I enjoy having in my hand an item created in 1799 or something from 1862 that might have been in the pocket of a Civil War soldier," said Anthony Langan, 71, president of the Massapequa Coin Club, which has about 40 members.

Although it may not be on your calendar, April 18-24 is National Coin Week, a moment to highlight the hobby of numismatics — the study of coins, money and sometimes medals — and how it’s changed over the years. This year marks the 100th anniversary of the last Morgan silver dollars, the first Peace dollars minted and the 50th anniversary of the Eisenhower dollar.

"You have something tangible that is related to a different time," Dr. David Menchell, 67, American Numismatic Association delegate for the New York metropolitan area, said of the hobby’s appeal. Menchell, an allergist who lives in Fresh Meadows, Queens, is also a member of the Gold Coast Coin Club of Long Island. "It’s fascinating," he said.

Menchell has coins dating to the Colonial period in the United States, and one with a portrait of Alexander the Great from around 320 BC.

Despite digital currency, from ApplePay to GooglePay and to crypto, collectors say the hobby endures.

"Our move toward digital currency hasn’t affected collecting," said Andy Dickes, National Coin Week coordinator at the American Numismatic Association, in Colorado Springs, Colorado. "The hobby has remained robust even as we move to a more digital society."

The ANA, which has 400 local groups, has seen membership grow during the pandemic from under 28,000 a year ago to nearly 30,000, as its programs have gone virtual.

"People were stuck inside. It made them clean closets, organize drawers and pick up old hobbies that they could do inside," said Buddy Alleva, 61, owner of Long Island Rare Coins and Currency in Massapequa.

Joseph Parrella, president of Eastern Numismatics, a Garden City store in business since 1974, talks of an interest in the "tangible vs. digital."

"Our business is very, very busy," he said, noting, however, that much of that business is online.

Langan said his group’s average age is around 60, with older people often more enamored of coins. "Younger people aren’t as interested in the hobby. They have video games," he said. "They don’t have money to spend on coins."

Parrella agreed that "there’s a greater interest among people over 40," but gave different reasons. "Coins are tangible items like artwork," he added. "A 20-year-old may not buy a work of art, but a 40-year-old will."

Parrella noted that coins have a 2,700-year history, dating to about 700 BC, when they were used by Greeks and Lydians, the latter in modern-day Turkey. He said the "first coins were small little blobs made out of electrum, an alloy of gold and silver," helping create commerce, civilization and culture.

"Coins became a way someone could free themselves from the land," Parrella said. "You could exchange the work you did on a farm for money."

In the United States, Congress passed the Coinage Act on April 2, 1792, creating the first national mint in Philadelphia. The U.S. Mint today operates production facilities in Philadelphia, San Francisco, Denver, and West Point, in upstate New York, along with a bullion depository in Fort Knox, Kentucky.

While many collectors love coins that have stood the test of time, new things are going on in coin collecting. The Mint creates coins specifically for collectors and to inspire a love of collecting currency. The coins commemorate people and places, with part of the purchase price sometimes going to support various causes.

For example, Christa McAuliffe 2021 proof silver dollars, honoring the teacher who died in the 1986 Space Shuttle Challenger disaster, began shipping on March 17 for $79, with $10 from each sale going to support FIRST, the robotics program for children.

"The Mint has become a marketing machine for all kinds of coins," Langan said. Collectors coins that came out earlier this year include the Feb. 19 release of three quarters with reverse designs honoring the Tuskegee Airmen National Historical Site in Alabama, and 2021 American Eagle Gold proof coins on March 11.

"They highly polish them so the surface of the coins have a mirrorlike quality," Menchell said of commemorative coins.

Likewise, Langan remembers his grandfather giving him and his twin brother each a silver dollar when they were around 6 years old. "We cherished it. It was special," he said. "Here’s this coin minted in the 1890s. It sparked our interest in other coins."

Menchell said he started collecting in first or second grade when a friend’s father pulled out some Liberty half dollars struck in the 1800s. "I said, ‘My God, what is this?’" he said.

Then, he explained, he began saving money to buy coins from a hobby shop down the block and going through his father’s small change.

"My grandmother had a cigar box with some loose coins in it. I looked through it," he said. "She had an Indian Head penny dated 1877, the rarest date for that series."

Langan gave up the hobby as he reached adulthood, then resumed in later years, when he had more money and time.

"Once I started a family, I put my collection away," he said, noting he joined the Massapequa Coin Club 12 years ago, after attending on and off for about 20 years,, becoming president two years ago.

Hobby for all budgets

While coin collecting may summon images of expensive coins, hobbyists can pursue their passion based on their budget. "I look for what I can afford," Scott said, noting she buys coins from the Mint and dealers and shops at Hobby Lobby for books to showcase them.

While some collect with commerce in mind, others like Scott, who was pleased to find a 1976 bicentennial quarter honoring 1776 in her change, collect for pleasure more than profit.

"You can still go through coins. Go to the bank and get a roll of quarters," Menchell said, noting an interesting or valuable coin may be hidden among a roll of common coins. "You can still pull out [rare] nickels and pennies."

Franklin half dollars and Mercury dimes, which Langan said are more valuable than their face value, crop up in a wilderness of change. While nothing is more ordinary than a penny, a series of Lincoln cents show scenes with Lincoln, commemorating the 100th anniversary of the first Lincoln cent in 1909 and the 200th anniversary of his birth.

An interest in silver and gold has driven an interest in old and new commemorative coins made from precious metals, collectors said.

The U.S. Mint, for instance, makes silver American Eagle dollars that some (like Scott) buy for silver content.

"They hope silver will go up in value and they’ll make money," Langan said, noting silver recently was $26.22 an ounce. Menchell said some collectors specifically are attracted to new silver and gold coins.

"If it’s precious metals — silver and gold — those coins are issued at a premium," Menchell said. "The amount of gold and silver of the coins exceeds the face value. You won’t use a silver quarter in commerce, knowingly."

While holding history in their hands attracts many to coin collecting, experts say it's important to study what you’re interested in.

"There are lots of counterfeit coins," Langan said. Among them, he noted the 1916 "standing Liberty" quarter. "It’s rare," he said, "so people counterfeit it. Buy from reputable sources," Langan advised. Don’t just know the coin; know as much as possible about the seller.

Among the best books, according to Langan and other collectors, is "The Official Red Book — A Guide Book of United States Coins."

A coin’s condition, too, is key to its value. Grading services evaluate and certify coins, rating circulated coins up to 59, and uncirculated and proof up to 60 to 70 (on a scale of 70). "The higher the grade, the more the coin is worth," Langan said, "regardless of how rare it is."

Parrella said a proof coin is struck multiple times "to give it a high finish for collectors," making it more expensive and valuable.

While digital dominates commerce, it’s hard to know whether coins will become a thing of the past.

"I don’t think in my lifetime they will stop making them," Parrella said. "The U.S. and other mints generate an income. And people are interested in them."

Realizing young people are the future of any hobby, groups like the Massapequa Coin Club have handed out older coins (such as Indian Head cents and nickels, Mercury dimes and Franklin half dollars) to young people at shows, hoping to inspire their passion.

"We want to get the spark going early," Dickes said of the American Numismatic Association. "We have programs for kids that get them coin collecting."

Meanwhile, Scott plans to organize her father’s coins to eventually give to his grandchildren, passing down coins and, possibly, an interest and appreciation.

"I’m going to put them in a nice binder," she said. "You don’t want to hand somebody a handful of coins."

If you’re interested in collecting coins, you can begin by searching online for local coin clubs and national organizations, such as the American Numismatic Association (money.org), which has free (now online) programs.

“Obtain a copy of the ‘Red Book — A Guidebook of United States Coins,’ published by Whitman Publishing,” Anthony Langan said. “Most libraries have a copy of this book.”

Start small, he added. “Examine coins in your change and learn about each denomination — such as history, mintage and metal content,” Langan said. “Never clean a coin. Cleaning a coin greatly reduces its value.”

Once you have a basic knowledge of coins, he said it may be time to visit a coin store or coin show, COVID-19 restrictions permitting. “Ask questions and speak to the dealers,” Langan said. “Find someone who is helpful.”

Beware of counterfeits or coins that are cleaned or altered, he added. Buying from a trustworthy source is a key to collecting.

Also key to collecting: seeing your coins clearly. “I need glasses. A lot of times I need something better than reading glasses,” Langan said. “I have a loupe, a magnifier for coins.”