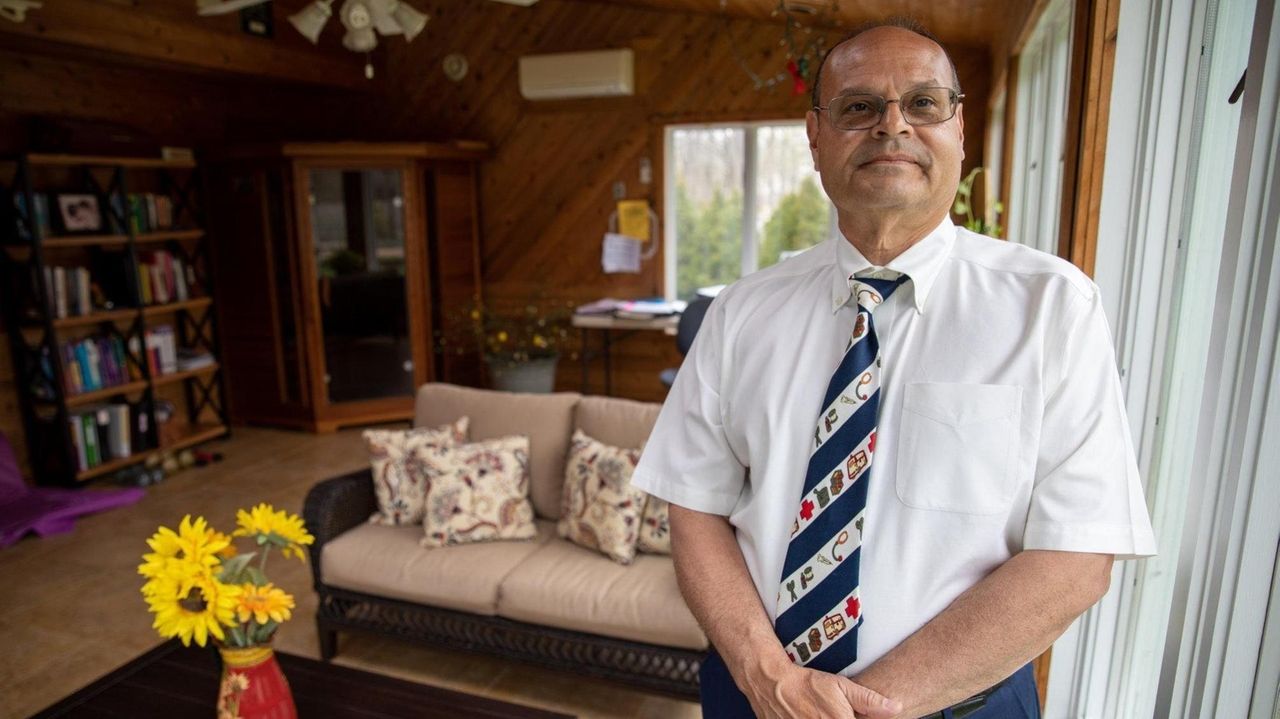 Dr. Edgar Borrero is a retired surgeon who has been volunteering at COVID-19 vaccination sites as part of the Medical Reserve Corps. Credit: Morgan Campbell

When Long Island officials began planning late last year for mass COVID-19 vaccinations, they turned for help to the Medical Reserve Corps, a little-known organization of volunteers who include current health professionals as well as retired doctors, nurses, pharmacists and other practitioners.

The Corps was launched by the U.S. government after 9/11 to bolster disaster preparedness. Its medical and nonmedical personnel participated in local relief after Superstorm Sandy. Today, officials agree that the MRC's contribution has been significant to getting the public vaccinated.

"A lot of people that have retired from clinical work or are semiretired and have kept their licenses active have really come out of the woodwork to help out at our [vaccination] pods," said Dr. Jason Winslow, medical director of the Suffolk County Emergency Medical Services Division.

Winslow said at least 200 of more than 1,000 MRC volunteers have steadily worked at least four hours a week alongside county employees and others at Suffolk County Health Department vaccination sites since in January. Nassau County Health Commissioner Dr. Lawrence Eisenstein said his MRC unit has more than 1,420 volunteers, with about 225 working regularly at his agency's sites.

Some MRC volunteers have worked in both counties. One is Regina Femminella, 66, of Islip, a semiretired nurse for the Bethpage school district. She first encountered MRC volunteers on Jan. 8, when she went to Nassau Community College in Garden City for her Moderna vaccination.

"I was very much inspired by their professionalism and their kind attitude and decided to join," she said.

After a background check and MRC training, she began to administer injections at Suffolk County Community College in Brentwood and Riverhead, and at Nassau Community College. "I like to average twice a week, but there are people here who do a lot more than that," she said. "I’m very humbled by their service."

She said members of the public are often relieved to be vaccinated, and some tell of loved ones who have died from or are hospitalized with the virus.

"It’s the tears that say it all," Femminella said. "You know, I let them speak and just try to offer my compassion and my best wishes, my best prayers … It’s what nurses do and what we’ve been doing since the beginning of time."

Dr. Edgar Borrero, 66, a retired surgeon from Bayport, first volunteered to vaccinate and train health care workers in Riverhead in January. Later, he worked in the spacious gymnasium at Suffolk County Community College in Brentwood as an MRC "medical consult" to screen people who reported such conditions as allergies or chronic ailments.

"As long as they had no allergic reaction to a prior viral vaccination, especially a prior COVID vaccine, we cleared them to receive the vaccination," he said.

Borrero's career includes hospital surgical and teaching posts, deployment with a Mobile Army Surgical Hospital in Iraq and Saudi Arabia during Operation Desert Shield and then Operation Desert Storm in 1990-91, and medical work with Suffolk County EMS, and with the Bayport fire service since 1999. He said his affinity for volunteerism began when he took civil defense courses at age 15 in Bayside, Queens.

Borrero said that COVID-19 wasn't necessarily a surprise because in medical school, he was taught that a viral pandemic seems to occur once nearly every 100 years. He praised the MRC's role today.

"It’s very important, this Medical Reserve Corps, backing up the doctors that are active …," Borrero said. "We’re in a state of emergency, so it’s fortuitous that we have it."

According to the U.S. Department of Health and Human Services, more than 300 MRC units are helping with COVID-19 vaccinations in 43 states, Puerto Rico and some territories. In New York, volunteers can apply online. (Search "Roll Up Your Sleeves and ServNY.")

Eisenstein said MRC applications jumped in January, and he was not surprised by the interest from current and retired professionals.

"For people in medicine, most of the people that went into medicine, whatever role they’re playing, there’s a certain innate satisfaction that you’re helping other people, and just because you’re retired doesn’t mean that interest and your skills are gone," he said.

Dr. Bruce Jaslow, 83, a retired dentist from Old Brookville, has participated in MRC activities for about 15 years. Now he puts on a brightly colored vest two or three times a week to direct lines of recipients to 18 vaccine stations at Nassau Community College. He uses hand signals to communicate with other hallway volunteers and reminds people to wear masks and stay six feet apart.

"I missed my calling," Jaslow joked. "I could have been a great parking lot attendant."

He recalled one woman around age 30 who was near tears as she clung to her husband while in line for the vaccine. He thought she feared the needle.

"I was about to calm her down and say, 'It’s nothing,' and how I had mine and I didn’t feel a thing," Jaslow said. "And no, she was crying out of gratefulness that she could get vaccinated."

Jaslow said the work has been fun and meaningful. "You hear things on the media, that, oh, we got 1 million people vaccinated, we got 2 million," he said, "and I’m thinking, yeah, some of them came from us!"

Officials cited the contributions of other retirees, apart from MRC.

'Somebody's got to do it'

Retired toolmaker Joe Braunreuther, 69, of Nesconset, has worked on coronavirus efforts with Suffolk’s Community Emergency Response Team, another preparedness organization. He joined the team after 9/11 and coordinates its volunteers for the towns of Islip and Smithtown. Justin Gallo, Suffolk CERT president for the past two years, said about 40 members have participated in antivirus efforts.

"I started with the COVID last April," Braunreuther said. "We were making phone calls to hospitals and doctors' offices supplying them with PPE. I’d work six to 12 hours a week, calling up different doctors’ offices telling them where and when to come and pick up their supplies."

This year, he has directed foot traffic at various vaccine sites. "Somebody’s got to do it," he said in a matter-of-fact way. "I’m a Christian, and it’s what I do. It has to be done, and if I have the time, I do it."

Kwok-Lung (Joseph) Cheung, 71, a retired manufacturing and processing engineer who lives in East Northport, is another CERT volunteer helping with flow control two to four times a week at Suffolk sites. Cheung, who has been a CERT volunteer since 2010, welcomed the chance to contribute to the vaccine effort.

"You face a lot of people and talk to them, help them, and sometimes they tell you their stories," he said. "It’s very interesting."

The need for volunteers came at an opportune time for Elisa Mancuso, 67, of Islip Terrace. In September 2019, she left employment after 36 years as a neonatal nurse practitioner and professor of nursing at Suffolk County Community College in Brentwood.

Mancuso has been an MRC volunteer since 2009. In December, she drove to firehouses across the county to administer rapid COVID-19 tests to first responders. In January, she began filling syringes and giving injections at Suffolk vaccination sites. She said she works three or four 10- to 12-hour shifts each week.

"I’m pretty tired at the end of the day, I’ll be honest with you," she said, "but to know that we have vaccinated so many people and hopefully have made a dent in the infection rate and the severity of the illness, it just is very heartwarming. And all of the people that have come to our vaccination clinics, they are always so, so appreciative."

Earlier this year, Deb Cabrera felt frustrated. She could not find a vaccine appointment for a relative. Then she found a Facebook group called Long Island COVID-19 Vaccination Information.

She read hints there that helped her secure an appointment at Stony Brook University. And then she found one for her husband and another for her son, who works in physical therapy.

As the pandemic descended in 2020, Cabrera, 59, discontinued her work as a nail technician. "Basically, I retired and started taking care of my granddaughter," she said.

But this year, with her newfound abilities at the computer, she has joined other Long Islanders who are helping strangers find vaccine appointments. She said she spends hours at a laptop on her kitchen table in Ronkonkoma working with New York State's vaccine website.

“I find some appointments," she said. "Then I go into the Facebook group, post that I have an appointment — where, the date and the time — and tell people to private-message me if they want it.”

She estimated in mid-April that she had helped more than 200 people.

The work has been gratifying. Cabrera said one woman sent her a photo of a son holding his vaccination card.

"Most people thank me; they’re all very, very thankful," she said, "but that woman happened to show me the picture and thank me profusely, and I was like, ‘You just made my day.’ "