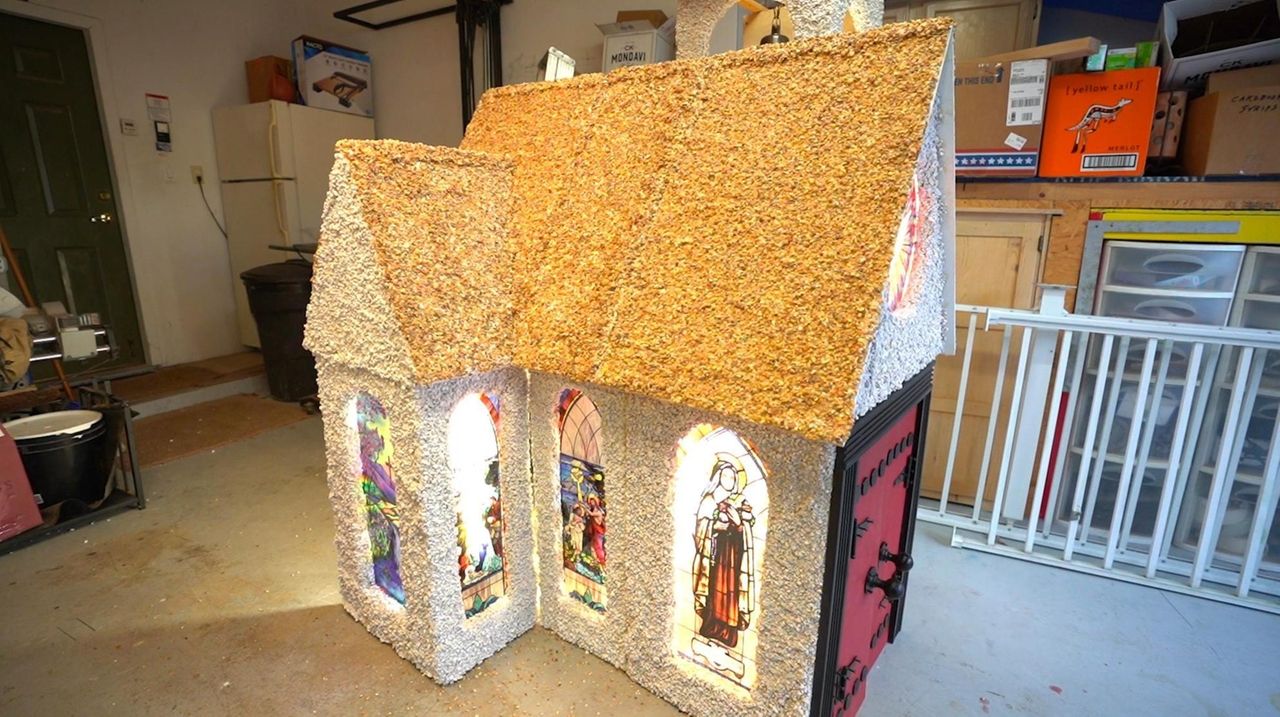 Joe Jareck of Ridge created a Christmas church from the wood he had been planning to use to build a ramp for fellow veteran and neighbor who died before Jareck could complete the project.  Credit: Randee Daddona

Every year as Christmas approaches, Joe Jareck applies his passion for woodworking by building holiday displays with which to adorn the lawn of his home in Ridge.

Three years ago there was a shoulder-high nutcracker soldier whose wooden jaws would open and close when actuated by a lever in its back. The year before that, he crafted a drunken snowman who wielded a wineglass and a bottle of Chianti to brace himself against the seasonal cold. Another favorite was a skinny Nordic Santa Claus, whose sack of toys included the figure of a beloved Chihuahua, that now spends Christmas seasons at the Mount Sinai home of one of his daughters.

Over the past several months, in a heated garage workshop redolent of hot glue and newly sawed pine, Jareck built a miniature church that has become the centerpiece of this year’s Christmas decorations on the lawn of his home in the Leisure Glen retirement development.

“The idea of building a church came from my many, many visits to Europe — to France and Germany and Barcelona and Amsterdam,” Jareck, a retired electronics distributor who once lived in Germany, said of this year’s Christmas handicraft.

The chapel building, a cruciform structure with faux stained-glass windows and a brass bell ensconced in an 8-foot belfry, took almost eight months to build.

It features interior lights that illuminate the religious-themed windows and stone-encrusted walls. The shingles on one panel of the belfry roof are formed from hundreds of shiny overlapping pennies, which Jareck positioned individually by hand and which shimmer in a spotlight that is trained from above. The brass bell, which he had made by a shop in Georgia, is inscribed with what he acknowledged is a bit of an inside joke: “St. Joseph’s of Ridge, New York 2019.”

“The countryside of Europe has so many characteristic stone churches,” he mused, as he hovered over a vise while forming a final piece of copper sheeting that would cover the belfry’s pitched roof. “I remember going into cathedrals and seeing the stained glass and the vaults and the bell towers. It was just so inspiring.”

Lighting up the neighborhood

Neighbors say they find his work uplifting, too.

Carl Schifano has seen Jareck’s creations take shape in the few years he has lived next door.

“He’s a real craftsman — the carolers, the snowman — they are very real and lifelike,” Schifano, 72, said of Jareck’s earlier Christmas figurines.

This year, Schifano helped Jareck affix the faux stained-glass laminations onto the plexiglass windows — worrying along with Jareck that no crease spoil the illusion.

“It was a bit nerve-racking because you can’t really make a mistake,” Schifano said of the laminations. “If the film should bend or crease, it’s impossible to get out.”

“But his craftsmanship to make this cathedral, it’s probably the best piece I’ve seen of his,” he said.

Jareck’s woodcraft is a familiar addition to the Leisure Glen retirement community where he lives. He has also built sets for theater productions staged in the neighborhood’s community center

“Joe’s church is a beautiful spiritual gift for the Leisure Glen Community,” said Mary Ann Fox, a friend and neighbor who had followed Jareck’s progress on the church from the early, initial stages of the construction.

“I was lucky enough to see the church early on, before the bell tower was in place and before the stained glass was installed and the roof was finished,” she said. “It’s nonsectarian but hopefully will remind everyone to be kinder, especially at this busy time of year. With all that’s going on in our world, we could all use a little spirituality in our daily lives.”

Jareck’s facility with woodcraft was so well known around the neighborhood that when a fellow veteran who lived nearby needed a ramp built at his home to help him come and go in his wheelchair Jareck bought a stack of lumber and fired up his power tools.

Jareck was almost finished with the ramp, however, when the man died.

One of his daughters suggested that, rather than toss the lumber into landfill, Jareck draw from a love of religious architecture he developed during a career of European business trips.

So Jareck crafted the church from the re-sawn timbers of the ramp that was to have conveyed his veteran friend.

Elaborate Christmas decorations are a thing here on Long Island.

“It’s a growing trend, with people seeing what their neighbors are doing and wanting to keep up with the Joneses,” said Regan, who added the holiday display division to his landscaping business eight years ago.

Regan said some homeowners have spent as much as $20,000 to erect decorations that can include thousands of lights strung along rooflines, free-standing displays of sleighs, reindeer, starbursts and Nativity scenes, and tall evergreens wrapped in tinsel and garlands.

He said a recent two-day job in Hewlett that was completed at dusk drew a crowd of neighbors who burst into applause when the light switch was finally thrown.

“It became a neighborhood thing, with everyone oohing and aahing,” he said. “There is something about Christmas displays that creates a party atmosphere.”

Jareck says a lifetime of experiences come together in his woodcraft.

Born in Greenwich Village to a father who had worked in public relations before becoming a longshoreman, Jareck was a student at Andrew Jackson High School in Queens when a woodworking competition he entered captured his imagination.

But the Vietnam War intervened before passion became vocation. He was forced to drop out of City College in 1964, when his father became ill, and almost immediately was drafted into the Army as part of President Lyndon Johnson’s war escalation.

He served with the 11th Army Cavalry, which fielded tanks, howitzers and flamethrowers in counterinsurgency fighting east of Saigon. He said his attachment to the cavalry’s headquarters unit spared him of the worst of the fighting, though there were deaths he would just as soon forget. And the war cost him a bit of his hearing.

He said woodworking has always brought him a sense of serenity, shutting down the tension of his day job while he was still working, and keeping Vietnam’s unpleasant memories at bay now that he has time on his hands.

He mostly works alone, eschewing even music in favor of the sounds that power tools make — the zing of a table saw, the growl of a router, the burring of a power sander.

The nutcracker soldier he built required more than 2,500 individual miter cuts to create its rounded form. Each pass took his hands within inches of the spinning blade.

“I will not do that again, because I’m lucky I still have all 10 fingers,” he said with a laugh. “Believe me, that blade sucks in the wood in a heartbeat, so I had to be careful with every cut.”

He usually gives his projects away to adorn the Christmas lawns of relatives across Long Island. One is with a son in Port Jefferson Station. Another is with a niece in Massapequa. Still another is with a former fiancee who lives in California.

But the church likely will be back on his lawn again when Christmas rolls around next year, he said. “It’s not a question of the money, but more about all the effort that went into this labor of love. I can augment it with more work for next year. And by then, I will be in need of creating something new.”

“This one took me eight months to do,” he said. “I want to have it around to enjoy a bit before I give it away.”

New LI dessert spot serves coffee imprinted with your photo
3:36
10 events, things to do this weekend on Long Island
3 LI restaurants to try this weekend
LI drive-in, outdoor movie and concert schedule for summer
New seafood spot opens in Bayville
Family carnivals are back: Put these dates in your calendar
Didn’t find what you were looking for?