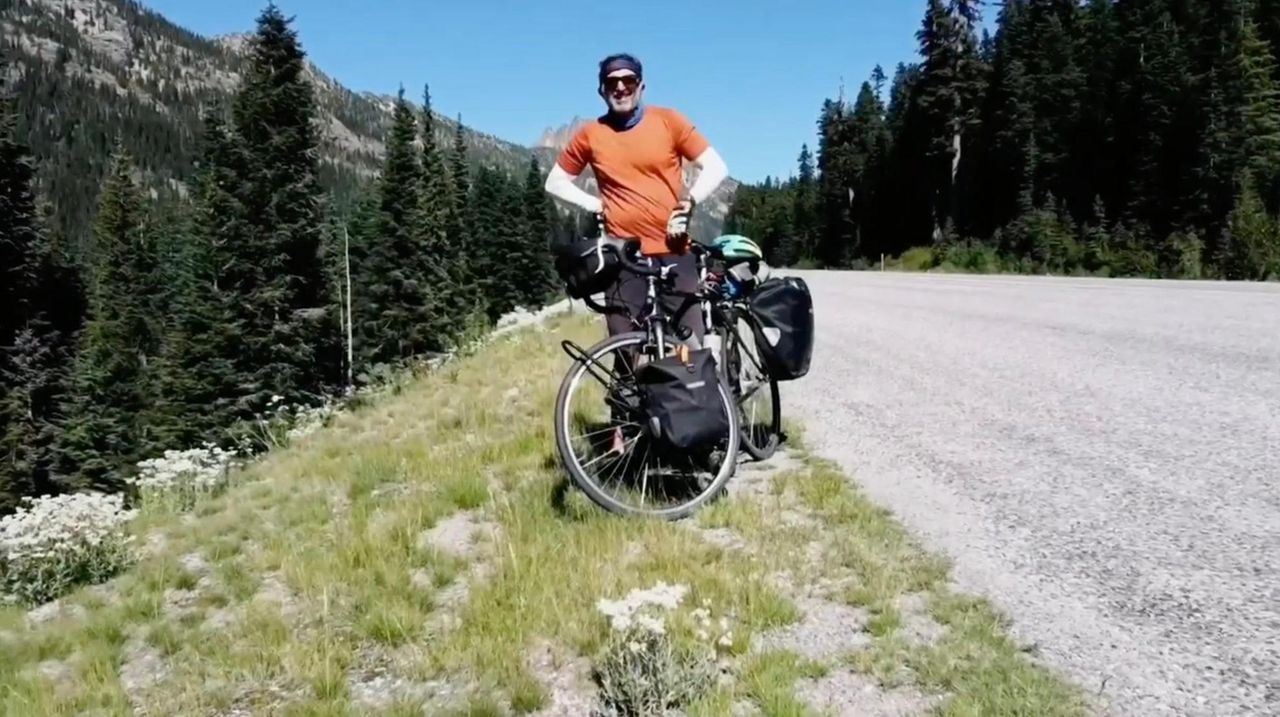 When PriceWaterhouseCoopers offered David Silverman an early retirement, he rolled with it — all the way from Long Beach to Anacortes, in Washington state. Here, he shares video footage he shot in and around North Cascade National Park and Anacortes. Credit: David Silverman

David Silverman has had a lifelong dream: to ride across the country by bicycle.

When he took an early retirement in September 2020 from PricewaterhouseCoopers, where he worked as a partner for 31 years running the emerging technology division, Silverman decided to ride that dream to reality.

Silverman’s love for cycling developed in earnest as a young teen when he would frequently pedal from his home in Oceanside to Long Beach, where he liked to ride near the beach, relishing the freedom he felt atop two wheels.

"As soon as I get on it and start pedaling, there’s this feeling of freedom," he said. "Whatever the joy was when I was a kid, it still kind of resonates with me."

Checking off the first item on his bucket list on Sept. 3 — after 70 days on the road — Silverman, 57, returned home to Dix Hills from his epic adventure having clocked 3,883 miles from the Atlantic Ocean to the coast of Washington state.

Despite an abiding passion for the sport, Silverman hadn't ridden too often before planning his adventure — taking about one 30-mile ride a week — and typically tapered off once the temperatures dropped in October.

Eager to train for his impending journey, he rode straight through last winter, supplementing his fitness regime with a stationary bicycle, hockey and gym workouts.

To get ready for the cross-country trek, Silverman increased his riding to about 50 miles a week from December through February, and then to about 80 miles a week in March. In the month of April 2021 alone, he rode 450 miles.

"I definitely was riding more than I had been, but nowhere near what I knew I was going to be doing when I would start the ride," he explained.

For his journey, Silverman bought a 27-gear Trek 520 touring bike equipped with back and front racks, to which he attached panniers that would hold a sleeping bag, tent, two sets of cycling outfits, rain jacket, extra layers for cold weather, bike tools, toiletries and other supplies.

With an assist from Adventure Cycling Association, which maps out routes for cyclists, Silverman set out from Long Beach on May 18 with his son, Jacob, 25. The plan was for Jacob, a CPA, to ride with his dad to Ann Arbor, Michigan, where they’d rendezvous with Jacob’s sister, Julia, 21, a University of Michigan senior, after which he would return home, leaving Silverman to finish solo.

On the third day, father and son, who had cycled nearly to Buffalo, got an urgent call from David’s wife, Hope Silverman. A competitive figure skater, she had hurt her ankle while training. A few days later, when they learned she would need surgery, David and Jacob rented a car to return home.

"I was all for it, because I knew he wanted to do it," Hope said of her husband’s cross-country ride. She had expected to be busy all summer training for competition.

"I just felt so bad because this was his dream and he was already gone," she said of his return. "But I did need him in the end."

Once his wife had been upgraded to a walking boot and could drive, Silverman took off again on July 1 for Buffalo to pick up where he’d left off — this time by himself.

A day in the saddle

But for Silverman, a history buff, the natural way to explore the country was east to west, mirroring its early westward expansion. His route took him along the Empire State Trail, which begins in Manhattan and leads to the Erie Canal. From there, he traveled the northern tier heading west, frequently passing people riding in the opposite direction

"You start in the city, and then it starts to get into farmland and then all this great open space, and then you get to the mountains and the Pacific, [that] is the way I always imagined to do it," Silverman said.

On a typical riding day, beginning about 9 a.m., Silverman would average about 60 miles, sometimes riding with people he encountered on the road, trying not to be intimidated by those riding faster or longer.

"I passed a sign in a small town in Minnesota that said, ‘The finish line is for the ego. The journey is for the soul.’ That saying became my mantra," he said.

During his rides, Silverman stopped to eat lunch at gas stations and fast-food restaurants. Other days, when there was no place to stop, he was sustained by energy bars, Gatorade and water.

In addition to using the Adventure Cycling website, Silverman surfed the internet for cycling routes, hotels and campsites.

"Every night when I finished, I would plan out the next day," Silverman said, scoping out where to eat and whether to camp or find a motel.

In Ann Arbor, by July 6, Silverman spent a couple days with Julia, going out to eat, shopping and visiting the arboretum. On July 8, they celebrated Silverman’s 57th birthday, watching "Breaking Away," one of his favorite movies — which happens to be about cycling.

Back on the road and in Minneapolis on July 25, Silverman took off two more days to spend with his wife, who’d flown in.

The next leg of his trip would take him, after a few days of strong winds and biting cold, to Great Falls, Montana, where he took a break Aug. 16 before beginning his Rocky Mountain ascent.

Pedaling evinced a feeling of being one with nature and the creatures he passed, from the ill-fated dead deer to the placid cows grazing in pastures, affected him intensely, Silverman noted. "I got this appreciation for how incredible wildlife is," he said.

One too-close-for-comfort animal encounter happened at a Montana truck stop, where he’d pitched his tent near a ravine. During dinner, the locals warned him about a resident mountain lion, whose cries they said resembled a woman screaming.

"About 1 in the morning I woke up to screaming of the mountain lion, and it sounded like it was right by my tent," he said. After much trepidation and Googling the likelihood of being attacked, Silverman said, the screaming abated, and he eventually fell back asleep.

Until he reached Washington state, Silverman said, New York’s Hudson Valley and the Lake Erie corridor were among the most beautiful sights he beheld.

"For much of the country you may have farmland, forests or mountains, but here you have all three at the same time, along with incredible views of the Hudson River," he explained.

Other highlights, Silverman said, were the Wisconsin Bluffs — a welcome break from seemingly endless cornfields — where mountains rise from the Mississippi River, Minnesota’s countless tranquil lakes, and the gentle rolling hills of the Great Plains of North Dakota.

After a few difficult days of riding in wind and rain in Montana, he entered Glacier National Park, with its jagged snow-covered peaks, lakes, forests and wildlife, to embark on his first major mountain climb. The weather remained cold yet mercifully dry on Aug. 19, when he traversed the Going-to-the-Sun Road, which cuts through the park and across the Continental Divide.

He climbed a couple of thousand feet for five hours straight, buoyed by the majesty. "It was the easiest ride," he recalled. "I was floating up there. I’d stop every half mile, not because I was tired, but because I saw another view that was the most amazing view I’d ever seen. That was a magical day!"

Once in Washington, he climbed a mountain pass each day across the Cascades and then, nearly at the end of his trip, ascended Washington Pass, riding alongside the pristine, turquoise, glacier-fed Diablo Lake.

"It was just the most stunning, stunning beautiful place," he said.

A self-described introvert, Silverman said his trip motivated him out of his comfort zone. He struck up conversations with people in convenience stores, restaurants — anywhere.

At home on Long Island, Silverman might have felt uncomfortable dining by himself, but on the road it was relished, particularly as a way to meet people whose lives were different from his own

In Little Yellowstone Campground in Kathryn, North Dakota, he met an older couple with their granddaughter and learned that the grandfather had traveled six miles for six minutes each day to his job for 40 years, seeing only one other person along the way. Silverman offered that his daily 40-mile commute into Manhattan took two hours, during which he’d see thousands of people, mostly strangers he would never know.

"That was a moment on the trip that kind of resonated with me," he mused. "The difference between small-town life and living in a big city."

He also found daily routines, normally taken for granted, transformed. A simple dinner became a top culinary experience after a long ride rendered him ravenous. "I found joy in many small things that in my regular life would be overlooked: a hot shower at a campground, a bathroom in a gas station, a Big Mac at McDonald’s, a bench to sit on in a town park, a large ice-cold soda."

After 65 days of cycling — and only three flat tires — he arrived in Anacortes, Washington, shipped his bike home and flew back from Seattle.

In spite of the mountainous terrain, cold, rain and wind, the hardest part of the trip, Silverman admitted, was being away from his wife for so long.

"My dream would be that she would fall in love with riding a bike and touring with me, but I haven’t been able to convince her of that," he said.

Though she supports her husband’s dreams, Hope said she found living without him all summer somewhat difficult. "But I would never want him to not do something that he wanted to do," said Hope, 56. "He loves to travel, and just being in nature and the open road, that just gives him so much pleasure."

Silverman's mother, Gilda, 85, of Oceanside expressed pride and happiness — and a little worry — over her son's adventure. "After he left, I realized it was a good thing, because he was able to go at his own pace, so he did what he wanted and went where he wanted," she said. "So, I was very happy for him."

For his part, Silverman is profoundly satisfied to have accomplished a lifelong dream, one he wasn’t always sure would become a reality.

"In the end, I knew that the only way I was going to finish the trip was if I started it," he said. "As I neared the Pacific, I felt incredibly proud that I was able to cast all the doubts aside, live in the moment and actually fulfill my dream.

"It was a truly incredible feeling."