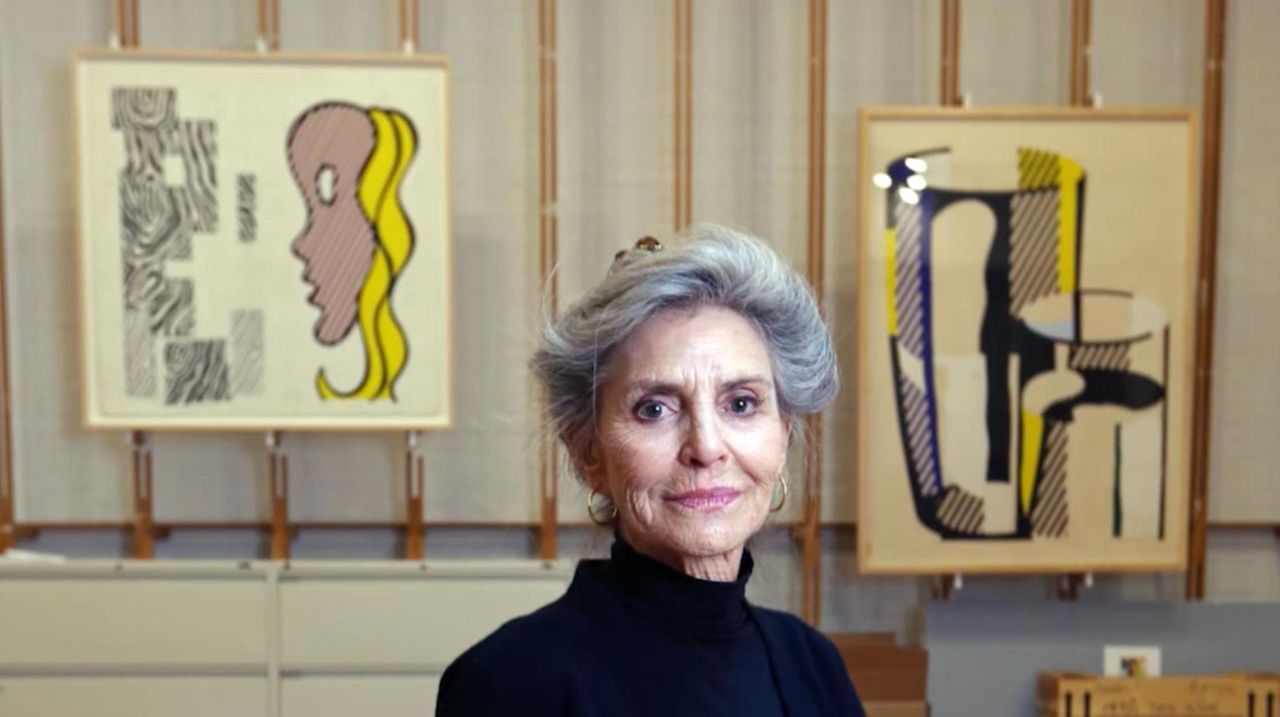 Dorothy Lichtenstein reminisces about her husband, the artist Roy Lichtenstein who died in 1997. She will be honored April 11, 2018, at the Stars of Stony Brook Gala for her work for the university sciences and arts. Credit: Bruce Gilbert

A keen yearning for advancing the sciences no doubt inspired Lichtenstein, who is a member of the New York Stem Cell Foundation Leadership Council, to become a Stony Brook Foundation trustee in 2008. But her interests go far beyond Stony Brook’s core concentration, and because of her continued support for the university’s growing arts initiatives, such as the Southampton campus’ creative writing and film programs and the Pollock-Krasner House and Study Center, on April 11 she’s being honored at the Stars of Stony Brook Gala, which has in the past also honored luminaries such as singer and actress Julie Andrews and businessman Charles Wang.

“Last year, we wanted to highlight our cancer center, so we honored Joe Biden,” who launched the Cancer Moonshot initiative while vice president, says Stony Brook University president Samuel L. Stanley Jr. “This year, we want to highlight our extraordinary programs in the Southampton campus. The logical person to pick to honor that is Dorothy Lichtenstein. She has an incredible engagement with the arts programs there and, of course, she’s a champion for the arts nationally and internationally.”

Indeed, Lichtenstein maintains an active schedule, serving as president of the Roy Lichtenstein Foundation, which is dedicated to the works of the late artist, who became famous for his comic strip-style pop art, and other artists of his era. In 1997, at 73, he died of complications from pneumonia. Among other activities, Dorothy Lichtenstein is also on the board of directors of the Robert Rauschenberg Foundation, and the Trisha Brown Dance Company, and is a lifetime trustee of the Parrish Art Museum in Southampton.

She supports Stony Brook’s East End campus in multiple ways. For example, in 2013 she gifted a million dollars to the Southampton Graduate Arts Program. She’s also been a student on those grounds, participating in writing workshops, classes and lectures. That’s how she became involved with the SUNY school in the first place.

Robert Reeves, associate provost of Southampton Graduate Arts Campus, recalls meeting Lichtenstein about 15 years ago during a summer writers conference, at a reading by faculty member and author Roger Rosenblatt, which included a humorous introductory video from “Angela’s Ashes” author Frank McCourt. “Dorothy was in the audience. She thought it was so much fun, and she was a great admirer of Roger and Frank. So she came up to me afterward, saying, ‘How can I participate to support your programs?’ She’s been fundraising for us ever since,” Reeves says. “She’s authentically generous. She cares about our programs in the way we care about them.”

Southampton isn’t just a learning environment — it’s also home for Dorothy Lichtenstein. She and Roy bought a house in Southampton in 1969 and moved in a year later. While they had friends living nearby, “it was very quiet back then,” says Lichtenstein, joking that to prepare for the offseason solitude, she’d ordered an entire Encyclopaedia Britannica set to keep herself occupied while her husband painted.

Slowly they enhanced the main house, at one point considering a third floor which was to be Roy’s art studio. But that idea had to be scrapped, Lichtenstein laughs, as the plans called for an eight-foot ceiling, which wasn’t nearly sufficient for his larger-than-life-sized paintings.

In contrast, the cavernous workspace in their West Village converted factory, which they purchased in 1988 as a part-time home and studio, has 16-foot ceilings on the main level. Today, the space serves as an office for staff members of the Estate of Roy Lichtenstein and the Roy Lichtenstein Foundation. There’s a grand piano in the center of the room and the full-length mirror the artist used to visualize his works in progress. Visitors are greeted in the entrance by bentwood furniture he painted, “Brushstroke Chair Wood” and Brushstroke Ottoman Wood.”

Upstairs is a smaller residential area featuring on one wall a Roy Lichtenstein Chinese landscape print, on another an original Andy Warhol painting of Warhol’s mother. Dorothy Lichtenstein, svelte and elegant in simple black pants and turtleneck, her gray hair pulled up in a bun, takes delight in pointing to a pair of brass, high-heeled shoes on a shelf. They were made by Yoko Ono.

But this is still her part-time home. Most of the couple’s time together was spent in their Southampton house, where a separate art studio was eventually built across the lawn. “We lived there year-round for 12 years without having a place in the city,” Lichtenstein says. “It’s really where we raised the boys. I got to meet them when they were 71⁄2 and 9. They spent every vacation with us.” Mitchell and David Lichtenstein, who today sit on the board of the Roy Lichtenstein Foundation, were Roy’s children from his first marriage to artist Isabel Wilson. They divorced in 1965.

Dorothy Herzka, originally from Bed-Stuy in Brooklyn, had studied art history and political science at Arcadia University in Pennsylvania. She met Roy Lichtenstein while she was employed at the Bianchini Art Gallery in Manhattan. “We were doing an exhibition, “The American Supermarket.” A lot of contemporary artists had done work that was related to food. Andy Warhol had soup cans, Jasper Johns made sculptures of a beer can,” she says. Roy Lichtenstein made enameled hot dogs. She and Roy married in 1968.

The Roy Lichtenstein Foundation was formed two years after his death. Before he passed, “we had talked about making a foundation so that there would be a repository for works that I inherited, which was really everything, from the archives to the paint he used, sketches, letters,” she says. Today, “we have a really tremendous staff and executive director. I try to stay in the background, and let them do their work.”

Her own behind-the-scenes work has been acknowledged previously. Lichtenstein received an honorary degree of doctor of humane letters in 2014, for her significant patronage of Stony Brook University’s East End arts programs and their scientific research projects, especially the centers in Madagascar and Kenya.

“I always feel a little awkward when I’m honored,” she confides. But the upcoming gala is especially rewarding, as it’s another nod to her quest for advancing her passions — the sciences and, of course, the arts.

“To be a champion of the arts is to try to expose people to the effects of art, of creativity, to express ourselves as human beings in creative ways,” she says, “and to bring that to whatever careers we chose.”

Patchogue bakery opens location inside new LI library
Didn’t find what you were looking for?