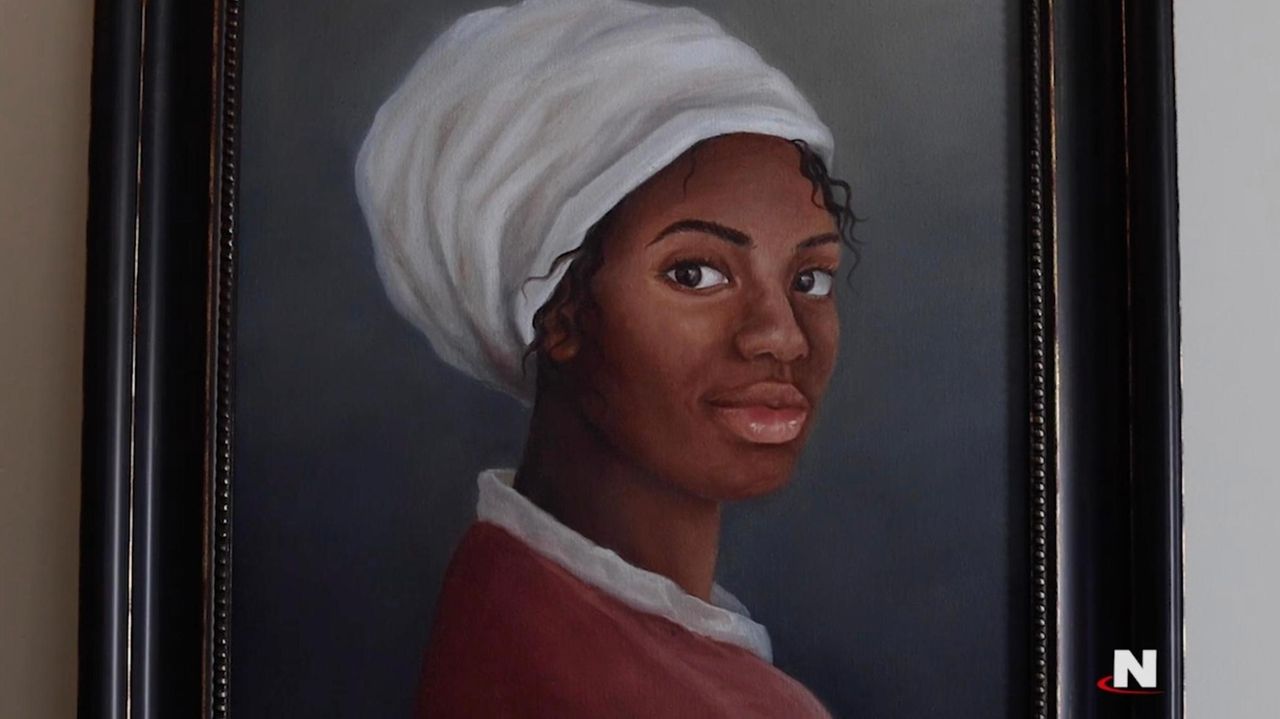 Claire Bellerjeau, Raynham Hall Museum's historian, dug through historical documents to piece together the life of Liss, an woman enslaved by the Townsend family of Colonial Oyster Bay. Liss' life is the subject of Bellerjeau's book, "Espionage and Enslavement in the Revolution: The True Story of Robert Townsend and Elizabeth," due out in March. Credit: Kendall Rodriguez

What Claire Bellerjeau lacks in formal training as a historian she makes up for with persistence.

The 54-year-old Oyster Bay resident followed an unusual path to becoming the historian and director of education at Raynham Hall Museum in the hamlet. After majoring in theater at Hofstra University, Bellerjeau used that training to forge a career as a storyteller, an occupation that led her to begin digging into the past.

An ebullient and relentless researcher who prides herself on never giving up at roadblocks on the hunt for obscure records, Bellerjeau has made stunning historical discoveries.

And now one of those — made 16 years ago — has become the subject of her first book. Not surprisingly, it’s about Robert Townsend, a key member of the Culper Spy Ring that helped George Washington win the American Revolution and the most famous occupant of the Oyster Bay home that became known as Raynham Hall in the Victorian era. "Espionage and Enslavement in the Revolution: The True Story of Robert Townsend and Elizabeth" details the merchant’s extraordinary effort to rescue an enslaved woman who had run away from the family and was resold in South Carolina. The book, co-authored by Tiffany Yecke Brooks and with a foreword by actress Vanessa Williams, will be published May 1 by Lyons Press.

A love of storytelling

Bellerjeau was born in New Orleans, where her father was a French Quarter street artist. Before she graduated from high school in Missouri, her family had moved 11 times as her eccentric father tried to live off the grid. She came to Long Island to attend Hofstra, where she met her husband, Chris, in pursuit of a strong theater program in the New York City area.

"I got interested in history because to me a lot of history is storytelling, and I love storytelling," she said.

With jobs in the theater scarce, "I worked narrating audiobooks. And then I realized I could do audio tours of museums or towns." She started Soundvision, an audio tour company, while running a gift shop in Oyster Bay.

One day in 2003 she convinced the Raynham Hall director to let her create an audio tour. Bellerjeau started by focusing on a decorative jug dated 1795. When museum staff didn’t have information about it, "that kind of triggered me to start my first history detective investigation, which went on for the better part of two years," she said. Her investigation uncovered connections to founding father John Jay and Patriot writer Thomas Paine.

"I thought that was it," she said of that initial project. But Bellerjeau had also begun working as a weekend docent at Raynham Hall in 2005 — the same year the museum bought for $10,000 a Townsend family Bible, which had written in the endpapers the names of 17 of at least 30 enslaved people owned by Samuel Townsend and his children in Oyster Bay or elsewhere in the state.

"I convinced them to let me do the research of what this meant," Bellerjeau said. She searched documents for evidence of slavery and made a spreadsheet of every mention of an enslaved person, 300 in all, that led to a yearlong exhibit.

Her research turned up a reference to Liss, a woman enslaved by the family. She learned the East Hampton Library had Townsend family letters and got copies in 2005. They detailed how Liss, formally Elizabeth, had run away with a British regiment stationed in Oyster Bay and Robert Townsend’s work to get her back.

"I was so interested in getting to the bottom of who she was, but it was a long, long, long research journey," Bellerjeau said.

Piecing together a life

The East Hampton letters were written by Robert and his older brother, Solomon, to Solomon’s business acquaintances in South Carolina seeking help in locating Liss. Then Bellerjeau found at the New-York Historical Society a letter written by the Townsends’ friend Adam Gilchrist, who lived in South Carolina and whose help the brothers had enlisted. She followed up on leads to documents in Toronto and Charleston, at the Mystic Seaport Museum and the University of Michigan until she had almost the full story.

"It’s a story of someone who was born into slavery about 1763 at the Townsends’ house in Oyster Bay alongside as few as a dozen and as many as 20 other enslaved people," Bellerjeau said of the historical narrative she pieces together in her book. "She was raised with the family of a patriotic leader, Samuel Townsend, who was a member of the New York Continental Congress. Because of his importance, the house became headquarters for British regiments during the Revolution."

The commander of one the regiment, Col. John Graves Simcoe, of the Queen’s Rangers, who would found the city of Toronto after the war, was an early abolitionist. And when the regiment left Oyster Bay in May 1779, Liss hid in its caravan, presumably with Simcoe’s assistance.

A week later, Robert, who was living and working in New York, wrote his father, blaming Liss’ escape on Simcoe and urging his father to write off her off as "a dead loss."

Liss was enslaved again in Manhattan, but Bellerjeau said, but she has not been able to determine by whom. During that time, she had contact with Townsend, who mentioned buying things for her in his ledger book.

"Near the end of the war in 1782, she comes to him and says ‘Repurchase me. I don’t want to be evacuated with the British,’ " said Bellerjeau, whose research has led her to believe Liss was then three months’ pregnant. Robert, who was living with a brother and cousin in Manhattan and was possibly the father, paid his father 70 pounds for Liss because Samuel Townsend still legally owned her. It’s unknown whether Robert paid anything to the person who enslaved her in Manhattan.

In August 1782, Robert Townsend brought Liss into his household, where she gave birth to a mixed-race son, Harry.

But Robert did not want to continue owning Liss because of his growing feelings that enslavement was immoral, Bellerjeau said. Yet, inexplicably, he did not free her. Instead, six months later, he arranged to sell her to a recent widow, Ann Sharwin of Manhattan, for the same 70 pounds — with the verbal understanding, described in East Hampton Library's Townsend letters, that Liss and her son would remain in New York unless Sharwin left New York, in which case Liss would be sold back to Robert for the same 70 pounds.

The transfer would prove disastrous for Liss. Sharwin soon remarried and then quickly separated from Alexander Robertson, who had been paying improper attention to Liss — who had already become Robertson’s property through marriage. In January 1785, Robertson had Liss transported to Charleston, where she would be sold for the fifth time in 22 years. Robertson kept her son, who was about 2.

Liss' fifth new owner was Richard Palmes, a violent man who had played a part in instigating the Boston Massacre and later served as a bodyguard for John Adams.

Two years later, when Townsend learned what had happened to Liss, "he confronted Robertson and took Harry into his own custody and he was raised by enslaved people in Samuel Townsend’s household in Oyster Bay," Bellerjeau said. Learning about Liss’ fate, Townsend began planning to return her to New York.

"The last letter we have is Gilchrist saying ‘I will cheerfully accomplish this for you,’" Bellerjeau said.

One stumbling block to Liss' return to New York was a change in the law that had made it illegal to bring slaves into the state. Liss was most likely smuggled from South Carolina to Oyster Bay on a ship owned by the Townsends or an acquaintance, Bellerjeau explained. There is no record of how that occurred.

And again, after paying for Liss a second time, Townsend still did not free her immediately — despite becoming a member of the New York Manumission Society in 1785. "He couldn’t free her because he had brought her back into the state illegally," Bellerjeau explained.

The first record of Liss’ return to New York is a mention in the Oyster Bay Baptist church records in 1789. Bellerjeau believes she had come back to New York two years earlier and lived with the Townsends in Oyster Bay. Liss was reunited with Harry at the Townsend home in Oyster Bay for a few years, until Townsend sold him in 1804 to a Jotham Weekes, who agreed to free Harry when he turned 24.

Liss' status in the household and future life are unclear. Bellerjeau said evidence points to it being Liss who shows up as "Free Elizabeth" in the census of 1790, the year Samuel Townsend died, in the household of David Richard Floyd-Jones in what would become Massapequa. That is the last known mention of her.

Bellerjeau speculated that moving Liss to live with Floyd-Jones was the Townsends’ way to free her and obscure that she had been brought back to New York illegally.

"I’m looking to tell the story and get the idea into people’s heads that people like Elizabeth can be Founding Fathers and Mothers," Bellerjeau said. "That our story of America can have as a primary figure a person who lived a life like hers.

"Long Island children are certainly not taught that we had such a high proportion of slavery here. We cannot heal as a country if we do not admit the truth of what happened in our country."

Denice Evans-Sheppard, the Oyster Bay Historical Society's executive director, commented that "the 20 individuals enslaved by the Townsend family have been made a little more visible by Claire. Still in the shadows of history are other enslaved, freed, indentured servants and free people of color."

In her research, Bellerjeau has unearthed documents showing enslaved people were whipped and tortured in Colonial Oyster Bay — and presumably throughout the state.

In going through Townsend family records at the New-York Historical Society in 2015, she unearthed a copy of a sixth and previously unknown poem by Jupiter Hammon, an enslaved man from Lloyd Neck who was America’s first published Black author.

And in the papers at Raynham Hall, she discovered an 1830s copy of what she is calling The Oyster Bay Declaration. In 1662, Henry Townsend, one of the first town clerks, wrote a document in support of religious freedom that was signed by him, his brother John and other prominent residents. (Henry and John Townsend had gained notoriety in 1657 for signing The Flushing Remonstrance, which historians call a precursor to The Bill of Rights.)

The Oyster Bay document attests that the residents "desire of doing right to all men according to our ability & condition" and promise "to Stand by & bear out those who may come into Trouble."

It’s Bellerjeau’s track record uncovering such historical documents that prompted Raynham Hall executive director Harriet Gerard Clark to say that "Claire’s passion for getting at the truth about our past is what makes her such a determined and accomplished researcher, and also such an engaging teacher. She has enlarged the understanding of Long Island history."

CORRECTION: Henry Townsend was the Oyster Bay town clerk who signed the The Flushing Remonstrance in 1657; his first name was incorrect in an earlier version of this story.

Attend one of these upcoming events to learn more about “Espionage and Enslavement in the Revolution: The True Story of Robert Townsend and Elizabeth, by Claire Bellerjeau.