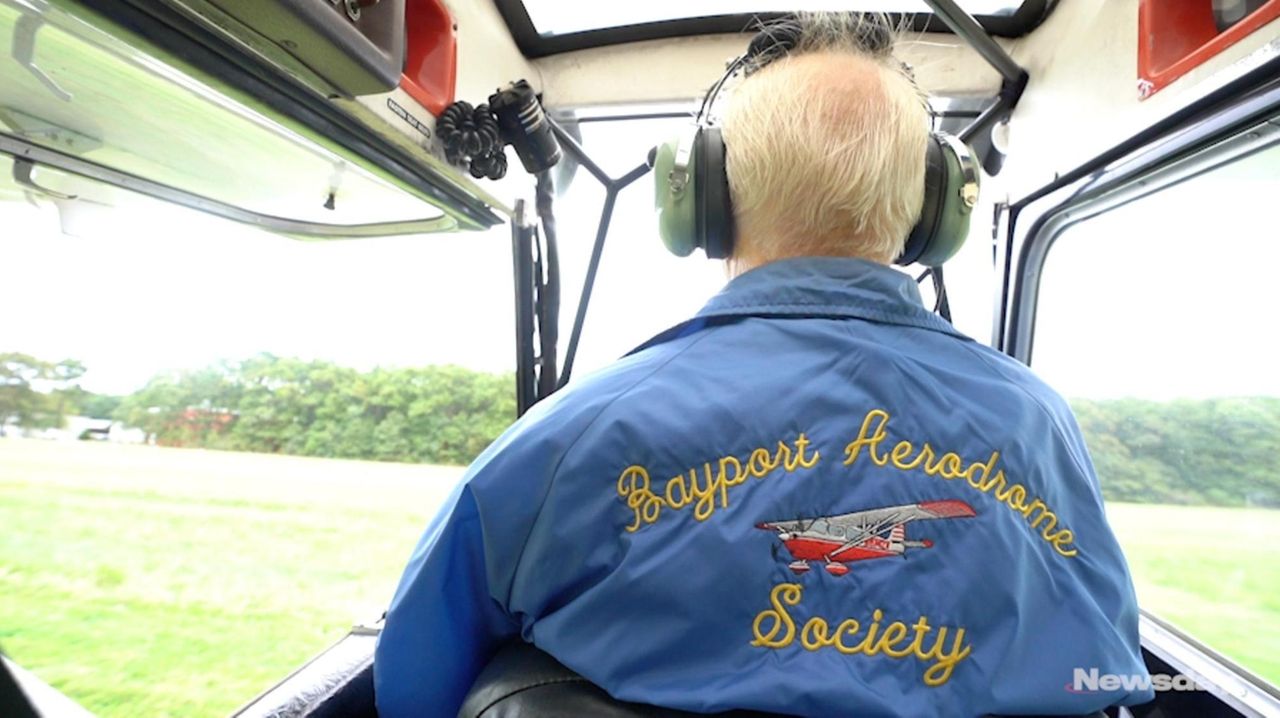 J.C. Follender, 85, and Jesse Eldridge, 76, of East Islip, are a married couple who love to fly the friendly skies together. They're among a growing group of aviators age 50 and up who enjoy being above it all.  Credit: Randee Daddona

Larry Guerin never set foot in a plane with fewer than 30 seats until October 2017, when he found out his friend was learning to fly.

“I thought, if he’s doing it, it’s something I can do,” said Guerin, who first flew an airplane at age 50. “I fell in love with it. I came to realize how much it opens up opportunities to travel and do things that I never thought of before.”

Guerin, 52, of Holtsville, stood proudly near his recently acquired Piper M350, something that a few years ago he couldn’t have imagined. “It was challenging,” he said. “That’s what made it interesting to me.”

Guerin, who last October sold a software company where he still serves as CEO, spends time in the conventional clouds these days as well as the high-tech one. He flies to Martha’s Vineyard, Niagara Falls, Portland, Maine and elsewhere for the weekend or the day as well as the Bahamas and Texas, he said.

Guerin also uses flying to indulge another hobby. “I love fishing. The best place to fish on Long Island is Montauk,” he said. “I fly from Islip to Montauk to fish.”

Flying has become a big part of his life, taking him to places he likely wouldn’t visit or visit as frequently. “In the year and a half I’ve been flying, I have 700 hours of flying,” he said. “That’s about 30 hours a month.”

Guerin is among a growing group of aviators age 50 and older who enjoy being above it all. J.C. Follender, 85, who owns a Citabria, said she believes many people dream of flying only to do it years later.

“A lot of people want to fly when they’re 20,” said Follender of East Islip. “They can’t afford it. They get married, have children, houses. The kids grow up and they say, ‘Now I can learn to fly.’”

While people in their 20s often train to become professional pilots, older private pilots are often the ones who can afford to sail through the skies for pleasure.

“Fifty and up are generally the business owners,” said Jim Orehosky, operations manager at Mid Island Air Service at Long Island MacArthur Airport in Ronkonkoma. “They have the money to spend. Most of our aircraft owners are 50 and older.”

Long Island has a long history of aviation, from trans-Atlantic flight trailblazer Charles Lindbergh to Island-native manufacturers Grumman Aircraft and Fairchild Aircraft. If planes aren’t mass produced here as they once were, the affection for aviation remains.

“This was a big aviation community,” said Matthew Hunt, 43, of Wantagh, who flies a rented Cessna 152. “We used to build a lot of aircraft out here.”

Nationwide the number of student, private and commercial pilot licenses issued increased 4% and general aviation aircraft shipments rose 2.5% in 2017, according to the Aircraft Owners and Pilots Association’s most recent data.

With more than 5,000 general aviation aircraft based in New York, the state ranks 16th nationwide; it has far more than many states, but considerably fewer than Florida (15,000-plus), and Texas and California (each with 20,000-plus), according to AOPA.

“You feel a little freedom out there,” Hunt said. “You’re part of a unique community.”

Flying is transportation for some, entertainment for others and adrenaline for nearly all of the older Long Islanders who talked about the pleasure of being a pilot.

“It’s a wonderful experience,” said Jim Mularadelis, 77, “to be able to get into an airplane and fly and observe the planet, life from a little different perspective.”

Aviation, private pilots said, is the antithesis of automobiles crisscrossing the Island. The highway in the sky may seem crowded — until you glance at traffic below.

“It’s like three-dimensional driving,” said Don Lawrence, flight operations and training manager at Mid Island Air Service. “There are rules you have to follow, but you’re free to go up or down, left or right. It’s exhilarating.”

Rafael Campos, 60, who lives in Woodhaven, Queens, and learned to fly eight years ago, calls his interest in flight “a midlife crisis.”

“After you work all your life, you save some money,” he said. “Either you buy a sports car or you do something crazy. I went with the latter.”

Pilots’ passion for flying often starts long before they get their wings.

“I grew up next to a small airport in the Dominican Republic,” said Campos, who came to the United States in 1974 at age 16. “I saw small aircraft flying in and out. It got in my mind.”

Hunt became fascinated after peering into the cockpit on his first commercial flight. “It goes back to my childhood. I was a passenger on TWA to Dallas,” he said. “We got a chance to go to the cockpit and meet the pilots.”

Grace Schoenemann, an 82-year-old Smithtown resident who worked as a corporate pilot and at Sunrise Aviation in Flushing, Queens, was 39 before she “stepped into an airplane.”

“I took a ride down the [Long Island] Expressway,” she said. “I saw an airplane turn wings up to go to the airport. And I thought that looks pretty. I’ll have to try that sometime.”

She studied and soon called her husband, William, asking, “What’s my favorite color?” — obliquely indicating she’d found something she wanted in that color.

“He bought me the airplane,” Schoenemann said of her blue Cessna 172 Skyhawk, which she still owns.

Pilots tend to remember their first flights — and like to relive them.

“As the ground falls away from you, you’re so overwhelmed by that feeling,” said Al Poxon, 70, of Stony Brook. “It’s the challenge of conquering gravity.”

Guerin remembers feeling fear more than freedom as his instructor said, “You’re going to miss me more in the next 10 minutes,” before his first solo flight.

Deer Park resident Jerry King, 80, ran into problems in his first flight in 1997. “I thought I was going to die,” he said. “Three things went wrong at the same time.” There was a leak in the air speed indicator, so the Cessna 172 registered near stall speed; a section of the windshield collapsed into his lap; and approaching the runway to land, a severe crosswind required him to maintain a nearly 45-degree angle to avoid drifting. He made it through and has kept on flying.

“I had a flashback of an old Humphrey Bogart movie where he played a criminal climbing a tower,” King said. “I was very much relieved to be on ground after the first landing.”

While piloting small planes can be fun, it’s also dangerous.

Dan Burke, a 60-year-old Oyster Bay Cove resident and patent, trademark and copyright attorney, said knowing when to fly matters as much as knowing how.

“The most important thing about general aviation is knowing when to stay on the ground,” he said. “You need the personal fortitude to tell other people that you’re just not going, regardless of who they are.”

Dr. Charles Calabrese, 68, a retired plastic surgeon who flies and leads safety sessions for pilots (like one recently sponsored by Mid Island Air Service), said bad weather shouldn’t lead to bad decisions. “Respect the weather,” said the St. James resident who started flying at 51. “Make sure you know what the weather’s doing.”

As for many pilots, certification hasn’t ended flying education for Wei Guan, 57, of Rockaway Beach, Queens.

“I just like it,” Guan, who’s been flying for 19 years, said at a session where Calabrese discussed spatial disorientation and hypothermia. “There’s always more you can learn, improve your skill.”

The sky’s the limit

The sky isn’t the only thing that’s high for pilots: So are costs — though there are ways to economize.

James Plackis, 94, an experienced pilot and instructor who has taught Campos for free for three years, puts it succinctly. “It’s a rich man’s game,” he said. “To buy one hour of flight time can cost close to $200.”

Follender said groups like the Mid Island Pilots’ Club can help those who want to fly save money on fuel.

“Several people own an airplane and they share the flight time and expense of the airplane,” she said of another option. “A 20-year-old can’t do it anymore. My father put me in an airplane when I was in diapers. It doesn’t happen anymore.”

Other flying clubs on Long Island include the Bayport Aerodrome Society, GACE Flying Club and the Telephone Employees Flying Club.

Sharing planes and maintenance can cut costs and increase flights. “I have three partners who share the expense for the hangar, operational cost,” said Mularadelis, who lives in West Islip and keeps his 1945 Aeronca Champ at the Bayport Aerodrome. “We pay for our own fuel when we fly.”

John Nelson, 73, of Dix Hills, is seeking to launch pilot2pilot.com — whose slogan is “Why fly alone?” — to help pilots pool resources.

“You get tired of flying alone,” Nelson said. “I share expenses. I used to fly maybe once a month. I fly three times a month now.”

Getting a private pilot certificate

Oh, the places they go…

While many older people enjoy traveling, private pilots can take wing on a whim. “I don’t have the time to give a week here or there,” said Larry Guerin, 52, of Holtsville. “I’m able to see things on my schedule over a weekend.”

Wei Guan, a 57-year-old resident of Rockaway Beach, has flown to Houston, as well as to Oshkosh for a pilot’s convention.

“I try to fly at least once a week, sometimes more,” said Jim Mularadelis, 77, of West Islip, activities and events director for The Bayport Aerodrome Society. “Every so often, I go to Pennsylvania to Lock Haven for Sentimental Journey,” he said of the annual June event held where the Piper Cub was manufactured.

Many pilots fly to restaurants, landing at airports where they dine. “My two favorite hobbies are flying and eating,” Jerry King, 80, of Deer Park, said, adding that he likes “local places that have a restaurant on the field.”

Don Lawrence, who works in flight operations and training at Mid Island Air Service at Long Island MacArthur Airport, enjoys flying to Martha’s Vineyard for the day, going to beaches, hikes, museums, and even to Danbury, Connecticut, for Christmas shopping.

“There’s a restaurant right on the runway,” he said of Oxford, Connecticut. “You fly into the airport, park in the parking lot, walk through a gate and you’re in the restaurant. You sit, have lunch, watch planes fly in and fly out.”

Pilots also travel to makeshift runways that welcome planes by invitation. “We go to Montauk, Foster’s Farm at Sagaponack,” Mularadelis said. “A farmer has beautiful farm and his own manicured runway, and we’re invited. On Father’s Day, he invites us for a pancake breakfast.”

And, of course, pilots sometimes fly to visit family, although commercial air can still be the best way to traverse particularly long distances. “My family was in Pittsburgh. If the weather is reasonably good, you can cover a 300-mile trip,” said Al Poxon, 70, of Stony Brook. “Beyond 500 miles, it’s more cost effective to go by airline. Airplanes are expensive.”

New vegan deli, bakery opens in Sayville
Visit the Cradle of Aviation Museum, more things to do this weekend on LI
Didn’t find what you were looking for?