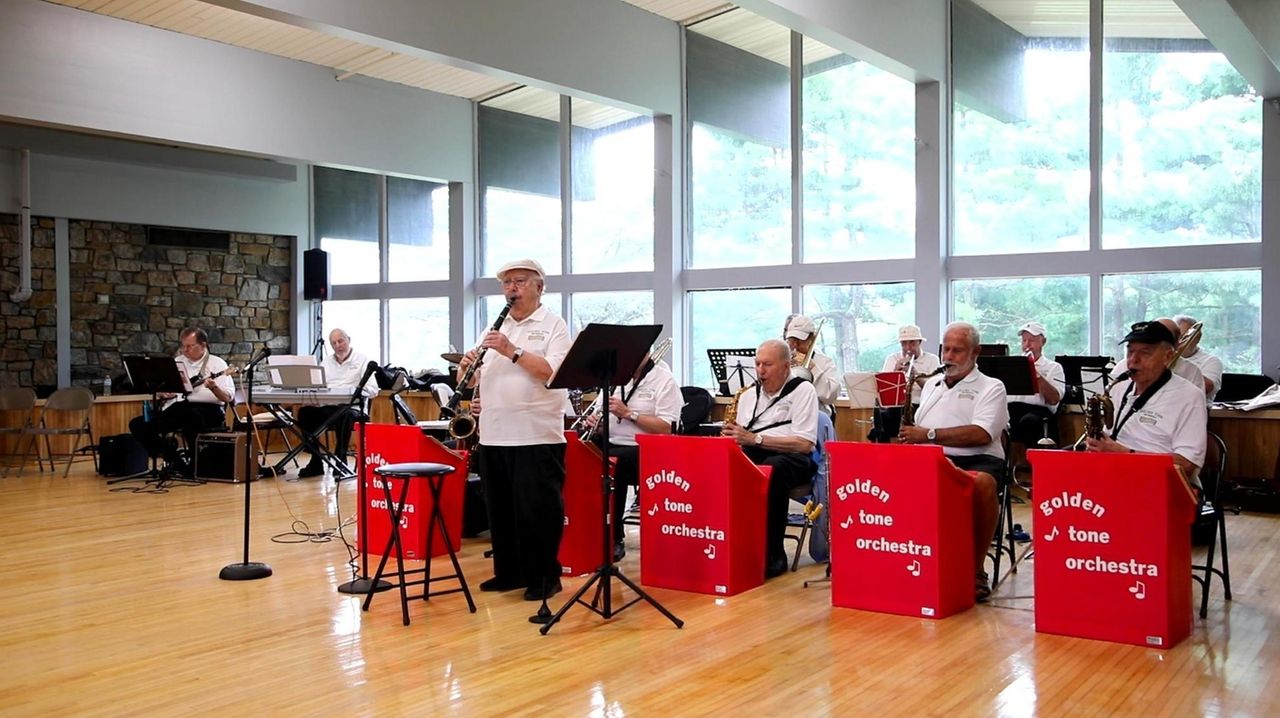 Nostalgia fills the air at performances by the Golden Tone Orchestra, which has been playing jazz and swing standards in Nassau County for more than four decades. Leading the band is Bobby Ferrari, 99, of Baldwin. In the 1940s, Ferrari toured the country with some of the Big Band Era’s most popular acts, playing the clarinet, flute and sax. Credit: Barry Sloan

At age 99, Bobby Ferrari of Baldwin can still play a mean clarinet.

Ferrari showed off his chops at a recent performance of the Golden Tone Orchestra, a band composed of 21 Long Islanders over age 50, most of them retirees. In front of the bandstand in the upstairs ballroom at the Merrick Road Golf Course Clubhouse, he stepped up to the mic and played the clarinet solo from the Louis Armstrong standard “Muskrat Ramble.”

Playing in the Golden Tone Orchestra has revived Ferrari’s musical career. As a younger man during the Big Band Era of the 1930s and '40s, he toured the country playing the clarinet, flute and saxophone for such bands as Shep Fields and His Rippling Rhythm Orchestra and the Tommy Reed dance band. He eventually left professional music behind to be a Grumman Corp. plant administrator, moonlighting with the Bethpage aircraft manufacturer’s house band. He joined the Golden Tones about 25 years ago, and for the past seven years has been its director.

“If I didn’t have this, I’d be home in a rocking chair watching television,” said Ferrari, a widower who is also the band’s emcee.

“The next tune is from the Benny Goodman library,” Ferrari said into the mic as smoothly as a 1940s radio announcer. “It’s a song called, ‘Let’s Dance.’” On cue, a half dozen couples twirled around the wooden dance floor in front of the band.

Nostalgia fills the air at performances by the Golden Tone Orchestra, which has been playing jazz and swing standards in Nassau County for more than six decades.

The band was formed in 1954 as the Golden Age Orchestra, said manager Sid Hausen. The Town of Hempstead provides the space, so performances are free. Bagel Plaza in Merrick and the Brandywine assisted living in Little Neck, Queens, donate refreshments for the midconcert break.

The band is still going strong after relocating its performance space six years ago from Freeport to Merrick. (They still rehearse at Freeport’s Cow Meadow Park.) The most recent event drew an appreciative audience of more than 50 people.

“They play the tunes that our generation really enjoys, and we’re still enjoying them,” said audience member Mary Schmitt, 74, of Rockville Centre. “They are all excellent musicians, and they are very friendly to all the guests,” added Schmitt, who often gets up to cut a rug with her husband, Hank, 76, especially when the band plays favorites by Glenn Miller or Artie Shaw.

“They really put their hearts into it,” said Lenore Jacobs, 84, of Lynbrook. She said the Golden Tones gave her an opportunity to socialize after her husband died. At a concert in November she met Don McGuirk, 84, of Bethpage, and they became fast “dancing friends,” smoothly moving about the floor in a fox trot or a cha-cha.

The band members range in age from 60 to 99 with an average age of 84, according to Hausen. Through health scares and life’s surprises, they keep coming back year after year so the music doesn’t stop.

“I could never not be a musician, it would be impossible not to be playing,” said Herbert Deutsch, 87, of Massapequa Park, a professor emeritus of music at Hofstra University and co-inventor of the Moog synthesizer. Deutsch joined the band four years ago, starting in the trumpet section, playing an instrument he first took up 75 years ago. When a keyboardist was needed, he switched to the electronic piano.

“The important thing to remember about virtually every member of that band is that they love to play, but they also have to play,” Deutsch said. “When you get older and you’ve been a musician all your life, you need to keep playing music as long as you’re able to do it.”

A key to health

The health benefit was confirmed by Dr. James Lolis, medical director of geriatrics and palliative medicine at New Hyde Northwell Health Physician Partners. Lolis said the concerts are “great both for them [the Golden Tone members] and the people that dance to them.”

“They are engaged with the community, they are out there making their music,” Lolis said. “Healthy aging really is healthy only if you are engaged in life and activities.” Lolis added, “I can’t imagine that it [playing an instrument] doesn’t help your respiratory muscles.”

Hausen, 87, helps Ferrari set up appearances at area libraries. The band has also played at the Northport VA Hospital. Hausen said the musicians are all volunteers. If it’s a paid gig, the money is divided up to cover transportation expenses, he said.

“This is a job that I wouldn’t give up for all the money in the world,” Hausen said. When audience members come from local assisted living centers, he said, “I enjoy seeing the pleasure that the band brings to people who come in with walkers and dance around.” Although he doesn’t play an instrument, he manages to join in the musical fun in the Glenn Miller novelty number, “Pennsylvania 6-5000.” “I’m the bell ringer,” he said.

Like many bands of yesteryear, the Golden Tone Orchestra is all-male — almost. Barbara Hausen, Sid’s wife, sings. As a teen she sang professionally in a society orchestra and went on to perform in the 1950s in USO shows at Army and Navy bases and VA hospitals. She resumed her singing career 20 years ago with the Golden Tones, interpreting such Big Band standards as “Almost Like Being in Love” and “I Don’t Stand a Ghost of a Chance With You,” and sometimes nudging the repertoire into more recent eras with material originally recorded by Barbra Streisand and Melissa Manchester.

“I think the music is therapeutic,” she said. “It keeps us all alive. Just look at our band leader. He’s 99 years old, but just give him the music and he’s off and running.”

Ferrari, who still drives a car, is both a teacher and an inspiration to younger band members.

“He’s got 100 years of wisdom. I’d say about 25 percent of what he knows rubs off on me just from being in the band,” said trumpet player Mark Figueroa, 60, of Bellmore. “This was his music as a child, and he teaches me what he knows from that era.”

Figueroa joined the band four years ago, replacing a player who left . With players in the 80s and 90s, “band members come and go pretty quickly,” Figueroa said.

When band members die, they can live on through the Golden Tones’ charitable efforts.

After one of the saxophone players died in 2016, his family offered his collection of flutes, clarinets and saxophones to the band. Hausen said the family suggested selling them or giving them to charity.

The instruments were donated to the Ellis Marsalis Center for Music in New Orleans, a music education program for underserved children ages 7 to 18 who live in the 9th Ward and New Orleans East communities.

Dance with the Tones

WHAT All ages are welcome to sing and dance along with the 21-piece Golden Tone Orchestra.

WHEN | WHERE 10 a.m. on the first Wednesday of the month at Merrick Road Park Golf Course Ballroom, 2550 Clubhouse Rd., Merrick; free

2:17 LI catering hall becomes restaurant with private cabanas
2:17 After decades in hospitality, owner turns LI event space into eatery
Last chance this season to let Fido play on Fire Island beaches
Join a live or virtual 4-mile race, more things to do this weekend on LI
New Greek eatery opens in Glen Cove
1:56 You might need a dip clip: Test-driving 7 gadgets for eating in the car
Didn’t find what you were looking for?