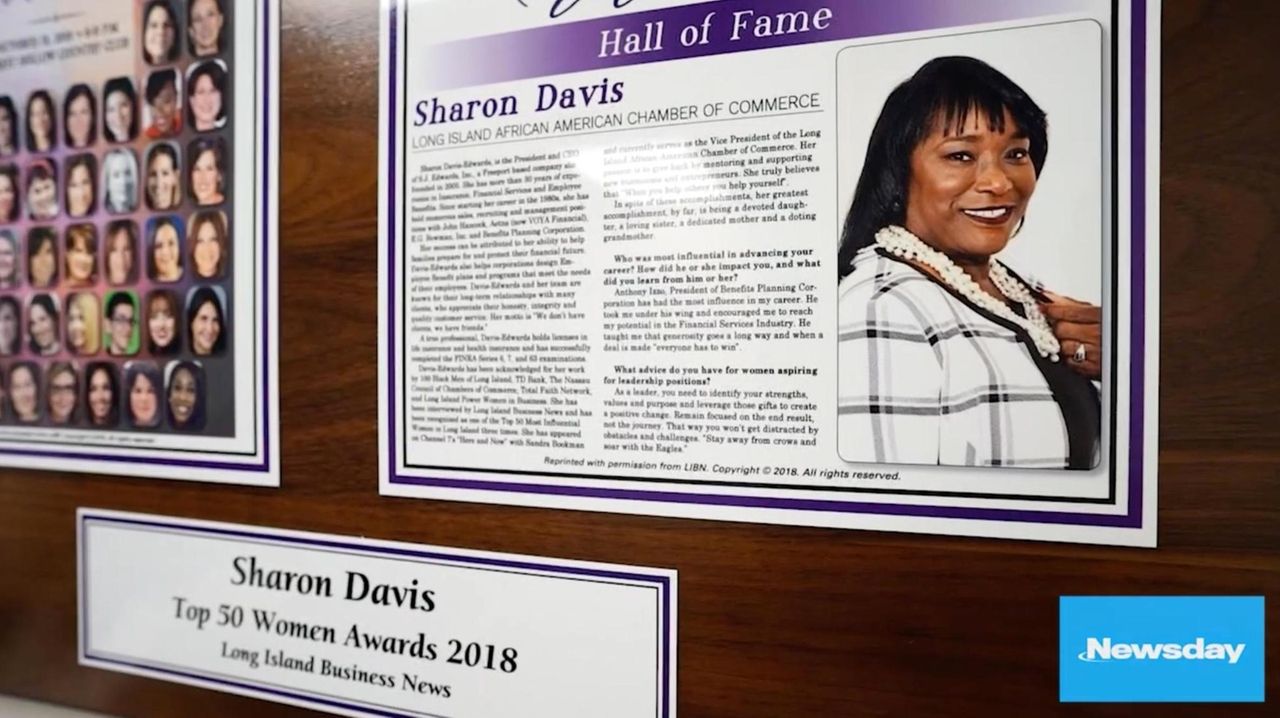 Sharon Davis, 67, of Merrick started a successful company after divorcing her husband of 30 years. Though late-in-life splits can be more complicated, they're on the rise and can lead to greater fulfillment in life. Credit: Newsday / Chris Ware

You might say Joey Bowen fell in love for the first time when she was 7 years old. The object of her affection? A white handbag festooned with colorful flowers that she spotted while shopping at a church bazaar with her mother and grandmother.

Now 54, Bowen has had a thing for stylish handbags ever since — and for years wanted to start a business designing her own. But it wasn’t until she got divorced in 2019, after 20 years of marriage, that she felt free to make that dream come true.

In the spring of 2019, the Bethpage mother of two founded and became creative director of Be Clear Handbags, which features "designer-inspired" looks much like styles from Chanel, Gucci, Dior, Valentino, Hermes and Kate Spade, but that are transparent, making them easier to use at stadiums, concert halls and sporting events that require see-through bags for security reasons.

"I was a jewelry designer — I always loved accessories," Bowen said. She had thought of starting a bag company when she was married, but her husband "wasn’t on board with it."

She’s become a wholesaler for boutiques on Long Island and beyond, including Let’s Bag It in Merrick, Ava’s & Around Again in Sag Harbor, Katherine Tess in Roslyn, Pink Flamingo Boutique in Naples, Florida, as well as stores in New Jersey, Oklahoma, Pennsylvania and Rhode Island; and she sells her bags online. "I’ve completely fallen in love with what I do," Bowen added. "I’m so blessed."

Like Bill and Melinda Gates, former Vice President Al Gore and his wife, Tipper, and "Long Island Medium" stars Theresa and Larry Caputo, Bowen is among the many people getting divorced or thinking about it at 50 and older. According to the Pew Research Center, the age group doubled its divorce rate between 1990 and 2010, led by baby boomers, with that rate currently remaining steady. And while many of those involved in the "gray divorce" trend say it can be challenging, they add that life on the other side that can be happy, inspiring and rewarding.

"I’ve seen more and more people, 50-and-over couples, getting divorced nowadays," said David Badanes, a Northport marital and family law attorney. "The stigma of divorce is no longer really there." He added that with no-fault divorces in New York, couples don’t have to give a reason for their breakup.

Badanes said older prospective divorcees seeing their peers part from their spouses later in life can give them confidence that after they leave a marriage life can successfully go on. "They may see friends or people they know meet another person or get happier."

Louis F. Simonetti Jr., founder of Simonetti & Associates of Syosset and Water Mill, says times have changed for couples feeling they need to stay married for better or worse after they reach a certain age.

"One of the things that has happened is that once upon a time it was typical for a person who came in [for a divorce] to be 40 years old, but the practice has changed. Octogenarians are getting divorced," Simonetti said. "People, if they’re not happy, are moving on." He added, "It’s human nature that we all have a fear of the unknown, we hate change, but once they dip their toe in the water, they can find out that everything will be OK."

Chana Pfeifer, a psychotherapist specializing in couples and relationship counseling with offices in West Hempstead and Cedarhurst, said the newest reason some in the 50-plus age group have decided to split is the pandemic.

"The pandemic made couples of all ages get closer or exacerbated their misery," said Pfeifer. "It has really forced people to examine their relationships and what they value."

For someone older who has been married for decades and decades, Pfeifer said there "may be more baggage like kids, finances and history" that has to be taken in account when deciding to divorce a longtime spouse, but she said those things can be worked out.

"One of the reasons couples get divorced later in life is they want to put off the divorce until their children finish high school," said Neil S. Grossman, a Dix Hills clinical and forensic psychologist who works largely on divorce issues. "The children then are going off to college and are more independent, and they’re trying not to upset the kids." When a couple has older children, he said, there are also no custody battles to fear.

However, Grossman said a "main reason" he sees women get divorced at 50 and over today is that many were breadwinners in their marriages and they can support themselves.

"There may be a woman who’s a physician married to a schoolteacher," Grossman said. "The main factor is women having jobs."

Westbury matrimonial attorney Harriet M. Steinberg added, "There’s a real cultural shift that happened. The 50-year-old woman was raised on different thinking [than in the past]. She was raised to think more about developing her own potential and going out to work and raising a family."

Sharon Davis, 67, is president and CEO of a health insurance, employee benefits and retirement plans company in Merrick that she started in 2005. She got divorced in 2014 after being married for 30 years. Before owning her business, Davis worked as a telemarketer, vice president of an employee benefits company and an annuity specialist for John Hancock.

Davis said in her life as a single woman, everything has nicely fallen into place.

As part of the divorce settlement, Davis was given the Freeport house that she had shared with her husband. She lived there for a while with her daughter and her family, including Davis’ son-in-law and two granddaughters; then when they bought a house in Merrick, Davis moved in with them.

Davis says living with family after divorce has taken the focus away from thoughts relating to her breakup — though she’s not ready to enter into another committed romantic relationship.

"It wasn’t a bad relationship, so I could have lived with him [her husband] forever, but I wasn’t happy, and he wasn’t happy," Davis explained. So, she said, the question had to be asked, " ‘What are we doing here?’ " She said, "There were 25 blissful years, then the last five we kind of grew apart."

Davis said everyone in and outside of the family thought her marriage was happy all the way to the end and said that if the divorce had upset her daughter, she wouldn’t have gone through with it.

"I would have stayed if it meant that much to her, but she wanted her mother to be happy," Davis said, adding that there were other things to consider in deciding to dissolve the marriage. "I had never lived alone."

Davis said despite being capable of earning her own good living, she still wondered whether she could live the quality of life she was accustomed to if she had to go it alone.

"My 401(k) provided a cushion for when expenses and emergencies came up" and her business has worked out well. "Owning a business is a passion of mine," she added. "I always wanted to leave a legacy and do things my way."

Arun Konanur, 55, was only approaching 50 when he got divorced at 48 after getting married in 1999. Still, he said, he was concerned about what the future might hold. A native of Canada, Konanur lived in Northport for 14 years while married and afterward moved back to Canada, where he resides in Ontario.

While living on Long Island Konanur owned an IT firm in Manhattan for 20 years and he continues to do some IT work, though he’s added genealogist to his resume.

Konanur came to New York in 1986 to attend the Manhattan School of Music, where he majored in Classical music composition and then went on to get his masters from Columbia University. He said he strayed from a musical path when in 1993 when he became a full-time consultant for Philip Morris USA, writing inventory management systems. He had various jobs, then started his own IT company in 1997.

Things on the job front didn’t initially work out as planned after his divorce, but all is fine now, Konanur said.

"You’re 50 but you’re not ready to retire — it took a while to figure things out," Konanur said. "Initially when I moved here [to Canada] I thought I’d find IT work that would support the kind of business and fees in Manhattan, but that never materialized."

When IT work didn’t pan out, Konanur made a business out of his genealogy hobby, creating a research model that he believes he can patent. His love life looks good, too.

"I reconnected with someone I had dated in high school and graduate school, and we’ve been together the last seven or eight years," Konanur said.

Bowen said she's hopeful she'll find someone new to share her life with.

"I’m not 30 years or 40 years old, so at first I was thinking, ‘Oh Gosh!’ when pondering trying to find a new partner. I hadn’t been dating since I was in my 20s, but I put myself out there and got online to see if someone wanted to talk to me or meet me for a drink."

"I never put pressure on myself. I always think of it as meeting a new friend," Bowen said of first dates. "I’ve met some amazing men who have amazing lives and interesting businesses — I’ve gotten some advice from them."

Pfeifer said it’s important that those who divorce later in life remain open to the idea that a fulfilling and wonderful life could be ahead.

"It can be an incredible beginning of a new chapter," Pfeifer said. "We only have one life and deserve to live it the best it can be."

Louis F. Simonetti Jr., founder of Simonetti & Associates of Syosset and Water Mill, said there is wide variety of reasons behind the increase in divorce among the 50-plus crowd, including:

Delayed divorce: Often couples choose to remain married until their children are old enough to be on their own or can further understand — and be less affected — by the divorce.

They’re empty nesters: Older couples often find that once their adult children are all officially moved out, there isn’t enough holding the marriage together.

Retirement: When one or both individuals start retirement, there are lifestyle changes that can cause conflicts within the marriage.

Longer life expectancies: With people living longer, the idea of remaining in an unfulfilling and unhappy relationship “forever” causes more couples to turn to divorce.

Women being more economically stable: With more women working, they are no longer in need of a marriage to support them.

Less stigma around divorce: Especially within religion, the stigma and negativity surrounding divorce are not as prevalent as in the past.

Prevalence of online dating: The ease of connecting online has given hope to older divorcees that they can more easily find a new and better relationship.