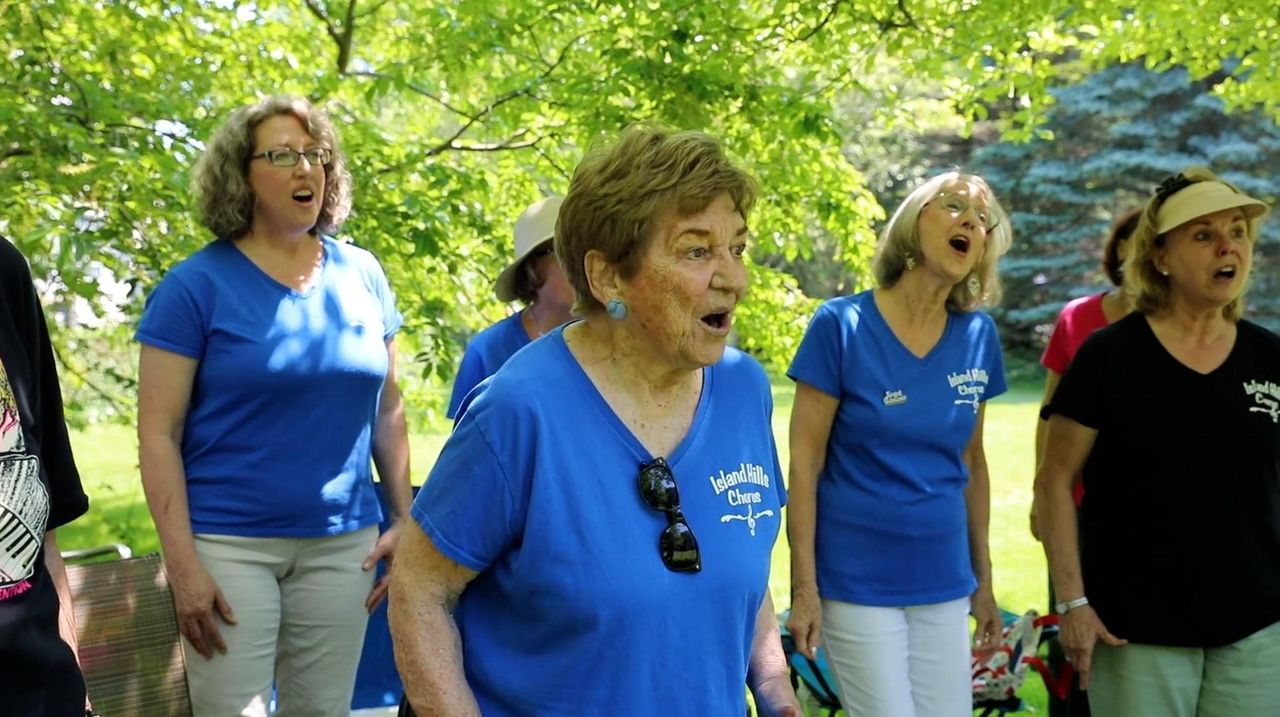 The members of Island Hills Chorus did not enjoy social distancing and meeting remotely during the pandemic. On June 6, they spoke about how it feels to be together again for in-person rehearsals and performances. Credit: Morgan Campbell

About 25 women from the Island Hills Chorus gathered June 6 in a large backyard in Sayville, sitting on folding chairs beneath the shade of trees. When it came time to sing, they stood as Laura Riffaud conducted, her hands moving as if summoning the song from thin air.

The rehearsal, including such songs as "Blue Skies" and "You’ll Never Walk Alone" along with "That’s What Friends Are For," was a big moment in the group’s pandemic journey. After singing on Zoom for a year, this was the first time many were harmonizing side-by-side.

It was as if they had each been carrying a piece of the puzzle during the pandemic — and could finally put it all together.

"Everyone has been singing on Zoom in mute. You only hear yourself," said Julie DeBragga, 65, of Islip. "It’s a real treat for us to hear the four parts of harmony come together."

The sounds of music

Long Island is filled with choruses, including members of the Sweet Adelines International, which has about 21,000 female singers around the globe. Sweet Adeline choruses on Long Island include Island Hills, founded in 1964, Twin County Chorus, Long Island Sound Chorus, Greater Nassau Chorus and Heart of Long Island Chorus.

"I love singing and hearing the beautiful harmonies," said Kara Dashnaw, 52, of Centereach, Island Hills' bass section leader. "I like the old songs, the new, the ballads, the 'up' tunes. I really love patriotic songs. They bring out emotion in me."

While choruses are about coming together to create one sound from many voices, Island Hills members — about 40 between the ages of 45 and 89 — had to figure out how to survive and support one another while apart. Complicating matters further, the group’s director of nearly a decade left when COVID-19 struck.

"It’s been hard to keep the ladies all together and motivated," DeBragga said. "Some have been truly depressed."

The group, which had traveled together to Washington, D.C., Boston and Los Angeles as well as performed at Radio City Music Hall, Madison Square Garden and the United Nations, had rehearsals and gigs lined up before the pandemic arrived. Suddenly, something they loved doing had become dangerous.

While COVID-19 changed nearly everything, choruses, in particular, found their prime activity problematic. "Singing was dangerous. It’s a superspreader," said Madeline Nelson, 75, of Northport. "You’re expelling a lot of germs."

After a Feb. 23, 2020, show at Sayville Library, the group was set to perform St. Patrick’s Day at the CM Performing Arts Center in Oakdale. Of course, shows were canceled, and in-person rehearsals stopped.

"We couldn’t sing together. That was the hardest thing," said Dashnaw, who retired after about 20 years in her family’s audiovisual business in Ronkonkoma.

"I joined a couple of months before the pandemic hit," said Cindy Simon, 52, of Hauppauge, education liaison with Sweet Adeline groups who owns SignWave in Islandia. "It was challenging."

Simon said even before the pandemic she liked the "feminine energy" of the group, where sound and spirit mesh. "That was one of the things that drew me to be in this chorus."

Although choirs may use sheet music, Island Hills and similar choruses typically learn songs by heart, requiring robust memories and that members rehearse on their own. "We don’t look at our music when we sing," said Nelson, an Island Hills member for about 30 years. "It keeps your brain young."

While choruses are about singing, Island Hills members pivoted to supporting one another during the pandemic, making even emotional survival the central goal.

"Once COVID hit, this group really coalesced around the more vulnerable people in the group," Simon said.

Margo Blatt, 59, of Dix Hills volunteered at the Long Island Cares — The Harry Chapin Food Bank. Simon sewed music-themed face masks, which she donated to chorus members and others in need. Sally Hausner, 83, of Ronkonkoma crocheted hats for homeless children, while Marianne Fulfaro of Sayville crocheted blankets for senior citizens. And DeBragga picked up and delivered masks that Simon made.

"It was early, and it was hard to get your hands on them [masks]. Homemade was about all you could get," Simon said. "I saw a lot of strength and cooperation."

In need of a new leader, the group decided on co-directors, since the job, especially during the pandemic, was more complicated. Barbara Festa, 70, of Patchogue and Laura Riffaud, both longtime members who had each been assistant directors, became co-directors.

"My co-director has been one of my best friends for the past 15 years," Festa said of Riffaud. "That was the first thing we loved about the job."

Riffaud and Festa also sang together in quartets, starting with Rhythm and Rhyme and then Savoir Faire. "We hit it off friendship-wise," said Riffaud, who enjoys saying, "Barbara Festa, she’s the besta."

At a time when business as usual was impossible, co-directors proved a perfect solution. "We now have twice the creativity and energy," DeBragga said. "Their dedication to our group is inspiring. Together we feel we are all moving forward in a positive direction."

Festa’s decades of teaching, primarily middle school science in the Brentwood school district, came in handy. "I really love the fact that, as the director along with Laura, the two of us can teach about the art of barbershop singing," Festa said. "I love to talk and instruct."

"You have to know where to breathe," added Riffaud, who has taken voice, piano and music theory lessons, highlighting a technical approach to the craft. "There are designated spots to breathe."

While technology can be a useful tool, the chorus’ members, many in their 70s, sometimes struggled.

"Shortly after everything shut down, my friend Madeline calls me and says, ‘You have to learn about Zoom,’" Festa explained. "I said, ‘What is Zoom?’"

Kara Dashnaw took the lead, showing members one-one-one how to use Zoom and referring them to YouTube videos for more information. "Kara has been our go-to person for any questions about technology," Riffaud said.

In addition, the chorus found that Zoom, created for meetings not singing, required it to adapt its rehearsal regimen and method.

"Since it’s very difficult to sing ‘in sync’ in a Zoom meeting; many rehearsals involved asking members to sing individually in order to be coached," DeBragga said. "As a result, many of our members gained a new confidence in their own singing ability."

Another benefit: Members gathered via Zoom even when they traveled, including a long trip Riffaud took to South Carolina, Florida and Louisiana.

While "Zooming" isn’t the same as being together, Riffaud said of seeing her friends in its online "boxes," "It’s a beautiful thing."

"I always got to a place where I could Zoom so I wouldn’t miss any rehearsals," Riffaud said. "When I came back on the final leg of the trip, I said I’m so happy to be coming back to this group of loving women."

The group also socialized and had guest lecturers on Zoom, including having a virtual holiday party in December 2020. Coaches at online sessions taught vocal exercises, the importance of singing in sync and how to convey lyrics’ meaning.

"Because all of this was done on Zoom, we had access to coaching from everywhere," DeBragga said. "No travel expenses involved."

When a member got sick, they sent her grandson a digital file of a quartet singing "You’ll Never Walk Alone," which they learned during the pandemic, to share with the woman.

"I feel we gave her some joy at the end of her life," Nelson said of the woman, who died soon after, though not of COVID-19.

Margaret Savarese, 70, of Smithtown said she became a better singer, taking lessons on Zoom twice a month in addition to her Island Hills sessions. "I took vocal instruction, which I was happy with," she said. "We’ve learned a lot about note accuracy and pitch by listening and their teaching."

Festa said Zoom fatigue eventually set in, leading to a chorus of concern. "Please don’t ask me to go to another rehearsal where I have to look at people in boxes," she said people began to say.

After the Centers for Disease Control and Prevention advised that it was safe for vaccinated people to sing together with masks, the group had its first outdoor rehearsal on a Tuesday in mid-April. That was followed by another in-person rehearsal on May 15 and the larger, full-fledged (and first for many) rehearsal on June 6 in Marianne Fulfaro’s Sayville yard.

"There’s a psychological component," Festa said, noting they initially wore masks. "Everybody has their own timeline of how they’re going to let go of that fear."

Another musical milestone was when 11 members — all dressed in red, white and blue — sang at the Port Jefferson Yacht Club on May 23, jettisoning masks for the first performance since the pandemic.

"I haven’t been able to hug people, to touch people," Nelson said. "Suddenly these women I’ve seen in little boxes — we were there, talking to each other and harmonizing. It was extremely joyous."

When they sang "When you walk through a storm," the first line in "You’ll Never Walk Alone," it was an emotional moment, Nelson said. "You almost felt like crying. Here we are, and we walked through a storm to get to the point we are. It was very joyous."

They have since begun rehearsing in a vacant store at the Westfield South Shore mall in Bay Shore donated to the Islip Arts Council by the mall’s management.

The chorus is slated to perform Aug 4 in Huntington (see box). And they are scheduling other gigs.

"We’re emerging from this time," Nelson said. "This group is there for each other. It’s a very loving group. I stay in it as much for my friends as the music."

Take a little trip to Egypt at new Selden market
3:36
10 events, things to do this weekend on Long Island
LI drive-in, outdoor movie and concert schedule for summer
High-end, waterfront restaurant opens in Port Jefferson
New LI dessert spot serves coffee imprinted with your photo
3 LI restaurants to try this weekend
Didn’t find what you were looking for?