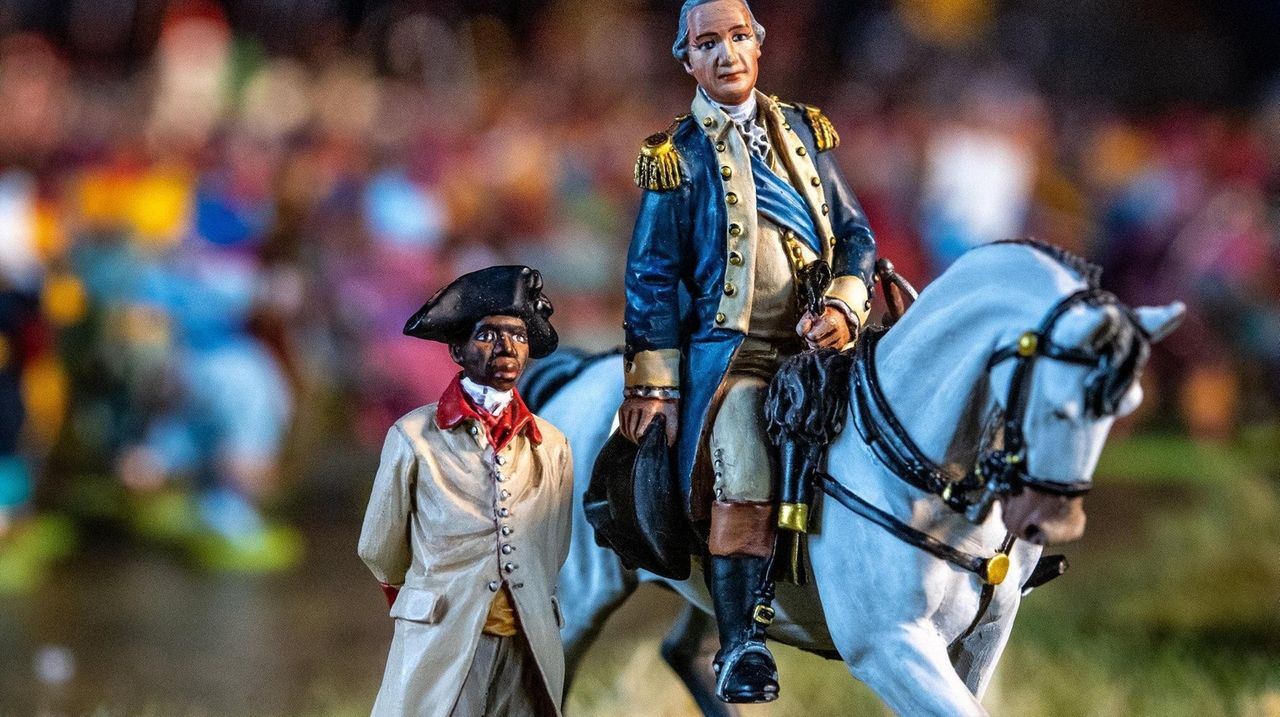 Richard Schuster played with toy soldiers when he was a kid, but it wasn't until retirement that he began creating his elaborate historical dioramas. Pikes, crossbows, broadswords, muskets, artillery and even helicopters — hanging from the ceiling — merge into a technological timeline of slaughter in his Syosset home. Credit: Newsday / J. Conrad Williams, Jr.

In the second-floor "Soldier Room" of Richard Schuster’s Syosset home, a miniature parade of human aggression and conflict marches through the ages: American minutemen fire on British Redcoats, Roman legionnaires clash with Carthaginians; British Imperial soldiers aim their rifles at charging Zulu warriors; a Saxon shield wall forms near the motorized vanguard of a German Panzer unit. Pikes, crossbows, broadswords, muskets, artillery and even helicopters — hanging from the ceiling — merge into a technological timeline of slaughter.

Schuster collected and hand-painted the soldiers in this cavalcade of combat that unfolds across a 5-by-9-foot tabletop in the center of the room — with separate skirmishes continuing on about 100 shelves that line the walls. He has meticulously researched the uniforms of the combatants, the tactics of the generals, the deployment of the armies at certain moments in specific engagements, from Agincourt to the Ardennes, and from the Punic Wars to Vietnam — and re-created them here.

Yet as he gazes over the tables and shelves crammed with an estimated 20,000 individual soldiers, most of them tin, representing virtually every conflict since the first cave man bonked his neighbor on the head with a mastodon bone, the slim, self-effacing Schuster hardly looks like a bloodthirsty militarist. In fact, he doesn’t even look like someone who would raise his voice in a disagreement over a restaurant bill.

"I had a colleague and his wife visiting once," he recalled to a visitor. "She looked around, then turned to me and said, ‘Are you a war monger?’ "

Schuster chuckled behind his mask at the memory. "I told her 'No, I love history; I love the art of the toy soldier, and I do think it’s a great vehicle for teaching history.’ "

To that end, Schuster has created dioramas for such organizations as the New-York Historical Society, Raynham Hall Museum in Oyster Bay and the Cold Spring Harbor Library, where his exhibits have spotlighted various chapters of Long Island’s history.

"He’s a wonderful model- and diorama-maker," said Gerhard Schlanzky, director of exhibitions for the New-York Historical Society, which over the past five years has commissioned Schuster to recreate the Battle of Brooklyn in 1776; the encampment of George Washington’s Continental Army outside New York City during 1782, the last year of the Revolution; and — as the centerpiece of the society's 2017 exhibit on World War I — a tableau depicting American doughboys in action in France.

These large-scale layouts involved hundreds of individual soldiers as well as buildings and terrain that Schuster constructs.

"He brings all these resources together to create these wonderful, immersive displays," said Schlanzky.

And to think, it all started in the backyard of his parents’ Great Neck home.

Clockwise from top: The 54th Massachusetts African American Regiment during the Civil War in 1863. Chinese warriors from the Qing Dynasty in the 18th and 19th centuries. A replica of Brooklyn's Cortelyou, called the “Old Stone House,” in the Battle of Long Island in 1776; the house was Incorporated into a diorama of the battle that was originally displayed at the New-York Historical Society. | Newsday Photos / J. Conrad Williams Jr.

Like a lot of boys on Long Island in the ’50s and ’60s, Schuster grew up playing with toy soldiers. "We had these little green army men and plastic tanks," he recalled. "And we'd set up battles in the backyard."

Unlike like a lot of those boys, however, Schuster, now 72, created a second, retirement career around his childhood pastime.

The details in these layouts are stunning, as he works hard to ensure accuracy. "I'm good at researching uniforms and details," Schuster pointed out, "but I don't consider myself an artist."

A modest assessment, considering the exquisite nature of his warrior-worlds-in-miniature, not to mention their use by serious historical organizations. In fact, Schuster's re-creation of George Washington's headquarters tent, which he used in one of his dioramas for the New-York Historical Society, was considered so accurate that the Museum of the American Revolution in Philadelphia plans to display it — alongside the actual tent.

For Schuster, it's a labor of love — although there were times he kept his passion for his collection under wraps — along with the soldiers themselves. "I can admit that I do this now," he said. "But for a while, I was embarrassed by my hobby," he explained. While he was a student at The George Washington University and as he started his career in the electronics industry, the soldiers were demobilized. "I kept them in boxes in a closet in my parent’s house in Great Neck," he said.

Years later, in 2011, after selling the Melville-based electronics business he cofounded in 1982, Schuster was looking for something to do. "My wife said to me, 'look you gotta keep busy,’ " he recalled. " 'I'm not making you lunch every day.' "

Schuster took Madeline's half-joking words to heart. He became more active in educational charities, working with Big Brother and Big Sister, Junior Achievement and the W!SE Institute, a college and career-readiness initiative for students in New York City high schools. Schuster, who has won awards for these volunteer efforts, enjoys helping young people prepare for their futures. But he also began thinking of the past and how much he loved recreating it through his toy soldiers. Would this be something that might help people better learn about history?

"I decided to send out emails to museums, libraries and schools," he said. "I basically said, 'this is what I can do, and I don't charge anything.' I just ask for the space to exhibit my work."

The Cold Spring Harbor Library responded, and Schuster soon began creating what is now a series of rotating exhibits that are displayed on the second floor of the library. For these dioramas, Schuster has gone further afield than historical Long Island, or even great battles. "I have one now on the Plains Indians," he says. "I did another on ancient Egypt."

Clockwise from top: Richard Schuster's shelves are filled with thousands of miniature soldiers and other historical diorama accessories. A detail of a diorama featuring George Washington and his servant William Lee. A Northeastern Native American village, circa 1750, with wigwams and longhouses. | Newsday Photos / J. Conrad Williams Jr.

Schuster buys soldiers from various manufacturers and individual makers, but to ensure the period authenticity of the uniforms, he paints the soldiers himself, working at a kitchen table in his home. To mold the terrain, he paints and spackles plastic-foam boards, often using materials purchased from companies that specialize in model trains. And he'll innovate: For example, to simulate the marshes of Brooklyn, circa 1776, he used pieces cut from carpets.

His work is informed by intensive research — some of it done in his personal library of more than 500 books on military history, weapons and uniforms — and, he consults with hobbyists and historians around the country to ensure accuracy.

When asked, Schuster said that based on his interaction with these other enthusiasts, he believes that his collection of toy soldiers is one of the largest in the country.

His models are typically 1/30 scale — meaning that a typical soldier stands about 21/2 inches tall. For his latest project — the recreation of the hamlet of Oyster Bay in 1777 (including the British fort that once commanded the hills overlooking the bay itself) that will be on display at Raynham Hall Museum later this spring — he is working in an even smaller scale in order to fit the entire area into the diorama. (Check the museum’s website, raynhamhallmuseum.org, for more information.)

Early in the process, he invited Claire Bellerjeau, director of education at Raynham Hall, to visit the Soldier Room. "It was one of the most magical experiences I can remember," said Bellerjeau. "I was not just enthralled to see the gift he was giving us, but I'm looking around this incredible space. One minute I'm in the time of the Aztecs, then I'm going to World War II, and then the Egyptians and ancient Romans. You felt like you were traveling through time."

Time is very much on Schuster's mind these days. Specifically, the question of what he will do with his vast collection when he's gone. His two adult children and four grandchildren can't be expected to turn their future homes into miniature military depots.

"It's something I've been thinking about at my age," he admitted. He hopes to donate as much as possible to museums and libraries. But while he contemplates the ultimate fate of his soldiery, new ideas percolate.

"I've always wanted to do a re-creation of the Battle of San Juan Hill," he said, referring to the famous engagement of the Spanish-American War in which Theodore Roosevelt gained national fame for leading the charge of his Rough Riders.

So, alongside the diminutive Confederates, cavaliers and centurions arrayed in the Soldier Room, expect a galloping, tiny Teddy to soon join his comrades-in-arms from across the centuries.