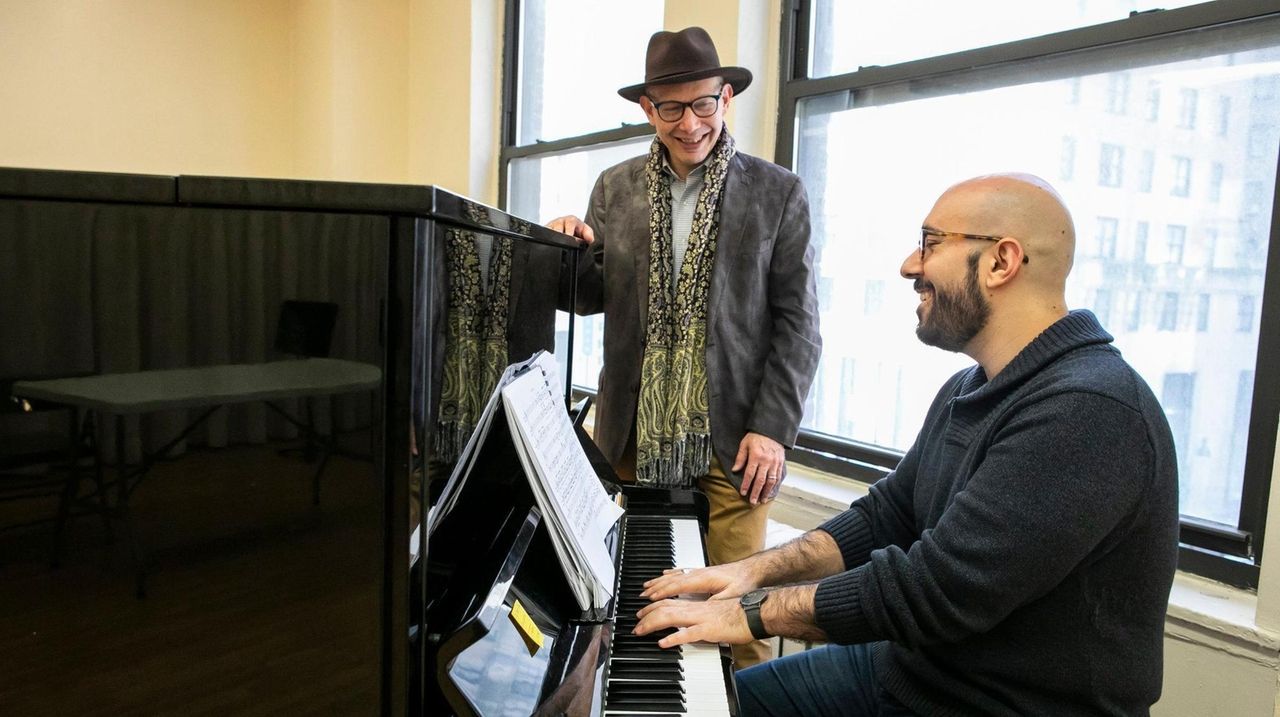 Ted Rosenthal, a musician and composer, has set the stories from letters he found in his attic to music in his jazz opera “Dear Erich,” which will be presented by the New York City Opera on Jan. 9, 10, 12 and 13 at the Museum of Jewish Heritage in lower Manhattan. Rosenthal talked about it on Dec. 20. Credit: Marisol Diaz-Gordon

For years, Ted Rosenthal was unaware of the family treasures that were tucked away in the attic of the Great Neck home where he grew up. It wasn’t until the death of his father, Erich, in 1995, and the ritual cleaning out of family belongings that he stumbled upon the boxes filled with more than 200 letters — all in German — addressed to his father in the United States between the spring of 1938 and November 1941.

“They were written by my grandmother, who had perished in the Holocaust, to my father who was able to come to this country through a fellowship he received to the University of Chicago,” said Rosenthal, 59.

Though the letters, which his father had organized chronologically, were intriguing, the boxes once again just sat — this time in the attic of Rosenthal’s residence in Scarsdale — for more than a decade afterward. Then eight years ago, Rosenthal received an invitation to the reopening of a small Jewish religious school that had been destroyed during World War II in his grandmother’s hometown of Bad Camberg, Germany. When he attended the event, he also brought some of the letters hoping they might pique the interest of the directors of the Bad Camberg Historical Society.

“They were interested and said this is the town’s history, this is your history, so they translated a few. It was amazing to hear the first few and get a window into my grandmother’s life. I received the translations of the first six, and they were so moving and so powerful,” said Rosenthal, who also lives part of the time in Manhattan. “I started to learn about the history of the family, which my father never talked about and which is typical of Holocaust survivors.”

Now Rosenthal, a musician and composer, has set the stories contained in those letters to music in his jazz opera “Dear Erich,” which will be presented by the New York City Opera from Jan. 9 to 13 at the Museum of Jewish Heritage in lower Manhattan.

Though he’s a classically trained pianist, Rosenthal’s claim to fame has been as a jazz musician who’s performed with legends including Gerry Mulligan and Wynton Marsalis.

“After this profound experience of learning about this family that I really didn’t know about, I started to think this could be a really dramatic musical work,” he said. “This story of coming to America and the immigrant experience of finding a new world, a new life, a new wife and having to deal with what was happening to his family back home and the survivor guilt associated with not being able to help them is the essence of ‘Dear Erich.'"

A woman of letters

Rosenthal was thrilled when Peter Schmidt, a Bad Camberg-based historian who is featured in “Dear Erich,” agreed to translate the letters. Rosenthal, who spent many hours with Schmidt going through the letters, was immediately touched as he got to know his grandmother through her writing.

"You can see the bond that she has with my father and the love and support and the caring,” Rosenthal said. “She would be very low-key about the tough times they were having. Instead she would ask him about his health and how were his studies going.”

Several letters stand out and are featured prominently in “Dear Erich,” such as the one dated Nov. 14, 1938, a few days after Kristallnacht. During that cataclysmic event, also called Night of Broken Glass, Nazis torched and vandalized Jewish homes, schools and businesses. More than 30,000 Jewish men — including Rosenthal’s grandfather Theodor — were arrested and sent to concentration camps. In that letter, Herta Rosenthal tells Erich that his father “went away on a trip.” In a follow-up letter shortly after, she writes that Theodor has died.

“Learning of my grandfather dying in Kristallnacht — to this day it brings tears to my eyes,” Rosenthal said.

The incident also moved Brian James Myer, who plays Erich. “The story, being that it is true, makes it very touching and it’s so close to Ted personally,” said Myer, who lives in Philadelphia. “I can’t even imagine what it was like going through the writing process and having to deal with these events over and over again.”

While much of “Dear Erich,” deals with dark issues, the opera has its lighter moments, like when Erich discovers romance. There’s a lively scene that takes place in a Chicago nightclub where Erich gets introduced to jazz music by his girlfriend and future wife, Lili.

“Musically, it’s interesting and intricate because there are so many different styles and colors woven into one piece,” said Rachel Zatcoff, who plays Lili. “My character tries to get Erich to live and find joy in our relationship and the child we have.

"He’s having this survivor’s guilt. Trying to understand what that’s like and getting into that frame of mind is a challenge. My character is so joyful and represents hope and life. She ends the opera with a piece called ‘Always Believe.’"

Rosenthal’s collaborator on the libretto has been his wife of 15 years, a lawyer who also studied music at Harvard University.

“We discussed every nuance and saw eye to eye about how to present this story, both how to bring the magnitude of the 6 million to a personal level, our love for this country as expressed through the jazzy score, and also the important themes of standing guard against hate in our own times,” said Lesley Rosenthal, 53.

“The journey together has been intense, as his family members’ characters and the details of their suffering emerged."

In addition to providing a window into the relationship between Ted's father and grandmother, the letters offer glimpses into the personality of his grandfather, who wrote messages in some of the early letters.

Another revelation was learning that music was a part of his family’s history. “People would ask me ‘where does this musical talent come from?’ and I wouldn’t exactly know,” Rosenthal said. “In one of the letters there was a mention of a cousin, a sweet little girl who unfortunately perished. The letter mentioned how she was starting music lessons and that she was going to be playing the harmonium. I read that and was so touched that there really was some musical interest in the family.”

Among those who will be in attendance for the premiere of “Dear Erich” are a 96-year-old first cousin of Rosenthal’s mother and, of course, Peter Schmidt. One invitee who can’t make the show is U.S. Supreme Court Justice Ruth Bader Ginsburg, a friend who sent a gracious response: “Ted, I regret I cannot attend 'Dear Erich' as Court is in session but hope to attend a future performance.”

Rosenthal hopes that “Dear Erich” and his family’s plight will strike a universal chord.

“Even if they don’t have this specific story in their background, there are components of it they can relate to or be touched by,” Rosenthal said. “Toward the end, Herta says we must stand guard against hate. We are all living our lives, and now there are white supremacist parties and shootings that you wouldn’t have thought could be possible in 2018. Hopefully this will get people thinking about the ramifications of these issues and the many personal ways they can touch you.”