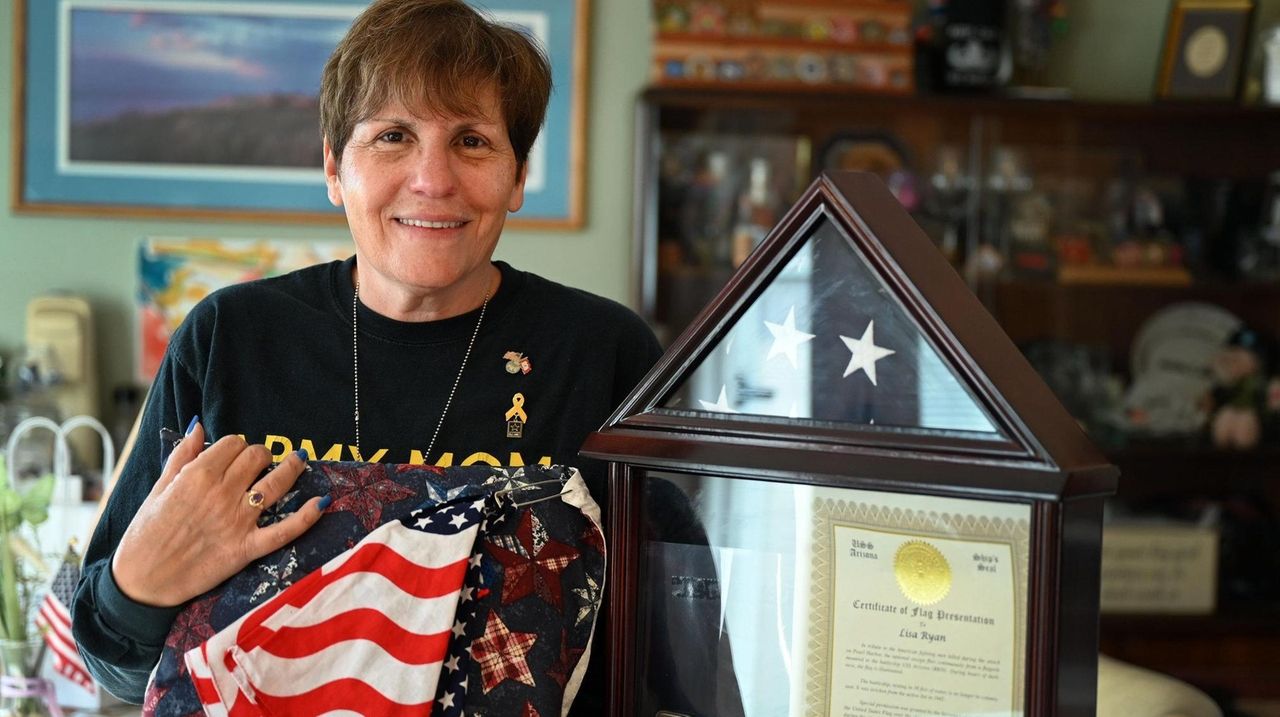 Lisa Ryan, president of the Nassau County chapter of Blue Star Mothers of America, credits the support group for mothers with children in active service in the U.S. military, with helping her get through her son’s deployments. Credit: Danielle Silverman

Back in 2011, Ellen Tashie Frisina endured a painful event in her life — her daughter’s move to the Bahamas.

“I cried and cried and cried,” recalled Frisina, 64, a Hofstra University public relations professor who lives in Bay Shore with her husband, Frank, 70, owner of a silk-screen printing firm in Lynbrook. “My only child was leaving home, and it was traumatic for me, but my husband thought it was what she needed to do.”

After being “excessed” (let go because of a funding shortfall) by the Long Island school district where she taught, their daughter, Jessica, relocated to the Bahamas for a teaching position. She also wanted to be close to her then-boyfriend, now husband, Erik Bruno, who at the time was working for his current employer, the United Bank of Switzerland, in Nassau, the Bahamas.

“My daughter went to the Bahamas, and 2½ hours later she was showing me her apartment on the computer,” Ellen said. That video chat also included plans for Ellen’s first visit a few weeks afterward.

Two years later, Jessica and Bruno married and moved to Zurich, Switzerland, for his job promotion.

While Frisina’s academic calendar enables her to make four annual trips to Zurich, her husband’s business limits his visits to twice a year. In between, FaceTime helps the family stay connected, including enabling the Frisinas to see their grandson, Luca, 18 months, grow and develop.

Throughout Long Island, many people are coping with the hundreds, if not thousands, of miles that separate them from their adult children and young grandchildren. And regardless of whether their offspring have crossed the country or globe for the love of their life, education, job opportunities, self-discovery or as members of the nation’s armed services, parents tend to experience a roller coaster of feelings — from sadness to pride.

Achieving emotional equilibrium generally involves pursuing volunteer activities, celebrating holidays with kids — either at their place or in the parents’ home — and staying in touch with texts, phone calls and such video chat apps as Skype, FaceTime and WhatsApp.

Knowing that their children are independent and happy also keeps parents emotionally afloat.

“Whatever else is going on, if your kids are good, you’re good,” said Baldwin resident Denise Hibbert, 55, whose daughter, Kat, 21, is a senior at Santa Clara University in California.

Long Islanders with adult children and grandchildren residing beyond the metropolitan region are part of a national trend. In AARP’s 2012 overall study of families that involved 2,261 parents who were 50 and older and that serves as the most recent on this subject, 71% had a child living within an hour’s drive. But 28% of the parents had their closest child living at least one hour away, and for 40%, grown kids were a drive of more than five hours away.

According to Amy Goyer, AARP family and caregiving expert, such physical distances impact parents in different ways, including worrying about who will care for them in the future and whether their grandchildren will know them.

“Technology’s not a substitute,” Goyer said, “although seeing grandparents on screen is a whole lot different than talking on the phone.” Many grandparents, she noted, strengthen their bonds with the grandkids by reading bedtime stories to them on FaceTime as well as taking them on vacations.

Although it’s not unusual for parents to entertain thoughts of moving near their children, such relocations are not necessarily a panacea, Goyer noted.

In the years ahead, adult children could move multiple times — causing aging parents to uproot their lives more often than they had ever anticipated or be left behind in communities without their kinfolk. And even when they live near their family, parents may be disappointed if their grown kids’ jobs and grandchildren’s schoolwork and recreational activities limit the amount of time that the generations actually spend together.

And while living far from family can be heart-wrenching, it also has pluses.

“Knowing Jessica is happy takes away the feeling of missing her,” Frank Frisina said, “and she has never been happier than she is now. So no matter where she would be living, I’m happy.”

Plus, Jessica’s Swiss locale has been a starting point for myriad multifamily journeys, including to Mallorca, Paris, Florence, Barcelona and Vienna, as well as to Beatles’ landmarks in Liverpool and London.

“There are things I have seen that I would never have if Jessica wasn’t living in Europe,” Ellen Frisina said. A family trip to Portugal is next on the agenda.

For other Long Islanders, an offspring’s decision to pursue a university education away from Long Island can also require an emotional adjustment.

Denise Hibbert vividly remembers how she felt leaving her daughter, Kat, when she started at Santa Clara University.

“I cried for the first hour of the flight back from California,” she said, noting that she wasn’t quite as emotional saying goodbye to her son, Desmond, now 26, because he was living closer to home — on LIU Brooklyn’s campus.

Since then, visiting Kat at school about three times a year, getting to know her friends and knowing when she will see Kat again — either at school or at home — have helped Denise keep her own emotions at bay.

A real estate agent, Hibbert also volunteers for Literacy Nassau, which helps children with learning challenges. “I just had to keep busy and dove into volunteer work,” she said.

In addition, Denise’s husband, Erick, 59, a banker, sees Kat during his frequent business trips to the West Coast.

Denise’s spirituality has brought her peace of mind, too. “I have faith that the Lord will watch over my family,” she said, “because that’s the only way I can rest my head at night and not worry about her.”

For her part, Kat, a computer science and engineering major, said she had long been “obsessed” with living in California, thanks to a childhood visit, movies and TV shows, and her father’s influence; he has had positive work and educational experiences there. Although she anticipates eventually returning to the East Coast to be near her family, a job offer could keep her in California indefinitely.

“I’ve built a community of friends that have become family out here in California,” Kat said, “and I’ve also worked here the past three summers so I’m very used to living here.”

From the get-go, Denise supported her daughter’s college decision, despite her own friends’ questions about why she would “allow” Kat to study so far away.

“I raised her to be independent and to pave her own way,” Denise recalled telling them. “And I’m going to be supportive in whatever direction she takes and let her spread her wings and fly.”

For Hicksville resident Lisa Ryan, 62, the high cost of travel and her significant other’s health issues make in-person visits to two of her three grown kids extremely difficult, if not impossible. Although Ryan often sees her daughter Jennifer, 33, a Melville resident, she rarely visits Jennifer’s twin sister, Kelly, who lives in North Carolina. And with her son (who is not named for security reasons) serving as a bomb technician in the U.S. Army, Ryan not only misses him but worries about his safety. She is ever thankful for her daughter-in-law’s phone calls, photos and Facebook postings.

Since signing up for active duty a decade ago, her son, 31, has served twice in Afghanistan, and his domestic postings have ranged from Fort Drum in upstate Watertown, a six-hour car ride from Long Island, to Hawaii, an 11-hour flight, which Ryan took once for a vacation and three times to babysit while her daughter-in-law was on the U.S. mainland for a training program.

Her son recently returned from an overseas deployment, joining his wife and their two kids, a daughter 6, and son, 10, in Fort Campbell, Kentucky. But, he has “re-upped” with the Army for another four years, said Ryan, a project manager for a fragrance company.

Her son’s desire to serve the country, she said, is deeply rooted in the impression the Sept. 11 terror attacks made on him when he was 13. Hailing from “a family of service” — with two uncles who were police officers at Ground Zero — her son volunteered with his family in bringing cases of water to the site and selling T-shirts to raise money for firefighters and their families.

While proud of her son’s enduring patriotism, Ryan credits Blue Star Mothers of America, a support group for mothers with children in active service in the U.S. military, with helping her get through his deployments. Ryan joined the organization in 2011, serving as president of its Nassau County chapter since 2016.

About six years ago, she summoned her strength to speak at a Blue Star gathering about an unnerving phone call she had received from her son; he told her that he had been wounded with shrapnel during a bomb detonation.

In response, the members told Ryan, “‘Your son had been hurt, but he called you. There was no knock on the door’” — the standard precursor to the Army personally delivering news and condolences after a loved one’s untimely death.

“The group literally saved me from losing my mind,” Ryan said.

Despite the many miles that can separate parents and grandparents from their families, there are ways to make the distances easier to bear for all parties, according to Long Islanders whose offspring live far beyond the region and Amy Goyer, AARP family and caregiving expert.

Here are their suggestions:

Always have a date on the calendar for your next visit together.

Try not to cry when saying goodbye.

Simple egg frittata recipe with vegetables
Things to do this Memorial Day weekend on LI
Try something new: Recent LI restaurant openings
Explore the Fire Island Lighthouse, more things to do this weekend
LI drive-in movie, concert schedule for the spring and summer
Top BBQ spot opens 2nd location, in Huntington Station
Didn’t find what you were looking for?