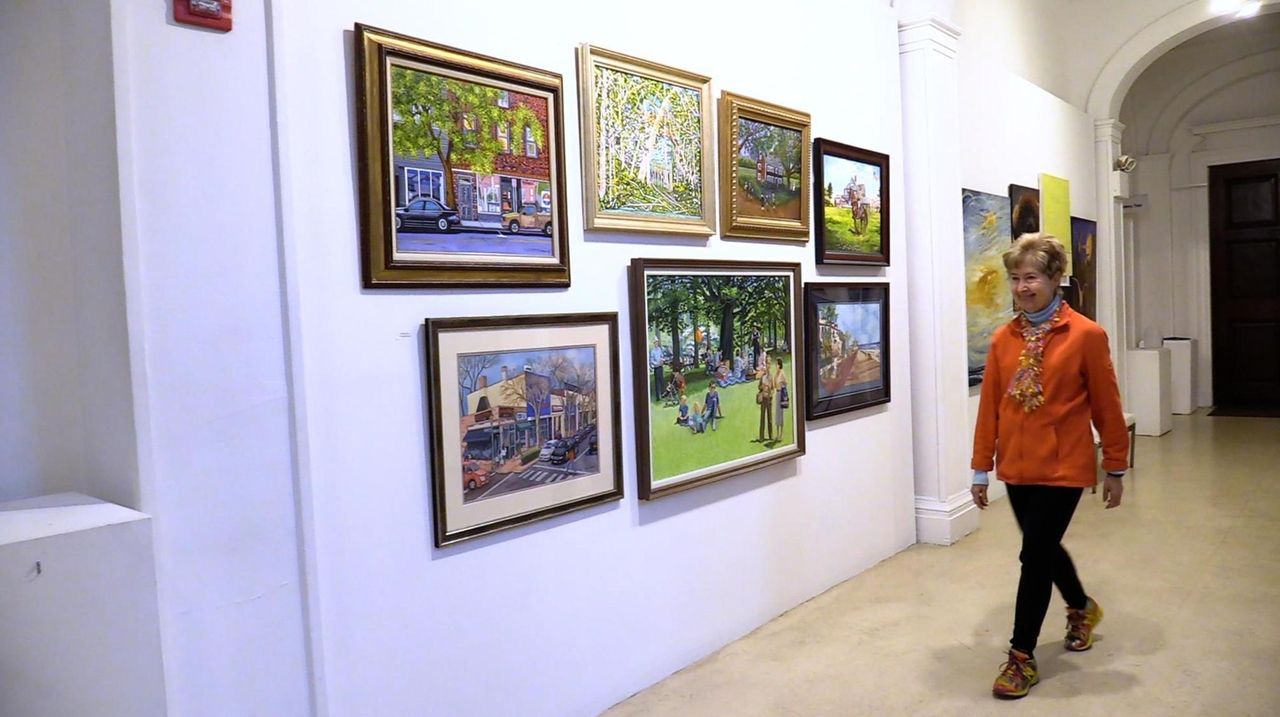 More than 140 artists have contributed to the Islip Art Museum’s “Art at 50 Plus” exhibit, a showcase for artists over 50 to demonstrate how Long Island has inspired them to create. On Nov. 27, Islip Council of the Arts artist-curator Holly Gordon called it, "...the most explosive exhibit the Islip Art Museum has ever mounted." Credit: Heather Walsh

“You can’t overdose on it. You do not need a prescription. It’s a very positive, powerful thing,” said Gordon, curator of “Art at 50-Plus,” an exhibit running from Dec. 6 to Jan. 15 at the Islip Art Museum. The theme of the art show, being done in collaboration with AARP, is “Life on Long Island — What It Means to Me.”

Entrants were invited to create scenes depicting everything from landscapes to laundromats that captured their imaginations. Gordon expected to get about 50 entries — instead she received submissions from more than 200 artists. Of that total, more than 140 artists were chosen.

“Society has a way of compartmentalizing,” Gordon said. “We think seniors are incontinent, have dementia, Alzheimer’s, but they’re filled with a verve and vitality that belies the physical and biological deterioration. That is what this exhibition is going to shout from the rooftops.”

Here are some of the artists ranging from their 50s to their 90s whose works are among the highlights of the exhibit. They also prove Gordon’s point that “seniors are society’s silent asset.”

Art comes naturally to Abrams, whose talents for painting and nature photography are in her family's genes: Her mother, uncle and great-aunt were all artists, along with her brother, Karl Hasselriis, 68, of St. James, whose colored-pencil drawing "Magical Mushrooms" is also in the exhibit.

"I try to keep up the tradition," Abrams said.

Though Abrams ran a videography business for 30 years, she dabbled in watercolors, acrylics and pastels. Since 2011, oil painting has been her preferred medium, but when she doesn't have a brush in her hands, she usually has a camera.

Her exhibit entry is a photograph taken with her cellphone of the Great South Bay on a frigid day in February. "I have all kinds of Canon cameras and have all kinds of lenses, from 24 mm to 600 mm," she said. "That day on the bay I wanted to take pictures of that beautiful blue ice. The best camera is the one that you have with you, and that's the one I had."

Guarino worked for many years as a commercial graphic designer. Then about 10 years ago, she picked up a brush for the first time since she was a kid when she was asked to do demos for art groups. That led to her second act: teaching watercolor at the Art League of Long Island in Dix Hills.

"Most of my students are retired and are finally getting around to doing what they’ve been waiting to do their whole lives," she said. "I took a whole group of artists to Tuscany, and we painted the landscape there."

Watercolor is Guarino's preferred medium, and she's fearless in her approach. "People are timid and apprehensive about watercolor because they feel they can’t correct it, but I have so many ways to correct it," she said.

A photo of a grist mill taken by a student inspired her entry, especially when she saw how the light played off the building."I loved the way the shadows were cast on the side of the building and how the fence cast these long cool afternoon shadows," she said. "The shapes of the shadows and the light hitting spoke so obviously to me that this was something that needed to be painted."

ENTRY "Simon at the Bluffs"

Schram, who retired this year from his job as vice president of specialty chemical company Rohm and Haas, didn't begin painting until 2008 after meeting watercolor artist Ward Hooper painting in a neighborhood park. He joined Hooper's weekly class at the Art League of Long Island, which led to him to study oil painting.

"Painting is much more than a hobby for me now, it's my passion. I paint most evenings at home, and when not painting I’m reading about art, out taking photo references or trying to decide what to paint," he said.

"Simon at the Bluffs" is a tribute to his beloved dog, Simon, who died last year. The Kings Park bluffs, overlooking Long Island Sound, were Simon's favorite place. "Simon was an incredibly smart and gentle 75-pound goldendoodle. He was the first therapy dog at Huntington Hospital, where he volunteered every week for 10 years."

The painting also fits in with Schram's mission for his art, he said: "I try to tell stories with my paintings. … Painting is not only cathartic but a pursuit based in meaning and purpose for me, and art keeps my brain functioning."

ENTRIES "Bayard Cutting Arboretum," " A Walk in My Spring Garden"

From the first time Solomon picked up a pencil, she fell in love with drawing. "I've been painting since I was a little girl," she said. "It's all I ever wanted to do, and I knew from the beginning that was going to be my profession."

Her works have been exhibited in galleries throughout the world as well as closer to home (Islip Art Museum and at Able Fine Art Gallery in Manhattan). Long Island has been a wellspring of inspiration.

"LI is so beautiful — the parks, the arboretums, the beaches. I take my pencils and pens with me and bring my sketchbook along, and do drawings and sketches of the things that inspire me. Then I bring them back to my studio and work on composition," she said.

Both of her entries are typical of Solomon's style — bursting with color and showcasing nature.

"The most common comment I get on my work is that it’s very joyous," Solomon said. "I want it to be uplifting, My work comes from me, and when I see something and it's very uplifting to me, then I have to paint it. … I feel very blessed that I've been given this gift and can do the thing I love most in life."

When Mallon moved from Queens to Crab Meadow, an area of Fort Salonga, several years ago, a world of artistic possibilities opened up for her. "Coming from a congested urban area to here was such a change," she said. "You cannot get prettier than Crab Meadow, and when we moved, I did a lot of exploring here."

One discovery was the Fort Salonga home where Washington — who was born into slavery in Virginia and went on to found Tuskegee University in Alabama — vacationed from 1911 to 1915. Despite achieving landmark status, the home and its state of deterioration struck a nerve with Mallon, who photographed it.

"Much of my work is political, and the house is such a symbol of what’s wrong these days. It’s a piece of American history we shouldn't let be destroyed," she said.

Much of Mallon's painting and photography is focused on women's issues and the pressures to succeed (the Statue of Liberty figures in several of her works). In addition to expressing her ideas, art keeps her both mentally and physically healthy.

"As an artist, your mind is always working," she said. "You’re always thinking about work, always plotting your next creative work. And physically, especially with photography, you're hiking and among nature."

Wimberley has had many teachers in the nine decades he's been around, starting with his mother, who was an artist and a church organist. (Her love of music also rubbed off on Wimberley, who plays the trumpet.)

"Once you’re taught to paint, it's up to you to actually paint," he said.

That philosophy has landed his works in displays at Guild Hall in East Hampton, the Heckscher Museum in Huntington and Islip Art Museum. In May, the Berry Campbell Gallery in Manhattan held a five-week retrospective of Wimberley's work.

Of the three paintings he submitted for the "50 Plus" exhibit, "Prologue," a paean to the dawn of a new day, was selected. It's a choice that pleased Wimberley.

"The softness of the morning has always attracted me when I get up in the morning," he said. "On Long Island, it's a very romantic thing to go out in the ocean and see things beginning to happen and see the sunrise."

Wimberley has always liked to challenge himself in different media, from oils to collages to pottery. But in all of his work, he has a clear vision, he said: "I try to let the works speak for themselves."

Art was a normal part of family life when Hoffman was a youngster. Her dad's hobby was painting, a passion he passed on to his children.

"My brother and I both became art teachers," she said.

When she retired nine years ago, she took up pastels, and the medium is her "special love now" and a good fit for works like "Winter Sunset."

For "Pollock's World," she created a composition using a few images from among the "zillion photographs" she took during a visit to the Pollock-Krasner House and Study Center in Springs. "The scene outside of the studio is seen from inside his house," she said. "There's a contrast of the quiet sensitivity of the outdoors and the frantic spilling of paint indoors."

Hoffman adds that she never aspired to sell a lot of work: "The goal is to enjoy myself and have something that satisfies."

ENTRY "Friday Night at the Laundromat"

As a girl, Weisbin would spend many an hour making paper dolls and clothes for them. That morphed into creating portraits and her first oil painting when she was 14. These days, her paint style has been creating slices of life, such as "Friday Night at the Laundromat."

"I was going there every Friday night for a while. Friends gave us a washing machine and a dryer, but I still couldn't always use it," she said. So along with her dirty laundry, detergent and fabric softener, Weisbin took a camera, which she used to take pictures of three women washing clothes.

"The original title was 'Laundromat Madonna' … because the woman in the front looked like she could be a madonna," said Weisbin, who teaches painting at Islip Art Museum. The photo then served as a model for her painting, one in a series she did from the laundromat.

"I am shy about pointing my camera at people," she said. "I prefer working from life, but it's hard to get models."

Weisbin was both surprised and thankful that the painting was selected. "This was another side of life," she said, "and you can find beauty in it."

'Art at 50 Plus: Life on Long Island — What It Means to Me' exhibit