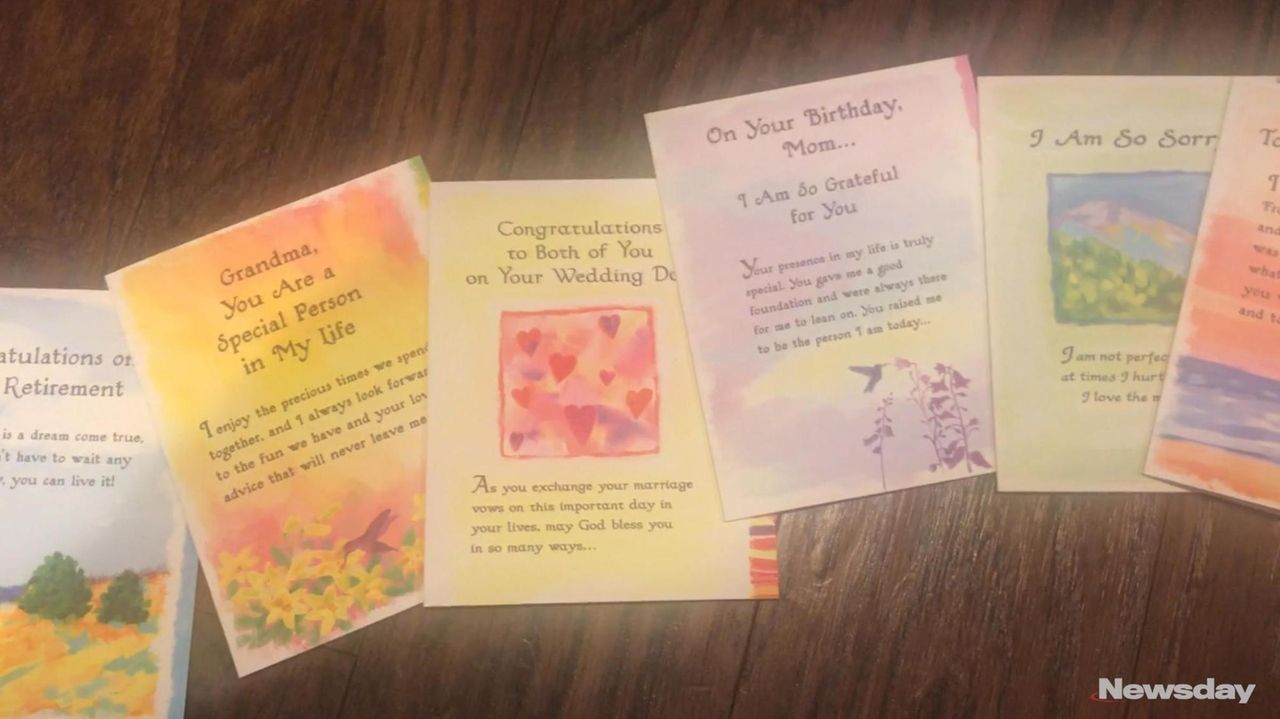 Jean Marie Prince of Nesconset has created her own personal line of more than 50 greeting cards, most with spiritual overtones, sold in Long Island gift shops. Credit: Newsday / Beth Whitehouse

When Jean Marie Prince penned a greeting card to send to people adopting a baby, she was drawing from experience — when she was 2 days old, she was abandoned in a public bathroom in a train station in Seoul, South Korea.

Prince spent the next five years in a Korean orphanage before being adopted by a Long Island family. Today, at 53, she lives in Nesconset and devotes herself to creating inspirational prose about significant life events. Sixteen of her pieces are being tested in 20 stores nationwide by the Boulder, Colorado-based Blue Mountain Arts card company, known for its whimsical pastel designs accompanied by poetic thoughts.

Prince has also created her own personal line of more than 50 cards, most with spiritual overtones, sold in Long Island gift shops.

Those are illustrated by photographs she’s taken capturing nautical scenes such as a sunrise in Long Beach or a sunset in Montauk. King Kullen is also testing those cards at five Long Island stores — Bridgehampton, Massapequa Park, Island Park, Garden City Park and Huntington.

Her topics reach far beyond traditional greeting cards for holidays such as the upcoming Easter celebration. She marks happy occasions such as the aforementioned adoption — “Only God knew that their hearts were going to melt at the first sight of your precious face” — or becoming a police officer — “It takes a very special person to want to protect complete strangers.”

But many also deal with helping people through a struggle, for instance to support those considering divorce, battling addiction, or dealing with a loved one’s suicide. “These are topics you will not usually find in stores,” Prince says.

Prince considers herself an entrepreneur guided by her faith — her logo is a blue butterfly with a cross as its vertebra. “No college education, no formal writing experience, no photography experience,” Prince ticks off when describing herself during an interview in her study on the second floor of her home, with a candle lit on the table and a cup of tea in front of her.

Prince started writing inspirations in 1998. “I was lying in bed with my kids one morning, and I started singing. I thought, ‘Let me write down what I’m singing.’ ”

Her writing evolved over the years. First, she put her words on plaques she gave to family and friends. “I think these would make nice Christmas gifts,” she initially thought. Then she started selling the plaques through stores and at craft shows. She branched into greeting cards professionally in 2017.

“We carry the cards because they have beautiful messages,” says Phyllis Chiarelli, co-owner of Chiarelli’s Religious Goods in New Hyde Park. “They’re appropriate for our clientele. They’re selling well.”

Prince was looking to pitch her cards to a bridal shop in Commack when she coincidentally noticed a greeting card company across the street from the shop. She stopped in.

She showed her cards to the vice president, who presented them to his boss, who suggested Prince attend the 2017 National Stationery Expo in Manhattan, which was happening the following week. That’s where she met Gary Morris, the director of art and editorial for Blue Mountain Arts.

“He starts reading ‘Love of My Life,’ ” Prince says, which is a card with lines such as “From the first time we kissed and when we said, ‘I do’ my life was given a purpose.”

“He goes, ‘This is like a Blue Mountain card,’ ” Prince says. “He said he would have someone contact me.” Two weeks later, someone did. They asked her to send 12 of her pieces, but Prince sent 25. They chose 16.

The company will be testing an additional five cards at stores in 2019.

“What we’re really looking for is an emotional message expressed in an honest and sincere way, in a conversational style,” Morris says.

The test cards are smaller than Blue Mountain Arts’ regular greeting cards, and if Prince’s cards are successful, they’ll be reprinted in the larger form as well.

“We specialize in communicating feelings,” says Blue Mountain Arts editor Ingrid Heffner. “We do think her writing is really nice. It will hopefully resonate really well with our customers, so it will have a bigger print run and be in our catalog.”

In addition to writing prose, Prince also hosts a weekly 30-minute Christian TV talk show that airs on cable and FiOS and on her “Inspired Blessings / Jean Marie Prince” YouTube channel — guests during her more than 130 episodes have included Ray Romano’s brother, Richard, a 20-year veteran of the NYPD who discussed how being in the police department tested his faith. The show opens with a theme song called “My Life Is in Your Hands” that Prince wrote; she’s produced two CDs. And Prince has written a self-published book, also called “Inspired Blessings.”

Prince says her start in life — abandoned and adopted — had a huge influence on her. Originally called Mi Ra Park, she lived in a Holt Christian orphanage and spoke only Korean until she was adopted into an East Islip family. Her adoptive parents already had four sons. “My mother always wanted to have a girl,” Prince says.

She graduated from East Islip High School in 1983 and worked for 15 years as an insurance sales representative for Met Life. She married her husband, Mark, who co-owns a heating and air conditioning business, and they have two children, Dylan, 23, who lives at home, and Chelsea, 26, who lives in Holbrook. They have a baby grandson, Jordan. And they’ve got two dogs — an American bulldog named Zoe and a yellow lab named Riley.

“I think she’s a doll,” Prince’s father, Joseph LaGuardia Sr., 89, of Hauppauge, says of the daughter who takes him to his VA hospital appointments while fitting in her work during the waits for him. “She’s always got her computer with her. She does her work sitting in the chair.”

Prince says she’s honored that her words are being tested by Blue Mountain and in King Kullen, that those companies find her work worthy enough to put through the testing process. “It’s unbelievable,” Prince says. “I’m taking it in stride. I don’t want my head to get big about it. I’m honored even if it goes nowhere.”