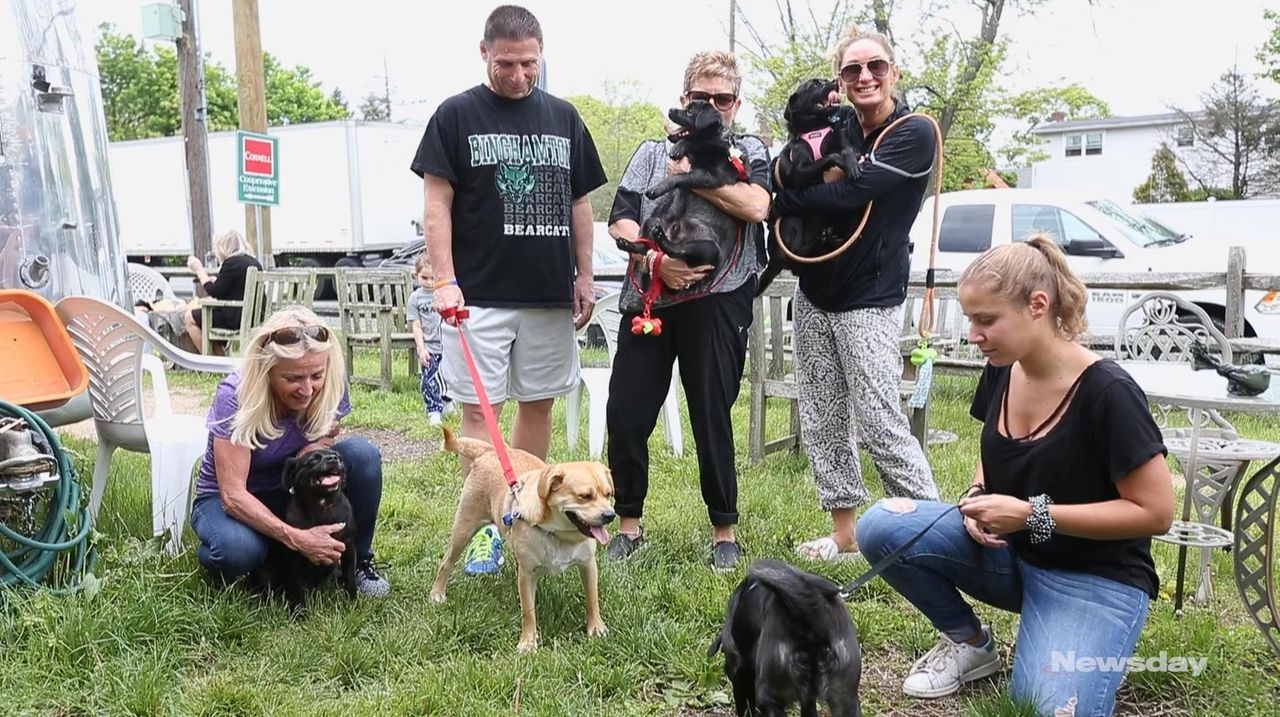 Eight newborn puppies and their nursing mom, Luna, were all left outdoors in last June’s sun to wander free, not far from West Babylon’s Sunrise Highway Service Road. The dogs were rescued by Last Hope and were all given forever homes. Those families have stayed in touch and have become their own family, and as the "matriarch," Pat Voll, of North Bellmore said on Friday, May 17, some or all of them meet almost daily at Newbridge Dog Park in Bellmore. Credit: Anthony J., Causi, Linda Rosier

This tale starts with eight tiny puppies, all left outdoors on their own last year in the hot sun on an unusually warm June day not far from Sunrise Highway Service Road in West Babylon.

A complaint made its way to the Suffolk County SPCA, which investigates reports of animal mistreatment, and one of its officers found the puppies outdoors on a blanket, with their mom, Luna, in a crate.

When the owners opted to surrender the canine family, a chain of rescuers entered the picture, including ultimately the mostly Long Island residents who are now their forever moms and dads.

The narrative continues, with the story of how through these rescued canine siblings the multigenerational puppy parents, humans ranging from 26 to 70 years old, all came to be connected. Many are now entwined in one another’s lives, as a core group meets regularly for romps and chat at a small-dog run in Bellmore.

That’s where the "kids" — known as Luna’s Stars — growl, tumble and cavort, and adults share tips and encouragement, having become “unlikely but great friends,” said Pat Voll, 70. An especially energetic retiree in North Bellmore, Voll is the mom of Kona, formerly known as Venus — and more to come on that name change, we promise.

“Owning a rescue puppy or any dog opens unlikely friendships,” said Voll, the matriarch of the group, among which daily text messages fly fast and furious.

Canine-related issues can range from “Is yours still peeing in the house?” to “How do you stop them from barking?” to — oh no, that day Brady (formerly Neptune) swallowed a baby bird!

• Two puppy moms are now taking classes together at a Bellmore gym.

• Voll, a volunteer at East Meadow Demonstration Farm run by Cornell Cooperative Extension of Nassau County, presented a farming and composting program one day for classes at the school where the pups’ foster mom teaches.

• Any number of forever parents might respond to a text suggesting an impromptu lunch at the food truck run by Alex Klein, 26, mom of Moose, once known as Mercury.

As it turns out, it was “not just about rescuing a dog,” said Lori Lerner, 58, of Wantagh, mom of Brody (formerly Pluto). In addition to that, “we got our other family.”

And, one more thing. Of course it was at that Newbridge Road Park dog run that parents, pups and Mindy Seltzberg, who fostered the puppies, gathered the afternoon of May 18 for a Happy First Birthday celebration.

Pups squirmed through family photo sessions and the “Happy Birthday” song, with several attempting to engage in play with a Newsday photographer who was crouched on the ground to capture the action.

For the siblings — sporting special birthday scarves, blue for boys, yellow for girls — it was mostly play as usual. Kona, as expected, treated her brother Jake, formerly Jupiter and one of the litter’s three blonds, as a steed she tried to ride. In varying combinations, the pups stalked, stared, then attacked — playfully.

When invited to do so, Brody let out his long, high-pitched howl. And as a grand finale, Kona jumped through a big pink hoop — literally.

“That’s what my backyard looked like last summer,” Seltzberg, 51, said, referring to the chasing, wrestling and playful growling of the five small black pups — picture a Lab-pug mix — and three larger blonds, which could be "every combination in the world."

A special-education teacher, she’s also a volunteer with Last Hope Inc., the Wantagh-based not-for-profit that last June took the canine family under wing. That's because the Town of Babylon Animal Shelter, which picked up the surrendered pups, had no area appropriate for hosting a nursing mom and her little ones.

It was shortly before taking up residence with Seltzberg — and just after the group had been surrendered by previous owners — that the puppies received their celestial names, with a nod to that of mom Luna.

At the time, “she was the center of their solar system,” said Joanne Anderson, Last Hope’s outreach coordinator, who, with another foster mom, came up with Venus, Mercury, Neptune, Jupiter, Pluto, Sol, Star and Bruno Mars, all names that have since been changed.

Bruno Mars, now known as Loki, is living in Astoria, Queens, and is looking forward to meeting his siblings, said mom Argyria Kehagias, who was recently introduced to the group but was unable to make it to the party.

As for mom Luna, she’s happily making her home with a Lindenhurst family who “absolutely love her,” Anderson said.

Although another Suffolk County SPCA officer was on the scene the day the canine family was surrendered, Chief Roy Gross was thrilled to hear where the puppies' path had taken them.

A story such as that of Luna’s Stars gives him “the strength to keep on going,” he said. “What makes it all worthwhile is when you see stuff like this — the beauty of the whole thing.”

Last summer, as the time came to find homes for the puppies, Seltzberg posted to area mothers’ Facebook groups the pups’ availability for a foster-to-adopt opportunity. As those wiggly bundles were being taken to different homes, she asked new parents if they would like to be in touch with siblings also in the vicinity.

Voll, a natural organizer and connector, was on the same page, exchanging phone numbers over the following months at Last Hope’s scheduled puppy shot appointments. She also started texting, with “Who’s going to the park today?” becoming a regular message.

With the youngsters presenting “a bit of a challenge,” Klein, of Merrick, said the group has been a great resource and sounding board about the creatures’ various behaviors and shenanigans.

“Whenever I think that I’m the only one with a psycho puppy, I am reassured that I’m not alone.”

As it turns out, Moose is far from the only one to get a bit crazy around 9 p.m., she said.

Asked for her birthday wish for the pack, she said, “I hope we can always keep them in touch, and they have long, healthy lives.”

Also, “It couldn’t hurt for them to take it down a notch with their endless puppy energy!”

Luna’s puppies were initially given celestial names. In their frequent gatherings, the dogs’ divergent personalities have begun to shine.

Kona, formerly Venus (female), is an instigator, a bit of an alpha female. Adopted by Pat Voll.

Moose, formerly Mercury (male), can be the tough guy with the pack but is otherwise mushy and sweet. Adopted by Alex Klein and Harry Rappaport.

Brady, formerly Neptune (male), is always smiling when he’s with the pack. Adopted by Mary Ellen Baguiao and family.

Brody, formerly Pluto (male), was the runt and with the pack still behaves that way. Adopted by Lori and Mitchell Lerner and family.

Zoey, formerly Sol (female), is energetic and loves to play. Adopted by Pennee and Ed Kavanaugh and family.

Not ordinarily a place to find puppies, Last Hope Inc., a Wantagh-based nonprofit, focuses on rescue and rehabilitation of animals in need, as well as those in pounds scheduled to be euthanized. Find it online at

The Suffolk County SPCA enforces animal cruelty laws in the county. To reach the organization, call 631-382-7722 or visit its website at suffolkspca.org.