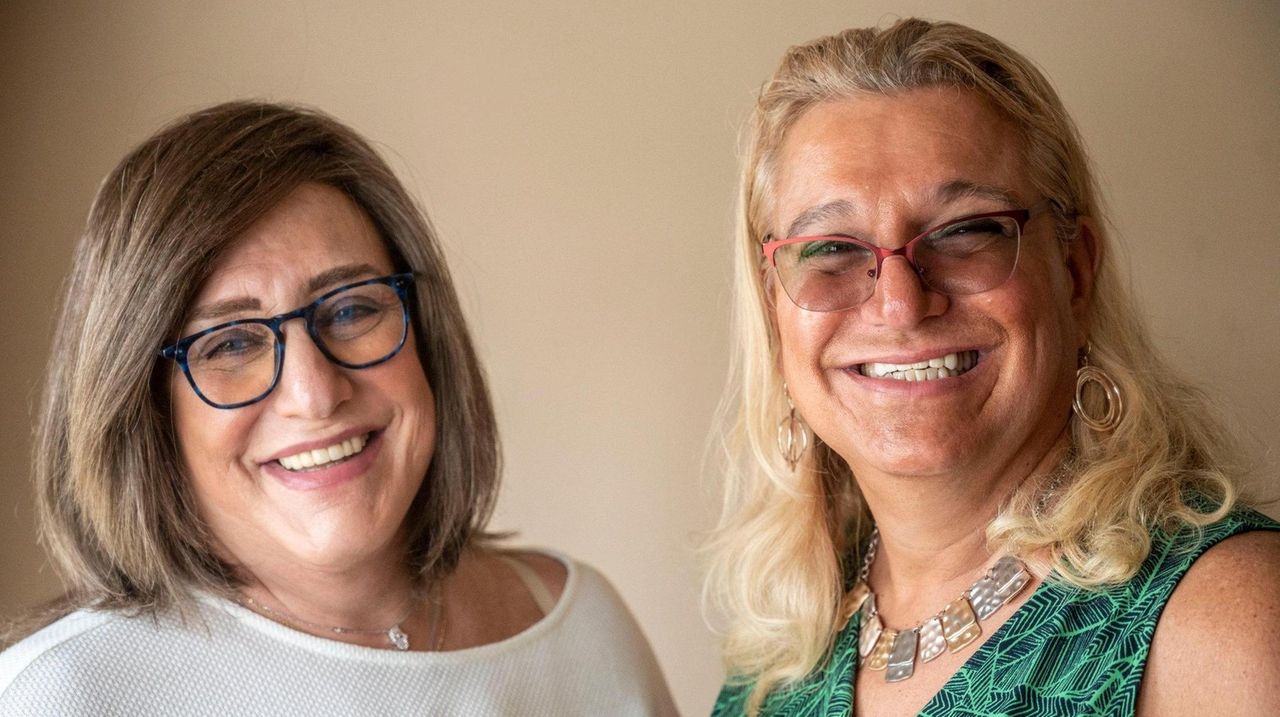 On an outing to the park a while back with her grandkids, Samantha Kutcher recalled, her granddaughter, now 6, matter-of-factly pointed her out to another little girl playing on the swings. "She said, ‘That’s my grandpa. He has a wig and takes it off at night.’ "

"I am follicularly challenged," admitted Kutcher, a pharmacist from Roslyn, who likes to swap out her hairpiece every other day. "Never in a million years did I think that I would have gone this far, living life as a woman."

While conversation these days regarding transgender people often centers on the young — according to a UCLA Williams Institute study, teenagers account for the highest percentage of individuals whose identity does not correspond with their birth sex — more and more older people are transitioning, challenging not just stereotypes about gender but about age, too.

"Except for my bad knee, I can’t reconcile the fact that I’m as old as I am," said Joanne Borden, who is approaching her 95th birthday but did not fully embrace her true gender identity until she was solidly in her 80s. Doing so appears to have given the North Woodmere resident a new lease on life. The retired industrial engineer and World War II veteran formerly known as Joel has since authored three books on the subject and has become a well-known lobbyist and advocate for transgender and women’s civil rights.

Borden, like other senior adults facing the changes later life brings, asked herself, why not seize an opportunity she felt was previously denied? "I had thought the idea of men living as women was just fiction," said Borden, who, before the advent of the Internet, turned to specialty bookstores for information. "Back then we were all known as transvestites."

"We didn’t have the vocabulary," explained Kutcher, 69, who said she realized as an 8-year-old boy named Stuart that she was different. "There was transvestite and cross-dresser — and drag queen I didn’t consider. I would cry at night. I knew they didn’t tell the story of who I was."

With less information available, "older generations couldn’t connect feelings about living in the wrong body," noted David Kilmnick, president and CEO of The LGBT Network, a nonprofit serving tens of thousands from the LGBTQ+ community across Long Island, including, at minimum, 350 trans adults. "It’s not easy, all those years hiding who they are. Coming out is a lifesaving decision for many folks, even though they can lose so much."

The list of what can be lost is long. Marriage, family, friends, housing, jobs, financial stability, to name a few. "I wish I could have waited longer," said Ashley Sarrantonio, who likens the struggle of suppressing one’s authentic self to the biological urgency one feels when having to rush to the toilet. Sarrantonio, a pharmacist then living in Bellmore with her wife of 23 years and their two young teenagers, knew in 2015 that she had to move forward. "I was fighting it. I feared, if the marriage fell apart, what would I face and what would be?"

Sarrantonio considers herself fortunate, in that her family has been largely supportive. She has been able to maintain an amicable rapport with her ex and has made preserving a relationship with her children her top priority. "My son still only calls me ‘Dad,’" she said, "and I tell him it’s the best thing I have ever been called."

Many members of her traditional Roman Catholic family needed time to adjust. "It took my 89-year-old mom a year or so to fully accept it. She said she was never going to call me Ashley, but then one day she went somewhere and left me a note using my name," said Sarrantonio, whose mother lives with her.

"You can’t be totally adversarial," said Kutcher, noting that some younger trans folk can be impatient about others adopting their preferred pronoun, for instance. As a facilitator in a support meeting for PFLAG Long Island, part of a national organization of families and friends of the LGBTQ+ community, Kutcher said she was particularly struck by a comment made by one parent in the group to her child. "‘This knowledge has been inside you for five years, 10 years,’ the woman said. ‘Don’t I deserve that time, that respect?’"

Roger Sherman, a filmmaker who has had homes on Long Island’s East End, recognizes the process of acceptance in his recently released documentary "The Second Life of Jamie P," which follows the journey of a 63-year-old transgender woman.

"Only when my friend of over 40 years came out to me and we worked together on the film for three years, did I really understand," Sherman said of his film’s subject. "Trans families and close friends tell me Jamie's openness and willingness to hold nothing back have given them a new perspective about the transgender relative or friend they love. Over and over people say what Jamie's ex-wife tells us, ‘We're all transitioning together.’"

Kutcher described her wife of 46 years and counting as one of those who needed time. "She wouldn’t even look at me for two years, but little by little she started understanding. We go shopping, for dinner and talk more than ever before," she said. "There are no lies between us anymore."

While Kutcher also maintains a strong relationship with her daughter, it has proven more difficult with her son and brother. "It’s upsetting. I am not going to say it isn’t," she admitted. "I continue to acknowledge their birthdays and other occasions, even though I don’t get acknowledged in return. It hurts — I’m the same person inside."

"When they see me and my changes, are they going to make it about them?" worried Evan Murphy, a 54-year-old trans man from Port Jefferson Station, of the people in his life. Fortunately, that was generally not the case. "It was grounds for gossip, for sure," he said with regard to some of his co-workers, "but eventually I became old news."

Murphy’s family and inner circle were accepting too, though, as Eileen, he hadn’t married and did not have to navigate with a spouse or kids. "If I wasn’t content with myself, how could I take care of anyone else?" explained Murphy, who drives a school bus. "Young transgender people can live more authentically and I admire that, but I don’t want to dwell on what could have been."

In Kutcher’s words, every transgender person’s journey is uniquely their own. "A friend of mine likens it to traveling on the LIRR from Penn Station to Montauk, with the latter a euphemism for making the complete physical transition," she said.

"Some people might get off at Woodside, find it’s not so bad and stay a year or so and then hop back on. At the next stop, Jamaica, they see there’s much more there they want or need. And some people are not satisfied until they get to Montauk, a euphemism for complete physical transition, including bottom surgery."

Kutcher’s first stop, so to speak, happened 20 years ago when she started amassing a wardrobe that more accurately expressed her gender and that she would wear out and about on her days off during the time her wife was at work as a schoolteacher.

"It offered some sort of release," she explained. "I wanted to go out during the daytime, to be a part of society. I wanted to live amongst the living."

Although Kutcher said she has pulled into the Montauk station a couple of times, she has ultimately decided not to get off. "It’s complicated surgery. I am not sure I want to deal with it at this age," she explained.

"Some people can’t wait to get to the operating table, but I found I could be content with less," offered Borden, who didn’t begin her transition until her wife and most of her contemporaries had died. "Maybe it’s because I’m from a different era. I had to be ‘on’ all the time. I had to be very careful that I didn’t out myself. But after taking hormones, I could relax as a woman in public and was satisfied."

Sarrantonio, on the other hand, decided to undergo surgery two years ago. "I am super happy," she said, explaining that it took her time to get there. "I began dressing in women’s evening wear on Friday or Saturday nights, and then I started to realize I needed to do it 24/7. My top priority, though, was retaining a relationship with my children. My thought process wasn’t about me and where I wanted to go with my body."

Help on the journey

Inspired by the young people behind the WorldPride movement, Murphy said he mustered the courage a year-and-a-half ago to start making changes to his body, though he had realized he identified as a man five years earlier. "I felt like I was being phony to myself," he said. "I started taking hormones and right away felt more comfortable in my own skin."

In June, he underwent top surgery at Northwell Health’s Center for Transgender Care, which opened in New Hyde Park as the first of its kind on Long Island the same month. While physical appearance clearly matters to Murphy, he does not see himself undergoing bottom surgery.

"I’m in my 50s. It’s complicated and takes multiple procedures," he explained. "I don’t think it would make me more valid. I feel I’m enough as I am." Murphy added that visits to the center have even helped with issues outside the medical arena, providing access to advice, for example, on changing documentation — birth and death certificates, Social Security cards, passports, credit card accounts, and so on — to reflect his new name and gender identity.

Similarly, Sarrantonio appreciates the specialized care and support that the Northwell center provides, though she has also continued to see the primary care doctor who treated her before transitioning.

"The trans community has historically been discriminated against. The center is a comprehensive dedicated safe space," said Dr. David Rosenthal, the medical director of the Northwell program, which since its inception in 2016 has treated about 700 patients in 40 different clinical fields, from endocrinology to plastic surgery to mental health. Rosenthal highlighted other efforts by the hospital system to address the needs of the trans community, including new curriculum for Hofstra/Northwell’s Zucker School of Medicine and the implementation of gender identification options on medical forms as part of standard routine care.

Much like Northwell and other area health systems (Stony Brook’s University and Southampton hospitals have been recognized by the Human Rights Campaign Foundation for their LGBTQ health care initiatives), these older transitioning individuals are keen on improving the lives of those in their community.

"Before transitioning I tried to live under the radar," Murphy said. "I am ready to change that. It is scary, I know. But I want my story to get out. I’m OK with being a little louder about this."

According to the Human Rights Campaign Foundation, there are more than 2 million transgender people in the United States. They may be your next-door neighbor, your co-worker, your friend, spouse, sibling, child — or grandparent. Here are online (and streaming) resources that can help cisgender individuals — those whose gender identity matches their sex at birth — learn how to be an ally for their transgender acquaintances and loved ones.