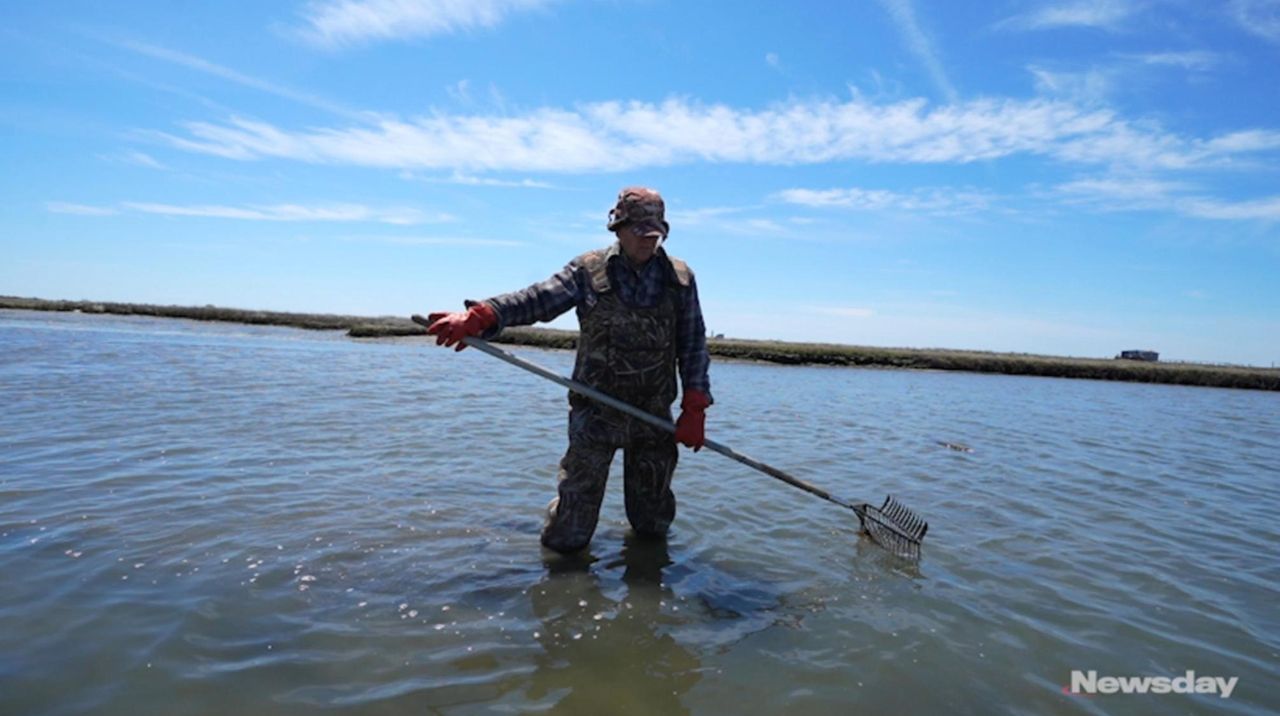 Ben Sohm can't remember a time when he wasn't on the water. A fisherman from Amity Harbor, he is committed to the preservation of the wetlands and waters to keep the fishing tradition alive.  Credit: Randee Daddona

Ben Sohm stands on the second floor of his Amity Harbor home, surveying his surroundings through an expansive bay window.

Below him, Ketcham Creek rolls its way to the Great South Bay, visible in the distance. His personal armada of a half dozen skiffs, duck-hunting and deep-sea fishing boats, is assembled along the dock abutting his house. Around him, arrayed on shelves that surround the living room, is his collection of vintage duck decoys, many carved a century ago by the baymen of Seaford, where Sohm grew up.

How many of these cork and wood waterfowl does he have?

"Too many," answers his wife, Kate, with perfect timing, and a laugh.

But the most telling item in his collection is framed on the wall, near the carved ducks and family photos: A faded copy of Frank Roach's New York State hunting license, issued in 1916.

It was Roach, Sohm's maternal grandfather, who inaugurated him into the life of a bayman, a tradition Sohm carries on, with aplomb, even at his own grandfatherly age of 76.

"He can sail, fix an outboard engine, repair a hole in a fiberglass boat, build a meadow box for hunting ducks and make some pretty good stuffed flounder, too," says Sohm's longtime friend and former teaching colleague Kenny Bernstein.

'A link to the past'

Sohm is deeply committed to the preservation of the wetlands and waters of Long Island. He opposes rampant development and is concerned with the effects on the bay of pollution from cars and people. That said, he sometimes finds himself in disagreement with regulators and environmental policies. Case in point: State catch limits. Sohm contends that the regulations on which size fish of various species can be caught, and which released, are sometimes counterproductive, "because we often end up killing the larger, breeder fish."

"He's really a traditional conservationist," says Nancy Solomon, director of Long Island Traditions, an organization that documents and celebrates local history and folkways. "We interpret that as someone who wants to ensure that the environment, the habitat where these traditional activities take place, is there for future generations."

For Sohm that link was profoundly shaped by his grandfather. Growing up in Seaford, Sohm was exposed at an early age to the bay, by Roach — whose own story (one that Sohm has carefully chronicled) is illustrative of an important chapter in Long Island history.

Born in the East New York section of Brooklyn in 1888, Roach grew up hunting in nearby Jamaica Bay, and as a teenager in 1904, made his way east to Seaford, then a hotbed of commercial fishing, clamming and duck hunting. Roach became a "market gunner," hunting the ducks whose numbers were then so great they formed sun-obscuring clouds over the South Shore of Long Island, and whose meat was a prized delicacy at New York City restaurants.

"He fell in love with the area," says Sohm, "and he transferred that love of the bay, love of fishing, love of hunting, love of decoy making, to me."

The affection is evident in old black-and-white photos that Sohm produces in a worn scrapbook. There, standing beside a grizzled but kindly looking older gentlemen — Frank Roach, by then in his 70s — young Ben, 10 years old, smiles as he holds up a big fish.

There are pages of such photos, each with young Sohm and his grandfather smiling and displaying their catch; each has a story behind it. "Ben and Pa," reads another caption. "3 fish, the big one was 10 pounds. What a fight!"

The bond between the two is almost palpable. Roach died in 1971, and one senses that nearly half a century later, there's a part of his grandson that wishes the two could hop in his boat and whir out to the bay for a day of fishing or duck hunting. Almost reverentially, he holds up a black, carved duck. "The last decoy he made," says Sohm. "I watched him carve this, around 1965."

Along with the decoys — used by the market gunners to lure their prey within shooting range — Sohm can discourse on real ducks, too: the Brant, canvasbacks and black ducks that were the main target of commercial hunters like Roach. "He could shoot a duck, draw it and pluck it in three minutes," Sohm said. "And it would be packed up and shipped off to the city that day."

All of that changed after World War II. When Sohm was a young man he made the decision not to follow his grandfather into what was already a dying industry. "You could see it was coming to an end, at least in Seaford, in the late ’60s," he says.

Instead, young Ben became a teacher. He worked in the Amityville school district for 32 years, teaching special education, and working summers on the bay. Since retiring from education in 1999, Sohm has continued to ply the waters of Long Island for a little money — and a great love of the tradition.

"There's no future in the bay if you're trying to make a full-time living," he says. "But there's still natural beauty. There's still opportunity for those who love the water."

Although he claims to be slowing down, Sohm still works the waters. This month he'll be out catching spearing — the minnow-like fish that provide bait for the bigger and more popular flukes that will soon be in season. "I'll sell some of the spearing to bait and tackle shops," he says. "And the rest, I'll keep for personal use."

Later this summer, he'll fish for bass. Sohm — who has a commercial clamming license — will also be digging for those mollusks, as well as crabbing, over the summer months.

He introduced his wife to his life aquatic when the two met in 2004 (Sohm has three grown children from a previous marriage). She accompanied him one weekend to the historic, 1910 bay house, built amid the marshes of South Oyster Bay, that Sohm co-owned with his longtime friend and fellow Seaford bayman, the late Bill Powell (the house is still owned by the two families).

"I was kind of hooked," Kate admits about her immersion into the ways of the bay. "I liked shooting a gun. And I liked the fact that he would only shoot what he would eat."

Both he and Kate are also involved in preservation and education efforts that help to recognize the bay traditions on Long Island. He is president of the Long Island Decoy Collectors Association; a member of the board of directors of the Seaford Historical Society; and has been an officer with the South Shore Waterfowlers (Kate is currently vice president of that organization).

"We are more than 'just hunters,'" the Waterfowlers' website declares. "Our mission is to promote our rich waterfowling heritage, celebrate it and be an advocate to protect our resource."

Celebrate, advocate, protect the ways of the past. That's not a bad description of Sohm's priorities.

"I would call Ben a naturalist," says Bernstein, a former Massapequa resident who taught (and fished and hunted) with Sohm, and now lives in Florida. "The things I've learned from him are incredible."

"He's what I consider a master tradition bearer," Solomon says. "Someone carrying on a tradition they grew up in, and they’re making sure it's preserved for the next generation."

In Sohm's case, it's the tradition of the man whose faded hunting license hangs on his wall: his grandfather Frank Roach.

"I hope he would be," replies her husband. "I really appreciate everything he did for me and for introducing me to this world."

6:10
An accident almost derailed her baking career. Now her cake shop is a runaway success
LI drive-in movie, concert schedule for the spring and summer
Mother's Day celebrations on LI, more things to do this weekend
Where to get great gelato on LI
Hidden LI farm supplies farmers markets all year-round
2:18
Cuomo lifting capacity restrictions May 19
Didn’t find what you were looking for?