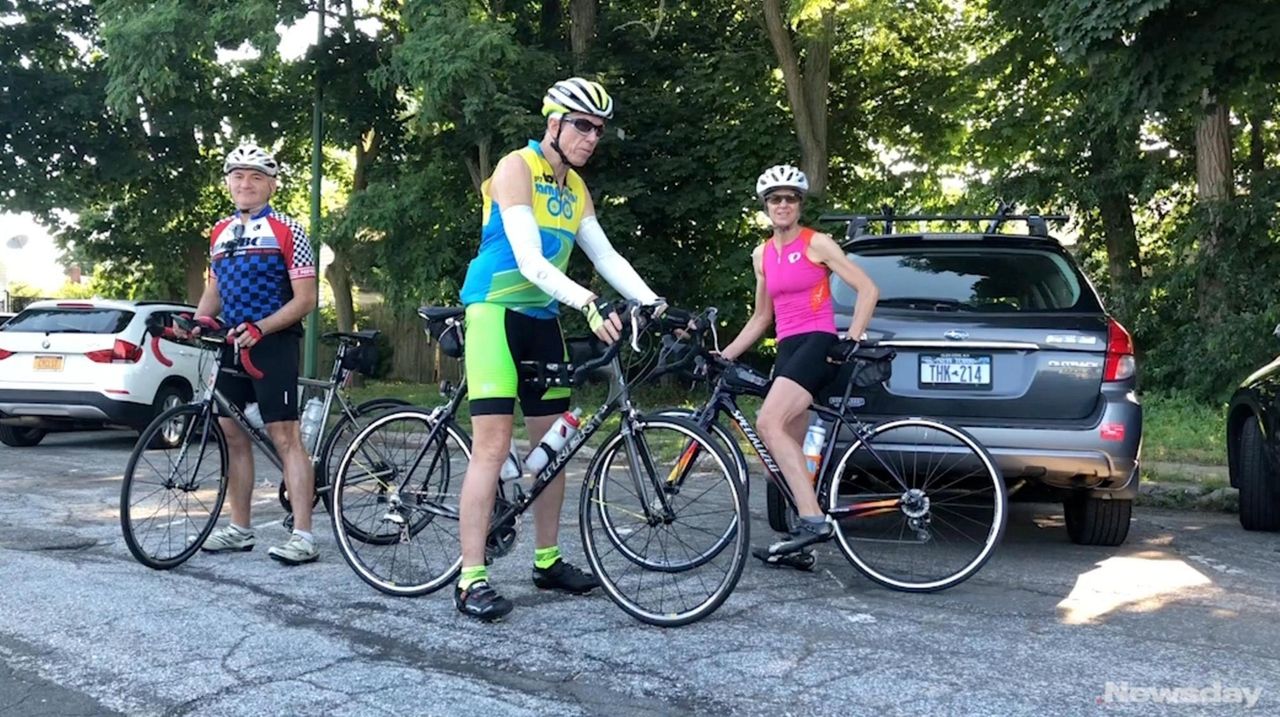 The Massapequa Park Bicycle Club discussed their mutual love for cycling and how their unbreakable bond makes for better athletes on Saturday, June 30,2018.  Credit: Howard Schnapp

On any given weekend morning, John Greene’s joie de vivre is on full display. Decked out in spandex, Greene joins other cyclists from the Huntington Bicycle Club — sporting similarly colorful, highly visible gear — for rides of 40 to 100 miles.

The Northport resident, who is 64, also rides weekdays after work, pedaling away into the fading hours of sunlight. But the weekend rides are what really get his adrenaline going, said Greene, who has been vice president of Huntington club for the past eight years of his decadelong association with the organization.

“The group ride makes you ride farther and longer than you ever thought you would do,” he said. “In a group setting, you forget how far you’re going because you’re talking to people, riding behind people, and you’re part of this whole thing that’s just moving forward.”

Cycling opens up new adventures, said Greene, who averages about 5,000 miles a year. “You see a lot of things that you wouldn’t see in a car. You hear things and smell things.”

In the evening, he said, he smells what people are barbecuing as he rides past their homes. “You hear the birds, the wind in the trees. It’s relaxing, especially when you’re down a quiet road,” Greene said.

On a bicycle, there’s also access to smaller roads that lead to bays and coves. “You’re so much more inclined to stop and admire the scenery, than if you were in a car,” he says.

“I think I’ve been around the Earth about the equivalent of eight times,” quipped the Dix Hills resident, who said he rides three or four times a week.

Bender also instituted the club’s Safety Committee, bringing proper riding procedures to cyclists’ attention. During rides, he reminds cyclists to obey traffic rules as if driving a car and to alert one another to approaching cars, potholes and other hazards.

“It’s low impact; it’s very healthy for you,” he said. “And the people that you meet and the fact that you can converse on the bike: We tell jokes; we have a great time; we talk politics — whatever.

“It’s just the perfect combination of something that’s good for you, and you can enjoy at the same time.”

When her company started a wellness program several years ago, Leah Landro, of Old Bethpage, bought herself a bicycle.

“If I’m going to make this work, I’m going to start riding a bike,” Landro recalled thinking. The first year, Landro, 57, rode alone on a hybrid along the bicycle path near her home, then switched to a road bike and cycling with the Massapequa Park Bicycle Club.

These days, Landro rides with the club every Saturday and Sunday as well as solo a few times a week before work. On off days, she runs.

Aerobic exercise is essential for mature adults, says Dr. William Briner Jr., a fellow of the American College of Sports Medicine and a primary care sports medicine physician at the Hospital for Special Surgery in Uniondale and Manhattan. Aerobic exercise, Briner notes, gives muscles endurance and helps ward off such chronic diseases as Type 2 diabetes.

“Cycling is non-weight-bearing and involves no impact, so it is ideal for patients with any amount of osteoarthritis in their hips or knees,” Briner said.

Indeed, Bender and Paul Casamassina are former runners who took to cycling when they developed problems with their joints.

“I wanted to find a way to still get exercise and make it low impact,” Bender said. “Riding a bike is just that: It’s great lower body exercise, but you don’t have that impact that affects your joints.”

A former marathoner, Casamassina, 60, of Plainview, switched to cycling after a hip replacement.

“It’s great for me. I get my cardio in, and I get to have fun,” said Casamassina, another MPBC member. “I don’t run anymore, but, to be honest, I don’t miss it.”

For Tom Regan, a former mountain climber, cycling is a means to improve his conditioning and strengthen his legs.

A member of both cycling clubs, Regan, 71, of Plainview, rides three times a week — about 200 miles all told. He said he feels he’s now strong enough to again climb high peaks.

“It motivates you, to go with a group,” Regan said. “To push the envelope, exercise-wise, and yet be safe.”

Safety is a big factor in group rides, Regan added, noting that cyclists alone on the road may encounter drivers who don’t heed their presence or who drive dangerously close to them.

“When you’re in a group, that doesn’t happen,” he said.

If you’re not physically active and want to start cycling, Briner advises easing into the sport, starting with five minutes on a stationary bicycle, increasing by five-minute increments and taking a day off between each stint.

“Once you can go for 20 minutes on a stationary bike, it’s probably OK to start an outdoor cycling program,“ Briner said, adding that those with health risk factors should consult a doctor before starting an exercise program.

If you don’t have access to an indoor bike, start with very short rides outdoors and work your way up to 45 minutes three times a week to get an aerobic workout.

Riders can use “any kind of bicycle they have,” he said. Another benefit: “They don’t need fancy clothes or anything. We go really slow, and we do shorter rides,” Panzenbeck said.

The EZ riders typically average less than 11 miles an hour and start the season with eight-mile rides. They gradually increase speed and distance, explained Panzenbeck, adding, “You can’t help but get better as you go.”

Before joining the Massapequa Park club six years ago, Andrew Scheferman, 52, of Merrick, rode by himself on the flatter roads and bike paths along the South Shore. The club rides took him to the hilly terrain of the North Shore.

“I was really not prepared for those hills at all,” Scheferman said. Riding with the club, he clocks considerably more miles each year and has mastered the vertical climbs.

Club cycling has taken him to parts of the Island he wouldn’t have otherwise explored by bicycle, said Scheferman. He said he particularly enjoys HBC’s Gold Coast Tour, which takes him along the North Shore of Nassau and western Suffolk, and the Suffolk Bicycle Riders Association’s Bike Boat Bike, which introduced him to Shelter Island.

For Casamassina, riding with MPBC has had an unexpected bonus: camaraderie and friendships.

“I have friends now that are going to be friends for life. It’s just a wonderful thing,” he said.

Beyond physical fitness, Landro also deeply values the social aspect of club rides. “The diversity of the group is amazing: people from all different aspects of life,” Landro said.

Cycling is a great way to see the Island, meet new but like-minded people and maintain fitness doing something you love, noted Bill Selsky, president of the Long Island Bicycle Club of Westbury

Selsky, 64, of East Meadow also credits cycling with reducing stress. “When you bike, getting up the next hill and finishing the ride are what you concentrate on. Other matters disappear — at least for the moment,” he said.

Greene agreed. “It’s almost like therapy,” he said. “You get into your own thoughts. It’s really quite fun in that way.”

A lifelong cyclist, Nancy Graf rides with the Massapequa Park club and uses her bicycle as a means of transportation.

“Bicycling is ecological, economical and exciting,” said Graf, 59, of New Hyde Park. “You’re at one with nature, immersed in the sights, sounds and smells of your surroundings. When I bike, I’m truly alive!”

TOUR OF THE HAMPTONS

A large club ride like Tour of the Hamptons benefits everybody, says MPBC president Anna Murania, because cyclists get to meet and ride with new people.

“We have 900 riders that do that ride,” said Murania, 56, of Deer Park. “Most of them are club riders, but some are recreational riders or groups riding for charity.”

In addition to annual rides, clubs on Long Island organize regular group rides, mostly on weekend mornings, throughout the spring, summer and fall.