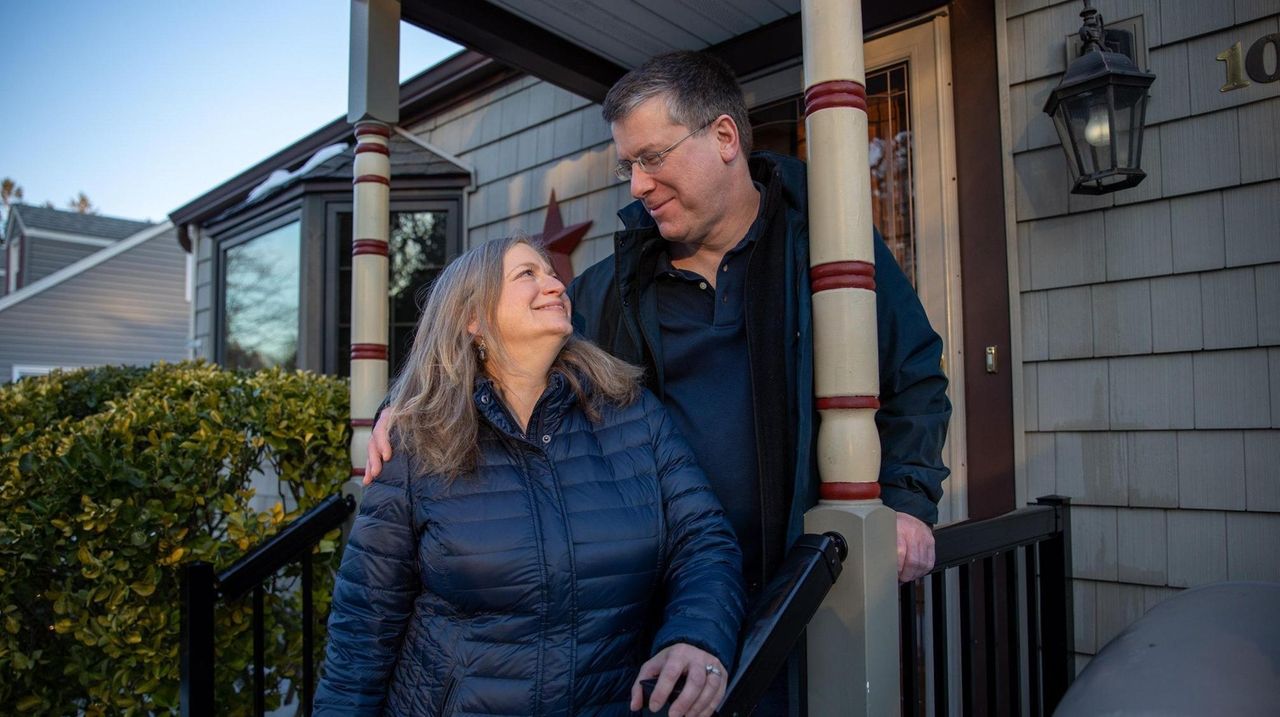 "And it takes no time to fall in love

But it takes you years to know what love is."

— From the song "Life Is Wonderful," by Jason Mraz

Love can seemingly happen to anyone — anywhere, anytime. Or so the modern celebration of Valentine’s Day would have us believe. The holiday, rooted in ancient Rome, has morphed into the elevation of the picture-perfect happily-ever-after. Yet for some, relationships seem easier to navigate as seasoned adults than as those in the bloom of youth.

"When couples are older, they have had more life experiences and this can enable them to develop more realistic expectations of their partners and of relationships in general," Shulman explained. "With age people hopefully have a better understanding of their strengths, weaknesses, needs and the roles they play in relationships, which promotes healthier communication and bonds with their partners."

So this year, here’s a look at three couples who prove that love just might take a (near) lifetime to find.

A reunion to remember

The couple, who live in East Northport and are both 58, knew each other from junior high school and Harborfields High School in Greenlawn.

"A lot of our mutual friends were in the same group," said Larry, a Huntington-based dentist. "So, we would be at the same parties and that kind of thing, but we never did anything, just the two of us."

After marrying Michael Deerwester in 1987, Carol moved to Florida, later settled in Maine and had three sons. As time went on, she lost touch with many of her old friends — until joining Facebook in 2009.

In September 2015, Carol’s high school boyfriend hosted a 35th high school reunion in his Chatham, New Jersey, home for about 30 classmates, half of whom stayed over.

Driving to the reunion, Carol, widowed in 2007, recalled telling her friend Cathy, "’I’m done. I don’t want to date anyone. I just don’t want to do it anymore.’"

Her resolve slipped away when she walked through the threshold of her first reunion and was instantly attracted to Larry, who has stayed in closer touch with old friends and has gone to all of them.

"I was excited to be there. I hadn’t seen most of these people in 35 years," said Carol, an executive assistant to the Suffolk County Dental Society.

After those gathered spent time by the pool then moved indoors for cocktails, Larry recalled, "The crew decided it was ridiculous I wasn’t married."

They also turned their attention to Carol, joking that the two of them should get married. Carol and Larry played along gamely, calling each other husband and wife the rest of the night.

The next morning, Carol announced that she’d lost an earring, and Larry was on the case. He searched until he located it outside near the pool.

"I just thought that was so sweet — that he was taking the time to do that," Carol said of Larry’s detective work.

Yet, not wishing to pursue a long-distance relationship, Larry went home without Carol’s phone number. Carol had other plans. The next day, she sent Larry a Facebook message asking for his number. Initial texts were followed by more messages and marathon phone calls, the first of which clocked in at six hours.

About two months later, they met up for a weekend about halfway between their Maine and Long Island abodes, at Foxwoods Resort Casino in Connecticut.

"After that we were an item," Carol said.

"We kept it a secret from our high school friends," said Larry, explaining that until they knew where the relationship was going, they didn’t want undue influence from friends. After about a month or two, they broke the news to friends — all delighted for them and quite a few taking credit for the match.

Living six hours apart, they were determined to see each other every two weeks, meeting in one random town or another for romantic weekends. That lasted two years, until Carol moved into Larry’s house in 2017.

"I left a great group of friends and co-workers and a job I loved at Maine Medical Center in Portland," Carol said. She started her job at the dental society in July 2018, after a six-month stint working for Mount Sinai Doctors.

After all his years of bachelorhood, Larry said he didn’t hesitate to dive into a serious relationship with Carol.

"My parents had an unbelievably close relationship and that’s what I was looking for," he said. "When Carol and I started dating it just finally felt the way I thought it should."

Once it’s safe to gather again post-pandemic, they plan to get married and celebrate with family and friends. "We’re making it through a pandemic, so that’s a pretty good sign," Larry said of their abiding commitment. "We’re happy now, and no one’s going anywhere."

For her part, Carol feels lucky to get a second chance to find love. "I think it’s different because we started our relationship later in life, when we’re mature and experienced in how we can deal with what life throws at us, good and bad," she said. "I’m so happy to have found Larry and get to spend the rest of my life with him."

And, she said her later-in-life relationship is getting rave reviews from her sons, now 33, 30 and 27.

"They see how happy Larry and I are, and totally support our relationship," she said.

The second time they ran into each other — that was the charm for Carolyn and Michael Levey.

Though they both graduated from Sachem High School North in Lake Ronkonkoma, Class of 1986, Carolyn, 52, a dental hygienist, and Mike, 53, who owns a process-server business, didn’t know each other well in their class of 1,500 students.

Three years after graduation, the couple, who live in Setauket, both happened to be hanging out at the Salty Dog Club in Huntington.

"From that point on, we dated a little bit, but I have to say we weren’t fully committed," Carolyn said. "Honestly, I kind of wanted a little bit more. It was just timing for us."

"Young and dumb," is how Mike described his 20-year-old state of mind. "It was a connection that didn’t come fully around."

Carolyn met someone else, married and had two sons and a daughter. After 12 years, she and her husband split up.

"There was definitely some missing stuff in that marriage, for sure. Nonetheless, we never parted ways in a bad way," she said.

In the meantime, Mike married when he was 30, didn’t have children and was divorced six years later.

In May 2007, both separated, they ran into each other at Home Depot: Mike was buying supplies for the handyman business he had at the time; Carolyn was shopping for items to spruce up her home before selling it. which she was selling. Offering to help her out with any work she needed, Mike gave Carol his card.

The next time the two spoke by phone, Mike asked Carolyn to lunch, but she wasn’t ready to date. Six weeks later, they went on their first date, the second time around.

"We look back so many times and it’s just strange how things came about. We feel like it was kind of meant to be," Carolyn said.

After an 18-month courtship, they were engaged in May 2009 and married that October.

Conjecturing on why the relationship works now, but didn’t years earlier, Mike said, "When you have different life experiences you realize what’s important and what has you grounded. Basically, when you’re a single guy — you’re 20 years old and living by yourself — you kind of almost don’t want to get tied down."

One hesitation the younger Mike had was his apprehension that Carolyn wouldn’t want to do adventurous things, like simulated skydiving. Years later, he realized she’d be game for that and more: He simply had to ask.

"You just experience different people in different situations," said Mike, referring to his evolving maturity. "I think it just opens your eyes to what you probably really should have had in your fingertips and not let go."

"I don’t think there’s many people you meet in your life that touch you the way he did," Carolyn said. "I just felt from the beginning there was a connection. It felt effortless, like we could connect on many levels."

"It was a culture shock," Mike said of the ready-made family. "But, it felt like it was part of the package … It just felt like it is what it should be."

Once married, they gave themselves three months to try to have a child together because of Carolyn’s age and past high-risk pregnancies. By the second month, Carolyn was pregnant with their daughter, Kelli, now 10.

"It’s really been quite the ride, I have to say," Carolyn said.

Kirsten Rasmussen and Robert Hanawalt, both 56, also knew each other — barely — from Elwood High School, Class of 1983, and later connected through Facebook.

"I had gone onto Facebook first and connected with old high school friends and acquaintances," explained Robert, who works for a wine distributor in Manhattan.

By the time Kirsten joined Facebook a few years later and Robert sent her friend request in late 2009, he was living in Prague, where he worked as a translator and taught English. Kristen, who runs a pastry business from home, was a single mom living in the home they now share in Northport.

"We just sort of hit off a relationship long distance," Robert said.

"We were both ‘alone,’ " Kirsten said. "And, we enjoyed each other’s conversations and company during visits."

As the couple spoke nightly via Skype, frequently emailed each other and shared photos via Facebook Messenger, they grew closer and fell in love.

"When the conversations started to get a little deeper, I think that tended to enable us to open up to each other more," Robert said.

Beginning in January 2010, their long-distance courtship spanned a full year, with Robert visiting Kirsten on Long Island in the spring and fall, then playing host and tour guide to her in Prague over the summer. On Christmas Eve, Robert and his cat, Serena moved back for good — and in with Kirsten, her son, Jesse, now 14, and their cat, Theo.

For Kirsten, who had married in her early 30s, divorced, then had Jesse with her boyfriend, Robert’s budding relationship with her son sealed the deal.

"Jesse was my deciding factor in our relationship," Kirsten said. "If it didn’t work out, then the relationship wouldn’t continue."

"Of course, I knew what I was getting into," said Robert, whose home-based office allowed him to really bond with Jesse, then in preschool.

Kirsten and Robert got married two years later, in May 2012.

"She came along just at the right time, and I just felt like she really was the person I wanted to spend my life with," Robert said. "We discovered we had a lot in common, more than just our shared school experience."

"We have the same values and interests," Kirsten said of their shared passion for good food and travel. "We’re both animal lovers and diplomatic in nature." Though she found love through social media, Kirsten doesn’t necessarily recommend it for others. Instead, she advises people to pursue the things they enjoy, like hiking or cooking, and to join groups that engage in those activities.

"That’s the advice I would give to somebody if you want to meet somebody: Try to find somebody who has your own interests," Kirsten said, adding, "We just got lucky [that] we met through Facebook."