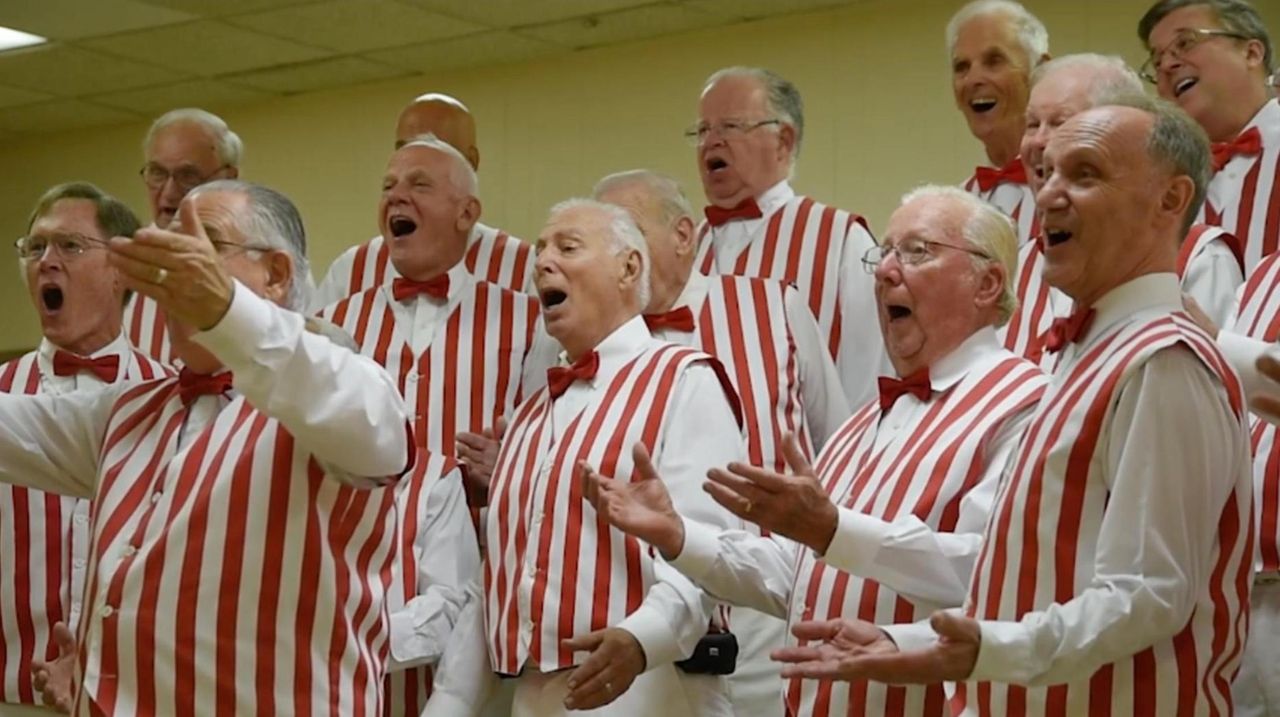 In the basement of Faith Lutheran Church in Syosset on a recent Tuesday night, a group of 20 or so men in candy-striped vests, white pants and red bow ties stand at attention. All eyes are on the conductor, but there isn’t a musical instrument in sight. Toes tap, bodies sway and heads bop as the chorus members sing a warm-up number titled “The Old Songs” in four-part a cappella barbershop.

“In barbershop, there is no musical accompaniment; the voices are the instruments,” said Robert Miraglia, president of the Long Island Harmonizers, also known as the Nassau Mid-Island Chapter.

Founded nearly 70 years ago, the Harmonizers, Long Island’s largest chapter of the Nashville, Tennessee-based Barbershop Harmony Society, is an all-male a cappella chorus that performs traditional barbershop tunes. The barbershop chorus entertains audiences at a number of Long Island venues, including churches, libraries, street fairs, hospitals and parks and even once performed at Carnegie Hall in Manhattan. The chorus’ breakout quartets sing at concerts and at private parties, anniversaries, birthdays and Valentine’s Day for a fee.

Barbershop singing is one of America’s oldest musical genres, said Jennifer Hart, adjunct associate professor of drama and dance at Hofstra University, who has managed the barbershop quartet at Disney World in Orlando, Florida.

“Harmonies were sung in barbershops and on streets, and they began their performance roots in the minstrel shows of the mid-1800s,” she said. “Today, the barbershop is generally a reminder of the good ol’ days, but most people still love barbershop for its ability to blend the human voices into one.”

The chorus sings a variety of music, including show tunes, traditional songs and pop songs, averaging about 10 performances a year. For the most part, concerts are free, though tickets for its annual show are $15.

Some of the group’s traditional songs, popular between 1899 and 1930, are given new life in the barbershop chorus. “We sing a lot of old songs because the structure of the music lends itself to four-part harmony — tenor, lead, baritone and bass,” said Maurice Debar, music director and conductor of the chorus. “Today’s music doesn’t lend itself as well to barbershop. But the themes of our music — which are love and loss, patriotism and family — are relevant today.”

Nevertheless, Debar, a retired music teacher who worked in many districts, said he has been adding “more modern” tunes to the repertoire, such as “Can You Feel the Love Tonight” from the Broadway show “The Lion King,” and music from such rock groups as The Beatles because “the current generation of barbershoppers grew up in the 1950s and ’60s,” he said. “The average age of our members is 72.”

Twelve years ago, when he retired from his patient-monitoring company, Howard Bailin, then 65, traded his suit and tie for the uniform of the Long Island Harmonizers. Having grown up in the ’50s, Bailin, a tenor, initially searched for a doo-wop group, but “found that with barbershop, I can get the same sort of appreciation from the music and hear those chords, but in a different, more complicated style,” said the Plainview resident, now 77. “It’s nice when the guys get together, sing and make music, when they hit the chords, it sends chills up your spine.”

A workout for memory

Although Bill Ruth, 88, of Carle Place, has been making music with the chorus for nearly 45 years, memorizing the lyrics sometimes can be a “personal challenge.”

“I commit the words to index cards, and when I go for a walk, you’ll probably see my lips moving because I’m trying to memorize the words,” said Ruth, a retired NYPD detective and great-grandfather of 12. “But when you have it memorized and you are singing together, it’s a feeling of accomplishment and a thrill to perform in front of people.”

For member Mark Head, 57, a former church cantor for two decades, learning music comes easily. Head, of East Meadow, who joined the chorus in February after seeing the group perform at a holiday concert in a hospital, said his mother taught him how to sing and read music as a child, “which is important when singing a cappella,” he said.

The Long Island Harmonizers provide Head an outlet that differs from spiritual singing and transports him to a time when he was “younger and immersed in the a cappella experience.”

Head may be one of few barbershop singers in the group who knows how to read music, said Debar. To help speed up the process of learning a new song, Debar said he offers members a CD with a rendition of the tune for each musical part. “You have to sing on pitch, and you have to have the desire to learn the part and study,” he said.

In addition to encouraging the chorus members to breathe properly and recite the lyrics in a singing tone, he stresses the importance of stage presence and commanding the attention of a theater audience. “We don’t want the guys to stand there with eyes glazed over,” he said. “They have to sway or move their hands. The men have to remember the words, the notes and then I’m adding another layer -- to move.”

But all that disciplined work is worth the effort, says chorus president Miraglia, since singing in a chorus improves health and wellness. And experts agree.

Good for the brain

“A number of studies have found that singing in groups boosts immunity by increasing salivary immunoglobulin [antibodies],” said Dr. Christopher Christodoulou, a clinical and research neuropsychologist at the Stony Brook Center of Excellence for Alzheimer’s Disease. Singing may keep the brain young. “One study found that people with dementia who participated in a singing program scored better on memory tests than those who did not,” he said.

Member Ruth said the group has been a boon to his retirement years and he appreciates the social connections of the chorus. “Every Tuesday, four or five of us go out to a golf course in Suffolk to play, and we sing barbershop in the car on the way out and on the way home. People stare at us,” he said with a laugh.

Bailin also reaps the benefits of the chorus. “They have a nice bunch of guys,” he said. “We go out to dinner a couple of times a year, and we socialize with individual members.”

Debar said barbershop music “appeals to everyone at a certain time,” but acknowledges it generally attracts older audiences.

One such fan, Kevin McNamee, 72, has been following the chorus for the past three years. He says he relishes hearing the familiar music his parents used to sing along to and especially enjoys the barbershop quartet.

“The older numbers resonate with me,” said the retired Wantagh resident, “and there are not many places where you can go to listen to that kind of music.”

WANT TO SING WITH LI HARMONIZERS?

Attend one of the chorus’ Tuesday night practices at Faith Lutheran Church, 231 Jackson Ave., Syosset, at 7:30 p.m. in the basement meeting room. Enter through the church’s back door. “We’re not looking for [Luciano] Pavarotti,” said Maurice Debar, the music director of the chorus, referring to the late Italian opera singer, “or superstar singers, you just have to love singing.” For more information, go to longislandharmonizers.org or call Debar at 631-587-8694.

Retro restaurant-arcade opens in Levittown
Kickstart the holidays with these events happening on LI
10 events, things to do this weekend on Long Island
Decorate your home with unconventional holiday wreaths you can make or buy
Events by night to celebrate Hanukkah on Long Island
New LI restaurant debuts 9-course, ever-changing tasting menus
Didn’t find what you were looking for?