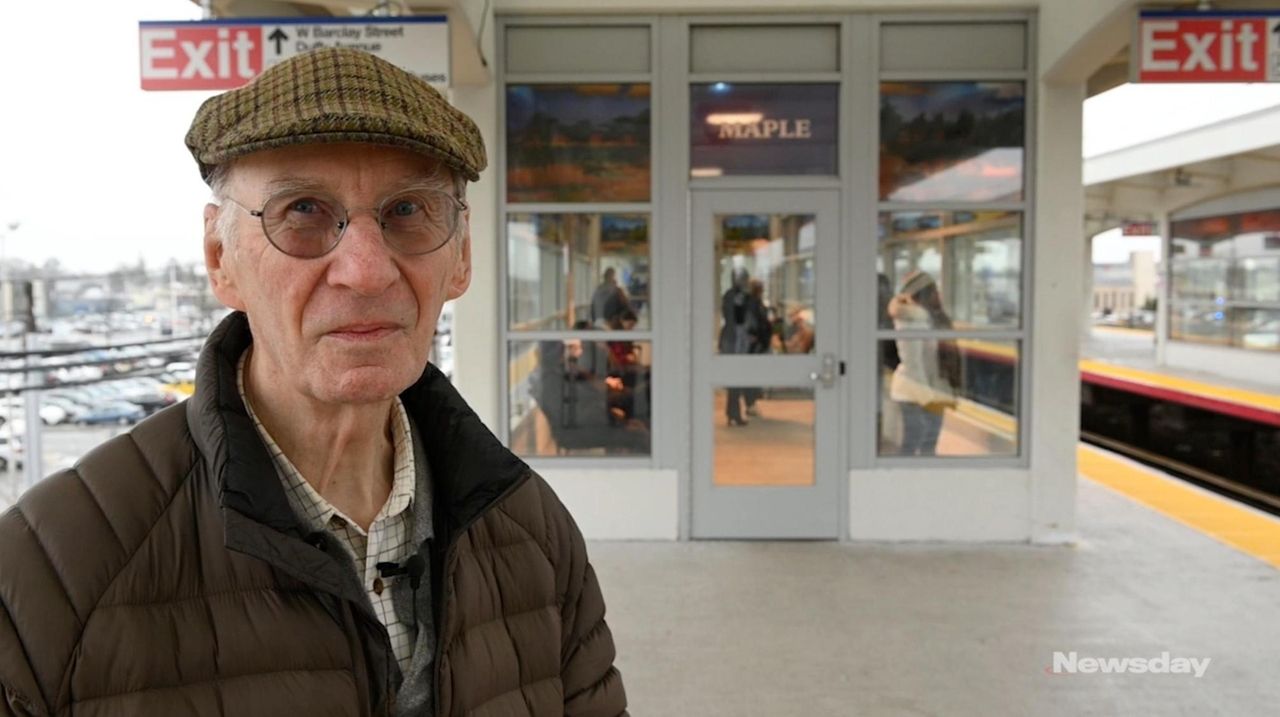 Artists can find inspiration in the most unlikely places. For Roy Nicholson of Sag Harbor, that place has been the Hicksville Long Island Rail Road station.

Long Island history, in particular, the days of the 1800s when Hicksville and neighboring areas were primarily prairie land, formed the basis of Nicholson’s two mosaic murals “Morning Transit, Hempstead Plain” and “Evening Transit, Hempstead Plain” that were installed in the Hicksville station’s ground-level waiting room in 2002. The striking 7-by-33-foot artworks — one side blue to represent the morning sky, and the other orange for dusk, each accented with a streaking effect — fit Nicholson’s vision for commuters to imagine a train’s swift horizontal movement through the landscape.

Based on the success of his commission, the project was expanded to the platform level as part of the $121 million renovation which included glass and mosaic. Hoping to make the sometimes long waiting times for trains a little more pleasant, the station’s four platform waiting rooms have been completely revamped with the focal point in each being Nicholson’s colorful laminated glass art that serves as a continuation of the previous installations.

“Everything in the artwork is about where we are,” said Nicholson, 76. “The train is going east and west. One color is evening colors and the other morning colors. Glass has a different quality than mosaic. It’s a little more abstract, a little more airy, more about the sky.”

Each room also features two paintings on each side of the door to represent the landscapes and the trees, he said. “Roy was actively engaged in all of the processes, spending time with the fabricator at their studio [in Paderborn, Germany], meeting with the engineers at the site, and developing solutions to accommodate his vision, such as naming each waiting room after a tree species” that lived on the Hempstead Plain in the 19th century, said Lester Burg, deputy director of MTA Arts & Design.

The four areas — the Cedar Room, Maple Room, Oak Room and Sumac Room — are each 50 feet long, and Nicholson’s work is spread across three plates of glass along the top on each side. It was a five-year process, one that was delayed by a change of contractors. “You can’t install something if you don’t have the room there,” he said. “We couldn’t do it immediately because we needed accurate measurements. One waiting room is an inch longer than the other and the glass had to fit in an exact spot.”

Before submitting his proposal, Nicholson steeped himself in learning as much as possible about Hicksville and its history. “One of the things that is important for public art is to remember the context of the building,” he said. “So I did a whole lot of research."

He started by delving into the history of Hicksville, which was named for Valentine Hicks, a shipowner and businessman whose family hailed from England. One branch of the Hicks family settled in Jericho and the other in Westbury, home to the Hicks Nursery, established by Isaac Hicks in 1853. Valentine established Hicksville in 1834 when he bought some prairie land and formed a land association with others. The Hicksville LIRR stop was created three years later.

Such historical details enriched Nicholson’s proposal among a highly competitive pack. When it came time for the MTA to choose an artist, it was no contest.

“The selection committee thought that Roy’s proposal of the landscape seen from a moving train, at dawn and dusk, was the best fit,” Burg said. “It addressed place, but in a historic view of the landscape and one that evokes the romance of train travel with the unfolding vistas seen from the window.”

That effect hasn’t been lost on regular commuters such as Ididah White, 22, of Farmingdale. “I was thinking they must have gotten this from some very fancy store,” she said of the art in the Cedar Room. “It definitely reminds me of night and day — getting on in the morning and getting off at night.”

It also serves as a sort of tourist attraction for out-of-towners like Rufina Amalrad of Morgantown, West Virginia, who was headed into Manhattan with her husband and two small children. “I noticed it and thought, in the summer it’s going to look beautiful in here,” she said of the Maple Room. “I’m sure the sunlight will create gorgeous colors.”

Burg could give her a definitive answer. “I saw the installed work on a summer evening when the sunset was lined up with the windows and it created an immersive environment and visual experience, which is great to have in a waiting room,” he said.

Nicholson’s ability to channel Long Island history into his artwork is all the more impressive given that his roots are about 3,000 miles from here. Born in Cambridge, England, Nicholson was raised in Aberdeen, Scotland, until he was about 12, when his family moved to London. “I had a broad Scotch accent when I was a kid,” he said.

From the start, though, art was his calling. “I knew I wanted to be an artist when I was 6. It was the only choice really,” he said. In London, his love of art flourished when studied at the Hornsey College of Art. He came to the United States after getting a scholarship to the Brooklyn Museum Art School, where he specialized in painting and ceramics, skills that both came into play doing his glass installation.

“Ceramics was quite helpful because the glasswork is hand-painted and the colors don’t look anything like they do when they’re fired,” Nicholson said. “Red is almost brown when it’s painted on, but when it’s fired, it turns this bright, bright red. Ceramics helped me know about how the fire is going to react.”

He also found a different kind of spark at the Brooklyn Museum Art School — it was there that he met Helen Harrison, his wife of 52 years who is also an artist and director of the Pollock-Krasner House and Study Center in East Hampton.

In addition to his public works (he has a mosaic installation at Union Station in Los Angeles), 12 of Nicholson’s prints were featured in the “Solar Impressions and International Masters/Collaborations in Printmaking” exhibit that ended last Sunday at Southampton Arts Center. He also has a landscape on display in the “Locally Sourced” exhibit devoted to artists connected to the Town of Huntington on display at the Heckscher Museum of Art through March 15. At home in Sag Harbor, he can often be found working in his studio.

Still, his biggest audience has to be the thousands who take the train at the Hicksville station each day. And he takes great pride that people are noticing his work. “A friend of mine called me the other day and said he had just been speaking to a friend who calls him once or twice a year. When she called, my friend said ‘It sounds like there’s a train near where you are.’ She said ‘Oh, I’m sitting in this incredible waiting room.’ She was in Hicksville,” said Nicholson. “That was just wonderful.”