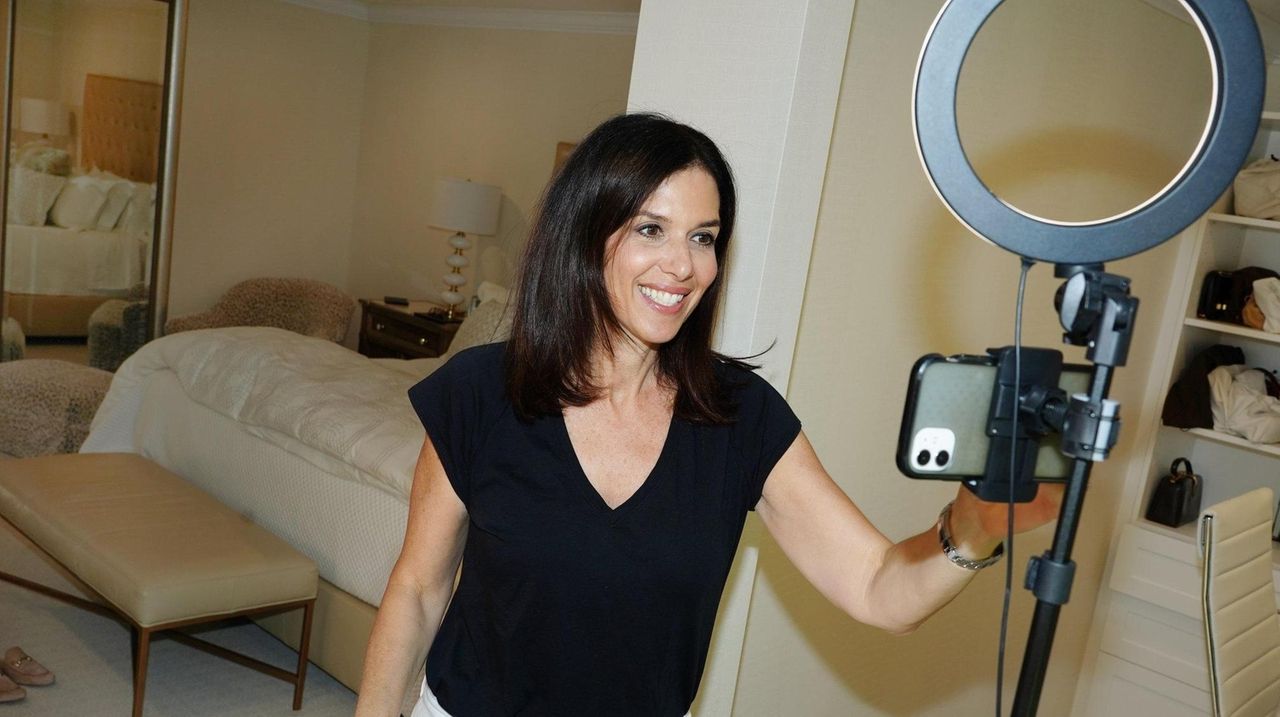 Kelly Grunther of Roslyn Heights never thought she would be a model. Then a business associate convinced her to send headshots of herself to a modeling agency. Credit: Debbie Egan-Chin

While fashion industry veterans Crawford, Iman and Hutton are reigniting their careers, many Long Islanders age 50-plus are breaking into or returning to modeling as the demand for mature faces to advertise consumer goods grows. Proving age is just a number, they are bringing their timeless beauty to magazine spreads, TV ads and digital marketing spaces as advertisers increasingly court older consumers with significant spending power.

"Before the pandemic, it was all about youth driving the online business, but as soon as the pandemic hit, it became universal across the ages, with the biggest growth coming from that 50-plus crowd," said Marshal Cohen, chief industry analyst at NPD Group in Port Washington. "Marketers are realizing that if you want the older market to relate to your product, then don’t show them an 18-year-old," he added, "Show me a person who is like me."

"Marketers have awakened to the fact that a whole other segment of the population needs clothes, food and wants their homes to look well," he said. "Age inclusivity [in modeling] is due in part to a broader social change, but it’s really a matter of economics."

According to the Bureau of Labor Statistics, there are an estimated 2,350 professional models in the United States, many of whom are independent contractors and often represented by agents who generally deduct a 20% commission from their earnings. There is no data available on the number of mature models, who typically specialize in fashion and lifestyle, which captures images of models performing everyday activities.

Briana Lombardo, who runs Long Beach-based Long Island Models, where nearly 20% of her clients are 50 to 65 years old, says sometimes she doesn’t have models who are "old enough." "Some of these marketers want models 75 to 80 years old not only for commercial shoots, but fashion and cosmetics, as well," she said.

While marketers want mature models to look relatable to older consumers, experts recommend that those who decide to "go gray" still need to look youthful.

For 30 years, at the first sign of silver strands and wiry locks, model Ellen Weinstein would dash to the salon to color her roots. But when she broke into modeling shortly before the pandemic stay-at-home orders, she decided to go gray. "I let my hair go silver and platinum," said the Long Beach grandmother who wears a dress size 4. "The gem is my hair, and it’s gorgeous."

Since Weinstein, who keeps fit with ballroom dancing, pickleball and biking, signed with Long Island Models, she has appeared in digital and print ads for G2D Group, a real estate developer in Huntington, and IT Cosmetics, a cosmetics and skin-care company in Jersey City, New Jersey.

She says that modeling at this stage of her life is "an amazing thing to be able to show my children" and that they "can aspire to be like me when they reach my age." "Being an older model says I can be sexy at 64," said Weinstein, who looks forward to retiring from her flooring sales job in a couple years to focus on auditioning for modeling roles.

Kelly Grunther, 54, a statuesque Roslyn Heights mother of two, broke into the industry in 2016 when a business associate convinced her to send headshots of herself to a modeling agency. "Out of the 10 agencies, two accepted me right off the bat," recalled Grunther, a fundraising and marketing executive. "I thought, ‘That was easy.’ It’s not," she said. "It was beginner’s luck. I was what they were looking for at the time."

Nevertheless, the brunette has been featured in a string of TV commercials, including Aruba Tourism, the telecommunications giant Comcast Corp., Pfizer Inc. in Manhattan, Nicolock Paving Stones, headquartered in Lindenhurst, and Huntington’s Canon USA.

She admits that juggling a demanding career and modeling, which she calls "a very fun and time-consuming side hustle," was a struggle until the pandemic began, making prerecorded video auditions or "self-tapes," commonplace. "It’s easy now," she said. "You don’t have to commute two hours [into Manhattan] to a casting director’s studio, wait hours for your turn, and leave."

Tom Stagnitta, left, self-tapes an audition for a hospital in Albany, auditioning for the role of a patient at his home. I’m in a very happy place,” said Stagnitta, reflecting on his newfound success, which includes roles in commercials. He stays in shape working out in his home gym. | Newsday Photos / J. Conrad Williams Jr.

While Grunther and other models say auditioning during the pandemic has been convenient, they complain that the work is unpredictable, with casting directors often requiring virtual auditions with little turnaround time.

Proving that age is no limit, some models who kicked off their careers decades ago have found their way back to the cameras and bright lights.

Though modeling was always an interest of 57-year-old Tom Stagnitta, as a 20-something he would "laugh off" his uncle’s suggestions that he break into the industry because he resembled Frankie Avalon, the former actor and teen idol. "I wasn’t confident in myself then," he recalled.

When he turned 33 in 1997 and was working as a butcher for a local grocer, an ad in the Daily News for a Manhattan modeling agency caught his eye. Within weeks, he was posing in TV commercials for The Plaza Hotel and Visa. After he was married in 1998, he stepped away from modeling to settle down and raise a family. When Stagnitta retired from the butcher shop in 2018, he decided to make a modeling comeback.

Since signing with Long Island Models, Stagnitta, who lives in Merrick and sports a salt-and-pepper mane and a toned physique, has landed several gigs. Earlier this year, Stagnitta, whose stage name is Tom Staggs, appeared in TV commercials for Farmingdale’s Stoler Lexus and Westbury Toyota and struck poses in catalogs and digital ads for First Manufacturing Co., a motorcycle apparel and gear retailer in Oceanside. Last year, he appeared in a digital video advertising merchandise for the singer Billy Joel and was in a photo shoot for G2D Group.

"It [modeling] is so much fun … I’m in a very happy place," said Stagnitta, reflecting on his newfound success.

“My son is proud that I returned to modeling,” said La Veda Davis, who in her 20s and 30s stomped the catwalk in Miami, appeared in commercial spots for Isotoner gloves and had a role in “Miami Vice.” One of her hobbies is making jewelry. | Newsday Photos / J. Conrad Williams Jr.

As a 20- and 30-something in the 1980s and ’90s, La Veda Davis, now 56, stomped the catwalk in Miami, appeared in commercial spots for Isotoner gloves and played a minor role in the former hit-TV show "Miami Vice."

But once the modeling roles stopped coming, she says she "gave up for a bit" and worked at a college library until she found behind-the-scenes work photographing novice models in South Beach, Florida. By 2018, she decided to move to New York and give the modeling and acting business "one last college try."

Since relocating, Davis has been featured in an ad for IT Cosmetics and a TV commercial for Melville-based RebuildNY.com, a homeowner assistance program, in which she portrayed a nurse who had problems paying her mortgage during the pandemic. She says she is also auditioning for several acting roles.

"My son is proud that I returned to modeling," said Davis, who lives in Oceanside. "He’s happy that I’ve finishing what I started."

Experts say breaking into modeling is not as easy as it looks, except for Kyle Merker, 59, of Water Island, Fire Island, who fell into the industry by accident.

Around 2012, the retired chief financial officer, who grew up believing he was German, began researching his family tree through Ancestry.com and discovered that he was instead a descendant of a Scottish royal family. Then in 2015, when the online genealogy company sent a mass email to its members asking for "interesting discoveries" about their ancestors, Merker responded. After a FaceTime interview and a quickly arranged audition with an Ancestry.com casting director, Merker was on his way to Los Angeles to tape a commercial, which he says has aired nationally more than "22,000 times."

"It [modeling] all started because I had made the Ancestry commercial and it was serious fun," said Merker, who serves as the assistant chief of Fire Island Pines Fire Department. After that fateful assignment, he contracted with a Manhattan modeling agency and started building a portfolio, landing jobs with the likes of Walmart, Quest Diagnostics, a global provider of clinical lab services, and Peter Manning, an online luxury men’s apparel company in Manhattan.

"I do well [in modeling] because I look like the guy who lives down the block who you borrow a lawn mower from," he said. "I can also look like a lawyer, doctor or priest. And as I get older, I’ll look like the father of the bride and play the patient instead of the doctor."

On Long Island, he has been featured in TV commercials for RebuildNY.com and digital ads for Discover Long Island, a tourism promotion agency and Daniel Gale Sotheby International Realty in Cold Spring Harbor.

"The great thing about this business is that I can work when I want, and I don’t have to worry about the rent or putting food on the table," said Merker, who is enthusiastic about his success post-COVID-19. "Advertisers who were thinking about doing something during COVID, are doing it now. Everything is picking up."

Fire Island resident Kyle Merker, left, became a familiar figure in Ancestry.com commercials portraying his discovery that he wasn't German. Since then, he has appeared in various commercials; at right, he auditions in June at the recording studio associated with Ampersand Marketing in Patchogue. | Photos by Ancestry.com; Newsday / Steve Pfost

Getting in front of the camera

If you think you have what it takes to break into modeling, experts recommend these steps for getting your foot in the door:

Ruth's Chris Steak House to open two locations on LI
New food market promotes East End bounty, interest in local food
How to make classic French onion soup
Kickstart the holidays with these events happening on LI
10 events, things to do this weekend on Long Island
LI restaurants open for Christmas, Christmas Eve
Didn’t find what you were looking for?