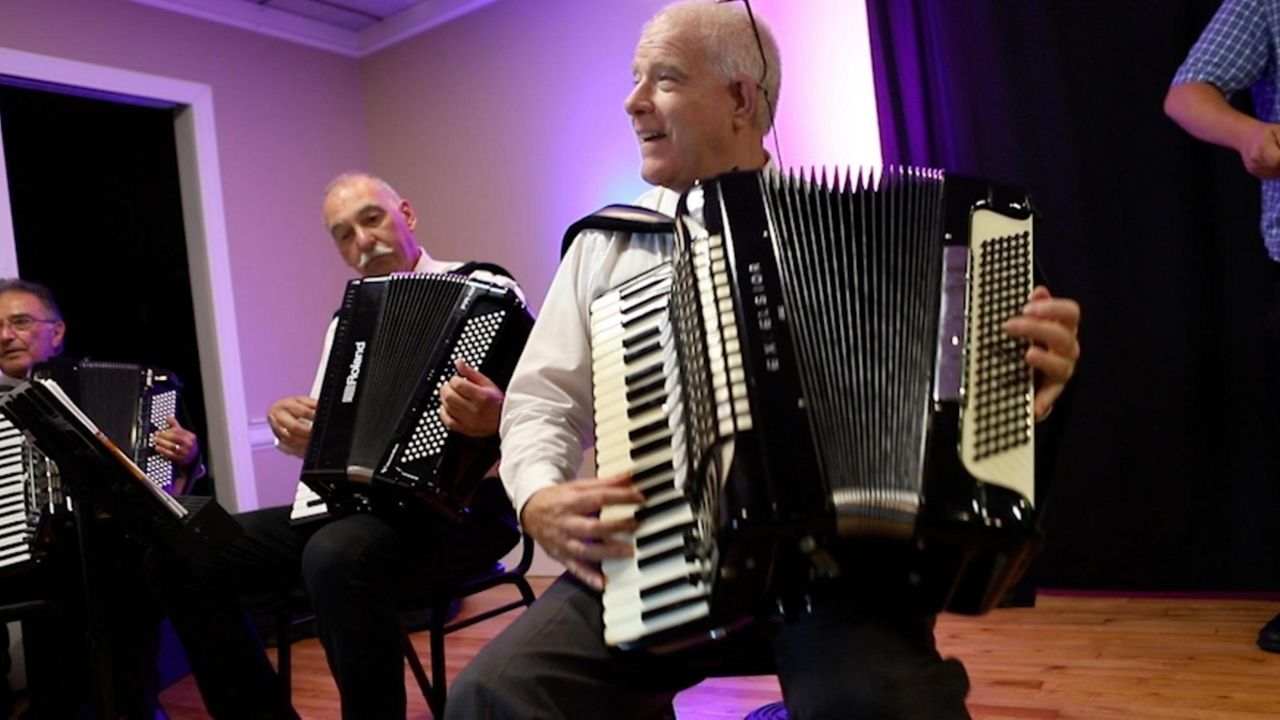 In 2010, Dominic Karcic, founder of the Long Island Accordion Alliance, brought together eight accordionists to play once a month. The group has blossomed to 15 and now members get together and perform the first Wednesday of each month at a restaurant in East Northport.   Credit: Linda Rosier

Jeanne Eriksson wants to keep squeezing as much life out of the accordion as she can. And she's doing it with a little help from her friends, including her bandmates in the group SmörgåsBandet, with whom she's even played a Beatles tune or two on the accordion.

Eriksson, 67, of Shirley came up with idea to host last month's first Accordion Summer Jam at the American Legion Hall in Huntington as a celebration of the venerable instrument. In addition to her band, which includes fellow accordionist Wayne Söderlund and her son, Chad Widman, on drums, she invited members of the Long Island Accordion Alliance and the Amazing Accordion Kings to entertain the crowd of about 80 accordion aficionados on hand.

The answer becomes clear when the crowd gets on its feet as the Long Island Accordion Alliance plays a tarantella, the folk dance that originated in Italy. Accordion music clearly is no longer just about polkas. At Summer Jam, for instance, there was no "Lady of Spain" but there was ABBA's "Dancing Queen," along with tunes by a musical who's who, including The Who ("Squeeze Box," naturally) and Sinatra standards.

"The accordion's a dying art? I don't think so," Jeanne Eriksson said. "Take a look at Bruce Springsteen’s band or Billy Joel. They have an accordion. Listen to commercials. How many times do you hear an accordion in the background?"

Eriksson hasn't been alone in bringing about what she calls a renaissance of the accordion. Dominic Karcic, 76, of Commack, has been playing since he was 10. You might even say that back in the 1940s and early '50s, it was what all the cool kids were playing.

“Years ago, it was the instrument,” he said. “The accordion was king. When I was a kid if you went to a wedding or a dance, the accordion was there. It was part of our culture.”

It was something that Karcic felt was becoming forgotten, especially by the 1960s as the guitar and drum-driven sound of rock by Elvis Presley, The Beatles and the Rolling Stones dominated AM radio. And it was a musical style he thought people needed to become acquainted with again.

In 2010, Karcic came up with the idea of starting the Long Island Accordion Alliance. He invited a few accordionists he knew to get together, play and socialize. Then they told a few friends, and soon the group that had started with about eight members has blossomed to 15 who span in age from 55 to 92. Now various members of the group get together and perform the first Wednesday of each month at La Villini, a restaurant in East Northport.

For some of the members, it was an opportunity to pick up the accordion after many years. "I started playing in 1943," said Bob LaBua, 82, of East Northport, who joined the Alliance eight years ago. "Then I got married with four kids and had a hiatus. My wife bought me a new accordion when I was 60 and I played periodically, and since joining this group, I play every day."

So does Phil Prete, 92, of Bethpage, the group's senior member, who's developed quite a following on his block. "I play on my patio, and soon my neighbors come over to listen to me play."

In fact, all of the group's members said they practice anywhere from two to fours a day. "If you want to master it, it's a lifelong affair," Karcic said.

That's certainly been the case for Frank Toscano, 78, of Seaford. As one-third of the Amazing Accordion Kings, he began playing when his father bought him an accordion during a trip to Italy. "I said no way. I don’t want to play that instrument, it looks too hard," Toscano said. "When I came home, two of my friends were playing it, so I said to my father, 'I think I want to take lessons.' I've been playing for 70 years."

Toscano, who also plays piano, added that knowledge of that instrument is an asset in playing the accordion. "A lot of the accordion students that I get have studied piano. Since an accordion has a keyboard, knowing the piano does make it easier."

NOT FOR MEN ONLY

While the world of the squeezebox has been mostly a boys club, that didn’t stop Jeanne Eriksson, who sports a candy-apple-red accordion, from picking it up. In her case, she couldn’t help it. Not only was her father was an acclaimed performer, but he was also a teacher.

Yet among those hundreds of students, she wasn’t one of them. The reason was simple. "He was so busy trying to make his own career," said Eriksson, who is self-taught. "It's very hard as a musician to make that your No. 1 career. Most of these guys have another job. Dominic was my kids' music teacher."

Eriksson did have some piano lessons, which helped in mastering the accordion. And she's been able to hold her own playing with the guys. "They are very curious," she said. "My dad was such a highfalutin' professional that they expected me to play like him — and I don’t. I never actually took lessons. I play by ear. I'm like the shoemaker’s kid that doesn’t have shoes."

Seeing her perform can also serve as an inspiration to Karen Phillipson of Huntington, one of the guests as Summer Jam. As a recent retiree, she decided to start playing the accordion for the first time since fourth grade. "It makes my brain feel good," Phillipson said, "and I like the feeling that you get when you're playing. I feel happy."

If you're keyed up to hear accordion music, Long Island is the place to be. At these shows, the accordion is king.