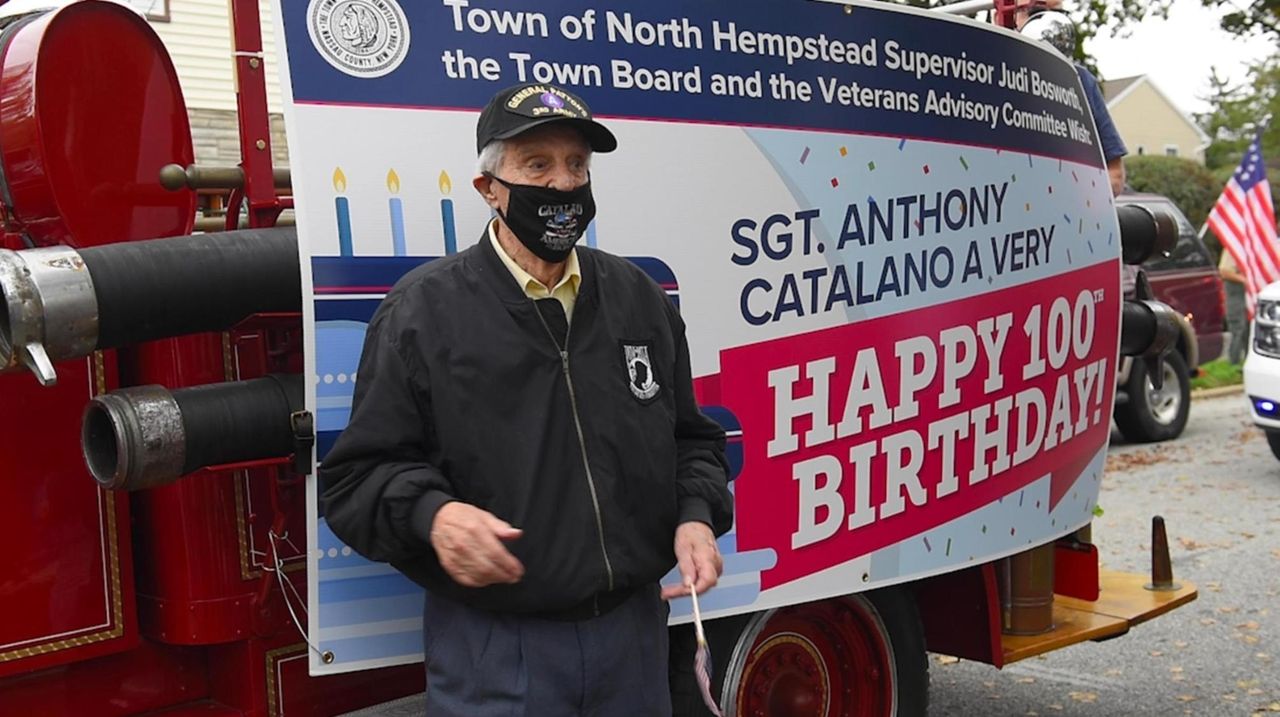 During World War II, Joseph DeCola of Lake Grove, then a sergeant in the U.S. Army Signal Corps, visited a military cemetery in Belgium, a major battlefield of the war.

A radar system DeCola’s unit developed played a critical role in ending the conflict between Adolf Hitler’s Nazi forces and the Western Allies, England, France, the United States and the Soviet Union. The radar system — which located enemy aircraft and their intended targets — may have contributed to DeCola’s survival and that of millions of others across the world. It was successfully used against relentless Nazi bombing raids during the Battle of the Bulge in the Ardennes region of Belgium.

Eighty-three days of "continuous combat" in frigid temperatures and deep snow in the Ardennes stand out in Anthony Catalano’s recollections of the war.

"I thought I wouldn’t survive," said Catalano, of Mineola, who was drafted in 1941 when he was 21. He was one of three brothers drafted. Catalano celebrated his 100th birthday on Oct. 23.

Although near the age of the 18- and 19-year-old soldiers he was leading as a sergeant in Gen. George Patton’s Third Army, Catalano said he pretty much became a surrogate father to them. He struggled to keep them alive by keeping them awake. When one of them, reacting to the terrifying sounds of German artillery bombardments, told him, "Sarge, I’m scared," he said he responded, "I’m scared too."

Unlike DeCola and Catalano, Frank Wimberley, 94, of Sag Harbor, who is today a nationally renowned artist, had a very different experience in World War ll. He was never in combat but drove trucks in convoys transporting soldiers and supplies to the front lines. Back then, like most Black men, he could only serve in segregated units of the military.

With waning memories and other frailties associated with aging, as Veterans Day approached on Nov. 11 — commemorating the end of the war and honoring those who served in the U.S. armed forces — these three Long Island veterans reminisced about their service.

Clockwise from above: World War II veteran Joseph DeCola at his home in Lake Grove in September with his Battle of the Bulge recognition document and a framed photo memento of his service. “As far as the eye could see I was the only one standing. I said, ‘why me?’ ” DeCola, 96, recalled. | Photos by Morgan Campbell

Interviewed at his home recently, DeCola noted how radar significantly impacted the war.

"Hitler was operating his bombing planes at night because he was losing many aircraft," DeCola said. "We noticed that the U.S. pilots were missing their targets. Through radar we could track [Hitler’s] buzz bombs [cruise missiles] from 10 miles away and direct the U.S. pilots to the targets where they should release bombs."

Military historians consider radar use the turning point in the Battle of the Bulge, Adolf Hitler’s last major offensive against the Western Allies. "So many of his bombers were shot down Hitler was forced to surrender," DeCola said. "It helped win the war."

DeCola earned a Bronze Star Medal, the fourth-highest award a service member can receive for heroic achievement in a combat zone.

A commendation DeCola received — along with the medal from the late Lt. Gen. E.R. Quesada (then a major general) — reads in part: "The Bronze Star Medal is awarded to Sergeant Joseph R. DeCola … Company "D" 555th Signal Aircraft Warning Battalion for meritorious service in connection with military operations as Radar Technician."

It continues: "Sergeant DeCola demonstrated outstanding capacity and skill in absorbing technical knowledge and applying it to the technical repairs and adjustments necessitated by operational demands. By his constant desire to assist in developing practices and modifications to increase operational efficiency. … Sgt. DeCola … employed radar control for tactical aircraft that reduced difficulties previously experienced in locating aircraft and recovering lost targets.

"This service reflects high credit upon Sgt. DeCola and the Armed Forces."

The commendation pleased DeCola. "That’s what they gave me the medals for," he said. And in 2015, the Obama White House recognized him on the 70th anniversary of the Battle of the Bulge.

Anthony Catalano, drafted in 1941, served as a sergeant in Gen. George Patton’s Third Army. After a 16-day voyage across the Atlantic, disembarking from a troop ship onto a landing craft in roiling seas off the French coast, was particularly harrowing for Catalano, who never learned how to swim.

"When we got to the Ardennes we were in 4 feet of snow and without winter gear," Catalano recalled. "We were stuck; we couldn’t move." To keep his troop of about 19 young soldiers awake, he said, "I told them to get against a tree and make a snow barrier. I had to wake my guys up every 21/2 hours so they wouldn’t freeze to death. I couldn’t sleep myself. If I got two hours sleep it was a lot."

When trucks were not available, the soldiers often had to slog on foot through sections of France, Belgium and Germany. "Some were getting trench foot," a painful disease caused by prolonged exposure to cold and wet conditions.

"I let them stamp their feet, clap their hands, whatever," he said.

The troops ran out of water and the military’s K-rations, which Catalano would not eat but exchanged with fellow soldiers for chocolate. For water, he instructed his men to collect snow in their canteens "to help sustain them" until supplies were replenished.

Frank Wimberley’s military engagement began as a private assigned to the 3384th Quartermaster Truck Company. Said Wimberly, "I never did any fighting. I did a lot of transporting troops and shipping supplies to areas where there was fighting." Because Black men could only serve in segregated units of the military, many were assigned to labor and service units.

Wimberley was happy with his assignment, however. "I liked that job; I liked being in a foreign country," he said. "We were very much liked by the Germans because we were Black; they liked the fact that they were meeting a different kind of American."

He said he suffered some of the hostility directed at Blacks by some whites, "even in the U.S. military," Wimberley remarked.

"The Black soldiers in my unit were always segregated from the whites. White soldiers would show animosity to us."

"You’re always going to find some problem makers, especially in the service," he said, "but I enjoyed my stay over there."

Encounters between Blacks and Germans were mostly social, Wimberley said. "A lot of the guys had German girlfriends," he said. "Everybody was poor because of the war; they would fix dinners for us. They had to go on the farms and steal food."

He described how a shared love of music fostered camaraderie among the Black soldiers. "We would form little groups," said Wimberley, who played the trumpet. "There were others who played other instruments; we would get together and play; it was always jazz."

Learning that Wimberley had an interest in art, German soldiers who were artists themselves "made portraits of us," Wimberley said. "We gave them cigarettes; they’d rather have that than money. We didn’t like the Germans because of Hitler, but some of them became my very good friends," he said.

After 18 months in the service, Wimberley was discharged. "I was so glad to get back home," he said. "I wanted to come home and see my mother in the kitchen."

His latent bent toward art spurred Wimberley to pursue studies in painting, sculpture and pottery at Howard University. From a family of musicians and artists, "I’ve always been some kind of an artist, but I got better," said Wimberley, who is represented by the prestigious Berry Campbell Gallery in Manhattan. Christine Berry, a co-owner of the gallery with Martha Campbell, said his abstract paintings are highly sought-after around the nation.

Some of Wimberley’s works are included in "Color and Absence," a show at the Southampton Arts Center through Dec. 27. He is usually busy, dividing his time between his home in Sag Harbor, his studio in Corona, Queens, and Berry Campbell. Wimberley is married. He and his wife, Juanita, have a son, Walden, a musician.

When the war ended, battle-weary soldiers, who thought the invasion of Japan would be their next assignment, were relieved. "I was beat, tired," Catalano said. "I was 23 and felt like an old man. I think I turned gray at 25. I thank [President] Harry Truman for his ending of the war."

Catalano was transferred to the U.S. Group Control Council in Berlin where he spent four years helping the occupying U.S. forces set up a German military government to restore order. "I couldn’t wait to get home," he said.

Local officials and neighbors greeted Catalano and DeCola as heroes when they came home, hailing their courage and dedication. They had suffered no injuries.

Laughing amiably when he had difficulty dredging up memories of the war, Catalano, a spry widower whose wife, Linda, died 11 years ago, remarked, "You forget a lot of things after so many years. It’s very difficult to remember." He had no children.

When he came home Catalano worked for the Federal Aviation Administration as an air traffic controller at LaGuardia Airport and the former Idlewild Airport (now Kennedy Airport). He retired in 1973 as assistant chief controller. Nazi daggers and helmets are among war memorabilia filling a room at his home.

When he returned from the war, DeCola founded North Shore Electric Contractors in Farmingdale, from which he retired in 1990. His wife, Gloria, died in 2011. He is a great-grandfather of 15. Proud of her father’s accomplishments, Lorraine McGrath, one of his three daughters, said, "My dad has always been my hero. He is a true American hero. He has never been a sucker or a loser."

Recently, the three veterans also reflected on how they felt about being sent to war.

Catalano couldn’t comprehend it. He recalled saying to himself, "I went to Catholic schools; I studied the Ten Commandments, ‘Thou shall not kill’; then I went into the Army, and they gave me a machine gun. So what do I do? Where do I go from here?"

He had been reticent about his experiences except when addressing students. "For 47 years I clammed up," Catalano said. "I went to fight for my country. I did my duty. I wasn’t concerned about medals; I don’t want any favors. I just wanted to get out of the war. I thought I would die in the service." he said.

Being in combat "meant having to kill people," Wimberley said. "No one wants to kill other people. I was very happy to be out of the combat."

DeCola said he thought World War ll would have been the war to end all wars. "I was surprised there were so many wars after World War II," he said. "You’d think it was the last war."