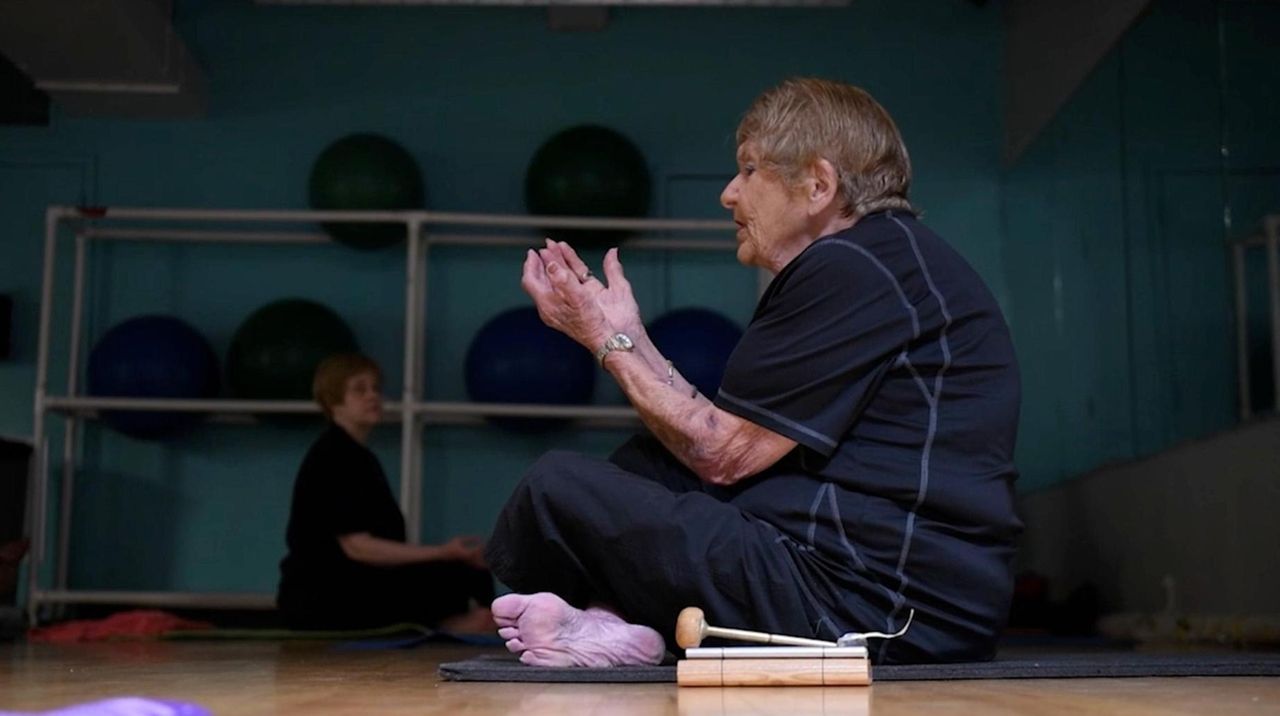 Ronnie Arond, 94, of Bellerose, Queens, talks about her love of yoga and the joy she receives from teaching.  Credit: Corey Sipkin

For some people, the dream of retiring can be an all-consuming lifelong obsession. Their only solace is the future realization of that dream: retiring someday to a life of leisure.

Then there is Ruth Gitlin, the 95-year-old president, owner and CEO of American Aerospace Controls, the Farmingdale-based electronic component manufacturer that she and her late husband, Robert, founded in September 1965.

When asked recently if she ever plans to retire, she responded, “No. Why should I?”

In the same category as Ruth are Stanley Geller, 92, of Roslyn, founder and chairman of the board of Fun World, a holiday costume manufacturer and distributor, and Ronnie Arond, 94, of Bellerose, a professional yoga instructor — all of whom get up and go to work everyday.

“We know that more people continue to work well into their 80s and even their 90s, and they each have their own rationale for doing so,” said Beth Finkel, AARP’s New York State director. “And we also know that about 1 in 4 people who have decades of experience in the workforce think they’ll never plan to retire, for many different reasons, including money, love for their job or because they need the medical benefits.”

The paths and philosophies of these three nonagenarians should inspire both young and old.

American Aerospace Controls is a certified woman-owned business, meaning at least 51 percent ownership is by a woman who holds the highest position in the company. Gitlin owns 100 percent of AAC and is active in every aspect of the company’s daily operations.

Under Gitlin's leadership, AAC designs and manufactures AC and DC current, voltage, power and frequency sensors for the aerospace, aviation (including unmanned aerial vehicles), satellite and transportation markets. Gitlin started as AAC's financial officer in 1965. At that time, it only had five employees; today there are 50.

“I can only describe Ruth Gitlin as amazing,” said Richard Glass, of Glass & Glass CPA PC of Garden City, who has known Ruth for more than 20 years. “Her business acumen and intuition are exceptional. Under Ruth’s leadership AAC has grown tremendously.”

Gitlin remembers that it was her husband Robert’s love of engineering that led him to start AAC.

“He thought in three dimensions and was always designing something,” Gitlin said. It was also her husband's desire to own a business so that he would be in control of his family's destiny. Both Robert and Ruth had degrees from New York University: Robert had a master’s in engineering management, and Ruth a bachelor’s in business.

Today, AAC supplies components to many companies, including Northrop-Grumman, NASA, The Boeing Co., Sikorsky, Rockwell, the European Space Agency and a variety of transportation authorities throughout the nation.

"We are so proud that everything we design and manufacture is done here in Farmingdale," Gitlin said.

She speaks of her marriage as the best 48 years of her life. Wed on Sept. 27, 1947, Ruth and Robert raised three children and had seven grandchildren. Today, Ruth also has two great-grandchildren.

In December 1995, tragedy hit the family. They received word that one of their seven grandchildren had died. He was 6 and lived in Salt Lake City. Two days after the funeral, her husband, Robert, died from a heart attack.

"It was sudden. I and my family were devastated," Gitlin said. "If it wasn't for AAC, I don't think I would have made it through that period."

Reflecting on the importance of AAC in her life, Gitlin said, “The company is not just a business; it was never just that.

"It is our family,” she said. “Our employees stay with us for decades. They don't want to leave."

How does she describe her philosophy of life? "Never give up."

Stanley Geller, 92, drives himself Monday through Friday from Roslyn to Carle Place to the company he founded in 1963: Fun World, a division of Easter Unlimited.

“I promised my sons that I would not drive at night,” Geller said with a chuckle.

His son Alan, 62, helps him run the company. Alan is also the inventor of the world-famous “Ghostface” mask that appeared in three Wes Craven “Scream” movies and has sold in the millions worldwide.

“The film was a massive success (spawning three sequels) and the mask has since become one of the most popular Halloween costumes ever, making Fun World quite a bit of money,” said Brian Cronin in the Huffington Post.

After serving three years in the Navy during World War II, Stanley went to Dartmouth College’s Tuck School of Business in New Hampshire for his MBA. Then he worked as a salesman at B. Altman and Co. in Manhattan. He soon married his wife, Eve, on June 29, 1952, and they had two sons, Mark and Alan. They first settled in Rego Park, Queens, but moved to Roslyn Heights in 1963.

Fun World got its start in the early 1960s, when Geller purchased S. Rosenberg’s Christmas Co., a small merchandising business, from his father-in-law. Geller’s vision was to turn the company into an international manufacturer and distributor of costumes and party accessories.

He spent most of the early years on the road all over the United States along with international travel to Japan, China, Vietnam and Europe. As the years passed, Fun World became a leader in the business-to-business market for costumes and party supplies.

“Stanley is an educated, fun-loving family man and is dedicated to his life’s work at Fun World,” said Meagan Devine-Callazo, a senior Engage Life director at Atria Independent Living, where Geller has lived for nearly a year.

The Gellers decided to move to Atria Roslyn Harbor in 2017, selling their original home. On Nov. 25, 2017, two days before their move, Eve died. They had been married 65 years.

Geller can be found golfing twice a week at the Old Westbury Golf and Country Club, his passion for the past 50 years. He has two grandchildren and two great-grandchildren.

Reflecting on his past 92 years, Geller offered his philosophy of life: “You can’t learn anything when you talk, only when you listen.”

Ronnie Arond, 94, recalls with great fondness the time when one of her yoga students vacationing in Cape Cod enrolled in yoga classes. When the student mentioned she was from Long Island, the instructor said, “I heard of a yoga instructor down on Long Island that is in her 90s.”

Arond has spent the past 40 years teaching her own style of yoga as a professional instructor at the Cross Island YMCA in Bellerose, teaching more than 25 students weekly; she also privately teaches six to eight students in the home she and Hank, her husband of 74 years, have shared since January 1951.

Arond said her approach to yoga routines and positions is unique, integrating medical knowledge gathered in 50 years of experience as a registered nurse.

“I focus on all parts of the human anatomy and mindfulness to get my students to see their inner body being healed as they do yoga,” Arond explained.

Having first dated on March 4, 1943, Ronnie and Hank were married exactly a year later. They are both veterans of World War II; Ronnie, a registered nurse who before the war worked at Beth Israel Hospital in Manhattan, was stationed at Halloran Hospital on Staten Island; Hank was in the U.S. Army Signal Corps stationed in Fort Monmouth, New Jersey.

Ronnie and Hank have two children, two grandchildren and one great-grandchild.

Mary Lardner of Port Washington said she’s been taking lessons from Arond for more than 10 years.

“Ronnie has not only impressed me as a beautiful soul and wonderful instructor who loves people, but she is also physically in the shape of someone much younger,” Lardner said.

Looking back on her nine and a half decades, Ronnie said, “It is important in life to keep learning and growing; otherwise you stagnate.”

She added, “I will never retire as long as I can still do what I love to do.”