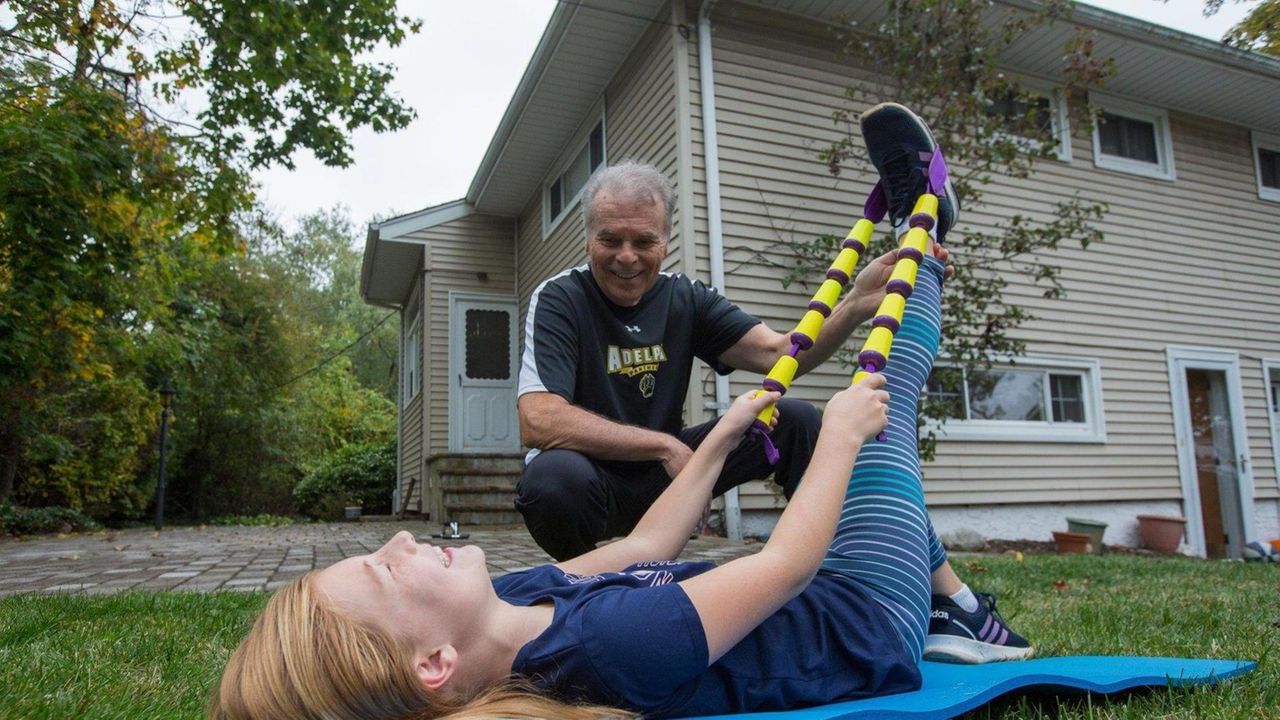 Adelphi University Professor Stephen Virgilio, co-author of the Heart Smart Program, a cardiovascular health intervention program used by schools around the country in the 1980s and 1990s, is teaching his last classes this semester, but he isn't done helping the next generation be active. Credit: Linda Rosier

Stephen Virgilio emerges from the basement of his East Williston home looking like a weekend warrior on a shopping spree. Cradled in his arms are golf clubs, pickleball rackets, a Nerf football, a kickball, pushup handles and other equipment.

"Hi!" he says brightly to his 10-year-old niece, Faith Virgilio, who comes bounding into the backyard. "Ready to have some fun?"

Faith smiles and shakes her head up and down in vigorous assent as Uncle Steve arrays the various sporting gear on the grass.

They begin loosening up by tossing the football back and forth. Virgilio gently gives his niece, who lives in Sea Cliff, pointers. First, he shows her how to use her legs to get more oomph in her passes. "Step and throw," he says, fluidly demonstrating the process. Then he shows her the proper grip. "Thumb to the side, then reach for the sky," he says, mimicking the overhead arc of a well-thrown forward pass. "Want to try?"

"Good!" exclaims Virgilio who, at age 70 (a milestone he celebrated on Nov. 8) is old enough to be her grandfather. With the death of his younger brother, Nick — Faith's dad — in March 2019, he has been spending more time with his niece.

"We're going to take an active role in her life," he said.

"Active" would be the operative word here.

Virgilio has made physical activity for children — the study and teaching of it, the advocacy for more of it — his life's work. He has a doctorate in physical education and has taught at Adelphi University since 1990.

Dr. Virgilio — as he's known to his students — has published more than 75 papers during his academic career and conducted more than 150 presentations and workshops, mostly for K-12 physical education teachers. He is also the co-author of the Heart Smart Program, a cardiovascular health intervention program that was used in hundreds of schools around the country in the 1980s and 1990s, as well as lead author of the Society for Health and Physical Educators' Active Start guidelines for young children, widely used by preschools around the nation. He is also author of several textbooks used by physical education teachers internationally.

Virgilio is teaching his last class on Dec. 18, with his retirement taking effect in August 2021. And while he may be giving up teaching graduate students, he said he isn't done teaching children how to be active.

As he shows with Faith, who has now moved on from throwing a football to doing pushups under his tutelage — "don't arch your back … very good!" he says encouragingly. Faith's eager participation in Uncle Steve's backyard play session reminds us that this is generally not a hard sell to kids — even a generation growing up in front of screens.

"It's indigenous in their makeup that children want to be active and play," he said. "That's how they express themselves. If that behavior is cemented in an early age, then as they get older, it's natural for them to think about being physically active."

"We've had more than a few conversations over the years about how to get young people to be active," said Virgilio's longtime colleague Chuck Corbin, professor emeritus at Arizona State University and a nationally recognized children's fitness expert.

And, he emphasized, it's not the oft-derided idea of participation trophies for all, or the elimination of competitive sports in school curriculum that they argue for. "There's a place for competitive sports, and neither Steve and I would suggest they're not important," Corbin said. "But physical education is not a competitive sport; it's an educational tool, with the overarching goal of getting children active and knowing how be active."

What may give Virgilio added perspective in the national debate over the proper balance between competitive sports and participatory physical activities for youngsters is the fact that he himself was an outstanding athlete.

Born in Brooklyn, Virgilio moved with his family to New Hyde Park at the age of 10. Even in elementary school, he recalled, "I was always exercising, always running, doing pushups." He played basketball and baseball at Herricks High School and was a starter on the school's 1967-68 varsity basketball team that compiled a 16-3 record; one of the best teams in the school's history, the ’67-’68 record is memorialized on his basement wall in a faded poster of the team's schedule, with the mostly winning scores handwritten.

Even as he was sinking free throws for the Herricks Highlanders, though, Virgilio had a career in mind. "I thought what a wonderful thing it would be to coach," he said, "to work with kids and help develop them."

To that end, he pursued a career in physical education, first at University of Tampa as an undergraduate, then Adelphi for his master’s and, finally, at Florida State University for his doctorate. After an 11-year stint at University of New Orleans, he was hired at Adelphi in 1990 as a professor of physical education, in the Department of Health and Sports Sciences. He became head of the graduate program in 2002, helping guide the education and molding the philosophy of a generation or two of PE teachers.

"Steve was a great professor," recalled one of those students, Rory Sherman, who earned his master's in physical education at Adelphi in 2003. "He was always there to listen and provide all his knowledge," adds Sherman, now a physical education teacher at Walt Whitman High School who also teaches in the Adelphi program. "He's a very smart individual."

And a very proud father and grandfather: While dad was a good varsity athlete, his sons were even better. Stephen Jr., now 40, was a star baseball player at the Wheatley School who went on to pitch at Providence College. Joe, 36, was All-County in both basketball and baseball at Wheatley, then played basketball at Hobart College, where he was team captain. Their father is now excited to be able to work — or should we say play? — with their children: Virgilio and his wife, Irene, have six grandchildren, ages 2 months to 8 years — as well as Faith, who Irene said, "is like our grandchild."

"It's a beautiful thing," said Faith's mom, Cathy, about their relationship as she watches her daughter and Uncle Steve, who have now moved on to volleying with pickleball rackets.

Yet, even Virgilio — who stays in shape with 3.5-mile power-walks six days a week along with calisthenics — acknowledges that keeping up with a 10-year-old is challenging.

"This is fun!" cries Faith, as Virgilio races to his left to return a shot.

"Uncle Steve is getting a workout here, too," he says, feigning exhaustion.

But while he's retiring from teaching, Virgilio hopes to keep disseminating his ideas to new audiences. After all, could someone who has devoted his career to the study of activity really stay inactive for long?

"I could see myself giving workshops for youth sports coaches," he says. "Some of them need to be reminded of the real reason for team sports."

The national guidelines developed by Adelphi University Professor Stephen Virgilio recommend that young children should accumulate at least 60 minutes each of structured and unstructured physical activity per day.

Can grandparents help achieve these goals? Yes, said Virgilio, himself the grandfather of six. He offers these suggestions for his peers on how to help keep grandkids active:

LI drive-in, outdoor movie and concert schedule for summer
New farmers market opens in Glen Cove
2:39
Honeybee Festival at the Garden of Eve
2:39
LI Honeybee Festival takes you straight to the hive
4 LI marina restaurants to check out this summer
2:16
10 events, things to do this weekend on Long Island
Didn’t find what you were looking for?