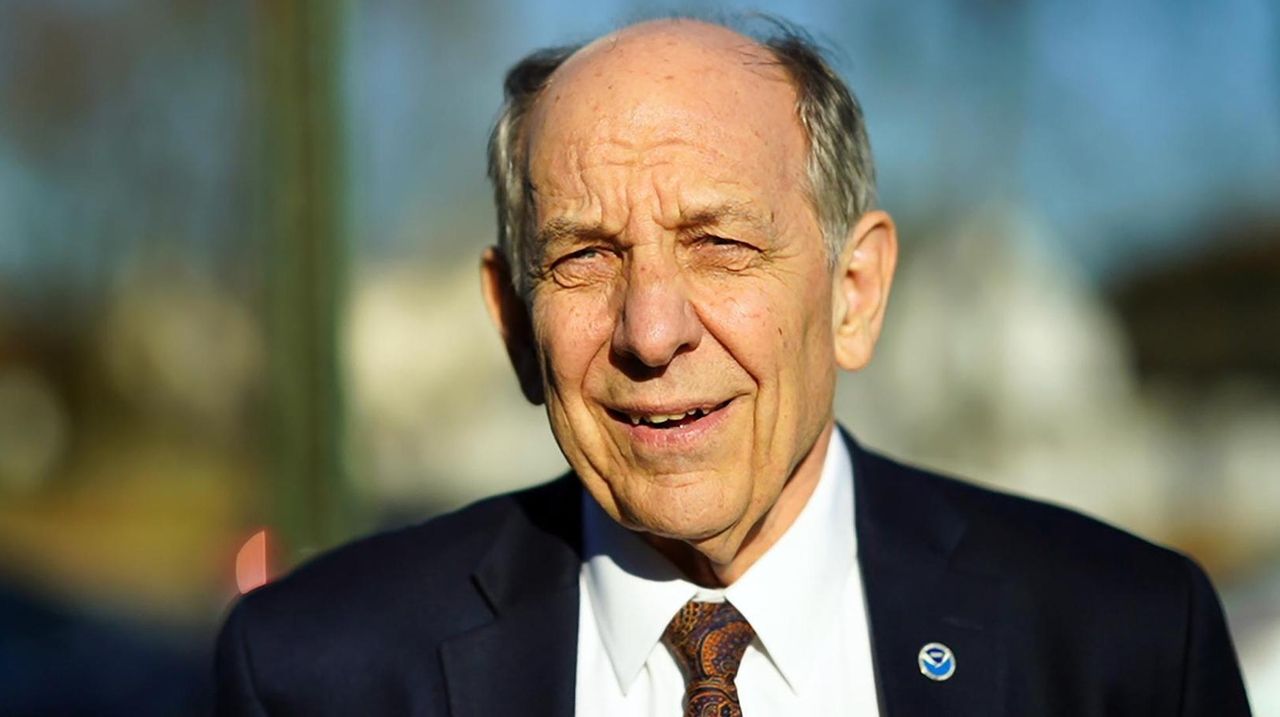 Louis Uccellini, outgoing director of the National Weather Service, takes a walk through his childhood neighborhood in Bethpage, where his interest in weather took root. Uccellini, who was honored in Bethpage on Dec. 13, 2021, retired from the federal agency as of Jan. 1, 2022. Credit: Debbie Egan-Chin; Photo credits: Howard Schnapp, Uccellini Family

Louis Uccellini credits an event in early 1961 with sealing the deal on his professional path. That was when his Bethpage neighborhood was blessed — some might say besieged — by impressive amounts of snow.

An abundance of flakes had fallen in December and January storms, but "February really was the icing on the cake," he told a gathering last month at the Nassau County Office of Emergency Management in Bethpage.

A storm that month delivered so much snow, some 24 inches, that a plow was disabled on his block, resulting in a bulldozer rumbling to the rescue a couple of days later to free the plow and the neighborhood.

"I got to tell you, that does leave an impression," he said. "So that really cemented my interest in meteorology."

Uccellini went on to earn three degrees in the subject from the University of Wisconsin-Madison, did an 11-year stint at NASA, followed by 32 years at the National Weather Service, working most recently as its director for nearly nine years.

With a nod to his leadership there, The Washington Post’s Capital Weather Gang recently credited him with having "steadied the ship" of an organization that had been "navigating turbulent times." His fixes and advances, according to the Post story, included:

Louis Uccellini, left, shares a moment with Al Blau, his former Bethpage High School teacher and wrestling coach, at Uccellini's hometown retirement celebration in Bethpage on Dec. 13, 2021. Family photos show a young Louis enjoying a snowy day in March 1956 outside his home in Bethpage and being honored in 1962 for his work as a Newsday carrier-salesman. | Photos by Debbie Egan-Chin; Uccellini Family

It’s with these and countless other accomplishments that Uccellini, 72, entered the world of retirement, with Jan. 1 his last day on the job, spent answering well-wishers’ emails well into the night.

And, even with all the awards and accolades — and his stature as a global leader in the field — Uccellini’s upbringing in Bethpage, where he once delivered this newspaper, remains close to the surface.

"This really is an arc of my life, being here at the end of my tenure as the weather service director," he told last month’s gathering, which included emergency managers, staff from the weather service’s Upton office and two high school buddies and a retired Bethpage High School wrestling coach.

"So, obviously, it's really a joy to be here in front of folks who knew me at the beginning," Uccellini said.

"I have been really fortunate throughout my career to have people around me who are smarter than me but share my passion and my desire to get that job done and get it done right," he told the group. "And I would probably argue that's what I gathered, that's what I learned here in Bethpage, not just in school but on the fields and in the home."

Also attending what was billed as a "hometown retirement celebration" was Jase Bernhardt, assistant professor of geology, environment and sustainability at Hofstra University.

He credits Uccellini with being in touch with regular folks. "He really puts himself in the shoes of the general public. I think he really understands the connection between the weather service and the average U.S. citizen, and that works."

Indeed, that’s reflected in the weather service’s push to emphasize not just weather events, but also their potential impact on the community. That includes supporting emergency managers planning their storm response, as well as area residents, say, pondering a work-from-home day instead of heading out on potentially treacherous roads.

This is part of the "Weather Ready Nation" initiative, championed by Uccellini and others, with an eye to fostering response approaches and resiliency, given the increase in extreme weather events. He cites Superstorm Sandy and the challenge of convincing New Yorkers to react "to something they've never seen before," as well as the recent drenching from the remnants of Hurricane Ida.

The effort also sees increasing collaboration with social scientists aimed at learning more about the complicated ways in which people assess and respond to weather threats.

"Dr. Uccellini appreciates how hard the social sciences are — how hard it is to understand human behavior, which is complex and dynamic, just like the atmosphere," said Julie Demuth, research scientist at the National Center for Atmospheric Research in Boulder, Colorado.

She and her colleagues have been studying ways "people’s risk perceptions evolve" as, for example, a hurricane approaches, with forecasts and news reports often updated based on the storm’s shifting track and intensity. This is aimed at finding ways to improve warning messaging.

Still, for Bernhardt, who teaches courses in weather and climate change, it was Uccellini’s deep-dive research into Northeast snowstorms that first grabbed his attention around 20 years ago while growing up in the Albany area.

As an undergraduate in college back in 2009, Bernhardt’s "first project was East Coast winter storms, and I was reading and being inspired by his [Uccellini’s] seminal work with Paul Kocin," "Northeast Snowstorms."

Those two volumes can be considered "a gold standard for weather reference books," according to a Wall Street Journal review.

Last month, Uccellini shared the story of meeting his future collaborator — Paul Kocin — while both were working at NASA. One day Kocin walked into Uccellini’s office, introduced himself and walked away with a stack of maps that needed analyzing.

"And he comes back three days later and says, ‘I can't believe they paid me to do this,’" Uccellini said. The real triple play? It turns out Kocin grew up in Syosset.

Of his early days at NASA, Uccellini also said that he "actually had the good fortune of working for the first woman to get a Ph.D. in meteorology in the United States."

That was the late Joanne Simpson, who back in the 1980s named him, then a "young scientist" and "the initiator and leader" of her NASA mesoscale group, as one of the meteorologists who had made the greatest impression on her.

Indeed, referring to her support, Uccellini told last month’s gathering that, "I would argue that that’s what allowed me to just grow in the management world…."

As Al Blau, 86, then the coach of those Golden Eagles, puts it, the 15-year-old Uccellini — a promising JV football player who had been waylaid by a broken leg — "instinctively knew what he should be doing as a manager, having never been a manager before."

"He was a regular guy," Blau said.

Then and now, he’s known for giving credit to others, "he never put himself above anyone else. He never stopped being a regular guy."

Louis Uccellini, whose work as director of the National Weather Service is credited with improving forecast reliability and communications, at Hofstra University's Hurricane Symposium in October 2018, and in December 2021 in Bethpage with meteorologist Nelson Vaz. | Photos by Howard Schnapp and Debbie Egan-Chin

In the eye of the storm

At the time, Louis Uccellini says, he thought he might get fired.

That was back in 2019 when he was dealing with two storms, one the powerful Hurricane Dorian and the other political, emanating from the White House.

Then-President Donald Trump had tweeted that Dorian was a threat to Alabama, while the National Hurricane Center was saying otherwise.

Shortly after that, in response to public concern and not aware of who had put Alabama in the crosshairs, the National Weather Service’s Birmingham office tweeted that their state was in the clear, setting the stage for what would become known as #sharpiegate.

That’s as, a few days later, Trump displayed a version of the track altered by a Sharpie marker, making him appear to have been correct.

Pressure from the White House, it was later found, was put on the weather service’s parent, the National Oceanic and Atmospheric Administration, which in response issued an unsigned statement supporting the president and reprimanding its own forecaster in Birmingham for tweeting otherwise.

Uccellini said he received a courtesy call tipoff ahead of that. "So we had to track [the Alabama office chief meteorologist] down through his personal cell to assure him that I had his back," he recently told The Associated Press.

"I wanted the Birmingham office (and actually the entire country) to know that I, and the rest of the NWS leadership team, had their backs; that we knew they were applying sound scientific principles and doing their jobs with distinction …," he told The Washington Post.

Coincidentally, Uccellini was scheduled to speak a few days later at a weather conference in Alabama, where, without mentioning "president" or "White House," he thanked the Birmingham meteorologists, saying they were in the right.

"I was prepared to be fired for challenging the White House," he told AP.

Instead, he got a standing ovation for speaking out and upholding "the integrity of the forecasting process," the Post reported at the time.

After 32 years at the National Weather Service, we imagined Louis Uccellini’s schedule might look a little different after retirement. So we asked him.

What’s on your calendar in early 2022? Right now the calendar is empty. No planned trips, conferences, budget meetings.

Are there special pastimes you’re looking forward to? Back to the garden, and a bit more bird watching and just getting back to experiencing familiar natural wonders — like snow — appreciating the wonder of it all, recalling the passion and almost spiritual joy we all felt (and many people of all ages still feel) anticipating and experiencing the snowstorms when they occur. Read Mary Oliver's poem "Walking Home From Oak-Head" to feel what I mean.

What’s on your reading list? Histories, biographies, perhaps poetry; I did a lot more reading along those lines before taking on this job nine years ago.

Along with a chance to relax and regroup, what would you like to contribute to the weather community? With Paul Kocin, I'm thinking about, and mapping out, Vol. 3 of "Northeast Snowstorms." This would be a huge undertaking, so I’m approaching this carefully.