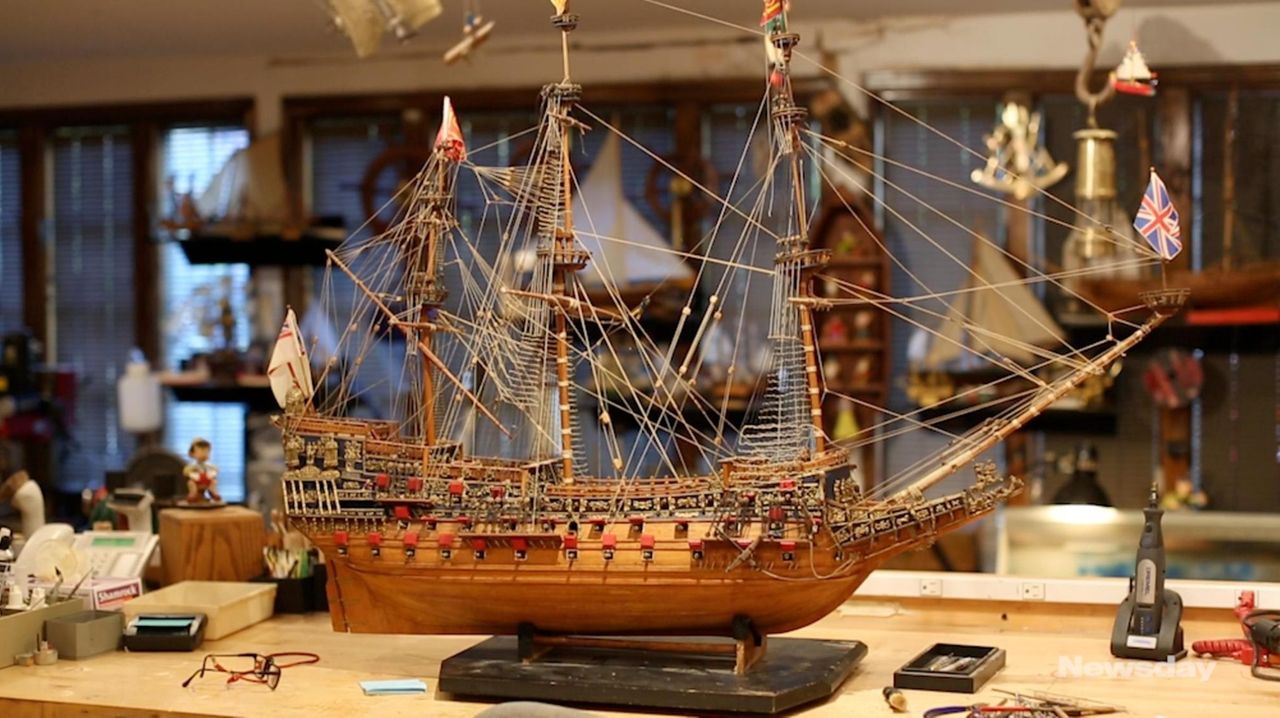 On Dec. 26, Jack Pesso explained how he rebuilt his collection of model ships after superstorm Sandy destroyed his fleet.  Credit: Yvonne Albinowski

Powerful storms wreak havoc on people’s lives, forcing them to pick up the pieces and gradually move on.

That’s certainly true for Jack Pesso, whose handcrafted collection of model ships was damaged in October 2012 in the aftermath of superstorm Sandy.

“That storm took away my life,” he said of his seven-decade-long hobby and passion for building exquisite replicas of the Titanic, the USS Constitution and other notable seafaring vessels.

Six years later, Pesso is slowly putting back together the pieces of his ships, his workshop and his life.

An artisan in rough seas

On the night of Oct. 29, 2012, the Pessos were tucked in for a typical, quiet and creative evening: Evelyn was working on a watercolor painting in her studio on the home’s lower level; Jack was in his workshop, a room away, putting finishing touches on Sovereign of the Seas, an English Royal Navy warship. They weren't terribly concerned about the approaching hurricane since they had never been personally impacted by past storms.

“I turned to her and said, ‘Everything is perfect. I don’t want for anything,’” recalled Jack, 83.

Suddenly, the spell was broken as water seeped in about 7 o’clock that evening and began filling the entire lower level of their Oceanside home as superstorm Sandy hit Long Island. The couple frantically tried to salvage anything they could from the rising water that would eventually reach a depth of 3 feet and halfway up the stairs to the first floor.

Despite their efforts, more than half of Jack’s tools, many collected from around the world, were rusted, and exotic woods amassed over 40 years from lumberyards and museum restorations were ruined.

After the storm, workers moved his three dozen intricately crafted ships, which range from 18 inches to 4 feet long, to higher ground and in the process about half were damaged.

“It took a piece of my heart out. So many hours of work and so many tools were damaged,” Jack said, adding that he didn’t have the heart to throw away anything, even the rusted, unusable implements.

While their house near Middle Bay Country Club was being restored, the Pessos lived in a hotel for a year. Since they've returned home, Jack has begun the laborious process of repairing the broken masts and rethreading broken rigs, gradually restoring the creations so dear to him. To date, none have been completely restored.

It was a three-day family rail trip to California that set the young Jack Pesso on a lifelong passion for building miniature replicas of ships.

During most of train ride, the then 10-year-old was immersed in building The Southern Belle, from a model ship kit his sister had given him to pass the time.

Right from the start, Pesso said, he liked “the ability to work with his hands and the way it kept me intrigued.”

During the yearlong convalescence that followed in his Long Beach home, Pesso whiled away the days building ships from the kits his dad bought him.

“All of a sudden, I had this crazy romance for shipbuilding,” he said.

“I built them because I felt like I was on the ship,” he said. “I’m not a boat lover, but I loved fantasizing about being on ships.”

Though he was physically disabled, the teenage Jack’s fantasies really took shape.

“I’d’ see myself running around the ship, flying from rope to rope,” he quipped, when in reality he couldn’t get himself “off the chair!”

In reality, Pesso doesn’t actually enjoy being at sea.

“Every time we went on someone’s yacht or boat, he had to get off,” exclaimed Evelyn. “He was so bored.”

Three to four hours a night several nights a week Pesso, who retired 20 years ago from running jewelry and other retail shops, can be found in his workshop creating, tinkering and fixing. If he’s not building a ship, he could be crafting a Lilliputian Ford Model T, stagecoach, carousel or even a dollhouse.

“My world is a miniature world,” he said.

Years ago, Pesso attended model shipbuilding clubs where people would discuss their work and give each other pointers.

“But for the most part, it’s a dying art,” Pesso mused.

Starting with a set of a ship’s blueprints from the Model Expo catalog, Pesso studies sketches of the ship. He also peruses Peter Goodwin's "Nelson's Ships: A Comprehensive History of the Ships In Which He Served" and other naval history books to learn what battles a ship fought in, its weaponry, weight and commissions, all details that help him in designing and constructing a model.

The Sovereign of the Seas, he learned, has an ironic history: It was faster and had better armor than any ship.

“It was virtually indestructible. And then a cook burned it down,” he said.

Once he’s done recreating an exact replica of a historic ship, Pesso adds his own touches — an extra flag here, another deckhand there, or perhaps fine inlaid wood on a pirate ship.

“Pirate ships don’t have that, but I thought they should,” he said of his tendency to take “artistic license.”

Every step in the process is exacting, from embossing and nailing down the wood slats to creating the patina of age on the deck, Jack said.

“You can buy slat wood for three dollars, and you can’t tell the difference,” Pesso explained. “But that’s cheating,”

Forgoing shortcuts, like pre-tapered masts, Pesso prefers instead to taper the masts with a drill, a two-hour undertaking for each one.

“If I work on a ship religiously, it will take a year or two years,” he noted, adding that using shortcuts could cut a year’s worth of work down to three months.

Just making one ship seat, which he torches, hollows out and drills in teeny holes into to simulate wormwood, could take six hours.

“It doesn’t make sense, but I do it for my own gratification. I make it look like it’s worn,” he said.

Every step along the way, from tightening and wetting the nylon thread used for rigging to using workable hinges on the cannon doors rather than gluing them shut, to preserving the wood with linseed oil — as is the practice with real ships — is painstakingly, albeit, lovingly done.

Explaining his obsession with perfection, Pesso said, “You have to be a little wacky. Sometimes I feel like gluing it and calling it a day, but then what’s the point of doing that?”

A family of appreciation

Despite his abundant talent, Pesso said he’s never exhibited his work because he doesn’t want to be a showoff.

Still, he is not immune to the adoration of his family, which includes two sons and a daughter, seven grandchildren and three great-grandchildren.

Recalling her father showing her what he was up to in his workshop, Beth Ginsburg said, “There would be blueprints on the walls behind him, and watching them come to life was absolutely incredible. The workmanship always amazed me. I remember going down in my footie pajamas and just being completely intrigued.”

Calling her dad the most creative person she knows, Ginsburg, 59, of Philadelphia, said, “It’s such a genius the way he does it.”

Ginsburg’s son, Yaacov, 27, who is currently in dental school, always loved spending time in the shop with his grandfather, helping him work on chess pieces and a dollhouse.

Pesso proudly explained that at dental school, Yaacov was once again working with the very familiar instruments — explorers, picks and pliers — that they used together.

Over the years, too, Jack Pesso’s skills have been put to household use.

When anything broke in her home, Ginsburg recalled her children saying, “ ‘Papu will fix it. Papu can fix anything,’ ” using the name they call him.

In fact, “Papu” fixed the Ginsburgs’ several thousand-year-old bowl, which dates to the Bronze Age and was purchased at an Israeli antique store, that had broken in transit into about a dozen pieces by filling the cracks with a mixture of clay and sawdust from the breakage and glue, so that the seams were virtually undetectable.

Calling his dad “incredible at building things,” Mark Pesso, 54, of White Plains, said his father's workshop, "was his happy place. His shop was so meticulous, where everything had a place and had a cubby, and it was marked and it was labeled. That’s always been his place where’s been able to escape all the pressures of life itself.”

Mark recently reached for the toolbox his dad gave him years ago to build an indoor basketball court.

"To this day, I still use all those tools for all the things that I do around the house," Mark said. "When I was putting up the basketball court for my daughter, as I was making it, I was so thankful that I had gotten and learned how to use them from my father."

Another son, Victor Pesso, 55, of Brooklyn, sees the model ships as a metaphor, "for a fascinating life, for the voyage my dad has taken in his lifetime."

Working as a project manager to rebuild Poile Zedek, a synagogue that burned down in New Brunswick, New Jersey, three years ago, Victor channels his father's efforts years ago to help relocate a synagogue for Evelyn's father's rabbi from a Queens to a Brooklyn community through extensive planning and generous donations.

"I take a lot of inspiration that my goal in rebuilding that synagogue is very similar to the kinds of things that my father has done," Victor said.

Ignoring her husband’s protestations of modesty, Evelyn praised the man and his talents.

“Everything that he does is amazing to me,” said his mate of 60 years. “He is beyond … His work is beautiful.”

Jack's tips for getting started

For those interested in model shipbuilding, Jack Pesso offers this advice:

•Go to various retail model ship catalogs to see if there's anything you'd like to build. Pesso recommends modelexpo-online.com.

•Since catalogs list ships by category of skill level, from novice to expert, search for ships at the level that's appropriate for you.

•There's no need to set up a workshop or separate workspace. "Some people build smaller ships right at their kitchen tables," Pesso noted.

•For a set of tools, Pesso recommends micromark.com.

LI drive-in, outdoor movie and concert schedule for summer
The dish you need at your next summer party
10 events, things to do this weekend on Long Island
Gilchrist's comeback arrives at Tokyo Olympics
New seafood eatery opens with plans to open offshore fish farm
New farmers market opens in Glen Cove
Didn’t find what you were looking for?