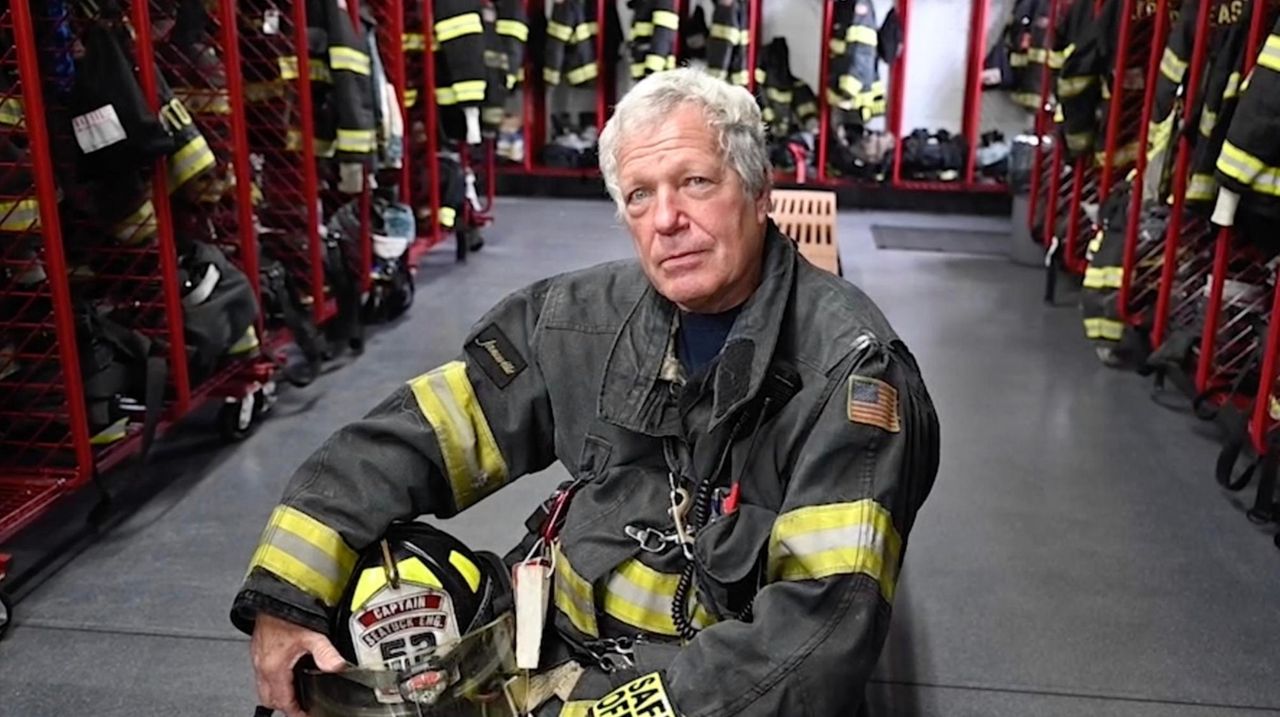 Steven Schaefer Sr., of the Eastport Fire Department, is still fighting interior fires after 40 years as a volunteer. A veteran of the 1995 wildfires on Long Island, Schaefer talks, from a safe social distance, to Newsday about his experiences and his desire to mentor newer firefighters. Credit: Newsday / Steve Pfost

John Capozzoli Jr. of Freeport remembers the moment he knew he was destined to join the fire service. He was 12 years old and riding shotgun in his father’s pickup when the Freeport Fire Department sounded its air horn. As he and his father pulled into the firehouse, he recalled the excitement he felt as he watched his father, a volunteer firefighter, don a thick bunker coat and helmet and climb aboard the fire truck.

He signed up with the Freeport Fire Department in 1958 at 18, following not only his father, but two uncles and two older brothers into the fire service.

Now, 63 years later, the 80-year-old great-grandfather, who rose to the rank of chief, still serves Freeport Village, battling house and commercial blazes. He has no plans to retire.

"I get mad when the younger guys [firefighters] want to take care of me," said Capozzoli, who fitness walks more than 20 miles a week and is the catcher for the fire department’s softball team. "I don’t want to sit in a rocking chair, and I’m not looking for it either. My heart and soul are in this department."

Capozzoli joins many active volunteer firefighters 70 and older who still answer alarms and emergency calls across Long Island’s hamlets and towns — and serve as role models for new recruits. Many remain in the ranks to reap the rewards of contributing to the welfare of their communities and relish the bonds of friendship formed in the firehouse.

Other tangible benefits include property tax reductions and a pension-like program that pays monthly stipends to members with at least five years’ service. But many firefighters say if the perks were not offered, they would still serve.

According to the National Fire Protection Association, a nonprofit in Quincy, Massachusetts, 9% of the more than 740,000 volunteer firefighters in the United States in 2018 were older than 60. In communities with a population of less than 2,500, 35% were older than 50. There are no statistics available on the percentage of the Island’s nearly 20,000 volunteer firefighters who are 70 and older.

Age mix is a benefit

As an Eastport firefighter, Steven Schaefer, 70, is among those who have been there, done that in the fire service. During his more than four-decade career as a volunteer, he has battled blazes, rescued crash victims from vehicles and doused brush fires, notably those in 1995 in the pine barrens. Since the retired operations manager of an electric company was elected fire captain by his department three months ago, his goal is to "pass the baton to the next generation."

"My quest at this time of my life is to pass on the information," said Schaefer, a grandfather of 15, who still fights house and commercial fires. "Our district doesn’t see a lot of house fires [due to strict fire codes, fireproof building materials and the installation of sprinkler systems and smoke detectors] and our younger people don’t see that. I’ve seen that. I feel lucky that I have the opportunity to share if they want to listen, that some of us older people can tell them what to look for when they go into a fire."

Schaefer is proud of the department’s efforts to recruit 12- to 17-year-olds into its junior volunteer firefighter program despite the challenges of the COVID-19 pandemic. "Meetings have been virtual and the younger firefighters are taking classes online; we’re giving them one-on-one training," he said. "We give them what they need so they can become successful and do the job safely and correctly."

While the pandemic has slowed the department’s recruiting efforts, fear of "bringing home" COVID-19 to loved ones has struck fear in the hearts of some first responders on the front lines. Schaefer, who says he does not think twice about the hazards of running 80-pound hoses into burning buildings or "bailing-out," a technique taught to safely exit a building through a window or balcony by a rope and harness, admits that the idea of catching COVID-19 "bothered him more than anything."

"We follow CDC guidelines and have PPE, and have changed our tactics and protocols, sanitizing the trucks, driving with the windows down, and having fewer people on the truck," said Schaefer, who did not contract the virus. "But, every time you go out, there’s a risk," adding, "I can’t do at 70 what I did at 20, so you have to put your head in gear before your body moves."

No matter their age, members must be in top form and undergo annual physical exams. Department policies differ, but firefighters typically have vision and hearing tests, blood analysis, cardiovascular and pulmonary exams and cancer screening, among other tests, explained Hirsch.

"Firefighting is physically taxing," he continued. "Pants, coats, boots, helmet and a tank on their backs, you’re talking 50 pounds. You get a workout just from wearing the gear. Plus, you’re pulling a hose loaded with water, which is dead weight, and you’re going upstairs or downstairs. Couple that with the fact that you were asleep in your bed at 2 a.m. and the tones go off and you get startled. Or if it’s later in the day, you might be fighting traffic to get to the fire station…this is a life and death business."

Experts in workplace psychology say shared trauma and life and death situations often faced by first responders tends to pull people together. "Firefighters have developed close bonds with fellow firefighters, and when people go through collective hardships, it brings them closer," said Nicholas Salter, assistant professor of industrial organizational psychology at Hofstra University. "I would imagine the bonds are quite close among the people doing this work."

The human connection that binds firefighters together is what attracted Ed Haran of Point Lookout to the fire service. After he returned from active military duty at age 46, he felt he was missing the "comradeship" he experienced in the U.S. Air Force and found a "second family" in the Point Lookout-Lido Fire Department. Now 72, he says the bonds of friendship he has formed during more than 25 years of volunteer service are not the only rewards of the job.

"You save a life or you’re instrumental in that happening…that’s a big reward," said Haran, who drives a pumper truck and an ambulance for the department. "They call us for water leaks or their carbon-monoxide detector beeps because the battery is low and they don’t know what to do. Often there isn’t a problem, but when there is, we prevented something bad from happening. You bring someone back that had a heart attack…that’s a good feeling."

Firefighters say the job requires a deep commitment of time and energy that often strains young families but fits perfectly into the more flexible schedules of retirees.

When G. Warren Holtje, 75, a volunteer with the Hauppauge Fire Department, is not in his bunker gear driving the fire truck to an alarm, connecting hoses to a fire hydrant or fighting a dumpster fire, he’s attending weekly, hourslong drills, where firefighters might review raising and placing ground ladders against a structure or practice operating extrication tools used to rescue crash victims from a vehicle.

The ex-chief of the department and a great-grandfather of three says his calendar also fills up with weekly department and monthly fire company meetings as well as meetings of the fire chiefs’ councils for Smithtown and Islip.

"You are on all the time…24/7," said Holtje, a third-generation firefighter. "A lot of the time when you leave the firehouse, you get an alarm and have to go back."

His wife, Carole, a member of the Hauppauge Fire Department’s Ladies Auxiliary, says she has grown accustomed to her husband’s numerous firehouse commitments. "After 46 years [of marriage], I’m used to him going out to meetings," she said with a laugh.

Five years after Joseph Stemley joined the Roosevelt Fire Department in 1980 at 41, he found his place behind the wheel of the department’s ambulance as an emergency medical technician. Now 75, the longest-serving active member of the department not only drives the ambulance but serves as the training chauffeur for the ambulance crew. "Learning new ways to train the chauffeurs and teaching them all the routes to the hospital if the main way is clogged" keeps the great-grandfather of two coming back to the firehouse.

"Everyone goes through him to learn the ropes," department chief Aaron B. Martin Jr. said about Stemley. "He’s been coming out and serving the Roosevelt community, especially during this time with COVID."

Despite the threat of coronavirus and other on-the-job hazards, many firefighters say "retirement" from the fire service is rarely mentioned or discussed. Eastport’s Schaefer said he would retire when "they take me for my last ride in the truck, when I’m in the casket," he said. "I don’t think retirement, as long as you stay active and you can answer the alarm. If not, you can still man the radio or help with something that is needed."